Speech emotion recognition plays an important role in building more intelligent and human-like agents. Due to the difficulty of collecting speech emotional data, an increasingly popular solution is leveraging a related and rich source corpus to help address the target corpus. However, domain shift between the corpora poses a serious challenge, making domain shift adaptation difficult to function even on the recognition of positive/negative emotions. In this work, we propose class-wise adversarial domain adaptation to address this challenge by reducing the shift for all classes between different corpora. Experiments on the well-known corpora EMODB and Aibo demonstrate that our method is effective even when only a very limited number of target labeled examples are provided. 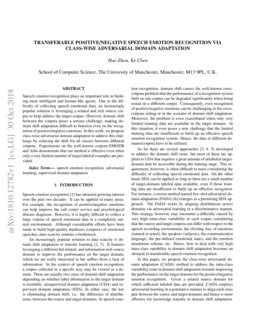 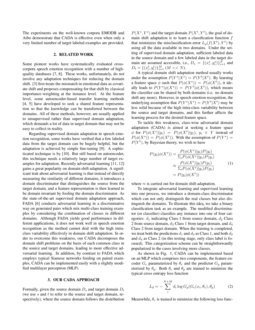 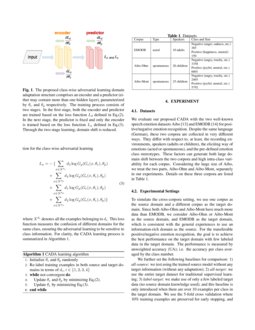 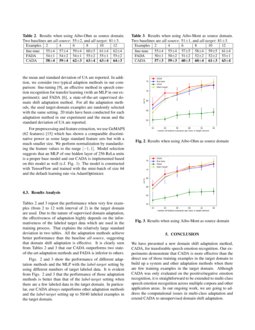 Emotion recognition from speech is one of the key steps towards emotiona...
Alison Marczewski, et al. ∙

Towards Interpretable and Transferable Speech Emotion Recognition: Latent Representation Based Analysis of Features, Methods and Corpora

Speech emotion recognition [1] has attracted growing interest over the past two decades. It can be applied to many areas. For example, the recognition of positive/negative emotions can help improve the call center service and psychological disease diagnosis. However, it is highly difficult to collect a large volume of speech emotional data in a completely natural environment. Although considerable efforts have been made to build high-quality databases (corpora) of emotional speeches, data scarcity remains a bottleneck.

[2, 3]. It features leveraging a different but related, and information-rich source domain to improve the performance on the target domain, which we are really interested in but suffers from a lack of information. In the context of speech emotion recognition, a corpus collected in a specific way may be viewed as a domain. There are usually two cases of domain shift adaptation depending on whether label information in the target domain is available: unsupervised domain adaptation (UDA) and supervised domain adaptation (SDA). In either case, the key is eliminating domain shift, i.e. the difference of distributions, between the source and target domains. In speech emotion recognition, domain shift causes the well-known cross-corpora problem that the performance of a recognition system built on one corpus can be degraded significantly when being tested on a different corpus. Consequently, even recognition of positive/negative emotions can be challenging in the cross-corpora setting or in the scenario of domain shift adaptation. Moreover, the problem is even exacerbated when only very limited training data are available in the target domain. In this situation, it even poses a new challenge that the limited training data are insufficient to build up an effective speech emotion recognition system. Hence, the data in different domains/corpora have to be utilized.

So far there are several approaches [3, 4, 5] developed to address the domain shift issue, but most of them are applied to UDA that requires a great amount of unlabeled target-domain data be accessible during the training stage. This requirement, however, is often difficult to meet considering the difficulty of collecting speech emotional data. On the other hand, SDA can be applied as long as there are a small number of target-domain labeled data available, even if those training data are insufficient to build up an effective recognizer. For instance, a recent method named few-shot adversarial domain adaptation (FADA) [6] emerges as a promising SDA approach. The FADA works by aligning distributions across domains via adversarial learning in a discriminative manner. This strategy, however, may encounter a difficulty caused by very high intra-class variability in each corpus considering that the source and target corpora can differ with respect to the speech recording environment, the eliciting way of emotions (natural or acted), the speakers (subjects), the communication language, the pre-defined emotional states, and the emotion annotation scheme, etc. Hence, how to deal with very high intra-class variability in domain shift adaptation becomes an obstacle in transferable speech emotion recognition.

In this paper, we propose the class-wise adversarial domain adaptation (CADA) method to address the intra-class variability issue in domain shift adaptation towards improving the performance on the target domain for the positive/negative emotion recognition. Given a related source domain for which sufficient labeled data are provided, CADA employs adversarial learning in a generative manner to align each class pair between the source and target domains and hence is more effective for knowledge transfer in domain shift adaptation. The experiments on the well-known corpora EMODB and Aibo demonstrate that CADA is effective even when only a very limited number of target labeled examples are provided.

Some pioneer works have systematically evaluated cross-corpora speech emotion recognition with a number of high-quality databases [7, 8]. These works, unfortunately, do not involve any adaptation techniques for reducing the domain shift. [3]

first treats the mismatch in emotional data as covariate shift and proposes compensating for that shift by classical importance-weighting at the instance level. At the feature level, some autoencoder-based transfer learning methods

[4, 5] have developed to seek a shared feature representation so that the knowledge can be transferred between the domains. All of these methods, however, are usually applied to unsupervised rather than supervised domain adaptation, which demands a lot of data in target domain that may not be easy to collect in reality.

Regarding supervised domain adaptation in speech emotion recognition, some works have verified that a few labeled data from the target domain can be hugely helpful, but the adaptation is achieved by simple fine-tuning [9]. A sophisticated technique is by [10]. But still based on autoencoder, this technique needs a relatively large number of target examples for adaptation. Recently adversarial learning [11, 12] gains a great popularity on domain shift adaptation. A significant trait about adversarial learning is that instead of directly measuring the similarity of different domains, it introduces a domain discriminator that distinguishes the source from the target domain, and a feature representation is then learned to be domain invariant by fooling the domain discriminator. As the state-of-the-art supervised domain adaptation approach, FADA [6]

conducts adversarial learning in a discriminative way on generated pairs which mix multi-class training examples by considering the combination of classes in different domains. Although FADA yields good performance in different applications, it does not work well in speech emotion recognition as the method cannot deal with the high intra-class variability effectively in domain shift adaptation. In order to overcome this weakness, our CADA decomposes the domain shift problems on the basis of each common class in the source and target domains, leading to more effective adversarial learning. In addition, by contrast to FADA which employs typical Siamese networks feeding on paired examples, CADA can be implemented easily with a slightly modified multilayer perceptron (MLP).

A typical domain shift adaptation method usually works under the assumption P(Ys|Xs)=P(Yt|Xt). By learning a feature space ϕ such that P(ϕ(Xs))=P(ϕ(Xt)), it ideally leads to P(Ys|ϕ(Xs))=P(Yt|ϕ(Xt))

, which means the classifier can be shared by both domains (i.e. no domain shift any more). However, in speech emotion recognition, the underlying assumption that

P(Ys|Xs)=P(Yt|Xt) may be less solid because of the high intra-class variability between the source and target domains, and this further affects the learning process for the desired feature space.

To tackle this weakness, class-wise adversarial domain adaptation (CADA) is aimed at seeking a feature space ϕ for P(ϕ(Xs)|yi)=P(ϕ(Xt)|yi), yi∈Y instead of P(ϕ(Xs))=P(ϕ(Xt)). With the assumption of P(Ys)=P(Yt), by Bayesian theory, we wish to have

where ≈ is carried out for domain shift adaptation.

To integrate adversarial learning and supervised learning into one process, we introduce a domain-class discriminator which can not only distinguish the real classes but also distinguish the domains. To illustrate this idea, we take a binary classification task as an example. The modified discriminator (or classifier) classifies any instance into one of four categories:

As shown in Fig. 1, CADA can be implemented based on an MLP which comprises two components, the feature encoder Ge parameterized by θe and the predictor Gp parameterized by θp. Both θe and θp are trained to minimize the typical cross entropy loss function

Meanwhile, θe is trained to minimize the following loss function for the class-wise adversarial learning

where Xdi denotes all the examples belonging to di. This loss function measures the confusion of different domains for the same class, ensuring the adversarial learning to be sensitive to class information. For clarity, the CADA learning process is summarized in Algorithm 1.

We evaluate our proposed CADA with the two well-known speech emotion datasets Aibo [13] and EMODB [14] for positive/negative emotion recognition. Despite the same language (German), these two corpora are collected in very different ways. They differ with respect to, at least, the recording environments, speakers (adults or children), the eliciting way of emotions (acted or spontaneous), and the pre-defined emotion class stereotypes. These factors can generate both large domain shift between the two corpora and high intra-class variability for each corpus. Considering the large size of Aibo, we treat the two parts, Aibo-Ohm and Aibo-Mont, separately in our experiments. Details on these three corpora are listed in Table 1.

We further set the following baselines for comparison: 1) all-source: we test using the trained source model without any target information (without any adaptation); 2) all-target: we use the entire target dataset for traditional supervised learning; 3) label-target

: we make use of only a few labeled target data (no source domain knowledge used), and this baseline is only introduced when there are over 10 examples per class in the target domain. We use the 5-fold cross validation where 10% training examples are preserved for early stopping, and the mean and standard deviation of UA are reported. In addition, we consider two typical adaption methods in our comparison: fine-tuning

For preprocessing and feature extraction, we use GeMAPS (62 features)

[15] which has shown a comparable discriminative power as some large standard feature sets but with a much smaller size. We perform normalization by standardizing the feature values to the range [−1,1]

. Model selection suggests that an MLP of one hidden layer of 256 ReLu units is a proper base model and our CADA is implemented based on this model as well (c.f. Fig.

). The model is constructed with TensorFlow and trained with the mini-batch of size 64 and the default learning rate via AdamOptimizer.

Tables 2 and 3 report the performance when very few examples (from 2 to 12 with interval of 2) in the target domain are used. Due to the nature of supervised domain adaptation, the effectiveness of adaptation highly depends on the informativeness of the labeled target data which are used in the training process. That explains the relatively large standard deviation in two tables. All the adaptation methods achieve better performance than the baseline all-source, suggesting that domain shift adaptation is effective. It is clearly seen from Tables 2 and 3 that our CADA outperforms two state-of-the-art adaptation methods and FADA is inferior to others.

We have presented a new domain shift adaptation method, CADA, for transferable speech emotion recognition. Our experiments demonstrate that CADA is more effective than the direct use of those training examples in the target domain to build up a system and other adaptation methods when there are few training examples in the target domain. Although CADA was only evaluated on the positive/negative emotion recognition, it is straightforward to be extended to multi-class speech emotion recognition across multiple corpora and other application areas. In our ongoing work, we are going to address the computational issues in multi-class adaptation and extend CADA to unsupervised domain shift adaptation.