Transfer learning makes use of data or knowledge in one task to help solve a different, yet related, task. Many existing TL approaches are based on a joint probability distribution metric, which is a weighted sum of the marginal distribution and the conditional distribution; however, they optimize the two distributions independently, and ignore their intrinsic dependency. This paper proposes a novel and frustratingly easy Joint Probability Distribution Adaptation (JPDA) approach, to replace the frequently-used joint maximum mean discrepancy metric in transfer learning. During the distribution adaptation, JPDA improves the transferability between the source and the target domains by minimizing the joint probability discrepancy of the corresponding class, and also increases the discriminability between different classes by maximizing their joint probability discrepancy. Experiments on six image classification datasets demonstrated that JPDA outperforms several state-of-the-art metric-based transfer learning approaches. 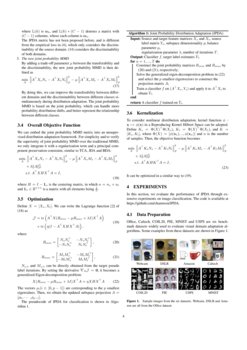 A basic assumption in statistical machine learning is that the training and the test data come from the same distribution. However, this assumption does not hold in many real-world applications. For example, in image recognition, the distributions in training and testing can be different due to varying scene, lighting, view angle, image resolution, etc. Annotating data for a new domain is often expensive and time-consuming, thus there are application scenarios that we have plenty of data, but none or a very small amount of them are labeled

According to Pan and Yang [25]

, even in deep learning

Among them, joint distribution adaptation (JDA)

[19] is the most widely used baseline in TL, whose idea is to measure the distribution shift between two domains using the marginal and the conditional MMD. Some works extended JDA by adding a regularization term [20], structural consistency [13], source domain discriminability [30], etc. For JDA based approaches, the marginal and conditional distributions are often treated equally, which may not be optimal; so, balanced distribution adaptation (BDA) [28] was proposed to give them different weights. However, both JDA and BDA consider the marginal and conditional distributions separately, ignoring the intrinsic dependency between them. The performance may be improved if this dependency can be taken into consideration.

Two measures need to be considered during feature transformation to facilitate domain adaptation [4]. One is transferability, which measures how capable the feature representation can minimize the cross-domain discrepancies. The other is discriminability

, which measures how easily different classes can be distinguished by a supervised classifier. Traditional distribution adaptation approaches usually seek to achieve high transferability

[19, 3, 5], so that the knowledge learned from the source domain can be effectively transferred to the target domain; however, the feature discriminability has been largely ignored.

Our proposed JPDA is related to MMD based TL approaches, e.g., JDA and BDA, which are briefly introduced in this section.

Long et al. [19] proposed JDA to measure the distribution discrepancy between the source and the target domains in a reproducing kernel Hilbert space using both the marginal and the conditional MMD:

Wang et al. [28] proposed BDA to match both the marginal and the conditional distributions between the source and the target domains, by introducing a trade-off parameter μ∈[0,1]:

For C-class classification, BDA uses the A-distance [1] to estimate the marginal and the conditional shift weights:

where dm (dc) is calculated by 2(1−2ϵ(f)), in which f means the error of training a linear classier f discriminating the two domains Ds and Dt (Class-c in Ds and Dt). BDA needs to train C+1 classifiers to learn μ, which is computationally expensive for big data.

This section introduces our proposed JPDA.

is the feature vector, and

y is its label, with y∈{1,⋯,C} for C-class classification.

Assume also the feature spaces and label spaces of the two domains are the same, i.e., Xs=Xt and Ys=Yt. TL seeks to learn a hypothesis h that maps the source domain Ds to Yt of the target domain. Different from previous TL approaches, we do not assume P(Xs)≠P(Xt) or P(Ys|Xs)≠P(Yt|Xt); instead, we assume P(Xs,Ys)≠P(Xt,Yt), and define the following general objective function for classification:

where MS,T=M(P(Xs,Ys),P(Xt,Yt)) defines a metric to measure the distribution shift between the source and the target domains, LS(h)=∑nsi=1γiℓ(h(xs,i)−ys,i) is the empirical loss over the source domain’s samples, R(h)=∥h∥2F controls the model complexity of h, and λ is a regularization parameter. For linear functions, h has the form of an inner product h(x)=⟨h,x⟩.

In traditional domain adaptation, MMD is frequently used to reduce the marginal and the conditional distribution discrepancies between the source and the target domains, i.e.,

which is a two-step approximation of the joint probability distribution [19].

In the first step, it uses P(X|Y)+P(X) to estimate P(Y|X)P(X). In unsupervised domain adaptation, P(Xs) and P(Xt) can be estimated directly from data [24]. For P(Yt|Xt), we can train a base classifier on the labeled source data and apply it to the unlabeled target data to get the pseudo labels ^Yt

, then the posterior probabilities can be estimated

Consider a linear hypothesis h. Define a transformation matrix A∈Rd×p for the source and the target domains. The traditional MMD can be formulated as

To quantify the distribution shift between the source and the target domains, we consider the joint probability directly.

denote the label categories of the source and the target domain, respectively. Let the class-conditional probability and class prior probability be

P(X|Y) and P(Y), respectively. Then, according to the Bayesian law, the joint probability MMD is

We can embed the joint probability MMD metric into an unsupervised distribution adaptation framework. For simplicity and to verify the superiority of joint probability MMD over the traditional MMD, we only integrate it with a regularization term and a principal component preservation constraint, similar to TCA, JDA and BDA:

where H=I−1n is the centering matrix, in which n=ns+nt and 1n∈Rn×n is a matrix with all elements being 1n.

Ns/t and Ms/t can be directly obtained from the target pseudo label iterations. By setting the derivative ∇AJ=0, it becomes a generalized Eigen-decomposition problem:

smallest eigenvalues. Then, we obtain the updated subspace projection

The pseudocode of JPDA for classification is shown in Algorithm 1.

To consider nonlinear distribution adaptation, kernel function ϕ:x↦ϕ(x) in a Reproducing Kernel Hilbert Space can be adopted. Define Ks=Φ(X)⊤Φ(Xs), Kt=Φ(X)⊤Φ(Xt), and K=[Ks,Kt], where Φ(X)=[ϕ(x1),..,ϕ(xn)] and n is the number of samples. Then, the objective function becomes

In this section, we evaluate the performance of JPDA through extensive experiments on image classification. The code is available at https://github.com/chamwen/JPDA.

Office-Caltech [9, 12] is an popular benchmark for visual domain adaptation. The Office database contains three real-world object domains: Amazon, Webcam, and DSLR. It has 4,652 images and 31 categories. Caltech-256 is a standard database for object recognition. The database has 30,607 images and 256 categories. Our experiments used the public Ofice+Caltech dataset released by Gong et al. [9]. SURF features were extracted and quantized into an 800-bin histogram with code-books computed from k-means clustering on a subset of images from Amazon. Then, the histograms were z-normalized. We had four domains: C (Caltech-256), A (Amazon), W (Webcam), and D (DSLR). By randomly selecting one domain as the source domain and a different domain as the target domain, we had 4×3=12 different cross-domain transfers, e.g., C→A, C→W, C→D, …, and D→W.

PIE, which stands for “Pose, Illumination, Expression”, is a benchmark for face recognition. The database has 68 individuals with 41,368 face images of size 32×32. The face images were captured by 13 synchronized cameras (different poses) and 21 lashes (different illuminations and/or expressions). Our experiments used the public PIE dataset released by Long et al. [19]. It has five subsets: PIE1 (C05, left pose), PIE2 (C07, upward pose), PIE3 (C09, downward pose), PIE4 (C27, frontal pose), and PIE5 (C29, right pose). In each subset (pose), all face images were taken under different lighting, illumination, and expression conditions. By randomly selecting one subset (pose) as the source domain and a different one as the target domain, we had 5×4=20 different cross-domain TL configurations, e.g., PIE1→PIE2, PIE1→PIE3, PIE1→PIE4, PIE1→PIE5, …, and PIE4→PIE5.

USPS dataset consists of 7,291 training images and 2,007 test images of size 16×16. MNIST dataset has a training set of 60,000 examples and a test set of 10,000 examples of size 28×28. Our experiments used the public USPS and MNIST datasets released by Long et al. [19]. USPS and MNIST share 10 classes of digits, but they have different distributions. To speed up the experiments, a TL configuration USPS→MNIST was constructed by randomly sampling 1,800 images in USPS to form the source domain, and randomly sampling 2,000 images in MNIST to form the target domain. Another TL configuration MNIST→USPS was obtained by switching the above source and target domains. The size of all images was uniformly rescaled to 16×16, and gray-scale pixel values were used as feature vectors, so that the source and target data shared the same feature space.

We compare the proposed JPDA with three unsupervised distribution adaptation approaches, transfer component analysis (TCA) [24], JDA [19] and BDA [28], for they have the same regularization terms but different MMD metrics, and they have been widely used in TL.

For JPDA, the balance parameter was set to μ=0.1, the regularization parameter λ=1 for Office+Caltech dataset, and λ=0.1 for all other datasets. The target domain classification accuracy was used as the performance measure.

JPDA also outperformed BDA, an improvement to joint MMD with a balance factor to the marginal MMD and the conditional MMD. These results demonstrated the limitation of BCA, i.e., the A-distance based approach cannot guarantee improved performance.

We also empirically checked the convergence of different TL approaches. Figure 3 shows the average objective values and classification accuracies in the 20 transfer tasks on PIE, as the number of iterations increased from 1 to 20. JPDA converged very quickly and achieved high classification accuracy.

The computational costs of JPDA and the three baselines are shown in Table 3. JPDA was always faster than JDA and BDA. Especially, when the dataset is large (PIE), JPDA can save over 50% computing time. TCA is the most efficient since it does not need to be optimized iteratively.

We also analyzed the parameter sensitivity of JPDA on different datasets to validate that a wide range of parameter values can be used to obtain satisfactory performance. Results on different types of datasets had shown that the number of iterations T=10 and the dimensionality of the subspace p=100 are good choices, so we only studied the sensitivity of JPDA to the two adjustable parameters, the balance parameter μ and the regularization parameter λ. The results are shown in Figure 4. JPDA is robust to the balance parameter μ∈[0.001,0.2], and to the regularization parameter λ∈[0.01,10].

TL makes use of data or knowledge in one task to help solve a different, yet related, task. This paper focuses on distribution adaptation with joint probability MMD, and proposed a novel JPDA approach. JPDA can improve the transferability between different domains and the discriminability between different classes simultaneously, by minimizing the joint probability MMD of the same class in the source and target domains, and maximizing the joint probability MMD of different classes. Compared with traditional MMD approaches, JPDA has a simpler form, and is more effective in measuring the discrepancy between different domains. Experiments on six image classification datasets verified the effectiveness of JPDA. Our future research will consider more effective TL metric for deep learning and adversarial learning.