In this paper we propose a method for transfer learning of endoscopic images. For transferring between features obtained from images taken by different (old and new) endoscopes, we extend the Max-Margin Domain Transfer (MMDT) proposed by Hoffman et al. in order to use L2 distance constraints as regularization, called Max-Margin Domain Transfer with L2 Distance Constraints (MMDTL2). Furthermore, we develop the dual formulation of the optimization problem in order to reduce the computation cost. Experimental results demonstrate that the proposed MMDTL2 outperforms MMDT for real data sets taken by different endoscopes. 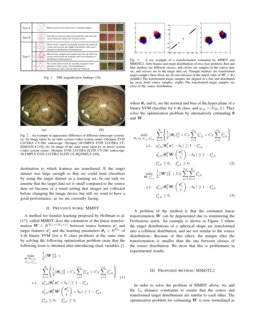 Nowadays in many hospitals, an endoscopic examination (colonoscopy) using Narrow Band Imaging (NBI) system is widely performed to diagnose colorectal cancer [1], which is one of the major cause of cancer death [2]. During examinations, endoscopists observe and examine a polyp based on its visual appearance such as an NBI magnification findings [3, 4]. To support diagnosis during examinations, a computer-aided diagnosis system based on the texture appearances of polyps would be helpful, and therefore patch-based classification methods for endoscopic images have been proposed [5, 6, 7, 8, 9, 10, 11].

. As other usual machine learning approaches, training of classifiers assumes that the distributions of features extracted from both training and testing image datasets are the same. However, different endoscopies may be used to collect training and testing datasets, leading the assumption to be violated. One reason is due to the rapid development of medical devices (endoscopies in our case), and hospitals could introduce new endoscopes at a certain point in time after training images were taken. Another reason is that a dataset is constructed for training classifiers with a training data set collected by a certain type of endoscope in one hospital, while another hospital could want to use the classifiers for images taken by a different endoscope. In general, such kind of inconsistency could lead to a deterioration of the classification performance, hence collecting new images for a new training dataset may be necessary in general. It is however not the case with our medical images: it is impractical to collect a enough set of images for all types and manufactures of endoscopes.

Figure 2 shows an example of the difference between appearance of texture taken by different endoscope systems. These images are the same scene of a printed sheet of a colorectal polyp image, but taken by different endoscope systems, at almost the same distance to the sheet from the endoscopes. Even for the same manufacture (Olympus) and the same modality (NBI), images differ to each other in resolutions, image quality and sharpness, brightness, viewing angle, and so on. This kind of difference may affect the classification performance.

for estimating a transformation matrix between feature vectors of training and testing data sets taken by different (old and new) devices. In this prior work, we formulated the problem as a constraint optimization, and developed an algorithm to estimate the linear transformation. The problem however is that corresponding data sets are required, in other words, each of test image (taken by a new device) must have a corresponding training image (taken by an old device), and moreover these images must capture the same polyp in order to estimate the linear transformation. This restriction is very strong and even impractical.

In this paper, we propose another method for the task, but without image-by-image correspondences between training and test data sets. More specifically, we extend Max–Margin Domain Transfer (MMDT) [17] in order to use L2 distance constraints as a regularization, called Max–Margin Domain Transfer with L2 Distance Constraints (MMDTL2). This extension is our first contribution, and the second contribution is the derivation of the dual problem to the original primal problem, which greatly reduce the computation cost. Experimental results with real endoscopic images show that the our proposed method, MMDTL2, outperforms the previous method, MMDT.

Here we formulate the problem setting. We are given a data set of images Isn (n=1,…,nS) taken by an older device, and corresponding feature vectors xsn∈RMS and labels ysn∈{1,…,K}. By following the terms of domain adaptation, we call this data set “source” (or source domain) because it is the set or domain from which features are transferred. Then another data set of images Itn (n=1,…,nT) with corresponding features xtn∈RMT and labels ytn∈{1,…,K}. We call this “target” (or target domain) because this is the destination to which features are transferred. If the target dataset was large enough so that we could train classifiers by using the target dataset as a training set. In our task we assume that the target data set is small compared to the source data set because of a usual setting that images are collected before changing the image device but still we want to have a good performance, as we are currently facing.

A method for transfer learning proposed by Hoffman et al. [17], called MMDT, does the estimation of the linear transformation W∈RMS×(MT+1) between source features xsi and target features xtj and the learning parameters θk∈RMS of k-th binary SVM (for a K class problem) at the same time by solving the following optimization problem (note that the following form is obtained after introducing slack variables ξ).

where θk and bk are the normal and bias of the hyper plane of a binary SVM classifier for k-th class, and yi,k=δ(yi,k). They solve the optimization problem by alternatively estimating θ and W.

In order to solve the problem of MMDT above, we add the L2 distance constraints to ensure that the source and transformed target distributions are similar to each other. The optimization problem for estimating W is now formulated as follows:

where D is a scaler, and yi,j is a weight between xti and xsj.

For simplicity, hereafter we restrict that the last column of W is zero, in other words, W∈RMS×MT and all forms of W(xtj1) become Wxtj. Then by rewriting the problem we have the following standard form of quadratic programing:

This quadratic programming however is not efficient to solve because the number of variables is MSMT+nT, therefore solving this quadratic programming requires about O((MSMT+nT)3) computations (e.g., [21]). This means that the primal problem becomes intractable quickly as the feature dimension increases. Next we therefore derive the dual problem to this primal problem in order to reduce the computation cost.

To this end, we first obtain the Lagrangian

where ai and μi are Lagrangian multipliers. Then we take the derivatives with respect to w and ξti,k and let them to zero;

After that, we substitute Eqs. (9) and (10) into Eq. (5), and rearrange the equation with respect to ai then finally we have the following quadratic programming.

Later we compute w by using estimated ai and Eq. (12) as follows:

In this section, we show two kind of experimental results. First, we compare the computation cost between the primal and dual problem formulations. Second, we compare the proposed MMDTL2 with MMDT.

Iv-a Comparison between primal and dual

Table I show computation time of the primal and dual formulations, where the feature dimension is MS=MT=128. The setup time counts how long it takes to compute coefficients of w in Eq. (5) for the primal, or coefficients of ai in Eq. (11) for the dual. The optimization time is the computation time to solve a quadratic program, the calculation time is to compute w from ai, meaningful only for dual. In this setting, the dual formulation of MMDTL2 is about 12 times faster than the primal.

In this experiment, we compare performances of the proposed method with the following settings, which are similar to [12]. These settings are shown in Figure 4 in terms of 10-fold cross validation.

The second setting also doesn’t use any transfer learning but with the source and target datasets. This means that source images are used for training, and the resulting classifier is simply used to classify target (test) images. We divide the source and target datasets in to 10 folds (each source fold in the source corresponds to a target fold). Then 9 source folds are used for training, and the remaining one target fold is used for testing.

The third setting doesn’t use any transfer learning, too. Target images are however also used for training unlike the previous settings above. We divide the source and target datasets in to 10 folds, then 18 folds (9 source and 9 target folds) are used for training a classifier. The remaining target fold is used for testing by simply applying the trained classifier. Note that the number of training images is now doubled while the number of testing images remains the same.

The last setting is MMDTL2, the proposed method. The setting is the same with MMDT.

Figure 5 show performances of the different setting. As expected, the source only setting is slightly worse than the baseline as the distributions of the source and target data sets are different actually. Results of MMDT are worse in any cases. It might be due to the problem that estimated linear transformations are degenerated. The proposed MMDTL2 is much better than MMDT because of the additional L2 constraints, and comparable to the baseline in higher dimension. Also MMDTL2 is expected to behave better than the not transfer setting when MS=MT≥256.