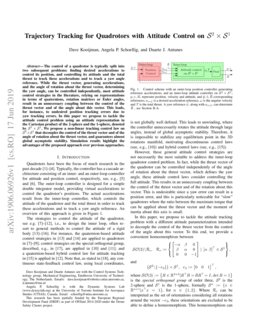 The strategies to control the attitude of the quadrotor, see e.g. [7, 8, 9, 10, 11, 12], i.e., to design the inner loop, often resort to general methods to control the attitude of a rigid body [13, 14, 15, 16]. For instance, the quaternion-based attitude control strategies in [13] and [14] are applied to quadrotors in [7, 8, 9]; control strategies on the special orthogonal group, described, e.g., in [17], are applied in [10] and [11]; and a quaternion-based hybrid control law for attitude tracking in [15] is applied in [12]. Note that, as stated in [18], any continuous state-feedback control law, using local coordinates, is not globally well defined. This leads to unwinding, where the controller unnecessarily rotates the attitude through large angles, instead of global asymptotic stability. Therefore, it is impossible to stabilize any equilibrium point in the 3D rotations manifold, motivating discontinuous control laws (see, e.g., [10]) and hybrid control laws (see, e.g., [15]).

However, these general attitude control strategies are not necessarily the most suitable to address the inner-loop quadrotor control problem. In fact, while the thrust vector of the quadrotor can be controlled independently of the angle of rotation about the thrust vector, which defines the yaw angle, these attitude control laws consider controlling the full attitude. This results in an unnecessary coupling between the control of the thrust vector and of the rotation about this vector. This is undesirable since a yaw error can result in a position error, and this is particularly noticeable for “slow” quadrotors where the ratio between the maximum torque that can be applied about the thrust vector and the moment of inertia about this axis is small.

In this paper, we propose to tackle the attitude tracking problem with a different attitude parameterization intended to decouple the control of the thrust vector from the control of the angle about this vector. To this end, we provide a convenient homeomorphism between

where SO(3):={R∈R3×3|R⊤R=RR⊤=I,detR=1} is the special orthogonal group of order three, S2 is the 2-sphere and S1 is the 1-sphere, formally Sn:={x∈Rn+1|x⊤x=1}, for n∈{1,2}. Where Rc can be interpreted as the set of orientations considering all rotations around the vector −e3, these orientations are excluded to be able to define a homeomorphism. This homeomorphism can be intuitively explained as follows. Given a rotation matrix in the special orthogonal group, which is not in Rc, take the third column r3, which belongs to S2, and the representation of the first column in the vectors of the orthogonal space to r3 defined by the parallel transport of e1:=[100]⊤ and e2:=[010]⊤ along the geodesic on S2 between e3 and r3 (see Figure 2). Note that, for (v,w)∈S2×S1, with v≠−e3, v corresponds to the normalized thrust vector, and is equal to e3 when hovering, and w determines the angle about the thrust vector.

We then show that by applying a suitable input transformation, v and w can be controlled independently. We propose tracking control laws for the tracking subproblems in S2 and S1, considering the angular velocity as an input to the quadrotor. The proposed control law avoids coupling by construction. For differentiable attitude references, asymptotic convergence of the attitude tracking errors to zero as time converges to infinity is established, for every initial condition except at a single point, which has zero Lebesgue measure (following, e.g., [19] we call this almost global stability).

At the time of writing we found similar decoupling approaches for the attitude control of quadcopters in the literature (see [20, 21, 22, 23]). Our approach differs from previous work in the parametrization we propose, which we believe provides a more natural way to define the rotation about the thrust vector.

This paper is organized as follows. Section II introduces the problem. The proposed approach is presented in Section III. Section IV discusses an outer-loop trajectory tracking strategy to control the overall model. Section V provides simulation results that show the advantages of the proposed solution compared to previous attitude control strategies for quadcopters, and conclusions are provided in Section VI.

Let {A} denote a world fixed frame, and {B} a body fixed frame centered at the vehicle’s center of mass. The third axis of {A}, denoted by e3, is assumed to be aligned with the gravity vector, as is the third axis of {B}, denoted by r3, when the quadrotor is hovering. Moreover, let p∈R3 and v∈R3 denote the position and velocity, respectively, of the center of mass of the quadrotor expressed in {A}. Let R=[r1r2r3]∈SO(3) denote the attitude of {B} relative to {A}.

The forces acting on the quadrotor and expressed in the world fixed frame are assumed to be the gravity force, mge3, where m∈R and g∈R denote the mass and gravitational acceleration; the thrust force −TRe3, where T∈R>0 denotes the total thrust generated by the blades. Therefore,

The thrust vector, defined as −TRe3=−Tr3, can then be controlled by controlling the last column of the rotation matrix. Often in the literature, and also here one assumes that the angular velocity can be directly controlled by controlling the motor speeds, i.e., ω is the control input of the model. Alternatively, one can consider that the thrust generated by each propeller generates torques, denoted by τ∈R3, which are related to angular velocities by

where I∈R3×3 denotes the inertia matrix.

Consider a reference (¯p(t),¯v(t),¯R(t),¯ω(t)) continuous in time t∈R≥0 that satisfies (1) for a given initial condition, i.e., a reference that the quadrotor can track exactly and such that the corresponding total thrust satisfies

for every t∈R≥0. We can parameterize this class with the position reference ¯p and an auxiliary angle ¯ψ∈(−π,π], which plays the role of the yaw reference angle. The position reference ¯p(t), for which the first three derivatives are assumed to exist if (1) is considered or the first four derivatives are assumed to exist if (1), (2) are considered, characterizes the third column of the rotation matrix ¯r3, and the thrust ¯T, since, from the second equation in (1) we can write

Following a common cascaded control design approach, we divide the tracking control problem into two subproblems: (i) find a virtual acceleration aref∈R3 to control the model

Note that driving (8) to zero constraints r3 to coincide with the reference vector ¯r3 and once such a condition is met, one can replace the goal ¯R⊤R→I by simply ¯r⊤1r1=1 and ¯r⊤2r2=1, which is equivalent to stating that the angle of rotation about the normalized thrust vector (i.e., r3=¯r3 when ~a=0) must coincide with the desired value. When (4) is met, this means that the yaw angle of the quadrotor coincides with the desired yaw reference angle ¯ψ.

The inner-loop control problem for quadrotors is typically tackled directly in SO(3), or quaternion or Euler angles representations. For instance, letting ~R∈SO(3) represent a reference attitude and ~R:=¯R⊤R, the feedback controller (see [24, 11])

where K=K⊤>0∈R3×3, and ki>0∈R are distinct (e.g., 0<k1<k2<k3) is such that ~R(0) converges to I for every initial condition ~R(0)∈SO(3)∖{diag(1,−1,−1),diag(−1,1,−1),diag(−1,−1,1)}. Moreover, a globally stabilizing discontinuous feedback quaternion-based law can be found in [15, 16]. However, the position control of a quadrotor is only dependent on the third column of the rotation matrix (collinear with the thrust vector), as one attempts to drive the error (8) to zero. While the method we propose drives the third column of R to a desired value and controls independently the angle about the third column of R so that R converges to a desired reference, both of these methods do not control these two quantities independently leading to undesired behaviors (see Section V).

We can parameterize SO(3)∖Rc as follows. Let v∈S2∖{−e3} and w∈S1. For v≠e3 define the following two perpendicular vectors in the tangent space to S2 at v,

where I denotes the 3×3identity matrix. Note that a⊥2(v) is also in the tangent space to S2 at e3. Let

be an extra vector in the tangent space to S2 at e3, which is perpendicular to a⊥2(v). The first component of these tangent vectors at e3 are denoted by

In fact, it is clear that ϕ and ϕ−1 are one-to-one and continuous; therefore, ϕ defines an homeomorphism between (S2∖{−e3})×S1 and SO(3)∖Rc.

In this section, we focus on the control of the attitude described by the equation

and consider the standard stabilization problem of finding a control law for ω that drives R to the identity matrix ¯R=[¯r1¯r2¯r3]=I for a given initial condition R(0)=R0∈SO(3). The tracking problem can either be converted into a stabilization problem by defining ~R=¯R⊤R and noticing that ˙~R=~RS(~ω), for ~ω=ω−R⊤¯R¯ω or tackled as we do in the sequel.

Note that with this transformation we can control independently v∈S2 and w∈S1.

To this effect, we start by noticing that if we make

Note that the component of uv parallel to v plays no role in (13). Therefore, considering that uv belongs to the tangent space to v, that is,

The parallel transport from the space orthogonal to ¯v to the space orthogonal to v along the geodesic curve in S2 connecting the two is given by RrR⊤ez, for a vector z that belongs to the tangent space to S2 at ¯v. We can then use the parallel transport for ¯r1 and ¯r2 and obtain a local frame in the tangent space of v, {RrR⊤e¯r1,RrR⊤e¯r2}, the angle between this frame and {r1,r2} is the error angle. Note that w=(w1,w2), where

Then we can write

Let ¯v=¯r3 be the reference for v. We propose the following control law to control (13),

where uv,FB and uv,FF can be seen as feedback and feedforward laws as detailed next.

For feedback, we consider

with k1>0. Intuitively, this control law is such that when used in (13), (I−vv⊺)uFB becomes a vector of the tangent space at v proportional to the derivative at v of the geodesic curve from v to ¯v (the curve connecting v and ¯v in S2 with shortest distance). The norm of this tangent vector is unitary in {v∈S2|v⊤¯v≤0} and decreases as v approaches ¯v in {v∈S2|v⊤¯v>0}. Note that when v=−¯v the geodesic is not unique. Therefore the control law corresponds to a rotation in the direction of r1, while in fact, any unitary vector in the plane (r1,r2) can be used.

For the feedforward term, we consider

with Θ=1s(v,¯v)2((v×¯v)(v×¯v)⊤−(I−vv⊤)¯vv⊤), which maps ˙¯v to the tangent space of S2 at v (see Fig. 2). The intuition behind this feedforward control law is that the angle between v and ¯v remains constant when only the feedforward input is applied.

Now we will look at the stability of this control law, which is summarized in the next result.

It rests to prove (22). The time derivative of ξ is

We propose the following control law

for some positive constant k2.

The next result establishes that this control drives w1 to 1 and w2 to 0, as desired.

for every initial condition w(0)∈S1.

which is always positive definite. The derivative is given by ˙V(w1,w2)=−˙w1 and can be rewritten as

The combined control law in S2×S1 allows for (10) to track a given reference ¯R as stated in the next result, which results from the arguments given in the previous sections.

for every initial condition R(0) such that ~R∈SO(3)∖Rc.

Since asymptotic convergence of R to ¯R is obtained for every initial condition except in a set of measure zero, this result assures almost global convergence, following the standard terminology in the literature [19].

Following the control approach of Section II-B, in this section we consider the position tracking problem of finding virtual acceleration input references aref for (7) that can track a certain position and velocity trajectory. The inner loop must make the error (8) zero. Note that when (8) is zero, then aref∈A where

is a ball in R3 and TM is the maximum total thrust that can be applied. Since, for a vector z∈R3, ∥z∥2≤√3∥z∥∞, A∞⊆A where