Restricted Boltzmann machines (RBMs) with low-precision synapses are much appealing with high energy efficiency. However, training RBMs with binary synapses is challenging due to the discrete nature of synapses. Recently Huang proposed one efficient method to train RBMs with binary synapses by using a combination of gradient ascent and the message passing algorithm under the variational inference framework. However, additional heuristic clipping operation is needed. In this technical note, inspired from Huang's work , we propose one alternative optimization method using the Bayesian learning rule, which is one natural gradient variational inference method. As opposed to Huang's method, we update the natural parameters of the variational symmetric Bernoulli distribution rather than the expectation parameters. Since the natural parameters take values in the entire real domain, no additional clipping is needed. Interestingly, the algorithm in <cit.> could be viewed as one first-order approximation of the proposed algorithm, which justifies its efficacy with heuristic clipping. 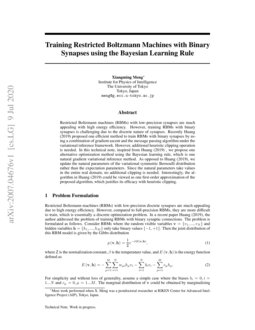 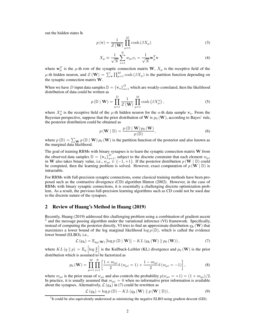 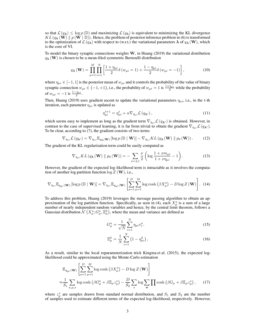 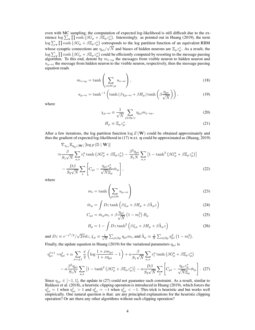 Restricted Boltzmann machines (RBMs) with low-precision discrete synapses are much appealing due to high energy efficiency. However, compared to full-precision RBMs, they are more difficult to train, which is essentially a discrete optimization problem. In a recent paper Huang (2019), the author addressed the problem of training RBMs with binary synaptic connections. The problem is formulated as follows. Consider RBMs where the random visible variables v={v1,...,vN} and hidden variables h={h1,...,hM} only take binary values {−1,+1}

where Z is the normalization constant, β is the temperature value, and E(v,h) is the energy function defined as

For simplicity and without loss of generality, assume a simple case where the biases bi=0,i=1...N and cμ=0,μ=1...M. The marginal distribution of v could be obtained by marginalizing out the hidden states h

where wTμ is the μ-th row of the synaptic connection matrix W, Xμ is the receptive field of the μ-th

Z(W)=∑v∏Mμ=1cosh(βXμ) is the partition function depending on the synaptic connection matrix W.

When we have D input data samples D={va}Da=1 which are weakly-correlated, then the likelihood distribution of data could be written as

where Xaμ is the receptive field of the μ-th hidden neuron for the a-th data sample va. From the Bayesian perspective, suppose that the prior distribution of W is p0(W), according to Bayes’ rule, the posterior distribution could be obtained as

where p(D)=∑Wp(D∣W)p0(W) is the partition function of the posterior and also known as the marginal data likelihood.

The goal of training RBMs with binary synapses is to learn the synaptic connection matrix W from the observed data samples D={va}Da=1, subject to the discrete constraint that each element wμi in W also takes binary value, i.e., wμi∈{−1,+1}. If the posterior distribution p(W∣D) could be computed, then the learning problem is solved. However, exact computation of p(W∣D) is intractable.

For RBMs with full-precision synaptic connections, some classical training methods have been proposed such as the contrastive divergence (CD) algorithm

Hinton (2002). However, in the case of RBMs with binary synaptic connections, it is essentially a challenging discrete optimization problem. As a result, the previous full-precision learning algorithms such as CD could not be used due to the discrete nature of the synapses.

Recently, Huang (2019) addressed this challenging problem using a combination of gradient ascent 111It could be also equivalently understood as minimizing the negative ELBO using gradient descent (GD). and the message passing algorithm under the variational inference (VI) framework. Specifically, instead of computing the posterior directly, VI tries to find an approximate distribution qλ(W) that maximizes a lower bound of the log marginal likelihood logp(D), which is called the evidence lower bound (ELBO), i.e.,

and also controls the probability

p(wμi=+1)=(1+mμi)/2. In practice, it is usually assumed that mμi=0 when no informative prior information is available about the synapses. Alternatively, L(qλ) in (7) could be rewritten as

so that L(qλ)≤logp(D) and maximizing L(qλ) is equivalent to minimizing the KL divergence KL(qλ(W)∥p(W∣D)). Hence, the problem of posterior inference problem in (6) is transformed to the optimization of L(qλ) with respect to (w.r.t.) the variational parameters λ of qλ(W), which is the core of VI.

To model the binary synaptic connections weights W, in Huang (2019) the variational distribution qλ(W) is chosen to be a mean-filed symmetric Bernoulli distribution

Then, Huang (2019) uses gradient ascent to update the variational parameters ημi, i.e., in the t-th iteration, each parameter ημi is updated as

is obtained. However, in contrast to the case of supervised learning, it is far from trivial to obtain the gradient

∇ημiL(qλt). To be clear, according to (7), the gradient consists of two terms

However, the gradient of the expected log-likelihood term is intractable as it involves the computation of another log partition function logZ(W), i.e.,

To address this problem, Huang (2019) leverages the message passing algorithm to obtain an approximation of the log partition function. Specifically, as seen in (4), each Xaμ

is a sum of a large number of nearly independent random variables and hence, by the central limit theorem, follows a Gaussian distribution

, where the mean and variance are defined as

As a result, similar to the local reparameterization trick Kingma et al. (2015)

, the expected log-likelihood could be approximated using the Monte-Carlo estimation

are samples drawn from standard normal distribution, and

After a few iterations, the log partition function logZ(W) could be obtained approximately and thus the gradient of expected log-likelihood in (17) w.r.t. η could be approximated as (Huang, 2019)

Finally, the update equation in Huang (2019) for the variational parameters ημi is

In this section, we propose one alternative method to train RBMs with binary synaptic connections using the Bayesian Learning Rule Khan and Lin (2017), which is obtained by optimizing the variational objective by using natural gradient descent Amari (1998); Hoffman et al. (2013); Khan and Lin (2017). As demonstrated in Khan and Rue (2019)

to train binary neural networks for supervised learning. Therefore, this note could be viewed as an extension of

to the case of unsupervised learning

Specifically, to optimize the variational objective in (7), the Bayesian learning rule Khan and Rue (2019) considers a class of minimal exponential family distribution

where λ is the natural parameter, ϕ(W)

is the vector of sufficient statistics,

A(λ) is the log-partition function, and h(W) is the base measure. When the prior distribution p0(W) follows the same distribution as qλ(W) in (28), and the base measure h(W)=1, the Bayesian learning uses the following update of the natural parameter Khan and Rue (2019)

To apply the Bayesian learning rule, the posterior approximation qλ(W) is also chosen to be the fully factorized symmetric Bernoulli distribution in (10), which is in fact belonging to the minimal exponential family distribution. In particular, qλ(W) in (10) could be reformulated as follows

Therefore, substituting (22) into (29), the natural parameters λμi could be updated as

Note that there is no need in (38) to explicitly compute the right hand side term of (39), which is different from (27). The resultant algorithm to train RBMs with binary synaptic connections with (38) is termed as Bayesian Binary RBMs (BayesBRBM). Note that in BayesBRBM, the update formula (38) is similar to (27) used in Huang (2019). However, there are two fundamental differences. First, BayesBRBM updates the natural parameters λμi of the symmetric Bernoulli distribution while Huang (2019) updates the expectation parameters ημi. One direct advantage is that since λμi∈(−∞,+∞), no additional clipping operation is needed as Huang (2019). Second, although the update equations (38) and (27) appear the same, they actually correspond to two fundamentally different optimization methods: the former uses natural gradient ascent while the latter uses gradient ascent.

Interestingly, the algorithm in Huang (2019) could be viewed as one kind of first-order approximation of BayesBRBM. Specifically, using first-order Taylor expansion, the expectation parameters ημi could be approximated as

Using the first-order approximation (40), the update equation in (38) is approximated as

where the relation in (39) is explicitly substituted for ease of comparison. It could be seen that the update formula in (41) has exactly the same form as (27) except the exchange of variables between λμi and ημi. Since ημi∈[−1,+1], using first-order approximation (40), the values λμi should also be constrained into the range [−1,+1] by using clipping, which is exactly the algorithm in Huang (2019). As a result, the proposed algorithm provides a different perspective on Huang (2019) which justifies its efficacy with heuristic clipping.

In this technical note, building on the work in Huang (2019), we propose one optimization method called BayesBRBM (Bayesian Binary RBM) to train RBM with binary Synapses using the Bayesian learning rule. As opposed to Huang (2019), no additional clipping operation is needed for BayesBRBM. Interestingly, the method in Huang (2019) could be viewed as a first-order approximation of BayesBRBM, which provides an alternative perspective and justifies its efficacy with heuristic clipping. One possible future work is to extend it to deep RBMs with binary synapses and make some detailed comparison of the two algorithms.

In this appendix, we briefly introduce the Bayesian learning rule. please refer to Khan and Rue (2019); Khan and Lin (2017) for more details. According to the definition of natural gradient ascent, the update equation follows

As a result, to update natural parameters using the natural gradient we need to compute the inverse FIM, which is intractable in general. Fortunately, for minimal exponential family distribution q(W) in (28), there exists a concise result since F(λt)−1∇λL(qλt)=∇ηL(qλt) where η is the expectation parameter of exponential family distribution qλ(W). As a result, ~∇λL(qλt)=∇ηL(qλt) so that the natural gradient update in (42) could be equivalently written as