Training generative adversarial networks (GANs) often suffers from cyclic behaviors of iterates. Based on a simple intuition that the direction of centripetal acceleration of an object moving in uniform circular motion is toward the center of the circle, we present the Simultaneous Centripetal Acceleration (SCA) method and the Alternating Centripetal Acceleration (ACA) method to alleviate the cyclic behaviors. Under suitable conditions, gradient descent methods with either SCA or ACA are shown to be linearly convergent for bilinear games. Numerical experiments are conducted by applying ACA to existing gradient-based algorithms in a GAN setup scenario, which demonstrate the superiority of ACA. 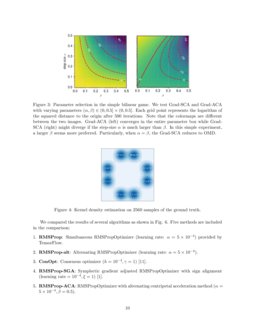 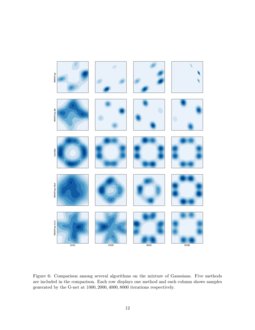 Generative Adversarial Nets (GANs)[7] are recognized as powerful generative models, which have successfully been applied to various fields such as image generation[8], representation learning[15]

[17]. The idea behind GANs is an adversarial game between a generator network (G-net) and a discriminator network (D-net). The G-net attempts to generate synthetic data from some noise to deceive the D-net while the D-net tries to discern between the synthetic data and the real data. The original GANs can be formulated as the min-max problem:

Though GANs are appealing, they are often hard to train. The main difficulty might be the associated gradient vector field rotating around a Nash equilibrium due to the existence of imaginary components in the Jacobian eigenvalues

[11], which results in the limit oscillatory behaviors. There are a series of studies focusing on developing fast and stable methods of training GANs. Using the Jacobian, consensus optimization[11] diverts gradient updates to the descent direction of the field magnitudes. More essentially, a differential game can always be decomposed into a potential game and a Hamiltonian game[1]. Potential games have been intensively studied [13] because gradient decent methods converge in these games. Hamiltonian games obey a conservation law such that iterates generated by gradient descent are likely to cycle or even diverge in these games. Therefore, Hamiltonian components might be the cause of cycling when gradient descent methods are applied. Based on the observations, the Symplectic Gradient Adjustment (SGA) method [1] modifies the associated vector field to guide the iterates to cross the curl of the Hamiltonian component of a differential game. [4] also uses the similar technique to cross the curl such that rotations are alleviated. By augmenting the Follow-the-Regularized-Leader algorithm with an l2 regularizer[16] by adding an optimistic predictor of the next iteration gradient, Optimistic Mirror Descent (OMD) methods are presented in [3] and analysed in [5, 10, 9, 12]. The negative momentum is employed in [6] to deplete the kinetic energy of the cyclic motion such that iterates would fall towards the center. It is also observed in [6] that the alternating version of the negative momentum method is more stable.

Our idea is motivated by two aspects. Firstly and intuitively, we use the fact that the direction of centripetal acceleration of an object moving in uniform circular motion points to the center of the circle, which might guide iterates to cross the curl and escape from cycling traps. Secondly, we try to find a method to approximate the dynamics of consensus optimization or SGA to cross the curl without computing the Jacobian, which can reduce computational costs. Then we were inspired to present the centripetal acceleration methods, which can be used to adjust gradients in various methods such as SGD, RMSProp

[18] and Adam[2]. For stability and effectiveness, we are also motivated by [6] to study the alternating scheme, which could even work in a notorious GAN setup scenario.

The main contributions are as follows:

The simultaneous gradient descent method in training GANs [14] is

The alternating version is

However, directly applying gradient descent even fails to approach the saddle point in a toy model (See Fig. 2 in Section 4). By applying the Simultaneous Centripetal Acceleration (SCA) method, which will be explained later, to adjust gradients, we obtain the method of Gradient descent with SCA (Grad-SCA):

It can be seen that the gradient decent scheme is still employed in (2.4) and (2.6), while the gradients in (2.3) and (2.5) are adjusted by adding the directions of centripetal acceleration simultaneously. If adjusting the gradients by the Alternating Centripetal Acceleration (ACA) method, we obtain the following method of Gradient descent with ACA (Grad-ACA):

Grad-ACA also employs simple gradient descent steps but adjusts the gradients by adding the directions of centripetal acceleration alternatively. Nevertheless, the idea of centripetal acceleration can also be applied to other gradient-based methods, resulting in more efficient algorithms. For example, the RMSProp algorithm [18] with ACA, abbreviated by RMSProp-ACA, performs well in our numerical experiments (see Section 4.2).

The proposed centripetal acceleration methods are also inspired by the dynamics of consensus optimization. In a Hamiltonian game, the associated vector field ∇V conserves the Hamiltonian’s level sets because ⟨∇V,∇∥∇V∥2⟩=0, which prevents iterates from approaching the equilibrium where ∥∇V∥=0. To illustrate the similarity between centripetal acceleration methods and consensus optimization in Hamiltonian games, we consider the n-player differential game where each player has a loss function li(w1,w2,⋯,wn) for i=1,2,⋯,n. Then the simultaneous gradient is ξ(w1,w2,⋯,wn):=(∇w1l1,∇w2l2,⋯,∇wnln). The Jacobian of ξ is

Let w:=(w1,w2,⋯,wn). Then the iteration scheme of consensus optimization is

and the corresponding continuous dynamics has the form:

When β is small, the dynamics approximates

By rearranging the order, we obtain

Since the game is assumed to be Hamiltonian, i.e., J=−JT, the dynamic equation (2.15) becomes

Note that Jdwdt=dξdt. Then (2.16) is equivalent to

Discretizing the equation with stepsize α, we obtain

Very recently, from the perspective of generalizing OMD, [12] presented schemes similar to Grad-SCA and they studied its convergence under a unified proximal method framework. However, OMD is motivated by predicting the next iteration gradient to be the current gradient optimistically. Although the scheme of OMD coincides with Grad-SCA, we must stress that the motivations are essentially different and result in totally distinct parameter selection strategies. Due to the similar dynamics, the presented methods inherit parameter selection strategies of consensus optimization and SGA. For example, in the second experiment in Section 4, we take α1=α2=5×10−4 and β1=β2=0.5. The magnitude of β is quite larger than α instead of an equality. Moreover, we analyze the alternating form (Grad-ACA) (2.7)-(2.10) and employed RMSProp-ACA in the numerical experiments. Therefore, the presented methods are not trivial generalizations of OMD and the idea of centripetal acceleration is quite useful.

Another similar scheme[5] is to extrapolate the gradient from the past:

It can be rewritten as

which is equivalent to OMD. The algorithm may also be closely related to the predictive methods with the following form:

A unified framework to analyze OMD and predictive methods is presented in [9].

Last but not least, our idea of using alternating scheme comes from negative momentum methods[6], which suggests alternating forms might be more stable and effective in practice.

In this section, we focus on the convergence of Grad-SCA and Grad-ACA in the bilinear game:

Any stationary point (θ∗,ϕ∗) of the game satisfies the first order conditions:

It is obvious that a stationary point exists if and only if b is in the range of A and c is in the range of AT. We suppose that such a pair (θ∗,ϕ∗) exists. Without loss of generality, we shift (θ,ϕ) to (θ−θ∗,ϕ−ϕ∗). Then the problem is reformulated as:

In the following two subsections, we analyze convergence properties of Grad-SCA and Grad-ACA, respectively. Technique details are postponed to appendices.

For the bilinear game, Grad-SCA is specified as

Define the matrix F1∈R2p+2d as

It is obvious that [θt+1,ϕt+1,θt,ϕt]T=F1[θt,ϕt,θt−1,ϕt−1]T, where (θt,ϕt) are generated by (3.5) and (3.6). For simplicity, we suppose that A is square and nonsingular in Propositions 3.2 and 3.3 and Corollary 3.4. Then we prove the linear convergence for a general matrix A in Proposition 3.5 and Corollary 3.6. We will employ the following well-known lemma to illustrate the linear convergence.

Suppose that F∈Rp×p has the spectral radius ρ(F)<1. Then the iterative system xk+1=Fxk converges to 0 linearly. Explicitly, ∀ε>0, there exists a constant C>0 such that

Suppose that A is square and nonsingular. The eigenvalues of F1 are the roots of the fourth order polynomials:

where Sp(⋅) denotes the collection of all eigenvalues.

Suppose that A is square and nonsingular. Then Δt:=∥θt∥2+∥ϕt∥2+∥θt+1∥2+∥ϕt+1∥2 is linearly convergent to 0 if α and β satisfy

where λmax(⋅) and λmin(⋅) denote the largest and the smallest eigenvalues, respectively.

Consider the special case when Grad-SCA reduces to OMD. Then we have the following corollary. The corollary is slightly weaker than the existing result [9, Lemma 3.1].

With the analogous analysis, we have the following result for OMD.

In this subsection, we consider Grad-ACA for the bilinear game,

The update of ϕt+1 can be rewritten as:

Thus we define the matrix

Next, we do not assume A to be square and nonsingular. Employing the SVD decomposition A=UDVT and with the same techniques employed in Proposition 3.5, we have

which implies that (θt,ϕt) linearly converges to the stationary point (PN(θ0),PM(ϕ0)).

In the first experiment, we tested Grad-SCA and Grad-ACA on the following bilinear game

We compared the effects of various step-sizes and acceleration coefficients in both simultaneous and alternating cases. Fig. 3 suggests that the alternating methods are preferable.

Both the generator and the discriminator networks have four fully connected layers of 256neurons. Each of the four layers is activated by a ReLU layer. The generator has two output neurons to represent a generated point while the discriminator has one output which judges a sample. The random noise input for the generator is a 16-D Gaussian. We conducted the experiment on a server equipped with CPU i7 4790, GPU Titan Xp, 16GB RAM as well as TensorFlow (version 1.12) and Python (version 3.6.7).

We compared the results of several algorithms as shown in Fig. 6. Five methods are included in the comparison:

To stress the effectiveness brought by parameter selection and alternating strategy regardless of the similar form with OMD, we also tested OMD on this simulation with searching a range of parameters (See Appendix B).

The centripetal acceleration methods have extra computation costs on computing the difference between successive gradients as well as storage costs to maintain previous gradients. The consensus optimization and SGA require extra computations on the Jacobian related steps. Fig. 5 shows a time consuming comparison. From these comparisons, RMSProp-ACA seems competitive to other methods.

In this paper, to alleviate the difficulty in finding a local Nash equilibrium in a smooth two-player game, we were inspired to present several gradient-based methods, including Grad-SCA and Grad-ACA, which employ centripetal acceleration. The proposed methods can easily be plugged into other gradient-based algorithms like SGD, Adam or RMSProp in both simultaneous or alternating ways. From the theoretical viewpoint, we proved that both Grad-SCA and Grad-ACA have linear convergence for bilinear games under suitable conditions. We found that in a simple bilinear game, centripetal acceleration makes iterates converge to the Nash equilibrium stably; these examples also suggest that alternating methods are more preferred than simultaneous ones. In the GAN setup numerical simulations, we showed that the RMSProp-ACA can be competitive to consensus optimization and symplectic gradient adjustment methods.

However, we only consider the deterministic bilinear games theoretically and limited numerical simulations. In practical training of GANs or its variants, the associated games are much more complicated due to the randomness of computation, the online procedure and non-convexity. These issues still need further detailed studies.

Appendix A Proofs in Section 3

Proof The characteristic polynomial of the matrix (3.7) is

It follows that the eigenvalues of F1 must be the roots of the fourth order polynomials:

Proof Given an eigenvalue λ of F1, using Proposition 3.2, we have

which yields the linear convergence. ∎

From Lemma 3.1 it follows that Δt is linearly convergent. ∎

Proof Using the SVD decomposition A=UDVT, we have

According to the definition of the diagonal matrix D, the (r+1)-th component to p-th components of DUTθt and DVTϕt are zeros. Therefore, we focus on the leading r components of UTθt and VTϕt, denoted by [UTθt]1:r and [VTϕt]1:r respectively. Let Dr be the matrix composed of the leading r rows and columns of D. Then we have