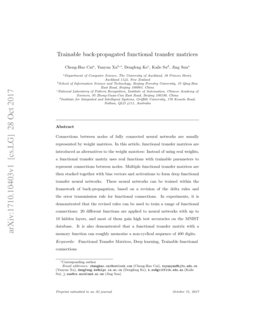 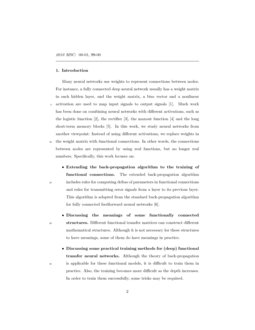 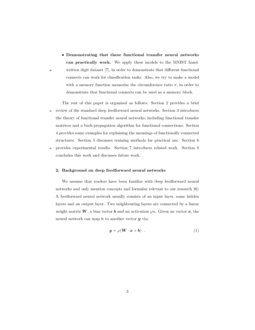 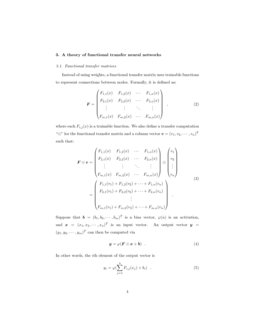 and the long short-term memory blocks

DBLP:journals/neco/HochreiterS97 . In this work, we study neural networks from another viewpoint: Instead of using different activations, we replace weights in the weight matrix with functional connections. In other words, the connections between nodes are represented by using real functions, but no longer real numbers. Specifically, this work focuses on:

We assume that readers have been familiar with deep feedforward neural networks and only mention concepts and formulae relevant to our research DBLP:journals/nn/Hecht-Nielsen88a : A feedforward neural network usually consists of an input layer, some hidden layers and an output layer. Two neighbouring layers are connected by a linear weight matrix W, a bias vector b and an activation φu. Given an vector x, the neural network can map it to another vector y via:

Instead of using weights, a functional transfer matrix uses trainable functions to represent connections between nodes. Formally, it is defined as:

where each Fi,j(x) is a trainable function. We also define a transfer computation “⊙” for the functional transfer matrix and a column vector v=(v1,v2,⋯,vn)T such that:

In other words, the ith element of the output vector is

Multiple functional transfer matrices can be stacked together with bias vectors and activations to form a multi-layer model, and the model can be trained via back-propagation DBLP:journals/nn/Hecht-Nielsen88a : Suppose that a model has L hidden layers. For the lth hidden layer, F(l) is a functional transfer matrix, its function F(l)i,j(x) is a real function with an independent variable x and r trainable parameters p(l)i,j,k(k=1,2,⋯,r), b(l)=(b(l)1,b(l)2,⋯,b(l)m)T is a bias vector, φ(l)(u) is an activation, and x(l)=(x(l)1,x(l)2,⋯,x(l)n)T is an input signal. An output signal y(l)=(y(l)1,y(l)2,⋯,y(l)m)T is computed via:

The output signal is the input signal of the next layer. In other words, if l≤L, then y(l)=x(l+1). After an error signal is evaluated by an output layer and an error function (see Section 5.2), the parameters can be updated: Suppose that δ(l)m=(δ(l)1,δ(l)2,⋯,δ(l)m)T is an error signal of output nodes, and ϵ is a learning rate. Let u(l)i=n∑j=1F(l)i,j(x(l)j)+b(l)i. Deltas of the parameters are computed via:

Deltas of the biases are the same as the conventional rule:

An error signal of the (l−1)th layer is computed via:

Periodic functions can be applied to functional transfer matrices. For instance, f(x)=A⋅sin(ω⋅x+μ) is a periodic function, where A, ω and μ are its amplitude, angular velocity and initial phase respectively. Thus, we can define a matrix consisting of the following function:

where pi,j,1, pi,j,2 and pi,j,3 are trainable parameters. If it is an M×N matrix, then it can transfer an N-dimensional vector (v1,v2,⋯,vN)T to an M-dimensional vector (u1,u2,⋯,uM)T such that ui=N∑j=1pi,j,1⋅sin(pi,j,2⋅vj+pi,j,3). It is noticeable that each ui is a composition of many periodic functions, and their amplitudes, angular velocities and initial phases can be updated via training. The training process is based on the following partial derivatives:

Similarly, this method can be extended to the cosine function.

The reason why the model can construct ellipse boundaries is that its functional transfer matrix consists of the following function:

) and a standard linear weight matrix, as the former models closed hypersurfaces, while the later models hyperplanes. In addition, to use the back-propagation algorithm to train the parameters, derivatives are computed via:

Further, an adapted version of Eq. (18) can represent not only ellipses, but also hyperbolas. The adapted function is defined as:

where ui,j is initialised as 1 or -1. Please note that ui,j is a constant, but NOT a trainable parameter. Given a 1×2 matrix with this function:

If it is initialised by:

then it can represent an ellipse boundary. On the other hand, if it is initialised by:

then it can be used to form an hyperbola boundary. More generally, in an N-dimensional space, an M×N functional transfer matrix with Eq. (22) can represent M different (N−1)-dimensional conic hypersurfaces.

In a standard neural network, connections between nodes usually do not “sleep”. The reason is that the connection from Node j to Node i is a real weight wi,j. Let xj denote a state of Node j. Node i will receive a signal wi,j⋅xj. When wi,j≠0 and xj≠0, the signal always influences Node i, regardless of whether or not Node i needs it. To enable the connections to “sleep” temporarily, the following function is used in a functional transfer matrix:

In the above function, pi,j,1 and pi,j,2 are trainable parameters, and ui,j is a constant which is initialised as 1 or -1 before training. It also makes use of the rectifier DBLP:journals/jmlr/GlorotBB11 :

The rectifier makes the function be able to “sleep”. In other words, when pi,j,1⋅x+pi,j,2≤0, Fi,j(x) must be zero. To use the back-propagation algorithm to train the parameters, derivatives are computed via:

In the above function, pi,j is a trainable parameter, and ui,j is a constant which is initialised as 1 or -1 before training. To use the back-propagation algorithm to train the parameters, derivatives are computed via:

It is noticeable that Fi,j(x), ∂Fi,j(x)∂pi,j and ∂Fi,j(x)∂x are zero when pi,j<0, which means that the function does not transfer any signal and cannot be updated in this case. In other words, the function is dead once pi,j is updated to a negative value. A matrix with this function can then represent a partially connected neural network, as dead functions can be considered as broken connections after training. A problem about the function is that it is not able to “revive”. In other words, once pi,j is updated to a negative value, it has no chance to be non-negative again. To solve this problem, an adapted version of the rectifier is used:

For the computation of ∂Fi,j(x)∂x, its derivative is:

For the computation of ∂Fi,j(x)∂pi,j, however, its derivative is arbitrarily defined as:

We use “≡” instead of “=” because this derivative is not a mathematically sound result, but a predefined value. Thus, derivatives of Fi,j(x) are computed via:

It is noticeable that ∂Fi,j(x)∂pi,j is not zero when x is not zero, which means that pi,j can be updated when it is negative. Thus, although the function is dead when pi,j is negative, it can be revived by updating pi,j to a non-negative value.

A functional transfer matrix with memory functions can be used to model sequences. For instance, given a sequential input x={x1,x2,⋯,xT}, the tth state (t=1,2,⋯,T) of a memory function Fi,j(xt) is computed via:

where pi,j,1, pi,j,2 and pi,j,3 are trainable parameters. In particular, Ci,j,t is a memory cell and its initial state Ci,j,0 is set to 0. To use the back-propagation algorithm to train the parameters, derivatives are computed via:

N input units and M hidden units, then it can record M signals. It is noticeable that the functional transfer matrix with the memory function records N−1 times more signals than the recurrent neural network.

This section discusses some practical training methods for functional transfer neural networks. These methods are also used in the experiments (Section 6).

5.1 The model structure and initialisation

shows the general structure of functional transfer neural networks: They usually have an input layer, one or more hidden layers and an output layer. Each hidden layer consists of a functional transfer matrix and some hidden units with a bias vector and an activation function. In particular, the activation function can be the logistic sigmoid function

or the hyperbolic tangent (tanh) function

The output layer consists of a linear weight matrix and N output units with a bias vector and a softmax function:

After setting up a model based on the above structure, parameters are initialised based on the following method:

are used. Finally, the parameters are updated according to their deltas. The above process can be combined with stochastic gradient descent

Training a functional transfer neural network can be more difficult when the number of hidden layers increases. To resolve this problem, the combination of layer-wise supervised training111For details about layer-wise supervised training, please also refer to Algorithm 7 in the appendix of the referenced paper. and fine-tuning is used DBLP:conf/nips/BengioLPL06 , which is shown by Fig. 3

. Layer-wise training includes the following steps: Firstly, the first hidden layer is trained, while the other hidden layers and the output layer are ignored. To train this layer, a new softmax layer (with a linear weight matrix and a bias vector) is added onto it, and the method for training a single hidden layer (described by Section

Table 1 provides 20 example functions which are used to construct functional transfer neural networks. Fi,j(x) in the functional matrix (See Eq. (2)) is substituted for these example functions. In particular, pi,j, qi,j and ri,j are used to denote trainable parameters instead of using pi,j,k. These functions include all functions discussed in Section 4, except the memory function in Section 4.4: F06, F07, and F08 have been discussed in Section <a class="ltx_ref" href="#S4.SS3" title="4.3 Sleeping weights and dead weights ‣ 4 Examples ‣ Trainable back-propagated functional transfer matrices"