Tractability properties of the discrepancy in Orlicz norms

We show that the minimal discrepancy of a point set in the d-dimensional unit cube with respect to Orlicz norms can exhibit both polynomial and weak tractability. In particular, we show that the ψ_α-norms of exponential Orlicz spaces are polynomially tractable. 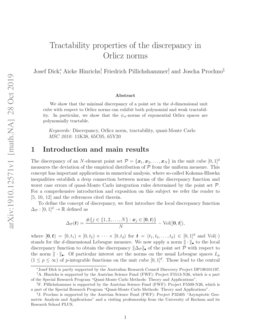 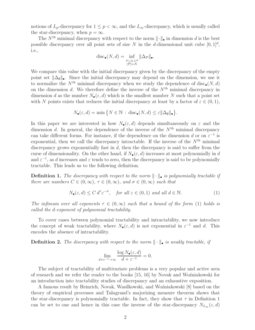 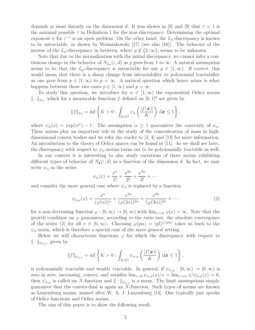 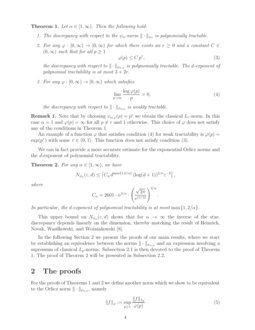 This paper is devoted to the study of a discrepancy-type characteristic ...
Vladimir Temlyakov, et al. ∙

Engaging in Dialogue about an Agent's Norms and Behaviors

We present a set of capabilities allowing an agent planning with moral a...
Daniel Kasenberg, et al. ∙

On the fixed volume discrepancy of the Korobov point sets

This paper is devoted to the study of a discrepancy-type characteristic ...
A. S. Rubtsova, et al. ∙

Sum-of-norms clustering does not separate nearby balls

Implicit Regularization Effects of the Sobolev Norms in Image Processing

In this paper, we propose to use the general L^2-based Sobolev norms (i....
Yunan Yang, et al. ∙

The discrepancy of an N-element point set P={x1,x2,…,xN} in the unit cube [0,1]d measures the deviation of the empirical distribution of P from the uniform measure. This concept has important applications in numerical analysis, where so-called Koksma-Hlawka inequalities establish a deep connection between norms of the discrepancy function and worst case errors of quasi-Monte Carlo integration rules determined by the point set P. For a comprehensive introduction and exposition on this subject we refer the reader to [5, 10, 12] and the references cited therein.

To define the concept of discrepancy, we first introduce the local discrepancy function ΔP:[0,1]d→R defined as

where [0,t)=[0,t1)×[0,t2)×⋯×[0,td) for t=(t1,t2,…,td)∈[0,1]d and Vol(⋅) stands for the d-dimensional Lebesgue measure. We now apply a norm ∥⋅∥∙ to the local discrepancy function to obtain the discrepancy ∥ΔP∥∙ of the point set P with respect to the norm ∥⋅∥∙. Of particular interest are the norms on the usual Lebesgue spaces Lp (1≤p≤∞) of p-integrable functions on the unit cube [0,1]d. Those lead to the central notions of Lp-discrepancy for 1≤p<∞, and the L∞-discrepancy, which is usually called the star-discrepancy, when p=∞.

The Nth minimal discrepancy with respect to the norm ∥⋅∥∙ in dimension d is the best possible discrepancy over all point sets of size N in the d-dimensional unit cube [0,1]d, i.e.,

In this paper we are interested in how N∙(ε,d) depends simultaneously on ε and the dimension d. In general, the dependence of the inverse of the Nth minimal discrepancy can take different forms. For instance, if the dependence on the dimension d or on ε−1 is exponential, then we call the discrepancy intractable. If the inverse of the Nth minimal discrepancy grows exponentially fast in d

, then the discrepancy is said to suffer from the curse of dimensionality. On the other hand, if

N∙(ε,d) increases at most polynomially in d and ε−1, as d increases and ε tends to zero, then the discrepancy is said to be polynomially tractable. This leads us to the following definition.

The infimum over all exponents τ∈(0,∞) such that a bound of the form (1) holds is called the d-exponent of polynomial tractability.

The discrepancy with respect to the norm ∥⋅∥∙ is weakly tractable, if

The subject of tractability of multivariate problems is a very popular and active area of research and we refer the reader to the books [15, 16] by Novak and Woźniakowski for an introduction into tractability studies of discrepancy and an exhaustive exposition.

A famous result by Heinrich, Novak, Wasilkowski, and Woźniakowski [8] based on the theory of empirical processes and Talagrand’s majorizing measure theorem shows that the star-discrepancy is polynomially tractable. In fact, they show that τ in Definition 1 can be set to one and hence in this case the inverse of the star-discrepancy NL∞(ε,d) depends at most linearly on the dimension d. It was shown in [8] and [9] that τ=1 is the minimal possible τ in Definition 1 for the star-discrepancy. Determining the optimal exponent σ for ε−1 is an open problem. On the other hand, the L2-discrepancy is known to be intractable, as shown by Woźniakowski [17] (see also [16]). The behavior of the inverse of the Lp-discrepancy in between, where p∉{2,∞}, seems to be unknown.

Note that due to the normalization with the initial discrepancy, we cannot infer a continuous change in the behavior of NLp(ε,d) as p goes from 1 to ∞. A natural assumption seems to be that the Lp-discrepancy is intractable for any p∈[1,∞). If correct, this would mean that there is a sharp change from intractability to polynomial tractability as one goes from p∈[1,∞) to p=∞. A natural question which hence arises is what happens between those two cases p∈[1,∞) and p=∞.

To study this question, we introduce for α∈[1,∞) the exponential Orlicz norms ∥⋅∥ψα, which for a measurable function f defined on [0,1]d are given by

where ψα(x)=exp(xα)−1. The assumption α≥1 guarantees the convexity of ψα. These norms play an important role in the study of the concentration of mass in high-dimensional convex bodies and we refer the reader to [3, 4] and [13] for more information. An introduction to the theory of Orlicz spaces can be found in [11]. As we shall see later, the discrepancy with respect to ψα-norms turns out to be polynomially tractable as well.

In our context it is interesting to also study variations of these norms exhibiting different types of behavior of N∙(ε,d) as a function of the dimension d. In fact, we may write ψα as the series

for a non-decreasing function φ:[0,∞)→[0,∞) with limx→∞φ(x)=∞. Note that the growth condition on φ guarantees, according to the ratio test, the absolute convergence of the series (2) for all x∈[0,∞). Choosing φ(pα)=(p!)1/(pα) takes us back to the ψα-norm, which is therefore a special case of the more general setting.

Below we will characterize functions φ for which the discrepancy with respect to ∥⋅∥ψα,φ, given by

is polynomially tractable and weakly tractable. In general, if ψα,φ:[0,∞)→[0,∞) is zero in zero, increasing, convex, and satisfies limx→0ψα,φ(x)/x=limx→∞x/ψα,φ(x)=0, then ψα,φ is called an N-function and ∥⋅∥ψα,φ is a norm. The limit assumptions simply guarantee that the convex-dual is again an N-function. Such types of norms are known as Luxemburg norms, named after W. A. J. Luxemburg [14]. One typically just speaks of Orlicz functions and Orlicz norms.

The aim of this paper is to show the following result.

Note that by choosing ψα,φ(p)=pr we obtain the classical Lr-norm. In this case α=1 and φ(p)=∞ for all p≠r and 1 otherwise. This choice of φ does not satisfy any of the conditions in Theorem 1.

An example of a function φ that satisfies condition (4) for weak tractability is φ(p)=exp(pτ) with some τ∈(0,1). This function does not satisfy condition (3).

In particular, the d-exponent of polynomial tractability is at most max{1,2/α}.

This upper bound on Nψα(ε,d) shows that for α→∞ the inverse of the star-discrepancy depends linearly on the dimension, thereby matching the result of Heinrich, Novak, Wasilkowski, and Woźniakowski [8].

For the proofs of Theorems 1 and 2 we define another norm which we show to be equivalent to the Orlicz norm ∥⋅∥ψα,φ, namely

with φ:[0,∞)→[0,∞). In the special case of exponential Orlicz norms ∥⋅∥ψα such an equivalence is a classical result in asymptotic geometric analysis and may be found, without explicit constants, in the monographs [3, Lemma 3.5.5] and [4, Lemma 2.4.2]. In the context of this paper it is important that these constants do not depend on the dimension d.

Using the series expansion of ψα,φ, we obtain

In the opposite direction, we need to choose K∈(0,∞) such that

We are now prepared to present the proofs of our main results.

An important consequence of Lemma 1 is that the constants do not depend on the dimension, and hence the Orlicz norm discrepancy satisfies the same tractability properties as the discrepancy with respect to the norm ∥⋅∥φ. Therefore in the following proof we will only use the latter norm.

If p=∞, then the initial discrepancy is 1 for every dimension d∈N. This implies that

where we used the choice p=d to obtain the last inequality.

where discφ(N,d) stands for the discrepancy with respect to the norm ∥⋅∥φ introduced in (5). This implies that

where for x∈R, ⌈x⌉:=min{n∈Z:n≥x}. This concludes the proof of the second statement in Theorem 1. As mentioned above, if we choose φ(αp)=(p!)1/(αp), then we obtain the ψα-norm. Using Stirling’s formula (8) together with the previous result, we can deduce the first part of Theorem 1.

In order to prove the third part of Theorem 1, we apply the logarithm to Nφ(ε,d). From (2.1) we obtain that

This implies weak tractability of the discrepancy with respect to ∥⋅∥ψα,φ. \qed

First we show the corresponding result for Nα(ε,d) which is based on the norm ∥⋅∥α. Recall that for a measurable function f:[0,1]d→R, we defined ∥f∥α=supp≥1p−1/α∥f∥Lp. Let us start with a lower bound for the initial discrepancy. We have

where we have chosen p=dlog(d+1). The final estimate follows from the fact that

Now let d∈N. Then from Gnewuch [6, Theorem 3] we obtain that

consisting of independent and uniformly distributed points. Now Markov’s inequality implies that there exists an

For this point set P, we obtain

Using the second part of Lemma 1, we obtain

From this we finally obtain the upper bound for Nψα(ε,d). \qed