U-Net and its variants have been demonstrated to work sufficiently well in biological cell tracking and segmentation. However, these methods still suffer in the presence of complex processes such as collision of cells, mitosis and apoptosis. In this paper, we augment U-Net with Siamese matching-based tracking and propose to track individual nuclei over time. By modelling the behavioural pattern of the cells, we achieve improved segmentation and tracking performances through a re-segmentation procedure. Our preliminary investigations on the Fluo-N2DH-SIM+ and Fluo-N2DH-GOWT1 datasets demonstrate that absolute improvements of up to 3.8 segmentation and tracking accuracy, respectively. 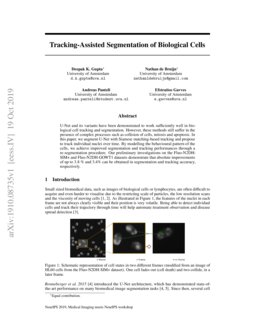 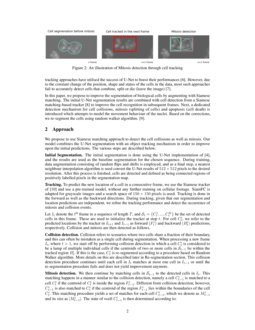 Small sized biomedical data, such as images of biological cells or lymphocytes, are often difficult to acquire and even harder to visualise due to the restricting scale of particles, the low resolution scans and the viscosity of moving cells Saltz et al. (2018); Swiderska-Chadaj et al. (2019). As illustrated in Figure 1, the features of the nuclei in each frame are not always clearly visible and their position is very volatile. Being able to detect individual cells and track their trajectory through time will help automate treatment observation and disease spread detection Coudray et al. (2018).

Ronneberger et al. 2015 [7] introduced the U-Net architecture, which has demonstrated state-of-the-art performance on many biomedical image segmentation tasks Ronneberger et al. (2015); Falk et al. (2019). Since then, several cell tracking approaches have utilised the success of U-Net to boost their performances Li et al. (2018). However, due to the constant change of the position, shape and status of the cells in the data, most such approaches fail to accurately detect cells that combine, split or die (leave the image) Christ et al. (2016).

In this paper, we propose to improve the segmentation of biological cells by augmenting with Siamese matching. The initial U-Net segmentation results are combined with cell detection from a Siamese matching-based tracker Tao et al. (2016) to improve the cell recognition in subsequent frames. Next, a dedicated detection mechanism for cell collisions, mitosis (splitting of cells) and apoptosis (cell death) is introduced which attempts to model the movement behaviour of the nuclei. Based on the corrections, we re-segment the cells using random walker algorithm. Grady (2006).

We propose to use Siamese matching approach to detect the cell collisions as well as mitosis. Our model combines the U-Net segmentation with an object tracking mechanism in order to improve upon the initial predictions. The various steps are described below.

, and the results are used as the baseline segmentation for the chosen sequence. During training, data augmentation consisting of random flips and shifts is employed, and as a final step, a nearest neighbour interpolation algorithm is used convert the U-Net results of

512×512 pixels to the desired resolution. After this process is finished, cells are detected and defined as being connected regions of positively labelled pixels in the segmentation map.

Tracking. To predict the new location of a cell in a consecutive frame, we use the Siamese tracker of Bertinetto et al. (2016) and use a pre-trained model, without any further training on cellular footage. SiamFC is adapted for grayscale images and a search space of 150×150 pixels is used. Tracking is done in the forward as well as the backward directions. During tracking, given that our segmentation and location predictions are independent, we refine the tracking performance and detect the occurrence of mitosis and collision events.

Let It denote the tth frame in a sequence of length T, and St={C1t,...,CKt} be the set of detected cells in this frame. These are used to initialize the tracker at step t. For cell Cit, we refer to the predicted locations by the tracker in It+1 and It−1 as forward (Fit) and backward (Bit) predictions, respectively. Collision and mitosis are then detected as follows.

Collision detection. Collision refers to scenarios where two cells share a fraction of their boundary, and this can often be mistaken as a single cell during segmentation. When processing a new frame It, where t>1, we start off by performing collision detection in which a cell Cit is considered to be a lump of multiple individual cells if the centroids of two or more cells in St−1 lie within the tracked region Bit. If this is the case, Cit is re-segmented according to a procedure based on Random Walker algorithm. More details on this are described later in Re-segmentation section. This collision detection procedure continues until each cell in It matches at most one cell in It−1 or until the re-segmentation procedure fails and does not yield improvement anymore.

Mitosis detection. We then continue by matching cells in St−1 to the detected cells in It. This matching happens in a manner similar to the collision detection, namely a cell Cit−1 is matched to a cell Cit if the centroid of Cit is inside the region Fit−1. Different from collision detection, however, Cit−1 is also matched to Cit if the centroid of the region Fit−1 lies within the boundaries of the cell Cit. This matching procedure yields a set of matches for each cell Cit−1, which we denote as Mit−1 and its size as |Mit−1|. The state of =cell Cit−1 is then determined according to:

In case of mitosis, the cell splits, thus the tracking of Cit−1 ends and the cells in |Mit−1| are initialised with two new trackers which have Cit−1 as their parent. After continuations have been determined for all cells in St−1, cells in St that are not linked to any cell in It−1 are interpreted as newly detected cells which start their life in It without link to a parent cell. An illustration is shown in Figure 2.

The increased performance of the method proposed by this work indicates that the mitosis, apoptosis and cell fusion interpretation of the collision detection mechanism indeed help the tracker network improve the segmentation performance. Furthermore, this finding highlights the importance of modelling the movement behaviour of the cells to better capture the pattern nature of cells in consecutive frames.

Deep learning trackers such as U-Net work well on biological cell tracking problems. However, they still suffer in the presence of events such as cell collisions, mitosis and apoptosis. In this work, we proposed to combine Siamese matching Tao et al. (2016); Bertinetto et al. (2016) with U-Net Ronneberger et al. (2015) to accurately identify these difficult scenarios. Siamese matching-based detection efficiently provides a more precise understanding and modelling of individual cells, thereby providing better grasp of latent information about them. Based on the proposed approach, we obtained absolute improvements of up to 3.8 % and 3.4% for segmentation and tracking accuracy, respectively. Our future work includes rigorously testing the proposed methodology on a more diverse set of cell tracking data.