High-dimensional data, where the number of variables exceeds or is comparable to the sample size, is now pervasive in many scientific applications. In recent years, Bayesian shrinkage models have been developed as effective and computationally feasible tools to analyze such data, especially in the context of linear regression. In this paper, we focus on the Normal-Gamma shrinkage model developed by Griffin and Brown. This model subsumes the popular Bayesian lasso model, and a three-block Gibbs sampling algorithm to sample from the resulting intractable posterior distribution has been developed by Griffin and Brown. We consider an alternative two-block Gibbs sampling algorithm and rigorously demonstrate its advantage over the three-block sampler by comparing specific spectral properties. In particular, we show that the Markov operator corresponding to the two-block sampler is trace class (and hence Hilbert-Schmidt), whereas the operator corresponding to the three-block sampler is not even Hilbert-Schmidt. The trace class property for the two-block sampler implies geometric convergence for the associated Markov chain, which justifies the use of Markov chain CLT's to obtain practical error bounds for MCMC based estimates. Additionally, it facilitates theoretical comparisons of the two-block sampler with sandwich algorithms which aim to improve performance by inserting inexpensive extra steps in between the two conditional draws of the two-block sampler. 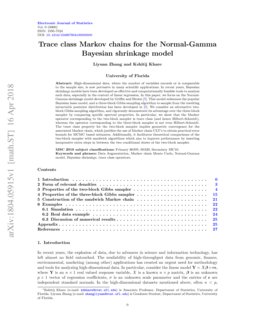 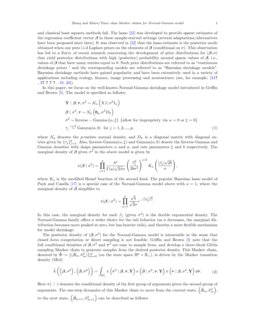 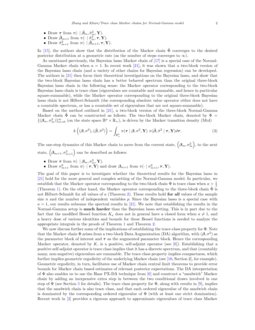 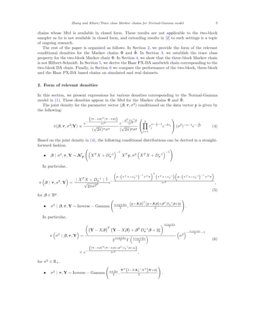 In recent years, the explosion of data, due to advances in science and information technology, has left almost no field untouched. The availability of high-throughput data from genomic, finance, environmental, marketing (among other) applications has created an urgent need for methodology and tools for analyzing high-dimensional data. In particular, consider the linear model Y=Xβ+σϵ, where Y is an n×1

X is a known n×p matrix, β is an unknown p×1vector of regression coefficients, σ is an unknown scale parameter and the entries of ϵ are independent standard normals. In the high-dimensional datasets mentioned above, often n<p, and classical least squares methods fail. The lasso [22] was developed to provide sparse estimates of the regression coefficient vector β in these sample-starved settings (several adaptations/alternatives have been proposed since then). It was observed in [22] that the lasso estimate is the posterior mode obtained when one puts i.i.d Laplace priors on the elements of β (conditional on σ). This observation has led to a flurry of recent research concerning the development of prior distributions for (β,σ)

β, i.e., values of β that have many entries equal to 0. Such prior distributions are referred to as “continuous shrinkage priors " and the corresponding models are referred to as “Bayesian shrinkage models". Bayesian shrinkage methods have gained popularity and have been extensively used in a variety of applications including ecology, finance, image processing and neuroscience (see, for example, [24, deloscampos2009, 3, jacquemin2014, xing2012, mishchenko2012, gu2013, 19, 20]).

In this paper, we focus on the well-known Normal-Gamma shrinkage model introduced in Griffin and Brown [5]. The model is specified as follows:

where Np denotes the p-variate normal density, and Dτ is a diagonal matrix with diagonal entries given by {τj}pj=1. Also, Inverse-Gamma(α,ξ) and Gamma(a,b) denote the Inverse-Gamma and Gamma densities with shape parameters α and a, and rate parameters ξ and b respectively. The marginal density of β given σ2 in the above model is given by

where Ka is the modified Bessel function of the second kind. The popular Bayesian lasso model of Park and Casella [17] is a special case of the Normal-Gamma model above with a=1, where the marginal density of β simplifies to

In this case, the marginal density for each βj (given σ2) is the double exponential density. The Normal-Gamma family offers a wider choice for the tail behavior (as a decreases, the marginal distribution becomes more peaked at zero, but has heavier tails), and thereby a more flexible mechanism for model shrinkage.

The posterior density of (β,σ2) for the Normal-Gamma model is intractable in the sense that closed form computation or direct sampling is not feasible. Griffin and Brown [5] note that the full conditional densities of β,σ2 and τ2 are easy to sample from, and develop a three-block Gibbs sampling Markov chain to generate samples from the desired posterior density. This Markov chain, denoted by ~Φ:={(~βm,~σ2m)}∞m=0 (on the state space Rp×R+), is driven by the Markov transition density (Mtd)

Based on the method outlined in [21], a two-block version of the three-block Normal-Gamma Markov chain ~Φ can be constructed as follows. The two-block Markov chain, denoted by Φ={(βm,σ2m)}∞m=0 (on the state space Rp×R+), is driven by the Markov transition density (Mtd)

The one-step dynamics of this Markov chain to move from the current state, (βm,σ2m), to the next state, (βm+1,σ2m+1) can be described as follows:

The goal of this paper is to investigate whether the theoretical results for the Bayesian lasso in [21] hold for the more general and complex setting of the Normal-Gamma model. In particular, we establish that the Markov operator corresponding to the two-block chain Φ is trace class when a>12 (Theorem 1). On the other hand, the Markov operator corresponding to the three-block chain ~Φ is not Hilbert-Schmidt for all values of a (Theorem 2). These results hold for all values of the sample size n and the number of independent variables p. Since the Bayesian lasso is a special case with a=1, our results subsume the spectral results in [21]. We note that establishing the results in the Normal-Gamma setup is much harder than the Bayesian lasso setting. This is in part due to the fact that the modified Bessel function Ka does not in general have a closed form when a≠1, and a heavy dose of various identities and bounds for these Bessel functions is needed to analyze the appropriate integrals in the proofs of Theorem 1 and Theorem 2.

We now discuss further some of the implications of establishing the trace-class property for Φ. Note that the Markov chain Φ arises from a two-block Data Augmentation (DA) algorithm, with (β,σ2) as the parameter block of interest and τ as the augmented parameter block. Hence the corresponding Markov operator, denoted by K, is a positive, self-adjoint operator (see [6]). Establishing that a positive self-adjoint operator is trace class implies that it has a discrete spectrum, and that (countably many, non-negative) eigenvalues are summable. The trace class property implies compactness, which further implies geometric ergodicity of the underlying Markov chain (see [16, Section 2]

, for example). Geometric ergodicity, in turn, facilitates use of Markov chain central limit theorems to provide error bounds for Markov chain based estimates of relevant posterior expectations. The DA interpretation of

Φ also enables us to use the Haar PX-DA technique from [6] and construct a “sandwich" Markov chain by adding an inexpensive extra step in between the two conditional draws involved in one step of Φ (see Section 5 for details). The trace class property for Φ, along with results in [9], implies that the sandwich chain is also trace class, and that each ordered eigenvalue of the sandwich chain is dominated by the corresponding ordered eigenvalue of Φ (with at least one strict domination). Recent work in [2] provides a rigorous approach to approximate eigenvalues of trace class Markov chains whose Mtd is available in closed form. These results are not applicable to the two-block sampler as its is not available in closed form, and extending results in [2] to such settings is a topic of ongoing research.

In this section, we present expressions for various densities corresponding to the Normal-Gamma model in (1). These densities appear in the Mtd for the Markov chains Φ and ~Φ.

The joint density for the parameter vector (β,τ,σ2) conditioned on the data vector y is given by the following:

Based on the joint density in (4), the following conditional distributions can be derived in a straightforward fashion.

3 Properties of the two-block Gibbs sampler

In this section, we show that the operator associated with the two-block Gibbs sampler Φ, with Markov transition density k specified in (3) is trace class when a>12 and is not trace class when 0<a≤12.

For all values of n and p, the Markov operator corresponding to the two-block Markov chain Φ is trace class (and hence Hilbert-Schmidt) when a>12 and is not trace class when 0<a≤12.

Proof In the current setting, the trace class property is equivalent to the finiteness of the integral (see [16, Section 2], for example)

By the definition of k, we have

As a first step, we will gather all the terms with τ, and then focus on finding an upper bound for the inner integral with respect to τ. Using (5), (7) and (8), we get,

and (a′) follows from

We now focus on the inner integral in (LABEL:eq:cond6) defined by

Let λ denote the largest eigenvalue of XTX. Using the definition of Aτ, it follows that

We now examine a generic term of the sum in (LABEL:eq:cond7). Note that cj and cj√τj are both (unnormalized) GIG densities. Hence, for any subset L={ℓ1,ℓ2,⋯,ℓm} of {1,2,⋯,p}, using the form of the GIG density, we get

By (LABEL:eq:cond6) and (12), the trace class property will be established if we show that for every L⊆{1,2,⋯,p}, the integral

is finite. We proceed to show this by first simplifying the inner integral with respect to β. Using the form of the Gamma density, we get

As discussed above, this establishes the trace class property in the case a>1.

In this case, we first note that all arguments in Case 1 go through verbatim until (14). Next, we note that