Retinal artery/vein (A/V) classification lays the foundation for the quantitative analysis of retinal vessels, which is associated with potential risks of various cardiovascular and cerebral diseases. The topological connection relationship, which has been proved effective in improving the A/V classification performance for the conventional graph based method, has not been exploited by the deep learning based method. In this paper, we propose a Topology Ranking Generative Adversarial Network (TR-GAN) to improve the topology connectivity of the segmented arteries and veins, and further to boost the A/V classification performance. A topology ranking discriminator based on ordinal regression is proposed to rank the topological connectivity level of the ground-truth, the generated A/V mask and the intentionally shuffled mask. The ranking loss is further back-propagated to the generator to generate better connected A/V masks. In addition, a topology preserving module with triplet loss is also proposed to extract the high-level topological features and further to narrow the feature distance between the predicted A/V mask and the ground-truth. The proposed framework effectively increases the topological connectivity of the predicted A/V masks and achieves state-of-the-art A/V classification performance on the publicly available AV-DRIVE dataset. 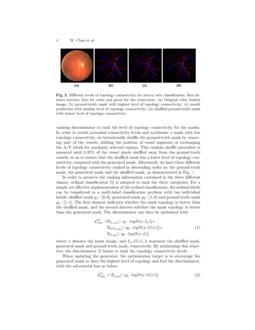 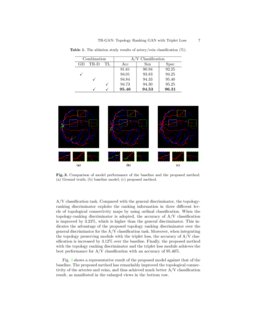 Can GAN Learn Topological Features of a Graph?

Morphological changes of retinal arteries and veins have been reported to be associated with potential risks of various systemic, cardiovascular and cerebral diseases [17, 2]. For example, it is reported that narrowing of arteries and widening of veins are associated with the increased risk of stroke [7]. In addition, research has also found that the narrowing of retinal arteriolar caliber is related to the risk of hypertension and developing diabetes [2, 11]. Therefore, accurate A/V classification is of strong clinical interest.

Automatic A/V classification has been actively investigated in recent years. Previous works are generally performed in a two-stage manner [12, 18, 3, 4, 20, 21]

, which requires vessel segmentation in the first stage and then classifies individual pixels on the vessel or centerline into either A/V. Depending on whether topological structure is used in the procedure, those works can be further categorized into pure feature based methods

In order to fill this gap, a Topology Ranking Generative Adversarial Network (TR-GAN) is proposed in this paper, which tries to increase the topological connectivity of arteries and veins, and further improves the A/V classification performance. This paper is the first work trying to increase topology connectivity for the A/V classification task with a deep learning based framework. Three major contributions are made with this paper. Firstly, instead of using a general discriminator in adversarial learning that distinguishes the ground-truth (real) mask from the generated (fake) mask, a topology ranking discriminator based on ordinal regression is proposed to rank the topological connectivity of the real mask, the fake mask and the intentionally shuffled mask. The ranking loss is further back-propagated to encourage the segmentation network to produce A/V masks with higher topological connectivity. Secondly, a topology preserving module with triplet loss is also proposed to extract the high-level topological features from the generated mask, based on which further to narrow the feature distance between the generated mask and the ground-truth mask. Last but not least, the proposed framework achieves the state-of-the-art performance on the publicly available AV-DRIVE dataset for the A/V classification, surpassing the most recent approaches with a remarkable margin.

Fig. 1 shows the architecture of the proposed Topology Ranking GAN (TR-GAN) framework for the retinal A/V classification task. The overall architecture consists of three parts: (1) the segmentation network as the generator, (2) the topology ranking discriminator and (3) the topology preserving module with triplet loss. For the segmentation network, we adopt the widely used U-Net [14]

architecture with a pretrained ResNet-18 as the encoder, and the decoder outputs a three-channel probability map for artery, vein and vessel segmentation. The generated mask is then concatenated with the original input image and fed to the topology ranking discriminator to evaluate the topological connectivity, similar for the ground-truth mask and the shuffled mask. A topology ranking adversarial loss is then calculated and back-propagated to update the generator.

Moreover, these three masks are also fed to the topology preserving module, which extracts the high-level topological features with a pretrained VGG-19 backbone [15]. The extracted features are further used to construct a triplet loss that tries to narrow the feature distance between the ground-truth mask and the generated mask.

In this paper, the discriminator adopts the PatchGAN structure [8] and contains six convolutional layers. Input to the discriminator is conditioned by concatenating the input images and the A/V masks, so as to ensure that the generated masks are relevant to the corresponding original image content.

In order to preserve the ranking information contained in the three different classes, ordinal classification [5] is adopted to rank the three categories. For a simple yet effective implementation of the ordinal classification, the ordinal labels can be transferred to a multi-label classification problem with two individual labels: shuffled mask y1:[0,0], generated mask y2:[1,0] and ground-truth mask y3:[1,1]. The first element indicates whether the mask topology is better than the shuffled mask, and the second denotes whether the mask topology is better than the generated mask. The discriminator can then be optimized with:

where x denotes the input image, and Ls,G(x),L represent the shuffled mask, generated mask and ground-truth mask, respectively. By minimizing this objective, the discriminator D learns to rank the topology connectivity levels.

When updating the generator, the optimization target is to encourage the generated mask to have the highest level of topology and fool the discriminator, with the adversarial loss as below:

Pixel-wise losses, including the binary cross entropy loss and L1/L2 loss, can only measure the low-level pixel-wise difference between the segmented mask and the ground-truth, which often fail to measure the high-level topology difference. Therefore, we propose to calculate the distance of features extracted by a pretrained model, which is expected to contain high-level topological information

. In this paper, a VGG-19 backbone pretrained on ImageNet is adopted to extract the feature maps. A triplet loss is further proposed to narrow the feature distance between the ground-truth mask and the generated mask.

where α is the margin hyper-parameter and set to 1 by default in this research; N denotes the total number of network layers where we extract feature maps from. In this paper N

2nd,4th,6th and 8th convolutional blocks. di1 and di2 represent the distance of anchor-positive and anchor-negative pairs for the ith layer of the feature extraction network, and can be obtained with:

where Ci,Wi,Hi denote the channel number, width and height, respectively, for the feature maps of the ith layer; Fi denotes the mapping function for the ith model layer.

During the training stage, patches with the dimension of 256×256

pixels are randomly extracted from the fundus images and fed to the network. In the test stage, we extract the ordered patches at the stride of 50 and then stitch the corresponding predictions together to obtain final results. All experiments are performed on an NVIDIA Tesla P40 GPU with 24 GB of memory. The generator and discriminator are optimized alternatively with the Adam optimizer for the maximum of 30,000 iterations and a batch size of 4. The initial learning rate is set as

Detailed ablation studies have been conducted to evaluate the effectiveness of different modules in the proposed framework, including the topology ranking discriminator (TR-D) and the topology preserving module with the triplet loss (TL). In addition, in order to better assess the advantage of the proposed topology ranking discriminator against general discriminators (GD) that distinguishes the real from fake masks, related experiments have also been performed. In order to compare the proposed model under the same criteria with other methods in the literature, A/V classification performance is evaluated on the segmented vessel pixels with three metrics, including accuracy (Acc), sensitivity (Sen) and specificity (Spec). By treating arteries as positives and veins as negatives, Sen and Spec reflect the model’s capability of detecting arteries and veins, respectively. Although the existing methods evaluated the A/V classification performance on the segmented vessels only, we evaluate the performance on all the ground truth artery/vein pixels, which is a relatively stricter criterion than that on the segmented vessels, since the classification of major vessels is comparatively an easier task if capillary vessels are not segmented.

Fig. 3 shows a representative result of the proposed model against that of the baseline. The proposed method has remarkably improved the topological connectivity of the arteries and veins, and thus achieved much better A/V classification result, as manifested in the enlarged views in the bottom row.

Table 2 lists the A/V classification performance comparison between the proposed framework and related methods in the literature for both AV-DRIVE and INSPIRE-AVR datasets. Among the compared research works, the methods proposed by Xu et al. [19] and Ma et al. [9] are deep learning based, which predict the artery and vein maps simultaneously; meanwhile the rest [3, 4, 21, 16] are graph based methods, which extract the individual vessel tree structures first and then classify vessels into arteries and veins via a multi-step strategy. When evaluating under the same criteria with existing methods, the proposed method achieves an A/V classification accuracy of 96.29% for the AV-DRIVE dataset, with a remarkable margin of 1.59% over the current state-of-the-art method [16].

For the INSPIRE-AVR dataset, when comparing with deep learning based methods under the same evaluation criteria without fine-tuning, the proposed framework surpasses the methods proposed by Xu et al. [19] and Ma et al. [9], with an accuracy improvement of 14.2% and 1.8% respectively, indicating the generalization capability of the proposed model. However, when compared to the graph based methods, the performance of the proposed method is not as good as that of Zhao et al. [21] and Srinidhi et al. [16]. This is primarily resulted by the fact that both of the two aforementioned methods are trained and tested on the INSPIRE-AVR dataset, meanwhile the proposed method is only trained on AV-DRIVE and then predicts on INSPIRE-AVR without further training or fine-tuning. Since the INSPIRE-AVR dataset is quite different from the AV-DRIVE dataset in terms of image color, resolution and field-of-view, it is reasonable that the performance is not as good as that on the AV-DRIVE dataset.

In this paper, we proposed a novel framework with topology ranking GAN and topology preserving triplet loss for the retinal artery/vein classification task. The proposed framework takes advantage of the topological connectivity of arteries and veins, to further improve the A/V classification performance. Detailed ablation and comparison studies on two publicly available datasets validated the effectiveness of the proposed method, which has achieved state-of-the-art performance on the AV-DRIVE dataset with a remarkable margin over the current best method. To the best of our knowledge, this is the first research that tries to exploit topology information for A/V classification with deep learning based frameworks.

On the basis of the current research, future work will continue to explore the feasibility of a fully automated vascular parameter quantization system, which is expected to facilitate the clinical biomarker study of how various cardiovascular and cerebral diseases affect the retinal vessels.