Deep neural networks have shown striking progress and obtained state-of-the-art results in many AI research fields in the recent years. However, it is often unsatisfying to not know why they predict what they do. In this paper, we address the problem of interpreting Visual Question Answering (VQA) models. Specifically, we are interested in finding what part of the input (pixels in images or words in questions) the VQA model focuses on while answering the question. To tackle this problem, we use two visualization techniques -- guided backpropagation and occlusion -- to find important words in the question and important regions in the image. We then present qualitative and quantitative analyses of these importance maps. We found that even without explicit attention mechanisms, VQA models may sometimes be implicitly attending to relevant regions in the image, and often to appropriate words in the question. 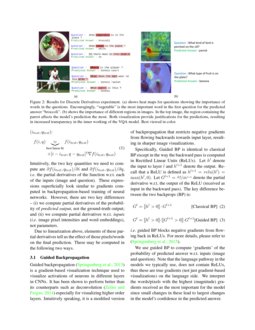 Unfortunately, when today’s machine perception and intelligent systems fail, they fail in a spectacularly disgraceful manner, without warning or explanation, leaving the user staring at an incoherent output, wondering why the system did what it did.

In this work, we focus on Visual Question Answering, where given an image and a free-form natural language question about the image, (e.g., “What color are the girl’s shoes?”, or “Is the boy jumping?”), the machine has to produce a natural language answer as its output (e.g. “blue”, or “yes”). Specifically, we try to interpret a recent state-of-art VQA model [Lu et al.2015] trained on recently released VQA [Antol et al.2015]

Sustained interactions111Demo available here: http://cloudcv.org/vqa/ [Agrawal et al.2015] with the system make it clear that the system has a non-trivial level of intelligence (e.g., it is able to recognize people, objects, in the image). However, it is deeply unsatisfying to not know why the system predicts what it does (especially the glaring mistakes). The root cause is lack of transparency or interpretability

. With a few rare exceptions, the emphasis in machine learning, computer vision, and AI communities today is on building systems with good predictive performance, not

transparency. As a result, the users of these intelligent systems perceive them as inscrutable black boxes that cannot be understood or trusted.

We are interested in the question of transparency – why does a VQA system do what it does? (See fig:teaser). Specifically, what evidence in the test input (image and question) supports a particular prediction? In the context of VQA, this question can be expressed as two subproblems:

In this work, we use two visualization methods to tackle the above problems. The first method (sec:guidedback) uses guided backpropagation [Springenberg et al.2015] to analyze important words in the question and important regions in the image. In the second method (sec:occlusion), we occlude portions of input and observe the change in prediction probabilities of the model, to compute importance of question words and image regions. In sec:results, we present qualitative and quantitative analyses of these image/question ‘importance maps’ – question importance maps are analyzed using their Part-of-Speech (POS) tags; image importance maps are compared to ‘human attention maps’ or maps showing where humans look for answering a question about the image [Das et al.2016]. We found that even without explicit attention mechanisms, VQA models may sometimes be implicitly attending to relevant regions in the image, and often to appropriate words in the question.

Many gradient based methods [Zeiler and Fergus2014, Simonyan et al.2014, Springenberg et al.2015] have been proposed in recent years in the field of computer vision to visualize deep convolutional neural networks. But most of them focused on the task of image classification on iconic images where the main object occupies most of the image. Our work differs in 2 ways – 1) we also compute gradients the input question, and 2) we use guided backpropagation [Springenberg et al.2015] for the task of VQA, where the model can look at different regions in the same image for different questions. As per our literature review, we are the first to study this problem for VQA.

Our occlusion experiment is inspired by [Zeiler and Fergus2014] who mask small regions in the image with a gray patch, and observe the output of an image classification model. We evaluate if the model looks at the same regions in the image as humans do, while answering a question about the image.

A few recent works [Ribeiro et al.2016, Baehrens et al.2010, Liu and Wang2012] have begun to study the task of providing interpretable post-hoc explanations for classifier predictions. Such methods typically involve fitting or training a secondary interpretable mechanism on top of the base ‘black-box’ classifier predictions. In contrast, our work directly computes importance maps from the model of interest without another layer of training (which could obfuscate the analysis).

At a high level, we view a VQA model as a learned function a=fw(i,q) that takes in an input image i and a question about the image q, is parameterized by parameters w, and produces an answer a. In order to gauge the importance of components of i and q (pixels and words), we consider the best linear approximation to f around each test point (itest,qtest):

Due to linearization above, elements of these partial derivatives tell us the effect of those pixels/words on the final prediction. These may be computed in the following two ways.

is a gradient-based visualization technique used to visualize activations of neurons in different layers in CNNs. It has been shown to perform better than its counterparts such as deconvolution

[Zeiler and Fergus2014] especially for visualizing higher order layers. Intuitively speaking, it is a modified version of backpropagation that restricts negative gradients from flowing backwards towards input layer, resulting in sharper image visualizations.

Specifically, Guided BP is identical to classical BP except in the way the backward pass is computed in Rectified Linear Units (ReLUs). Let

hl denote the input to layer l and hl+1

denote the output. Recall that a ReLU is defined as

hl+1=relu(hl)=max(hl,0). Let Gl+1=\nicefrac\delf\delhl+1 denote the partial derivative the output of the ReLU (received as input in the backward pass). The key difference between the two backprops (BP) is:

We use guided BP to compute ‘gradients’ of the probability of predicted answer inputs (image and question). Note that the language pathway in the models we typically use, does not contain ReLUs, thus these are true gradients (not just gradient-based visualizations) on the language side. We interpret the words/pixels with the highest (magnitude) gradients received as the most important for the model since small changes in these lead to largest changes in the model’s confidence in the predicted answer.

In this method, we systematically occlude subsets of the input, forward propagate the masked input through the VQA model, and compute the change in the probability of the answer predicted with the unmasked original input. Since there are 2 inputs to the model, we focus on one input at a time, keeping the other input fixed (mimicing partial derivatives). Specifically, to compute importance of a question word, we mask that word by dropping it from the question, and feed the masked question with original image as inputs to the model. The importance score of the question word is computed as the change in probability of the original predicted answer.

We follow the same procedure on the images to compute importance of image regions. We divide the image into a grid of size 16 x 16, occlude one cell at a time with a gray patch222

[Deng et al.2009] on which the CNN is trained., feed in the perturbed image with the entire question to the model, and compute the decrease in the probability of the original predicted answer. The generated importance maps are shown in fig:masked_example.

While image/question importance maps on individual inputs provide crucial insight into the inner-workings of a model (, see fig:masked_example), what do the aggregate statistics of these maps tell us about the model?

[Das et al.2016] recently collected human attention annotations for (question, image) pairs from VQA dataset [Antol et al.2015]. Given a blurry image and a question, humans were asked to deblur the regions in the image that were helpful in answering the question.

Since there is no human attention dataset for questions, we instead analyze the importance maps for questions using their POS tags. Our hypothesis is that wh-words and nouns should matter most to a ‘sensible’ model’s prediction. We plot the probability of a word being most important in a question given that it has a certain POS tag. To get reliable statistics, we picked 15 most frequent POS tags from the VQA validation dataset, and grouped similar tags into one category, WDT, WP, WRB are grouped as wh-words. The histogram can be seen in fig:ques_imp_hist. Indeed, wh-words are most important followed by adjectives and nouns. Adjectives and nouns rank high because many questions tend to ask about characteristics of objects, or objects themselves. This finding suggests that the language model part of the VQA model is strong and is able to learn to focus on appropriate words without any explicit attention procedure.

Note that for many occlusions, the model’s predicted answer is different from the original predicted answer. In fact, we found that the number of times the predicted answer changes correlates with the model’s accuracy. It is able to predict success/failure accurately 72% of the times. This suggests that features that characterize these importance maps can provide useful signals for predicting the model’s oncoming failures.

In this paper, we experimented with two visualization methods – guided backpropagation and occlusion – to interpret deep learning models for the task of Visual Question Answering. Although we focus on only one VQA model in this work, the methods are generalizable to all other end-to-end VQA models. The occlusion method can even be applied to any (non-end-to-end) VQA model considering it as a black box. We believe that these methods and results can be helpful in interpreting the current VQA models, and designing the next generation of VQA models.

Acknowledgements. This work was supported in part by the following: National Science Foundation CAREER awards to DB and DP, Army Research Office YIP awards to DB and DP, ICTAS Junior Faculty awards to DB and DP, Army Research Lab grant W911NF-15-2-0080 to DP and DB, Office of Naval Research grant N00014-14-1-0679 to DB, Paul G. Allen Family Foundation Allen Distinguished Investigator award to DP, Google Faculty Research award to DP and DB, AWS in Education Research grant to DB, and NVIDIA GPU donation to DB. The views and conclusions contained herein are those of the authors and should not be interpreted as necessarily representing the official policies or endorsements, either expressed or implied, of the U.S. Government or any sponsor.