Towards the Limit of Network Quantization 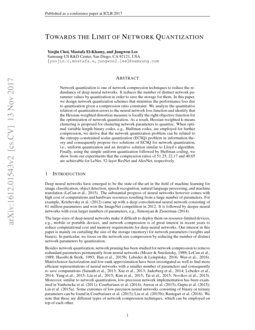 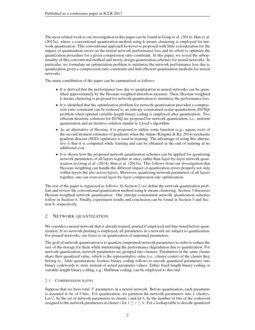 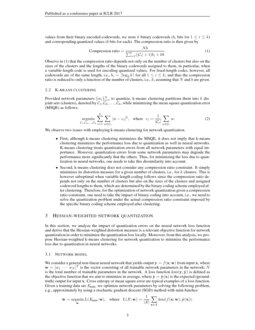 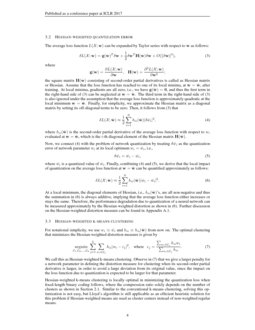 Observe in sec:quantization:compressionratio:eq:01 that the compression ratio depends not only on the number of clusters but also on the sizes of the clusters and the lengths of the binary codewords assigned to them, in particular, when a variable-length code is used for encoding quantized values. For fixed-length codes, however, all codewords are of the same length, i.e., bi=⌈log2k⌉ for all 1≤i≤k, and thus the compression ratio is reduced to only a function of the number of clusters, i.e., k, assuming that N and b are given.

is the vector consisting of all trainable network parameters in the network;

N is the total number of trainable parameters in the network. A loss function loss(y,^y) is defined as the objective function that we aim to minimize in average, where ^y=^y(x) is the expected (ground-truth) output for input x. Cross entropy or mean square error are typical examples of a loss function. Given a training data set Xtrain, we optimize network parameters by solving the following problem, e.g., approximately by using a stochastic gradient descent (SGD) method with mini-batches:

The average loss function L(X;w) can be expanded by Taylor series with respect to w as follows:

the square matrix H(w) consisting of second-order partial derivatives is called as Hessian matrix or Hessian. Assume that the loss function has reached to one of its local minima, at w=^w, after training. At local minima, gradients are all zero, i.e., we have g(^w)=0, and thus the first term in the right-hand side of sec:hessian:error:eq:01 can be neglected at w=^w. The third term in the right-hand side of sec:hessian:error:eq:01 is also ignored under the assumption that the average loss function is approximately quadratic at the local minimum w=^w. Finally, for simplicity, we approximate the Hessian matrix as a diagonal matrix by setting its off-diagonal terms to be zero. Then, it follows from sec:hessian:error:eq:01 that

where hii(^w) is the second-order partial derivative of the average loss function with respect to wi evaluated at w=^w, which is the i-th diagonal element of the Hessian matrix H(^w). Now, we connect sec:hessian:error:eq:02 with the problem of network quantization by treating δ^wi as the quantization error of network parameter wi at its local optimum wi=^wi, i.e.,

At a local minimum, the diagonal elements of Hessian, i.e., hii(^w)’s, are all non-negative and thus the summation in sec:hessian:error:eq:04 is always additive, implying that the average loss function either increases or stays the same. Therefore, the performance degradation due to quantization of a neural network can be measured approximately by the Hessian-weighted distortion as shown in sec:hessian:error:eq:04. Further discussion on the Hessian-weighted distortion measure can be found in Appendix LABEL:appendix:hessian.

For notational simplicity, we use wi≡^wi and hii≡hii(^w) from now on. The optimal clustering that minimizes the Hessian-weighted distortion measure is given by

We call this as Hessian-weighted k-means clustering. Observe in sec:hessian:kmeans:eq:01 that we give a larger penalty for a network parameter in defining the distortion measure for clustering when its second-order partial derivative is larger, in order to avoid a large deviation from its original value, since the impact on the loss function due to quantization is expected to be larger for that parameter. Hessian-weighted k-means clustering is locally optimal in minimizing the quantization loss when fixed-length binary coding follows, where the compression ratio solely depends on the number of clusters as shown in Section Document. Similar to the conventional k-means clustering, solving this optimization is not easy, but Lloyd’s algorithm is still applicable as an efficient heuristic solution for this problem if Hessian-weighted means are used as cluster centers instead of non-weighted regular means.

For obtaining Hessian, one needs to evaluate the second-order partial derivative of the average loss function with respect to each of network parameters, i.e., we need to calculate

Recall that we are interested in only the diagonal elements of Hessian. An efficient way of computing the diagonal of Hessian is presented in le1987modeles,becker1988improving and it is based on the back propagation method that is similar to the back propagation algorithm used for computing first-order partial derivatives (gradients). That is, computing the diagonal of Hessian is of the same order of complexity as computing gradients. Hessian computation and our network quantization are performed after completing network training. For the data set X used to compute Hessian in sec:hessian:computation:eq:01, we can either reuse a training data set or use some other data set, e.g., validation data set. We observed from our experiments that even using a small subset of the training or validation data set is sufficient to yield good approximation of Hessian for network quantization.

Quantization of all layers

We propose quantizing the network parameters of all layers in a neural network together at once by taking Hessian-weight into account. Layer-by-layer quantization was examined in the previous work gong2014compressing,han2015deep. However, e.g., in han2015deep, a larger number of bits (a larger number of clusters) are assigned to convolutional layers than fully-connected layers, which implies that they heuristically treat convolutional layers more importantly. This follows from the fact that the impact of quantization errors on the performance varies significantly across layers; some layers, e.g., convolutional layers, may be more important than the others. This concern is exactly what we can address by Hessian-weighting. Hessian-weighting properly handles the different impact of quantization errors not only within layers but also across layers and thus it can be employed for quantizing all layers of a network together. The impact of quantization errors may vary more substantially across layers than within layers. Thus, Hessian-weighting may show more benefit in deeper neural networks. We note that Hessian-weighting can still provide gain even for layer-by-layer quantization since it can address the different impact of the quantization errors of network parameters within each layer as well. Recent neural networks are getting deeper, e.g., see szegedy2015going,szegedy2015rethinking,he2015deep. For such deep neural networks, quantizing network parameters of all layers together is even more advantageous since we can avoid layer-by-layer compression rate optimization. Optimizing compression ratios jointly across all individual layers (to maximize the overall compression ratio for a network) requires exponential time complexity with respect to the number of layers. This is because the total number of possible combinations of compression ratios for individual layers increases exponentially as the number of layers increases.

After quantizing network parameters by clustering, lossless data compression by variable-length binary coding can be followed for compressing quantized values. There is a set of optimal codes that achieve the minimum average codeword length for a given source. Entropy is the theoretical limit of the average codeword length per symbol that we can achieve by lossless data compression, proved by Shannon (see, e.g., [Section 5.3]cover2012elements). It is known that optimal codes achieve this limit with some overhead less than 1 bit when only integer-length codewords are allowed. So optimal coding is also called as entropy coding. Huffman coding is one of entropy coding schemes commonly used when the source distribution is provided (see, e.g., [Section 5.6]cover2012elements), or can be estimated.

which follows from sec:quantization:compressionratio:eq:01. This optimization problem is too complex to solve for any arbitrary variable-length binary code since the average codeword length ¯b can be arbitrary. However, we identify that it can be simplified if optimal codes, e.g., Huffman codes, are assumed to be used. In particular, optimal coding closely achieves the lower limit of the average source code length, i.e., entropy, and then we approximately have

It is shown in gish1968asymptotically that the uniform quantizer is asymptotically optimal in minimizing the mean square quantization error for any random source with a reasonably smooth density function as the resolution becomes infinite, i.e., as the number of clusters k→∞. This asymptotic result leads us to come up with a very simple but efficient network quantization scheme as follows:

This section presents our experiment results for the proposed network quantization schemes in three exemplary convolutional neural networks: (a) LeNet lecun1998gradient for the MNIST data set, (b) ResNet he2015deep for the CIFAR-10 data set, and (c) AlexNet krizhevsky2012imagenet for the ImageNet ILSVRC-2012 data set. Our experiments can be summarized as follows:

Figure Document shows the performance of Hessian-weighted k-means clustering when Hessian is computed with a small number of samples (1,000 samples). Observe that even using the Hessian computed with a small number of samples yields almost the same performance. We also show the performance of Hessian-weighted k-means clustering when an alternative of Hessian is used instead of Hessian as explained in Section Document. In particular, the square roots of the second moment estimates of gradients are used instead of Hessian, and using this alternative provides similar performance to using Hessian. In Table Document, we summarize the compression ratios that we can achieve with different network quantization methods for pruned models. The original network parameters are 32-bit float numbers. Using the simple uniform quantization followed by Huffman coding, we achieve the compression ratios of 51.25, 22.17 and 40.65 (i.e., the compressed model sizes are 1.95%, 4.51% and 2.46% of the original model sizes) for LeNet, 32-layer ResNet and AlexNet, respectively, at no or marginal performance loss. Observe that the loss in the compressed AlexNet is mainly due to pruning. Here, we also compare our network quantization results to the ones in han2015deep. Note that layer-by-layer quantization with k-means clustering is evaluated in han2015deep while our quantization schemes including k-means clustering are employed to quantize network parameters of all layers together at once (see Section Document).