We propose a novel ranking-based semantics for Dung-style argumentation frameworks with the help of conditional logics. Using an intuitive translation for an argumentation framework to generate conditionals, we can apply nonmonotonic inference systems to generate a ranking on possible worlds. With this ranking we construct a ranking for our arguments. With a small extension to this ranking-based semantics we already satisfy some desirable properties for a ranking over arguments. 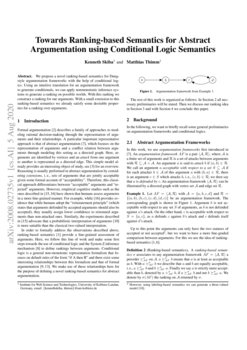 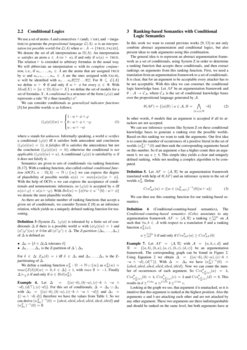 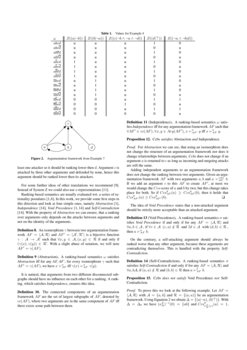 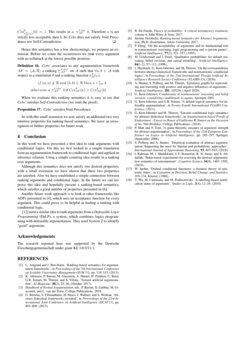 A Comparative Study of Ranking-based Semantics for Abstract Argumentation

Argumentation is a process of evaluating and comparing a set of argument...
Elise Bonzon, et al. ∙

On the Graded Acceptability of Arguments in Abstract and Instantiated Argumentation

The paper develops a formal theory of the degree of justification of arg...
Davide Grossi, et al. ∙

ConArg is a suite of tools that offers a wide series of applications for...
Stafano Bistarelli, et al. ∙

ConArg is a suite of tools that offers a wide series of applications for...
Stafano Bistarelli, et al. ∙

Formal argumentation [2] describes a family of approaches to modeling rational decision-making through the representation of arguments and their relationships. A particular important representative approach is that of abstract argumentation [7], which focuses on the representation of arguments and a conflict relation between arguments through modeling this setting as a directed graph. Here, arguments are identified by vertices and an attack from one argument to another is represented as a directed edge. This simple model already provides an interesting object of study, see [3] for an overview. Reasoning is usually performed in abstract argumentation by considering extensions, i. e., sets of arguments that are jointly acceptable given some formal account of “acceptability”. Therefore, this classical approach differentiates between “acceptable” arguments and “rejected” arguments. However, empirical cognitive studies such as the ones described in [16, 15] have shown that humans assess arguments in a more fine-grained manner. For example, while [16] provides evidence that while humans adopt the “reinstatement principle” (which states that arguments defended by accepted arguments should also be accepted), they usually assign lower confidence to reinstated arguments than non-attacked ones. Similarly, the experiments described in [15] advocate that a probabilistic interpretation of arguments [10] is more suitable than the classical two-valued interpretation.

In order to formally address the observations described above, ranking-based semantics [1] provide a fine-grained assessment of arguments. Here, we follow this line of work and make some first steps towards the use of conditional logic and the System Z inference mechanism [8] to define rankings between arguments. Conditional logic is a general non-monotonic representation formalism that focuses on default rules of the form “if A then B” and there exist some interesting relationships between this formalism and that of formal argumentation [13, 9]. We make use of these relationships here for the purpose of defining a novel ranking-based semantics for abstract argumentation.

The rest of this work is organized as follows: In Section 2 all necessary preliminaries will be stated. Then we discuss our ranking idea in Section 3 and with Section 4 we conclude this paper.

In the following, we want to briefly recall some general preliminaries on argumentation frameworks and conditional logics.

Let AF=⟨A,R⟩ with A={a,b,c,d} and R={(a,b),(b,c),(c,d),(d,c)} be an argumentation framework. The corresponding graph is shown in Figure 1. Argument b is not acceptable with respect to any set S of arguments, as b is not defended against a’s attack. On the other hand, c is acceptable with respect to S={a,c}, as a defends c against b’s attack and c defends itself against d’s attack.

Up to this point the arguments can only have the two statuses of accepted or not accepted111However, using labeling-based semantics we can generate a three-valued model [18]., but we want to have a more fine-graded comparison between arguments. For this we use the idea of ranking-based semantics [1, 6].

A ranking-based semantics σ associates to any argumentation framework AF=⟨A,R⟩ a preorder ⪰σAF on A. a⪰σAFb means that a is at least as acceptable as b. With a≃σAFb we describe that a and b are equally acceptable, i. e., a⪰σAFb and b⪰σAFa. Finally we say a is strictly more acceptable than b, denoted by a≻σAFb, if a⪰σAFb and not b⪰σAFa. We denote by σ(AF) the ranking on A returned by σ.

We use a set of atoms A and connectives ∧ (and), ∨ (or), and ¬ (negation) to generate the propositional language L(A). w is an interpretation (or possible world) for L(A) when w:A→{\textsctrue,\textscfalse}. We denote the set of all interpretations as Ω(A). An interpretation w satisfies an atom a∈A (w⊢a), if and only if w(a)=\textsctrue. The relation ⊢ is extended to arbitrary formulas in the usual way. We will abbreviate an interpretation w with its complete conjunction, i. e., if a1,…,an∈A are the atoms that are assigned true by w and an+1,…,am∈A are the ones assigned with false, w will be identified with a1…an¯¯¯¯¯¯¯¯¯¯an+1…¯¯¯¯¯¯¯am. For Φ⊆L{A} we define w⊢Φ if and only if w⊢ϕ for every ϕ∈Φ. With Mod(X)={w∈Ω(A)|w⊢X} we define the set of models for a set of formulas X. A conditional is a structure of the form (φ|ϕ) and represents a rule “If ϕ than (usually) ϕ”.

We can consider conditionals as generalized indicator functions [5] for possible worlds w as follows:

Semantics are given to sets of conditionals via ranking functions [8, 17]. With a ranking function, also called ordinal conditional function (OCF), κ:Ω(A)→N∪{∞} we can express the degree of plausibility of possible worlds κ(ϕ):=min{κ(w)|w⊢ϕ}. With the help of OCFs κ we can express the acceptance of conditionals and nonmonotonic inferences, so (φ|ϕ) is accepted by κ iff κ(ϕ∧φ)<κ(ϕ∧¬φ). With Bel(κ)={ϕ|∀w∈κ−1(0):w⊢ϕ} we denote the most plausible worlds.

As there are an infinite number of ranking functions that accept a given set of conditionals, we consider System Z [8] as an inference relation, which yields us a uniquely defined ranking function for reasoning.

In this work we want to extend previous works [9, 13] to not only combine abstract argumentation and conditional logics, but also present ideas to rank arguments using this combination.

In other words, θ models that an argument is accepted if all its attackers are not accepted.

We can use inference systems like System Z on these conditional knowledge bases to generate a ranking over the possible worlds. Based on this ranking we want to rank the arguments. Our first idea is to count the number of occurrences of a positive literal in the set of worlds (κZΔ)−1(0) and then rank the corresponding arguments based on this number. So if an argument a has a higher count then an argument b, we say a⪰b. This simple idea yields a clear and uniquely defined ranking, while not needing a complex algorithm to be computed.

Let AF=⟨A,R⟩ be an argumentation framework translated with help of θ(AF) and an inference system to the set of worlds κZΔ. Define

We can then use this counting function for our ranking-based semantics.

The Conditional-counting-based semantics (Ccbs) associates to any argumentation framework AF=⟨A,R⟩ a ranking ⪰CcbsAF on A such that ∀a,b∈A with respect to a translation θ and a ranking function κZΔ(ω).

For some further ideas of other translations we recommend [9]. Instead of System Z we could also use c-representations [11].

Ranking-based semantics are usually evaluated wrt. a series of rationality postulates [1, 6]. In this work, we provide some first steps in this direction and look at four simple ones, namely Abstraction [1], Independence [14], Void Precedence [14, 1] and Self-Contradiction [14]. With the property of Abstraction we can ensure, that a ranking over arguments only depends on the attacks between arguments and not on the identity of the arguments.

An isomorphism γ between two argumentation framework AF=⟨A,R⟩ and AF′=⟨A′,R′⟩ is a bijective function γ:A→A′ such that ∀x,y∈A,(x,y)∈R if and only if (γ(x),γ(y))∈R′. With a slight abuse of notation, we will note AF′=γ(AF).

A ranking-based semantics ω satisfies Abstraction iff for any AF, AF’, for every isomorphism γ such that AF′=γ(AF), we have x≻σAF iff γ(x)≻σAFγ(y).

It is natural, that arguments from two different disconnected subgraphs should have no influence on each other for a ranking. A ranking, which satisfies Independence, ensures this idea.

The connected components of an argumentation framework AF are the set of largest subgraphs of AF, denoted by cc(AF), where two arguments are in the same component of AF iff there exists some path between them.

For Abstraction we can see, that using an isomorphism does not change the structure of an argumentation framework nor does it change relationships between arguments. Ccbs does not change if an argument a is renamed to c as long as incoming and outgoing attacks are still the same.

On the contrary, a self-attacking argument should always be ranked worse than any other argument, because these arguments are contradicting themselves. This is handled with the property Self-Contradiction.

Ccbs does not satisfy Void Precedence nor Self-Contradiction.

To prove this we look at the following example. Let AF=⟨A,R⟩ with A={a,b} and R={(a,a)} be an argumentation framework. Using Equation 2 we obtain Δ={(a|¬a),(b|⊤)}. With Δ=Δ0 we have (κZΔ)−1(0)={ab} and CcsθκZΔ(ω)(a)=1, CcsθκZΔ(ω)(b)=1. This results in a≃CcbsAFb. Therefore a is not strictly less acceptable then b. So Ccbs does not satisfy Void Precedence nor Self-Contradiction.   ❑

Hence this semantics has a few shortcomings, we propose an extension. Before we count the occurrences we rank every argument with an selfattack at the lowest possible position.

Ccbs’ associates to any argumentation framework AF=⟨A,R⟩ a ranking ⪰Ccbs′AF on A such that ∀a,b∈A with respect to a translation θ and a ranking function κZΔ(ω).

When we evaluate this ranking semantics it is easy to see that Ccbs’ satisfies Self-Contradiction (we omit the proof).

So with this small extension we now satisfy an additional two very intuitive properties for ranking-based semantics. We leave an investigation of further properties for future work.

In this work we have presented a first idea to rank arguments with conditional logics. For this we first looked at a simple translation from an argumentation framework to conditional logic and applied an inference relation. Using a simple counting idea results in a ranking over arguments.

Although this semantics does not satisfy two desired properties, with a small extension we have shown that these two properties are satisfied. Also we have established a simple connection between ranking arguments and conditional logic. In the future we can improve this idea and hopefully present a ranking-based semantics, which satisfies a good number of properties presented in [6].

Another future work approach is to look at other frameworks like ADFs presented in [4], which uses an acceptance function for every argument. This could prove to be helpful in finding a ranking with conditional logic.

The research reported here was supported by the Deutsche Forschungsgemeinschaft under grant KE 1413/11-1.