Building models that take advantage of the hierarchical structure of language without a priori annotation is a longstanding goal in natural language processing. We introduce such a model for the task of machine translation, pairing a recurrent neural network grammar encoder with a novel attentional RNNG decoder and applying policy gradient reinforcement learning to induce unsupervised tree structures on both the source and target. When trained on character-level datasets with no explicit segmentation or parse annotation, the model learns a plausible segmentation and shallow parse, obtaining performance close to an attentional baseline. 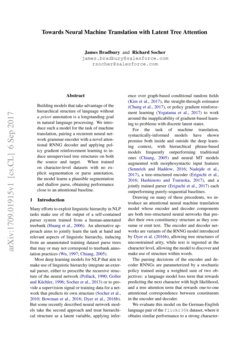 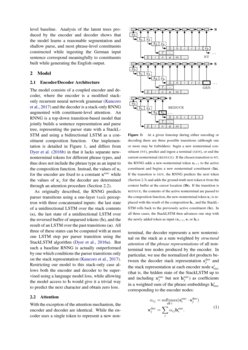 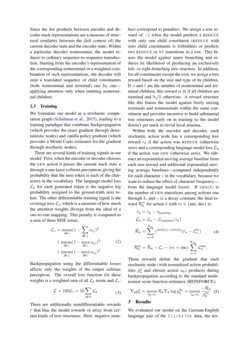 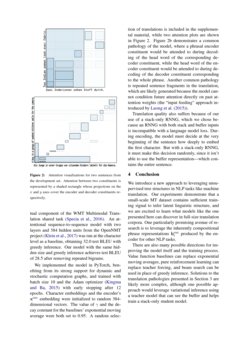 Many efforts to exploit linguistic hierarchy in NLP tasks make use of the output of a self-contained parser system trained from a human-annotated treebank (Huang et al., 2006). An alternative approach aims to jointly learn the task at hand and relevant aspects of linguistic hierarchy, inducing from an unannotated training dataset parse trees that may or may not correspond to treebank annotation practices (Wu, 1997; Chiang, 2005).

Most deep learning models for NLP that aim to make use of linguistic hierarchy integrate an external parser, either to prescribe the recursive structure of the neural network

Drawing on many of these precedents, we introduce an attentional neural machine translation model whose encoder and decoder components are both tree-structured neural networks that predict their own constituency structure as they consume or emit text. The encoder and decoder networks are variants of the RNNG model introduced by Dyer et al. (2016b), allowing tree structures of unconstrained arity, while text is ingested at the character level, allowing the model to discover and make use of structure within words.

We evaluate this model on the German-English language pair of the flickr30k dataset, where it obtains similar performance to a strong character-level baseline. Analysis of the latent trees produced by the encoder and decoder shows that the model learns a reasonable segmentation and shallow parse, and most phrase-level constituents constructed while ingesting the German input sentence correspond meaningfully to constituents built while generating the English output.

The model consists of a coupled encoder and decoder, where the encoder is a modified stack-only recurrent neural network grammar (Kuncoro et al., 2017) and the decoder is a stack-only RNNG augmented with constituent-level attention. An RNNG is a top-down transition-based model that jointly builds a sentence representation and parse tree, representing the parser state with a StackLSTM and using a bidirectional LSTM as a constituent composition function.

Our implementation is detailed in Figure 1, and differs from Dyer et al. (2016b) in that it lacks separate new-nonterminal tokens for different phrase types, and thus does not include the phrase type as an input to the composition function. Instead, the values of xi for the encoder are fixed to a constant xenc while the values of xj for the decoder are determined through an attention procedure (Section 2.2).

As originally described, the RNNG predicts parser transitions using a one-layer tanhperceptron with three concatenated inputs: the last state of a unidirectional LSTM over the stack contents (s), the last state of a unidirectional LSTM over the reversed buffer of unparsed tokens (b), and the result of an LSTM over the past transitions (a). All three of these states can be computed with at most one LSTM step per parser transition using the StackLSTM algorithm (Dyer et al., 2016a). But such a baseline RNNG is actually outperformed by one which conditions the parser transitions only on the stack representation (Kuncoro et al., 2017). Restricting our model to this stack-only case allows both the encoder and decoder to be supervised using a language model loss, while allowing the model access to b would give it a trivial way to predict the next character and obtain zero loss.

With the exception of the attention mechanism, the encoder and decoder are identical. While the encoder uses a single token to represent a new nonterminal, the decoder represents a new nonterminal on the stack as a sum weighted by structural attention of the phrase representations of all nonterminal tree nodes produced by the encoder. In particular, we use the normalized dot products between the decoder stack representation sdecj and the stack representation at each encoder node sienc (that is, the hidden state of the StackLSTM up to and including xencj but not hencj) as coefficients in a weighted sum of the phrase embeddings hienc corresponding to the encoder nodes:

Since the dot products between encoder and decoder stack representations are a measure of structural similarity between the (left context of) the current decoder state and the encoder state. Within a particular decoder nonterminal, the model reduces to ordinary sequence-to-sequence transduction. Starting from the encoder’s representation of the corresponding nonterminal or a weighted combination of such representations, the decoder will emit a translated sequence of child constituents (both nonterminal and terminal) one by one—applying attention only when emitting nonterminal children.

We formulate our model as a stochastic computation graph (Schulman et al., 2015)

There are several kinds of training signals in our model. First, when the encoder or decoder chooses the gen action it passes the current stack state s

through a one-layer softmax perceptron, giving the probability that the next token is each of the characters in the vocabulary. The language model loss

Lk for each generated token is the negative log probability assigned to the ground-truth next token. The other differentiable training signal is the coverage loss Lc, which is a measure of how much the attention weights diverge from the ideal of a one-to-one mapping. This penalty is computed as a sum of three MSE terms:

Backpropagation using the differentiable losses affects only the weights of the output softmax perceptron. The overall loss function for these weights is a weighted sum of all

There are additionally nondifferentiable rewards r that bias the model towards or away from certain kinds of tree structures. Here, negative numbers correspond to penalties. We assign a tree reward of −1 when the model predicts a reduce with only one child constituent (reduce with zero child constituents is forbidden) or predicts two reduce or nt transitions in a row. This biases the model against unary branching and reduces its likelihood of producing an exclusively left- or right-branching tree structure. In addition, for all constituents except the root, we assign a tree reward based on the size and type of its children. If n and t are the number of nonterminal and terminal children, this reward is 4t if all children are terminal and 9√n otherwise. A reward structure like this biases the model against freely mixing terminals and nonterminals within the same constituent and provides incentive to build substantial tree structures early on in training so the model doesn’t get stuck in trivial local minima.

Within both the encoder and decoder, each stochastic action node has a corresponding tree reward rk if the action was reduce (otherwise zero) and a corresponding language model loss Lk if the action was gen (otherwise zero). We subtract an exponential moving average baseline from each tree reward and additional exponential moving average baselines—computed independently for each character z in the vocabulary, because we want to reduce the effect of character frequency—from the language model losses. If \textscgen(k) is the number of gen transitions among actions one through k, and γ is a decay constant, the final reward Rmk for action k with m∈{enc,dec} is:

These rewards define the gradient that each stochastic node (with normalized action probabilities pak and chosen action ak) produces during backpropagation according to the standard multinomial score function estimator (REINFORCE):

We evaluated our model on the German-English language pair of the flickr30k data, the textual component of the WMT Multimodal Translation shared task (Specia et al., 2016). An attentional sequence-to-sequence model with two layers and 384 hidden units from the OpenNMT project (Klein et al., 2017) was run at the character level as a baseline, obtaining 32.0 test BLEU with greedy inference. Our model with the same hidden size and greedy inference achieves test BLEU of 28.5 after removing repeated bigrams.

We implemented the model in PyTorch, benefiting from its strong support for dynamic and stochastic computation graphs, and trained with batch size 10 and the Adam optimizer

with early stopping after 12 epochs. Character embeddings and the encoder’s

embedding were initialized to random 384-dimensional vectors. The value of

γ and the decay constant for the baselines’ exponential moving average were both set to 0.95.

Translation quality also suffers because of our use of a stack-only RNNG, which we chose because an RNNG with both stack and buffer inputs is incompatible with a language model loss. During encoding, the model must decide at the very beginning of the sentence how deeply to embed the first character. But with a stack-only RNNG, it must make this decision randomly, since it isn’t able to use the buffer representation—which contains the entire sentence.

We introduce a new approach to leveraging unsupervised tree structures in NLP tasks like machine translation. Our experiments demonstrate that a small-scale MT dataset contains sufficient training signal to infer latent linguistic structure, and we are excited to learn what models like the one presented here can discover in full-size translation corpora. One particularly promising avenue of research is to leverage the inherently compositional phrase representations henci produced by the encoder for other NLP tasks.

There are also many possible directions for improving the model itself and the training process. Value function baselines can replace exponential moving averages, pure reinforcement learning can replace teacher forcing, and beam search can be used in place of greedy inference. Solutions to the translation pathologies presented in Section 3 are likely more complex, although one possible approach would leverage variational inference using a teacher model that can see the buffer and helps train a stack-only student model.