Convolutional neural networks have become state-of-the-art in a wide range of image recognition tasks. The interpretation of their predictions, however, is an active area of research. Whereas various interpretation methods have been suggested for image classification, the interpretation of image segmentation still remains largely unexplored. To that end, we propose SEG-GRAD-CAM, a gradient-based method for interpreting semantic segmentation. Our method is an extension of the widely-used Grad-CAM method, applied locally to produce heatmaps showing the relevance of individual pixels for semantic segmentation. 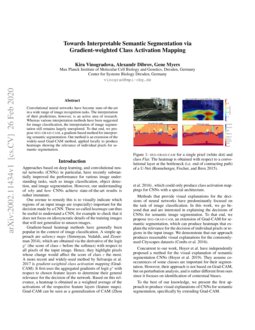 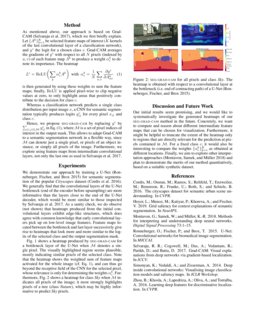 In this paper, we will show an unprecedented method to accelerate traini...
Jiakai Wei, et al. ∙

Approaches based on deep learning, and convolutional neural networks (CNNs) in particular, have recently substantially improved the performance for various image understanding tasks, such as image classification, object detection, and image segmentation. However, our understanding of

why and how CNNs achieve state-of-the-art results is rather immature.

One avenue to remedy this is to visually indicate which regions of an input image are (especially) important for the decision made by a CNN. These so-called heatmaps can thus be useful to understand a CNN, for example to check that it does not focus on idiosyncratic details of the training images that will not generalize to unseen images.

Gradient-based heatmap methods have generally been popular in the context of image classification. A simple approach are saliency maps [Simonyan, Vedaldi, and Zisserman2014]

, which are obtained via the derivative of the logit

yc (the score of class c before the softmax) with respect to all pixels of the input image. Hence, they highlight pixels whose change would affect the score of class c the most. A more recent and widely-used method by selvaraju2017grad selvaraju2017grad is gradient-weighted class activation mapping (Grad-CAM). It first uses the aggregated gradients of logit yc with respect to chosen feature layers to determine their general relevance for the decision of the network. Based on this relevance, a heatmap is obtained as a weighted average of the activations of the respective feature layers (feature maps). Grad-CAM can be seen as a generalization of CAM [Zhou et al.2016] , which could only produce class activation mappings for CNNs with a special architecture.

Methods that provide visual explanations for the decisions of neural networks have predominantly focused on the task of image classification. In this work, we go beyond that and are interested in explaining the decisions of CNNs for semantic image segmentation. To that end, we propose seg-grad-cam, an extension of Grad-CAM for semantic segmentation, which can produce heatmaps that explain the relevance for the decision of individual pixels or regions in the input image. We demonstrate that our approach produces reasonable visual explanations for the commonly-used Cityscapes datasets [Cordts et al.2016].

Concurrent to our work, hoyer2019grid have independently proposed a method for the visual explanation of semantic segmentation CNNs [Hoyer et al.2019]. They assume co-occurences of some classes are important for their segmentation. However, their approach is not based on Grad-CAM, but on perturbation analysis, and is rather different from ours since it focuses on identification of contextual biases.

To the best of our knowledge, we present the first approach to produce visual explanations of CNNs for semantic segmentation, specifically by extending Grad-CAM.

As mentioned above, our approach is based on Grad-CAM [Selvaraju et al.2017], which we first briefly explain. Let {Ak}Kk=1 be selected feature maps of interest (K kernels of the last convolutional layer of a classification network), and yc the logit for a chosen class c. Grad-CAM averages the gradients of yc with respect to all N pixels (indexed by u,v) of each feature map Ak to produce a weight αkc to denote its importance. The heatmap

is then generated by using these weights to sum the feature maps; finally, ReLU is applied pixel-wise to clip negative values at zero, to only highlight areas that positively contribute to the decision for class c.

Whereas a classification network predicts a single class distribution per input image x, a CNN for semantic segmentation typically produces logits ycij for every pixel xij and class c.

Hence, we propose seg-grad-cam by replacing yc by ∑(i,j)∈Mycij in Eq. 1, where M is a set of pixel indices of interest in the output mask. This allows to adapt Grad-CAM to a semantic segmentation network in a flexible way, since M can denote just a single pixel, or pixels of an object instance, or simply all pixels of the image. Furthermore, we explore using feature maps from intermediate convolutional layers, not only the last one as used in selvaraju2017grad selvaraju2017grad.

We demonstrate our approach by training a U-Net [Ronneberger, Fischer, and Brox2015] for semantic segmentation of the popular Cityscapes dataset [Cordts et al.2016]. We generally find that the convolutional layers of the U-Net bottleneck (end of the encoder before upsampling) are more informative than the layers close to the end of the U-Net decoder, which would be more similar to those inspected by selvaraju2017grad selvaraju2017grad. As a sanity check, we do observe (not shown) that heatmaps produced from the initial convolutional layers exhibit edge-like structures, which does agree with common knowledge that early convolutional layers pick up on low-level image features. Feature maps located between the bottleneck and last layer successively give rise to heatmaps that look more and more similar to the logits of the selected class and the output segmentation mask.

Fig. 1 shows a heatmap produced by seg-grad-cam for a bottleneck layer of the U-Net when M denotes a single pixel. The visually highlighted region seems plausible, mostly indicating similar pixels of the selected class. Note that the heatmap shows the weighted sum of feature maps activated for the whole image (cf. Eq. 1), and can thus go beyond the receptive field of the CNN for the selected pixel, whose relevance is only for determining the weights αkc. Furthermore, Fig. 2 shows a heatmap for class Sky when M indicates all pixels of the image; it most strongly highlights pixels of a tree (class Nature), which may be highly informative to predict Sky pixels.

Our initial results seem promising, and we would like to systematically investigate the generated heatmaps of our seg-grad-cam method in the future. Concretely, we want to compare and reason about different intermediate feature maps that can be chosen for visualization. Furthermore, it might be helpful to truncate the extent of the heatmap only to regions that are directly relevant for the prediction at pixels contained in M. For a fixed class c, it would also be interesting to compare the weights {αkc}Kk=1 as obtained at different locations. Finally, we aim to explore other interpretation approaches [Montavon, Samek, and Müller2018] and plan to demonstrate the merits of our method quantitatively, based on a suitable synthetic dataset.