Nuclear magnetic resonance (NMR) spectroscopy is one of the leading techniques for protein studies. The method features a number of properties, allowing to explain macromolecular interactions mechanistically and resolve structures with atomic resolution. However, due to laborious data analysis, a full potential of NMR spectroscopy remains unexploited. Here we present an approach aiming at automation of two major bottlenecks in the analysis pipeline, namely, peak picking and chemical shift assignment. Our approach combines deep learning, non-parametric models and combinatorial optimization, and is able to detect signals of interest in a multidimensional NMR data with high accuracy and match them with atoms in medium-length protein sequences, which is a preliminary step to solve protein spatial structure. 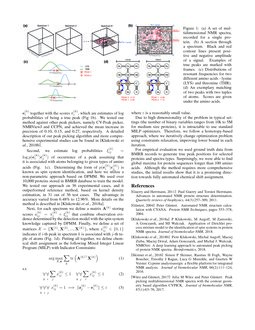 Binary classification of proteins by a Machine Learning approach

In this work we present a system based on a Deep Learning approach, by u...
Damiano Perri, et al. ∙

According to Protein Data Bank (PDB), NMR spectroscopy has been used to solve over 12 000 structures of macromolecules. This process usually requires recording about 10-20 volumetric images (3D, 4D), which we refer to as NMR spectra (see Fig. 1a). Each of them encodes a partial information about a protein structure. For now, no robust approach for fully automated analysis of NMR data has been proposed, and some crucial steps in the pipeline are being performed manually, which constitutes a bottleneck in the experimental workflow, and takes weeks to months, depending on complexity of investigated protein. An automation of this process could significantly accelerate research in multiple domains, including structure solving, protein-ligand interactions and structure-based drug discovery.

Peak picking consists in selecting signals (true peaks) in a NMR spectrum that come from protein atoms (see Fig. 1b). Usually, true peaks are characterized by specific regularities in shape, and can be visually distinguished from noise and other artifacts (signals arising due to imperfection of measurement system). The number of true peaks in a single spectrum varies from hundreds to thousands, depending on experiment type and protein complexity.

Each true peak is a result of an interaction among a triplet or a quadruplet (depending on the dimensionality of a spectrum) of atoms during the NMR examination. Peak coordinates correspond to resonant frequencies of atoms in the tuple. Chemical shift assignment is a process of assigning atom identifiers to peaks, using intricate combination of various constraints and domain knowledge.

Finally, having paired atom identifiers with their chemical shifts, we can use them as input to a method for protein structure calculation e.g. CYANA [Güntert2004].

The scientific community has been struggling for 30 years to develop robust methods to support NMR data analysis. So far multiple approaches have been proposed for peak picking, including [Skinner et al.2016, Würz and Güntert2017]. One of the recent surveys lists 44 methods performing chemical shift assignment [Guerry and Herrmann2011].

Here, we present our ongoing research towards developing fully automated tool for chemical shift assignment, starting from a set of raw spectra at the input. We combine various machine learning techniques, including Convolutional Neural Networks (CNN) and Dirichlet Process Mixture Models (DPMM), with combinatorial optimization methods. So far, we have achieved state-of-the-art results on two intermediate steps of the analysis - peak picking

Having a set of different spectra S1,…,SK (Fig. 1a) measured for one protein, which contain information about resonant frequencies encoded in peaks, the goal of chemical shift assignment is to determine a value of resonant frequency zn for each atom n=1,…,N in a protein sequence. Initially, for each spectrum Sk we define tuples z(k)j of chemical shifts that encodes coordinates where theoretically should appear a true peak, and for each tuple we determine the types of amino acids c(k)j that the tuple is associated with. We can do so since the types of the spectra as well as protein sequence are known. However, notice that a particular chemical shift zn can appear in many tuples associated with the same or different spectra.

In our approach, we first utilize deep learning-based detection model that for each spectrum Sk returns a list of peaks e(k)i together with the scores π(k)i

, which are estimates of log probabilities of being a true peak (Fig 1b). We tested our method against other peak pickers, namely CV-Peak picker, NMRViewJ and CCPN, and achieved the mean increase in precision of 0.10, 0.15, and 0.27, respectively. A detailed description of our peak picking algorithm and more comprehensive experimental studies can be found in

Second, we estimate log probabilities ξ(k)ij=logp(e(k)i|c(k)j) of occurrence of a peak assuming that it is associated with atoms belonging to given types of amino acids (Fig. 1c). Determining the form of p(e(k)i|c(k)j)

is known as spin system identification, and here we utilize a non-parametric approach based on DPMM. We used over 10,000 proteins stored in BMRB database to train the model. We tested our approach on 36 experimental cases, and it outperformed reference method, based on kernel density estimation, in 31 out of 36 test cases. The advantage in accuracy varied from 6.48% to 12.96%. More details on the method is described in

Next, for each spectrum we define a matrix A(k) storing scores a(k)ij=π(k)i+ξ(k)ij that combine observation evidence determined by the detection model with the spin system knowledge captured by DPMM. Finally, we define a set of matrices X={X(1),X(2),...,X(K)}, where x(k)ij∈{0,1} indicates if i-th peak in spectrum k is associated with j

where ε is a reasonably small value.

Due to high dimensionality of the problem in typical settings (the number of binary variables ranges from 10k to 5M for medium size proteins), it is intractable to use standard MILP optimizers. Therefore, we follow a homotopy-based approach, where we iteratively change optimization problem using constraints relaxation, improving lower bound in each iteration.

For empirical evaluation we used ground truth data from BMRB records to generate true peak positions for selected proteins and spectra types. Surprisingly, we were able to find global maxima for protein sequences longer than 100 amino acids. Although the method requires more comprehensive studies, the initial results show that it is a promising direction towards fully automated chemical shift assignment.