Towards Distributed Logic Programming based on Computability Logic 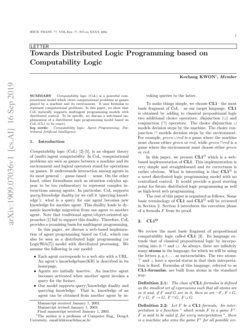 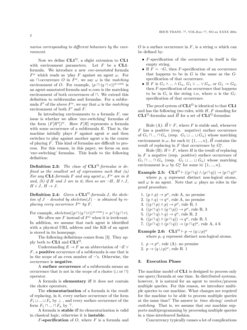 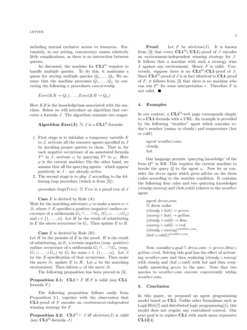 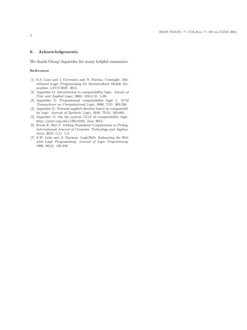 Computability logic (CoL) [2]-[5], is an elegant theory of (multi-)agent computability. In CoL, computational problems are seen as games between a machine and its environment and logical operators stand for operations on games. It understands interaction among agents in its most general — game-based — sense. On the other hand, other formalisms such as situation calculus appear to be too rudimentary to represent complex interactions among agents. In particular, CoL supports query/knowledge duality (or we call it ‘querying knowledge’): what is a query for one agent becomes new knowledge for another agent. This duality leads to dynamic knowledge migration from one agent to another agent. Note that traditional agent/object-oriented approaches [1] fail to support this duality. Therefore, CoL provides a promising basis for multiagent programming.

In this paper, we discuss a web-based implemention of agent programming based on CoL, which can also be seen as a distributed logic programming (or LogicWeb[7]) model with distributed processing. We assume the following in our model:

To make things simple, we choose CL1– the most basic fragment of CoL – as our target language. CL1 is obtained by adding to classical propositional logic two additional choice operators: disjunction (⊔) and conjunction (⊓) operators. The choice disjunction ⊔ models decision steps by the machine. The choice conjunction ⊓ models decision steps by the environment. For example, green⊔red is a game where the machine must choose either green or red, while green⊓red is a game where the environment must choose either green or red.

The rest of this paper is organized as follows. Some basic terminology of CL1 and CL1Ω will be reviewed in Section 2. Section 3 introduces the execution phase of a formula F from its proof.

We review the most basic fragment of propositional computability logic called CL1 [3]. Its language extends that of classical propositional logic by incorporating into it ⊓ and ⊔. As always, there are infinitely many atoms in the language, for which we will be using the letters p,q,r,… as metavariables. The two atoms: ⊤ and ⊥ have a special status in that their interpretation is fixed. Formulas of this language, referred to as CL1-formulas, are built from atoms in the standard way:

The class of CL1-formulas is defined as the smallest set of expressions such that all atoms are in it and, if F and G are in it, then so are ¬F, F∧G, F∨G, F→G, F⊓G, F⊔G.

Let F be a CL1-formula. An interpretation is a function ∗ which sends F to a game F∗. F is said to be valid if, for every interpretation ∗, there is a machine who wins the game F∗ for all possible scenarios corresponding to different behaviors by the environment.

In introducing environments to a formula F, one issue is whether we allow ‘env-switching’ formulas of the form (F[Ru])w. Here F[R] represents a formula with some occurrence of a subformula R. That is, the machine initially plays F against agent w and then switches to play against another agent u in the course of playing F. This kind of formulas are difficult to process. For this reason, in this paper, we focus on non ‘env-switching’ formulas. This leads to the following definition:

The class of CL1Ω-formulas is defined as the smallest set of expressions such that (a) For any CL1-formula F and any agent ω, Fω are in it and, (b) if H and J are in it, then so are ¬H, H∧J, H∨J, H→J.

Given a CL1Ω-formula J, the skeleton of J – denoted by skeleton(J) – is obtained by replacing every occurrence Fω by F.

We often use F instead of Fω when it is irrelevant. In addition, we assume that each agent is identified with a physical URL address and the KB of an agent is stored in its homepage.

The following definitions comes from [3]. They apply both to CL1 and CL1Ω.

Understanding E→F as an abbreviation of ¬E∨F, a positive occurrence of a subformula is one that is in the scope of an even number of ¬’s. Otherwise, the occurrence is negative.

A surface occurrence of a subformula means an occurrence that is not in the scope of a choice (⊔ or ⊓) operator.

A formula is elementary iff it does not contain the choice operators.

A formula is stable iff its elementarization is valid in classical logic, otherwise it is instable.

F-specification of O, where F is a formula and O is a surface occurrence in F, is a string α which can be defined by:

The proof system of CL1Ω is identical to that CL1 and has the following two rules, with H, F standing for CL1Ω-formulas and →H for a set of CL1Ω-formulas:

Rule (A): →H⊢F, where F is stable and, whenever F has a positive (resp. negative) surface occurrence of G1⊓...⊓Gn (resp. G1⊔...⊔Gn) whose matching environment is ω, for each i∈{1,...,n}, →H contains the result of replacing in F that occurrence by Gωi.

where p, q represent distinct non-logical atoms, and ω is an agent. Note that ω plays no roles in the proof procedure.

Concurrency typically causes a lot of complications including mutual exclusive access to resources. Fortunately, in our setting, concurrency causes relatively little complications, as there is no interaction between queries.

Here KB is the knowledgebase associated with the machine. Below we will introduce an algorithm that executes a formula J. The algorithm contains two stages:

procedure loop(Tree): % Tree is a proof tree of J

Case E is derived by Rule (A):           Wait for the matching adversary ω to make a move α=βi, where β  E-specifies a positive (negative) surface occurrence of a subformula G1⊓…⊓Gn (G1⊔…⊔Gn) and i∈{1,…,n}. Let H be the result of substituting in E the above occurrence by Gi. Then update E to H.

Case E is derived by Rule (B):           Let H be the premise of E in the proof. H is the result of substituting, in E, a certain negative (resp. positive) surface occurrence of a subformula G1⊓…⊓Gn (resp. G1⊔…⊔Gn) by Gi for some i∈{1,…,n}. Let β be the E-specification of that occurrence. Then make the move βi, update E to H. Let ω be the matching environment. Then inform ω of the move βi.

The following proposition has been proved in [3].

The following proposition follows easily from Proposition 3.1, together with the observation that CL1-proof of F encodes an environment-independent winning strategy for F.

Proof. Let F be skeleton(J). It is known from [3] that every CL1Ω(/CL1)-proof of J encodes an environment-independent winning strategy for J. It follows that a machine with such a strategy wins J against any environment. Hence F is valid. Conversely, suppose there is no CL1Ω/CL1-proof of J. Since CL1Ω-proof of J is in fact identical to CL1-proof of F, it follows from [3] that there is no machine who can win F∗ for some interpretation ∗. Therefore F is not valid.

In our context, a CL1Ω-web page corresponds simply to a CL1-formula with a URL. An example is provided by the following “weather” agent which contains today’s weather (sunny or cloudy) and temperature (hot or cold).

Our language permits ‘querying knowledge’ of the form Qω in KB. This requires the current machine to invoke the query Q to the agent ω. Now let us consider the dress agent which gives advice on the dress codes according to the weather condition. It contains the following four rules and two querying knowledges (cloudy⊔sunny) and (hot⊔cold) relative to the weather agent.

Now, consider a goal ?- dress.com→green⊔blue⊔yellow⊔red. Solving this goal has the effect of activating weather.com and then replacing (cloudy⊔sunny) with cloudy and (hot⊔cold) with hot and then eventually answering green to the user. Note that two queries to weather.com execute concurrently within weather.com.

In this paper, we proposed an agent programming model based on CL1. Unlike other formalisms such as LogicWeb[7] and distributed logic programming[1], this model does not require any centralized control. Our next goal is to replace CL1 with much more expressive CL12[4].

We thank Giorgi Japaridze for many helpful comments.