Towards Cereceda's conjecture for planar graphs

The reconfiguration graph R_k(G) of the k-colourings of a graph G has as vertex set the set of all possible k-colourings of G and two colourings are adjacent if they differ on the colour of exactly one vertex. Cereceda conjectured ten years ago that, for every k-degenerate graph G on n vertices, R_k+2(G) has diameter O(n^2). The conjecture is wide open, with a best known bound of O(k^n), even for planar graphs. We improve this bound for planar graphs to 2^O(√(n)). Our proof can be transformed into an algorithm that runs in 2^O(√(n)) time. 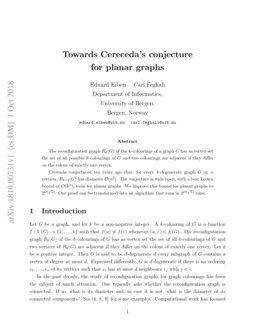 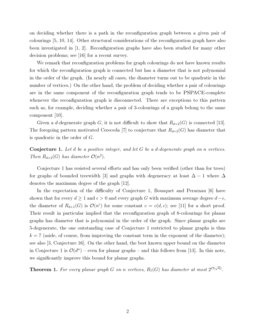 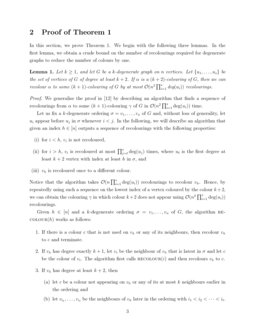 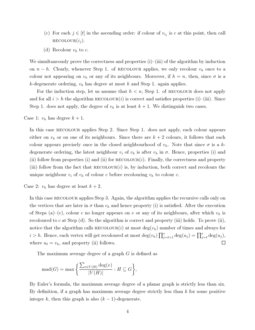 Let G be a graph, and let k be a non-negative integer. A k-colouring of G is a function f:V(G)→{1,…,k} such that f(u)≠f(v) whenever (u,v)∈E(G). The reconfiguration graph Rk(G) of the k-colourings of G has as vertex set the set of all k-colourings of G and two vertices of Rk(G) are adjacent if they differ on the colour of exactly one vertex. Let d be a positive integer. Then G is said to be d-degenerate if every subgraph of G contains a vertex of degree at most d. Expressed differently, G is d-degenerate if there is an ordering v1,…,vn of its vertices such that vi has at most d neighbours vj with j<i.

Given a d-degenerate graph G, it is not difficult to show that Rd+2(G) is connected [13]. The foregoing pattern motivated Cereceda [7] to conjecture that Rd+2(G) has diameter that is quadratic in the order of G.

Let d be a positive integer, and let G be a d-degenerate graph on n vertices. Then Rd+2(G) has diameter O(n2).

Conjecture 1 has resisted several efforts and has only been verified (other than for trees) for graphs of bounded treewidth [3] and graphs with degeneracy at least Δ−1 where Δ denotes the maximum degree of the graph [12].

For every planar graph G on n vertices, R7(G) has diameter at most 2O(√n).

In this section, we prove Theorem 1. We begin with the following three lemmas. In the first lemma, we obtain a crude bound on the number of recolourings required for degenerate graphs to reduce the number of colours by one.

We generalise the proof in [12] by describing an algorithm that finds a sequence of recolourings from α to some (k+1)-colouring γ of G in O(n2∏si=1deg(ui)) time.

Let us fix a k-degenerate ordering σ=v1,…,vn of G and, without loss of generality, let ui appear before uj in σ whenever i<j. In the following, we will describe an algorithm that given an index h∈[n] outputs a sequence of recolourings with the following properties:

We simultaneously prove the correctness and properties (i)–(iii) of the algorithm by induction on n−h. Clearly, whenever Step 1. of recolour applies, we only recolour vh once to a colour not appearing on vh or any of its neighbours. Moreover, if h=n, then, since σ is a k-degenerate ordering, vh has degree at most k and Step 1. again applies.

For the induction step, let us assume that h<n, Step 1. of recolour does not apply and for all i>h the algorithm recolour(i) is correct and satisfies properties (i)–(iii). Since Step 1. does not apply, the degree of vh is at least k+1. We distinguish two cases.

In this case recolour applies Step 2. Since Step 1. does not apply, each colour appears either on vh or on one of its neighbours. Since there are k+2 colours, it follows that each colour appears precisely once in the closed neighbourhood of vh. Note that since σ is a k-degenerate ordering, the latest neighbour vi of vh is after vh in σ. Hence, properties (i) and (ii) follow from properties (i) and (ii) for recolour(i). Finally, the correctness and property (iii) follow from the fact that recolour(i) is, by induction, both correct and recolours the unique neighbour vi of vh of colour c before recolouring vh to colour c.

In this case recolour applies Step 3. Again, the algorithm applies the recursive calls only on the vertices that are later in σ than vh and hence property (i) is satisfied. After the execution of Steps (a)–(c), colour c no longer appears on v or any of its neighbours, after which vh is recoloured to c at Step (d). So the algorithm is correct and property (iii) holds. To prove (ii), notice that the algorithm calls recolour(i) at most deg(vh) number of times and always for i>h. Hence, each vertex will get recoloured at most deg(vh)∏sj=ℓ+1deg(uj)=∏sj=ℓdeg(uj), where uℓ=vh, and property (ii) follows. ∎

The maximum average degree of a graph G is defined as

In our next lemma, we show that we can reduce the number of colours by one using subexponentially many recolourings if we further assume our graph to have bounded maximum average degree.

We shall prove by induction on the size of n=|V(G)| that we can recolour α to a (k+1)-colouring of G such that each vertex in G is recoloured at most kO(k2√n) times, which implies the lemma. We note that our inductive proof can be easily transformed to a recursive algorithm running in time kO(k2√n).

Since H is connected,

By the AM-GM inequality of arithmetic and geometric means, it holds that

Combining Inequalities (3) and (4) we get

or, since both sides of the inequality are positive, equivalently

finishing the proof of the claim. ∎

In our next lemma, we adapt the proof method introduced in [11] to show that we can further reduce the number of colours by one for planar graphs.

Let G be a planar graph, and let γ be a 6-colouring of G. Then we can recolour γ to some 5-colouring of G using seven colours by at most O(nc) recolourings for some constant c>1.

Let H be any subgraph of G, and let h=|V(H)|. An independent set I of H is said to be special if it contains at least h/49 vertices and every vertex of I has at most 6 neighbours in G−I. Let S be the set of vertices of H of degree at most 6. Then S has at least h/7 vertices since otherwise

which contradicts that mad(G)<6. Let I⊆S be a maximal independent subset of S. Each vertex of I has at most 6 neighbours in S and every vertex of S−I has at least one neighbour in I. Therefore, |I|+6|I|≥|S| and so I is a special independent set as needed.

Let us prove by induction on the order of G that there is a sequence of recolourings from a 6-colouring γ of G to some 5-colouring of G. We will then argue that at most O(nc) recolourings have been performed for some constant c>1, thereby finishing the proof.

Let I be a special independent set of G, and let G∗ be the graph obtained from G by

Notice that G∗ is planar (one can think of some embedding of G in the plane and then note that the neighbours of any vertex v form part of the boundary of a face F in G−v; thus, indentifying a pair of neighbours of v inside the interior of F in the graph G−v does not break the planarity).

Let γ′ denote the colouring of G∗ that agrees with γ on V(G∗)∩V(G) and such that, for each z∈V(G∗)∖V(G), if z is the vertex obtained by the identification of some vertices x and y of G, then γ′(z)=γ(x)(=γ(y)). Graph G∗ has less vertices than G, so can we apply our induction hypothesis to find a sequence of recolourings from γ′ to some 5-colouring γ′′ of G∗.

Suppose that there is a vertex v of I with colour 6. We emulate the proof of the 5-Colour Theorem to show that we can recolour v to a colour from {1,…,5} without introducing new vertices of colour 6 or 7. By repeating the same procedure at most |I| times, we can transform γ into a 5-colouring of G, as needed. For this, we require some definitions.

If for a vertex v at least one colour in {1,…,5} does not appear on its neighbour, we can immediately recolour v. So we can assume that v has either degree 5 or 6 with precisely five neighbours v1,…,v5 coloured distinctly. Suppose these neighbours appear in this order in a plane embedding of G. Let us denote by i the colour of vi (i=1,…,5). If the (1,3)-component C1,3 that contains v1 does not contain v3, we swap colours 1, 3 on C1,3 (this is possible since colour 7 is not used on G), which in turn allows us to recolour v to 1. So we can assume that C1,3 contains both v1 and v3. In the same vein, the vertices v2 and v4 must be contained in the same (2,4)-component C2,4. By the Jordan Curve Theorem, this is impossible. Hence, either C1,3 does not contain both v1 and v3 or C2,4 does not contain both v2 and v4 and we are able to recolour v, as required.

Let us now estimate the number of recolourings of a vertex

and the theorem follows by the master theorem. ∎

We also require some auxiliary results whose algorithmic versions (running in polynomial time) is implicit in the respective papers.

Let d and k be positive integers, k≥2d+1, and let G be a d-degenerate graph on n vertices. Then Rk(G) has diameter O(n2).

Let G=(V,E) be a planar graph. There is a partition V=I∪D such that G[I] is an independent set and G[D] is a 3-degenerate graph.

We combine Lemmas 5 and 6 to obtain the following corollary.

Let G=(V,E) be a planar graph. Then there is a partition V=I1∪I2∪A such that G[I1] and G[I2] are independent sets and G[A] is a 2-degenerate graph.

We are now ready to prove Theorem 1.

Let α and β be two 7-colourings of G. To prove the theorem, it suffices to show that we can recolour α to β by 2O(√n) recolourings. Combining Lemmas 2 and 3, we can recolour α to some 5-colouring γ1 of G and β to some 5-colourings γ2 by 2O(√n) recolourings. We apply Corollary 2.1 to find a partition V=I1∪I2∪A such that G[I1] and G[I2] are independent sets and H=G[A] is a 2-degenerate graph. From γ1 and γ2 we recolour the vertices in I1 to colour 7 and those in I2 to colour 6 (the colours that are not used in either γ1 or γ2). Let γH1 and γH2 denote, respectively, the restrictions of γ1 and γ2 to H. We focus on H and as long as we do not use colours 6 and 7 we can recolour γH1 to γH2 without worrying about adjacencies between A and I1∪I2. Since H is 2-degenerate, we can apply Lemma 4 with k=5 and d=2 to find by O(n2) recolourings a recolouring sequence from γH1 to γH2. This completes the proof of the theorem. ∎

The reader may have observed from the proof of Theorem 1 that, in order to settle [3, Conjecture 16], it would suffice to show that we can recolour any 7-colouring of a planar graph to some 6-colouring by polynomially many recolourings.

Given a planar graph G and a 7-colouring α of G, can we recolour α to some 6-colouring of G by O(nc) recolourings for some constant c>0?

In order to obtain a sub-exponential bound on the diameter of reconfiguration graphs of colourings for graphs with any bounded maximum average degree, it would suffice to find a positive answer to the following problem. (The proof of this fact follows by combining Lemma 2 with an affirmative answer to Problem 2 in the same way that Lemmas 8, 9 and 10 in [12] are combined to obtain Theorem 6 in [12].)