In this paper, we present a mathematical and numerical model for blood solidification and its rupture in stenosed arteries. The interaction between the blood flow and an existing stenosis in the arterial wall is modeled as a three dimensional fluid-structure interaction problem. The blood is assumed to be a non-Newtonian incompressible fluid with a time-dependent viscosity that obeys a modified Carreau's model and the flow dynamics is described by the Navier-Stokes equations. Whereas, the arterial wall is considered a hyperelastic material whose displacement satisfies the quasi-static equilibrium equations. Numerical simulations are performed using FreeFem++ on a two dimensional domain. We investigate the behavior of the viscosity of blood, its speed and the maximum shear stress. From the numerical results, blood recirculation zones have been identified. Moreover, a zone of the blood of high viscosity and low speed has been observed directly after the stenosis in the flow direction. This zone may correspond to a blood accumulation and then solidification zone that is subjected to shear stress by the blood flow and to forces exerted by the artery wall deformation. Therefore, this zone is thought to break and then to release a blood clot that leads to the occlusion of small arterioles. 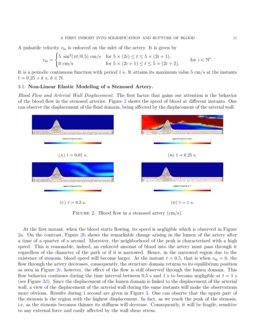 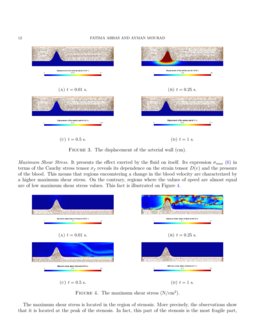 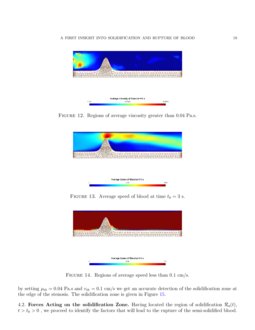 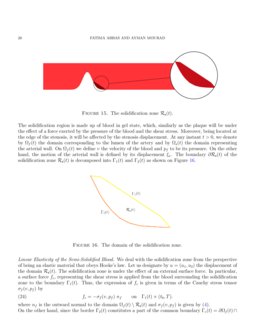 Non-Newtonian and poroelastic effects in simulations of arterial flows

In this paper, we focus on investigating the influence on hydrodynamic f...
Tongtong Li, et al. ∙

A weakness in the wall of a cerebral artery causing a dilation or balloo...
Sahar Soheilian Esfahani, et al. ∙

Cardiovascular diseases, mainly due to atherosclerosis, are causes with the highest percentage leading to death worldwide. Curiosity of finding cures for these diseases has enthused mathematicians to study them from their mathematical viewpoint. Consequently, many computational techniques and models have been developed. These tools aim at describing the blood flow and are effictive in studying the response of the arterial wall under certain conditions, the characteristics of the blood components in addition to those of the heart [3, 16, 17, 21, 22, 24]. Indeed, mathematical models with numerical analysis and simulations play an important role in providing knowledge and insights that are unnoticeable clinically. The rheological behavior of blood is captured by deriving constitutive models that constitute a constructive tool in the diagnosis of the pathologies, investigating appropriate remedies and proposing preventive therapies [1, 14]. Recently, the lumen-wall modeling has been adopted using fluid-structure interaction (FSI) model. In the FSI, the behavior of the blood and the arterial wall are taken into consideration, so that one is capable of representing them by their appropriate dynamics and models. A most commonly used method when dealing with FSI systems is the Arbitrary Lagrangian-Eulerain (ALE) method [8] that is effective when combining the fluid formulation in the Eulerian description and the structure formulation in the Lagrangian description. An overview of FSI in biomedical applications has been considered in the book [2]. In particular, modeling of cardiovascular diseases has been highlighted in [9, 18, 25]. In lumen-wall modeling some difficulties encounter due to the complexity of the arterial wall formed of several layers, each with its own unique mechanics and thickness. Assuming that the arterial wall is negligibly thin, or the ratio of the arterial wall thickness to the aretry raduis is small, reduced shell or membrane models have been employed [4, 13]. Introduction of computational model with FSI in order to investigate the wall shear stresses, blood flow field and recirculation zones in stenosed arteries have been studied in [3] where the blood is considered to be an incompressible Newtonian fluid, whereas in the case of a compressible non-Newtonian fluid these factors have been analyzed in [6].

Currently, numerous computational models are simple when describing the cardiovascular diseases and the related processes such as inflammations, coagulation, plaque growth, clot formation, etc.. Indeed, they are managed to capture only some essential features of the processes that take place in the cardiovascular system. Further, these models neglect some of the blood components with their characteristics as well as the arterial wall layers and their own mechanics. Consequently, more suitable models are needed through which the physiological parameters associated to the blood, atherosclerosis and clots must be investigated clinically. In addition, the arterial wall must be considered as a multi-component structure taking into account the effects of the plaque growth and the clot formation on their mechanism. Further, timescales of the biological phenomena, the pulse duration and the time of the plaque growth must be analyzed.

In the present work, the interaction between the blood modeled by a modified Carreau’s model and the hyperelastic incompressible arterial wall has been considered. In a first step, we introduce the FSI system which is composed of the incompressible Navier-Stokes equations representing the blood flow dynamics and the quasi-static equilibrium equations describing the elastic large deformation of the arterial wall. In addition, coupling conditions that ensure a global energy balance of the FSI system have been imposed on the common interface. Variational formulation has been presented and its discrete formulation has been derived. In fact, the Navier-Stokes equations have been semi-discretized in time, while, the nonlinear material equilibrium equations have been solved using the Newton-Raphson method. Numerical simulations have been performed using FreeFem++ [12]. A deep analysis has been made for better understanding of the behavior of the blood flow, the blood viscosity, the maximum shear stress and the recirculation zones. Based on the numerical results, a location where the blood is thought to accumulate and solidify has been identified. Finally, the factors affecting this zone have been investigated, in particular, this zone is subjected to forces exerted by the artery wall and the blood flow. Consequently, numerical simulations for the deformation of this zone have been performed in order to understand its rupture and thus the release of a clot that will lead to the occlusion of small arterioles.

which is a second order tensor is given by

On the other hand, we describe the blood flow dynamics by the incompressible Navier-Stokes equations on the sub-domain Ωf(t). We denote by

the velocity of the blood and its pressure, respectively. Further, the blood is assumed to be an incompressible fluid with a constant density ρf. The sub-domain Ωf(t) of moving boundaries evolves from some reference configuration ~Ωf according to an ALE map A given by

that is, Ωf(t)=A(~Ωf,t). The ALE map A is considered to be an extension of the displacement ~ξs of the interface ~Γc=∂~Ωs∩∂~Ωf, that is to say

The operator Ext stands for an extension of the displacement of the boundary ~Γc. Possible extensions can be found in [19, Section 5.3], [5, Chapter 2] (harmonic, biharmonic, wislow, etc.). In particular we consider the harmonic extension as we will see in Subsection 2.1. The deformation gradient associated to A is Ff:~Ωf×R+⟶M3(R) defined by Ff=∇~xA where the symbol ∇~x indicates the gradient with respect to the variable ~x=(~x1,~x2,~x3). Its Jacobian is Jf(~x,t)=det(Ff(~x,t)).

The Cauchy stress tensor σf(v,pf) is expressed in terms of the strain tensor D(v)=∇v+(∇v)t2 as

where μ=μ(D(v)) represents the blood viscosity that will be detailed in the sequel. In the reference configuration ~Ωf, the stress tensor is given by

The variable ~phs, called the hydrostatic pressure, plays the role of the Lagrange multiplier associated to the incompressibility condition det(Fs)=1.

On the fluid domain Ωf(t), a volumetric force ff:Ωf×R+⟶R3 is applied. Moreover, a velocity vin is enforced on the inlet of the artery Γin(t). On the contrary, a free-exit condition given by σf(v,pf)nf=0 is enforced on the outlet Γout(t). On the other hand, a volumetric force fs:~Ωs×R+⟶R3 is applied on the structure domain which is assumed to be fixed on the boundary ~Γ2, that is to say, ~ξs=0 on ~Γ2. On the interface Γc(t), surface forces gf:Ωf×R+⟶R3 and gs:Ωs×R+⟶R3 are exerted from the fluid domain and the structure domain, respectively.

where ~v and ~pf are given by (3). Further, ~Γc is the transformation of Γc to the reference configuration. Figure 1 illustrates a 3D model of an artery in the actual configuration including the boundaries.

From Expression (2) we get that the ALE map A and the structure deformation φs coincide on the interface ~Γc, that is to say,

Due to the incompressibility condition the ij-th component of σf(v,pf) is

The variational formulation associated to System (5) is Find

2.1. The Discrete Variational Formulation of the FSI Problem

The variational formulation (7)-(10) of the FSI stands for the incompressible homogeneous Navier-Stokes equations coupled with the quasi-static incompressible equilibrium equations. We assume that no external forces are exerted on neither the fluid domain nor the structure domain, i.e, ff=0 and ~fs=0. Consider a time step Δt>0 and finite element partitions Vh and Wh for the fluid and the solid sub-domains respectively, of a maximum diameter denoted by h. Our aim is to approximate the solution (v,pf,~ξs,~phs,A) at time tn=nΔt, for n∈N, in the finite element spaces. The approximation of the solution at time tn is denoted by (vn,pnf,~ξns,~pnhs,An).

Semi-Discretization in Time of the Fluid Sub-Problem

In order to guarantee the existence and uniqueness of the solution of the discrete fluid sub-problem when performing the numerical simulations, we use the penalty method [11]. This method consists of replacing the natural weak formulation by a regular one by adding a term multiplied by a sufficiently small parameter ϵ≪1. Indeed, writing the modified formulation in a matrix form results a positive definite matrix, which assures the existence and the uniqueness of the solution of the discrete sub-problem. The weak formulation associated to the Navier-Stokes equations obtained upon adding a negligible parameter ϵ is then semi-discretized in time, that is, the convective term and the viscosity are considered at the instant tn, whereas other terms are considered at time tn+1. The discrete formulation reads

Notice that, since the strain rate tensor D(v) is symmetric, then we have D(v):∇ηf=D(v):D(ηf) which gives

Newton-Raphson Method for the Structure Sub-Problem

The method depends on linearizing the structure sub-problem (13) with respect to the unknowns φs and ~phs. We start initialization by considering a suitable choice of the initial values (φs,0,~phs,0). In particular, we link the iterations of the Newton-Raphson method with the time iteration tn by considering φs,0=φns and ~phs,0=~pnhs. Then, we solve iteratively the obtained system corresponding to the Newton-Raphson method until its solution converges to a solution of the non-linear System (9). To ensure the existence of the solution of the structure problem (13) we use the penalty method by modifying System (13) through adding the penalized term ϵ∫~Ωs~phs~qs d~x with ϵ≪1. For simplicity of notation, in what follows we omit the subscript s of the deformation φs, that is, we write φs≡φ.

We proceed to derive the formulation of the structure sub-problem corresponding to the Newton-Raphson method. Let us define the following space

Given N∈N, a tolerance tol and

Space Discretization of the FSI Problem

and those associated to the structure weak formulation

where Vfh, Wfh, ~Vsh and ~Wsh are finite dimensional subspaces. The functional spaces associated to the velocity and displacement fields are considered to be P2, whereas those associated to the pressures (fluid and hydrostatic) are considered to be P1. In what follows, all terms are discretized in space as mentioned above, so that the approximation of solution in finite element spaces is (vh,pfh,~ξsh,~phsh,Ah) verifying (11) and (14). Finally, the discrete variational formulation reads:

where the non-linear convective term 1Δt(vnh∘Xnh) is approximated by the Expression (12). The coupling conditions on ~Γc are