Weight quantization is one of the most important techniques of Deep Neural Networks (DNNs) model compression method. A recent work using systematic framework of DNN weight quantization with the advanced optimization algorithm ADMM (Alternating Direction Methods of Multipliers) achieves one of state-of-art results in weight quantization. In this work, we first extend such ADMM-based framework to guarantee solution feasibility and we have further developed a multi-step, progressive DNN weight quantization framework, with dual benefits of (i) achieving further weight quantization thanks to the special property of ADMM regularization, and (ii) reducing the search space within each step. Extensive experimental results demonstrate the superior performance compared with prior work. Some highlights: we derive the first lossless and fully binarized (for all layers) LeNet-5 for MNIST; And we derive the first fully binarized (for all layers) VGG-16 for CIFAR-10 and ResNet for ImageNet with reasonable accuracy loss. 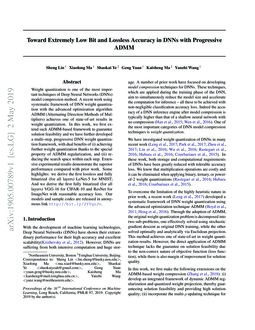 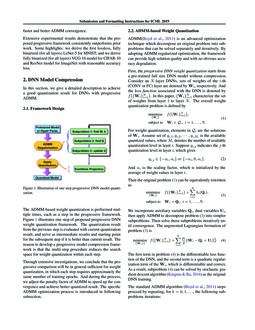 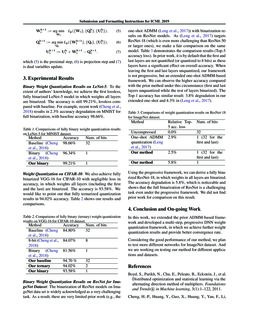 With the development of machine learning technologies, Deep Neural Networks (DNNs) have shown their extraordinary performance for their high accuracy and excellent scalability(Krizhevsky et al., 2012). However, DNNs are suffering from both intensive computation and huge storage. A number of prior work have focused on developing model compression techniques for DNNs. These techniques, which are applied during the training phase of the DNN, aim to simultaneously reduce the model size and accelerate the computation for inference – all these to be achieved with non-negligible classification accuracy loss. Indeed the accuracy of a DNN inference engine after model compression is typically higher than that of a shallow neural network with no compression (Han et al., 2015; Wen et al., 2016). One of the most important categories of DNN model compression techniques is weight quantization.

To overcome the limitation of the highly heuristic nature in prior work, a recent work

. Through the adoption of ADMM, the original weight quantization problem is decomposed into two sub-problems, one effectively solved using stochastic gradient descent as original DNN training, while the other solved optimally and analytically via Euclidean projection. This method achieves one of state-of-art in weight quantization results. However, the direct application of ADMM technique lacks the guarantee on solution feasibility due to the non-convex nature of objective function (loss function), while there is also margin of improvement for solution quality.

Extensive experimental results demonstrate that the proposed progressive framework consistently outperforms prior work. Some highlights: we derive the first lossless, fully binarized (for all layers) LeNet-5 for MNIST; and we derive fully binarized (for all layers) VGG-16 model for CIFAR-10 and ResNet model for ImageNet with reasonable accuracy loss.

In this section, we give a detailed description to achieve a good quantization result for DNNs with progressive ADMM.

Through extensive investigations, we conclude that the progressive comparison will be in general sufficient for weight quantization, in which each step requires approximately the same number of training epochs. And during the process, we adjust the penalty factor of ADMM to speed up the convergence and achieve better quantized result. The specific ADMM optimization process is introduced in following subsection.

ADMM(Boyd et al., 2011) is an advanced optimization technique which decompose an original problem into sub-problems that can be solved separately and iteratively. By adopting ADMM regularized optimization, the framework can provide high solution quality and with no obvious accuracy degradation.

First, the progressive DNN weight quantization starts from a pre-trained full size DNN model without compression. Consider an N-layer DNNs, sets of weights of the i-th (CONV or FC) layer are denoted by Wi, respectively. And the loss function associated with the DNN is denoted by f({Wi}Ni=1). In this paper, {Wi}Ni=1 characterize the set of weights from layer 1 to layer N. The overall weight quantization problem is defined by

And αi is the scaling factor, which is initialized by the average of weight values in layer i.

Then the original problem (1) can be equivalently rewritten as

We incorporate auxiliary variables Qi, dual variables Ui, then apply ADMM to decompose problem (3) into simpler subproblems. Then solve these subproblems iteratively until convergence. The augmented Lagrangian formation of problem (3) is

The first term in problem (4) is the differentiable loss function of the DNN, and the second term is a quadratic regularization term of the Wi, which is differentiable and convex. As a result, subproblem (4) can be solved by stochastic gradient descent algorithm (Kingma & Ba, 2014) as the original DNN training.

which (5) is the proximal step, (6) is projection step and (7) is dual variables update.

Binary Weight Quantization Results on LeNet-5: To the extent of authors’ knowledge, we achieve the first lossless, fully binarized LeNet-5 model in which weights all layers are binarized. The accuracy is still 99.21%, lossless compared with baseline. For example, recent work (Cheng et al., 2018) results in 2.3% accuracy degradation on MNIST for full binarization, with baseline accuracy 98.66%.

Weight Quantization on CIFAR-10: We also achieve fully binarized VGG-16 for CIFAR-10 with negligible loss in accuracy, in which weights all layers (including the first and the last) are binarized. The accuracy is 93.58%. We would like to point out that fully ternarized quantization results in 94.02% accuracy. Table 2 shows our results and comparisons.

Binary Weight Quantization Results on ResNet for ImageNet Dataset: The binarization of ResNet models on ImageNet data set is widely acknowledged as a very challenging task. As a result, there are very limited prior work (e.g., the one-shot ADMM (Leng et al., 2017)) with binarization results on ResNet models. As (Leng et al., 2017) targets ResNet-18 (which is even more challenging than ResNet-50 or larger ones), we make a fair comparison on the same model. Table 3 demonstrates the comparison results (Top-5 accuracy loss). In prior work, it is by default that the first and last layers are not quantified (or quantized to 8 bits) as these layers have a significant effect on overall accuracy. When leaving the first and last layers unquantized, our framework is not progressive, but an extended one-shot ADMM-based framework. We can observe the higher accuracy compared with the prior method under this circumstance (first and last layers unquantized while the rest of layers binarized). The Top-1 accuracy has similar result: 3.8% degradation in our extended one-shot and 4.3% in (Leng et al., 2017).

Considering the good performance of our method, we plan to test more different networks for ImageNet dataset. And we are working on testing our method for different applications and datasets.