Semantic segmentation of large-scale outdoor point clouds is essential for urban scene understanding in various applications, especially autonomous driving and urban high-definition (HD) mapping. With rapid developments of mobile laser scanning (MLS) or mobile Light Detection and Ranging (LiDAR) systems, massive point clouds are available for scene understanding, but publicly accessible large-scale labeled datasets, which are essential for developing learning-based methods, are still limited. This paper introduces Toronto-3D, a large-scale urban outdoor point cloud dataset acquired by a MLS system in Toronto, Canada for semantic segmentation. This dataset covers approximately 1 km of point clouds and consists of about 78.3 million points with 8 labeled object classes. Baseline experiments for semantic segmentation were conducted and the results confirmed the capability of this dataset to train deep learning models effectively. Toronto-3D will be publicly released to encourage new research activities, and the labels will be further improved and updated with feedback from the research community. 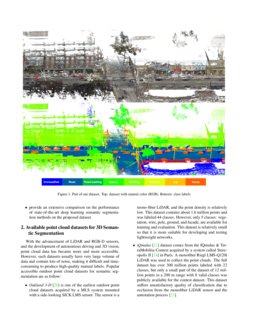 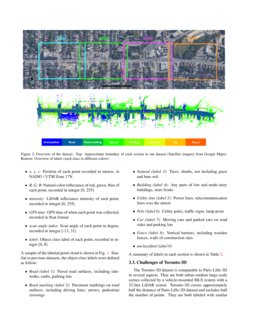 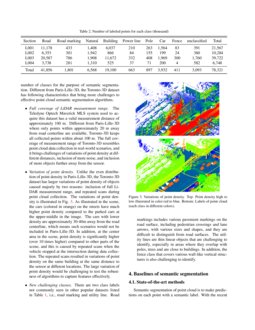 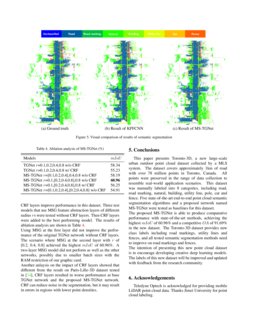 Towards Semantic Segmentation of Urban-Scale 3D Point Clouds: A Dataset, Benchmarks and Challenges

Accurate and efficient scene perception of urban environments are crucial for various applications, including HD mapping, autonomous driving, 3D model reconstruction, and smart city [3]. In the past decade, the largest portion of research in urban mapping is using 2D satellite and airborne imagery [5, 14], and utonomous driving researches also relied heavily on 2D images captured by digital cameras [23]. Compared with 2D images that are short of georeferenced 3D information, 3D point clouds collected by LiDAR sensors has become desirable for urban studies [15, 22]. However, point clouds are unstructured, unordered and are usually in a large volume [19]. Deep learning algorithms have shown advantages tackling these challenges in point cloud processing in various tasks, including semantic segmentation [2, 21], object detection [4, 34], classification [13, 20], and localization [6, 30]. Mobile platforms that integrate MLS sensors, location sensors (e.g. Global Navigation Satellite Systems (GNSS)), and cameras cameras (e.g. panoramic and digital cameras) are gaining popularity in urban mapping and autonomous driving due to the flexibility of data collection [10, 33], but training effective deep learning models is not feasible without high-quality labels of the point clouds [1]. The development of deep learning has always been driven by high-quality datasets and benchmarks [28]. They allow researchers to focus on improving performance of algorithms without the hassle of collecting, cleaning and labeling large amount of data. They also ensure the performance of the algorithms are comparable with each other. In this paper, Toronto-3D, a new large-scale urban outdoor point cloud dataset acquired by MLS system is presented.

This dataset covers approximately 1km of point clouds and consists of about 78.3 million points. An example of the proposed dataset is shown in Fig. 1. The main contributions of this paper are:

With the advancement of LiDAR and RGB-D sensors, and the development of autonomous driving and 3D vision, point cloud data has became more and more accessible. However, such datasets usually have very large volume of data and contain lots of noise, making it difficult and time-consuming to produce high-quality manual labels. Popular accessible outdoor point cloud datasets for semantic segmentation are as follow:

Development and validation of deep learning algorithms demand more datasets in different parts of the world with various object labels. Toronto-3D is introduced in this paper to provide an additional high-quality point cloud dataset for 3D semantic segmentation with new labels. Table 1 shows a comparison of comprehensive indicators of different datasets.

The point clouds in this dataset were acquired with a vehicle-mounted MLS system: Teledyne Optech Maverick111http://www.teledyneoptech.com/en/products/mobile-survey/maverick/. The system consists of a 32-line LiDAR sensor, a Ladybug 5 panoramic camera, a GNSS system, and a Simultaneous localization and mapping (SLAM) system. The collected point clouds were further processed with LMS Pro222https://www.teledyneoptech.com/en/products/software/lms-pro/ software. Natural color (RGB) was assigned to each point according to the imaging camera.

3.2 Description of the dataset

This dataset was collected on Avenue Road in Toronto, Canada, covering approximately 1 km of road segment with approximately 78.3 million points. This dataset is divided into four sections, and each section covers a range of about 250 m. An overview of the approximate boundary of each section is illustrated in Fig. 2. This dataset is collected using a 32-line LiDAR sensor, and the point clouds have high density of about 1000 points/m2 on the ground on average. The dataset covers the full range of the MLS sensor of approximately 100 m away from the road centerline without trimming. Limited post-processing was done to resemble real-world point cloud collection scenarios. Each of the four sections of the dataset was saved separately in .ply

333https://www.cloudcompare.org. Each point cloud file has the following 7 attributes:

A sample of the labeled point cloud is shown in Fig. 1. Similar to previous datasets, the object class labels were defined as follow:

A summary of labels in each section is shown in Table 2.

The Toronto-3D dataset is comparable to Paris-Lille-3D in several aspects. They are both urban outdoor large-scale scenes collected by a vehicle-mounted MLS system with a 32-line LiDAR sensor. Toronto-3D covers approximately half the distance of Paris-Lille-3D dataset and includes half the number of points. They are both labeled with similar number of classes for the purpose of semantic segmentation. Different from Paris-Lille-3D, the Toronto-3D dataset has following characteristics that bring more challenges to effective point cloud semantic segmentation algorithms.

The view-based models such as MVCNN [26] project 3D point clouds into multiple views as 2D images, but they do not fully use the rich 3D information. Voxel-based models such as VoxNet [16] and 3D-CNN [9] structure unordered point clouds into voxel grids, so that known structures and methods of 2D images can be extended to 3D space. However, the nature of point clouds that they are sparse and have various densities make voxelization inefficient. Point-based methods directly process unordered and unstructured point clouds to capture 3D spatial features. Starting from PointNet [19]

[21], PointCNN [11]. Graph models were also applied to extract spatial features in point-based models, and such methods include ECC [25] and DGCNN [31]. Six state-of-the-art point-based deep learning models were tested on the proposed dataset as baseline approaches:

Based on the above different methods, a new integration network, named MS-TGNet was proposed in this paper.

Considering the full range of approximately 100m from the road centerline was preserved in this dataset, the density of point cloud have a large difference at different distances to the sensor. Multi-scale grouping (MSG) proposed in PointNet++ [21] was designed to capture features more effectively in point clouds with large variations in point density. A revised structure of TGNet [12] called MS-TGNet is proposed to evaluate the effectiveness of MSG layers on this new dataset. The revised structure with a U-shaped structure with 3 layers is illustrated in Fig. 4. A MSG layer was utilized in the second layer of the original TGNet architecture to capture local geometric features at three different radius. In addition, the CRF layer was removed from the network according to the negative impacts on the results of ablation analysis.

For the evaluation of semantic segmentation results, intersection over union (IoU) of each class, overall accuracy (OA) and mean IoU (mIoU) are used.

where N is the total number of labels, n is the nth label in N, TP, FP and FN represent number of points of true positives, false positives and false negatives of the predictions respectively. OA and mIoU evaluate the overall quality of semantic segmentation, and IoU of each class measures the performance on each class.

Among the four sections of the dataset, L002 was selected as the testing set due to its smaller number of points and balanced number of points of each label, while the other three sections were used for training and validation. For fair comparison, only coordinates (x,y,z) of point clouds were used in this paper, and the results are shown in Table 3. Note that the corresponding model source codes from GitHub of the state-of-the-art methods were directly adopted without parameter tuning. The results were achieved using a NVIDIA RTX 2080Ti with 11G of RAM, and batch sizes were adjusted accordingly. The results are for baseline illustration purpose only, and better results could be achieved with other parameter settings. PointNet++ [21] achieved a mIoU of 56.55%, and achieved highest IoUs in road and car classification. However, the PointNet++ model with MSG modules did not perform as well as the base PointNet++ architecture showing its potential limited effects in large-scale datasets. DGCNN [31] performed the worst in terms of both OA and mIoU

in our dataset. Since DGCNN uses KNN for construction of graphs to capture local features, it may not perform well in this dataset with various point density. The parameter settings of PointNet++ and DGCNN were directly used from the networks for indoor scenes, which limits the performance of these two algorithms to some extent.

KPFCNN [27] is on the top spot of Paris-Lille-3D benchmark, and it achieved the highest OA and mIoU among the tested state-of-the-art algorithms. The deformed KPConv operator has shown its advantage of adapting to different shapes over other methods, achieving the highest IoU in building, utility line and fence segmentation. MS-PCNN [15] captures both point and edge features at multiple scales, and performed only next to KPFCNN. TGNet did not show an advantage over other networks, but mIoU of 58.34% can be achieved with the removal of the CRF layer (discussed later in ablation studies). The proposed MS-TGNet achieved comparable results compared with KPFCNN, achieving the highest mIoU of 60.96% and next to highest OA of 91.69% in the baseline results. A visual comparison of semantic segmentation results of KPFCNN and MS-TGNet with ground truth is shown in Fig. 5. They both have good performance in terms of OA and mIoU, but KPFCNN failed to distinguish road markings from road surfaces by visual inspections. However, none the tested methods reached over 25% IoU on road marking and fence classification.

Ablation studies were conducted on the effectiveness of adopting MSG in TGNet at different layers, and whether CRF layers improve performance in this dataset. Three test models that use MSG feature abstraction layers of different radius rs were tested without CRF layers. Then CRF layers were added to the best performing model. The results of ablation analysis are shown in Table 4.

Using MSG at the first layer did not improve the performance of the original TGNet network without CRF layers. The scenario where MSG at the second layer with r of [0.2, 0.4, 0.8] achieved the highest mIoU of 60.96%. A two-layer MSG model did not perform as well as the other networks, possibly due to smaller batch sizes with the RAM restriction of our graphic card. Another anlaysis on the impact of CRF layers showed that different from the result on Paris-Lille-3D dataset tested in [12], CRF layers resulted in worse performance at base TGNet network and the proposed MS-TGNet network. CRF can reduce noise in the segmentation, but it may result in errors in regions with lower point densities.

This paper presents Toronto-3D, a new large-scale urban outdoor point cloud dataset collected by a MLS system. The dataset covers approximately 1km of road with over 78 million points in Toronto, Canada. All points were preserved in the range of data collection to resemble real-world application scenarios. This dataset was manually labeled into 8 categories, including road, road marking, natural, building, utility line, pole, car and fence. Five state-of-the-art end-to-end point cloud semantic segmentation algorithms and a proposed network named MS-TGNet were tested as baselines for this dataset. The proposed MS-TGNet is able to produce comparative performance with state-of-the-art methods, achieving the highest mIoU of 60.96% and a competitive OA of 91.69% in the new dataset. The Toronto-3D dataset provides new class labels including road markings, utility lines and fences, and all tested semantic segmentation methods need to improve on road markings and fences. The intention of presenting this new point cloud dataset is to encourage developing creative deep learning models. The labels of this new dataset will be improved and updated with feedback from the research community.