Topological and Geometric Reconstruction of Metric Graphs in R^n

We propose an algorithm to estimate the topology of an embedded metric graph from a well-sampled finite subset of the underlying graph. 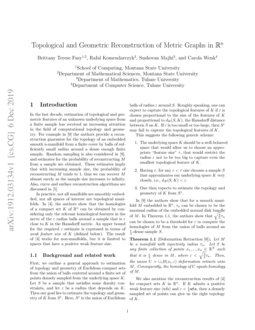 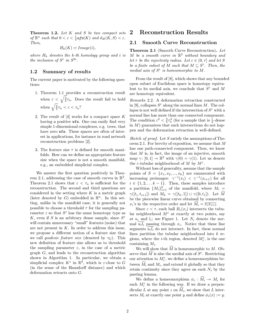 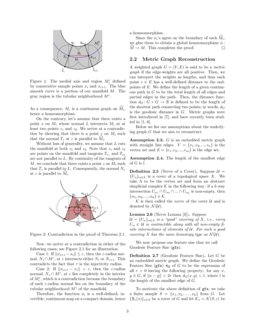 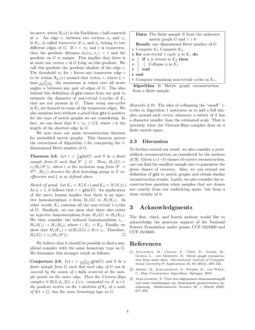 In the last decade, estimation of topological and geometric features of an unknown underlying space from a finite sample has received an increasing attention in the field of computational topology and geometry. For example in [9] the authors provide a reconstruction guarantee for the topology of an embedded smooth n-manifold from a finite cover by balls of sufficiently small radius around a dense enough finite sample. Random sampling is also considered in [9]

, and estimates for the probability of reconstructing

M from a sample are obtained. These estimates imply that with increasing sample size, the probability of reconstructing M tends to 1, thus we can recover M almost surely as the sample size increases to infinity. Also, curve and surface reconstruction algorithms are discussed in [5]

In practice, not all manifolds are smoothly embedded, nor all spaces of interest are topological manifolds. In [4], the authors show that the homologies of a compact set K of Rn can be obtained by considering only the relevant homological features in the nerve of the \eps radius balls around a sample that is \eps close to K in the Hausdorff metric. An upper bound for the required \eps estimate is expressed in terms of weak feature size of K (defined below). The result of [4] works for non-manifolds, but it is limited to spaces that have a positive weak feature size.

First, we outline a general approach to estimation of topology and geometry of Euclidean compact sets from the union of balls centered around a finite set of points densely sampled from the underlying space K. Let S be a sample that satisfies some density constraints, and let \eps be a radius that depends on K. Then our goal lies to estimate the topology and geometry of K from S\eps. Here, S\eps is the union of Euclidean balls of radius \eps around S. Roughly speaking, one can expect to capture the topological features of K if \eps is chosen proportional to the size of the features of K and proportional to dH(S,K), the Hausdorff distance between S an K. If \eps is too small or too large, then S\eps may fail to capture the topological features of K.

This suggests the following generic scheme:

[Deformation Retraction [9]] Let M be a manifold with injectivity radius τn. Let ¯¯¯x be any finite collection of points x1,...,xn∈RN such that it is \eps2 dense in M, where \eps<√35τn. Then, the union U=∪iB(xi,\eps) deformation retracts onto M. Consequently, the homology of U equals homology of M.

We also mention the reconstruction results of [4] for compact sets K in Rn. If K admits a positive weak feature size (wfs) and \eps<14\wfs, then a densely sampled set of points can give us the right topology of K.

where Hk denotes the k-th homology group and i is the inclusion of S\eps in S3\eps.

The current paper is motivated by the following questions:

We answer the first question positively in thm:1d, addressing the case of smooth curves in R2. thm:1d shows that \eps<τn is sufficient for the reconstruction. The second and third questions are considered in the setting where K is a metric graph (later denoted by G) embedded in \Rn. In this setting, unlike in the manifold case, it is generally not possible to choose a threshold τ for the sampling parameter \eps so that S\eps has the same homotopy type as K, even if S is an arbitrary dense sample, since S\eps will contain unnecessary “small” features (noise) that are not present in K. In order to address this issue, we propose a different notion of a feature size that we call geodesic feature size (denoted by τG). This new definition of feature size allows us to threshold the sampling parameter \eps, in the case of a metric graph G, and leads to the reconstruction algorithm shown in alg:graph. In particular, we obtain a simplicial complex K\eps in R2, which is \eps-close to G (in the sense of the Hausdorff distance) and which deformation retracts onto G.

[Smooth Curve Reconstruction] Let M be a smooth curve in R2 without boundary and let τ be the injectivity radius. Let \eps∈(0,τ] and let S be a finite subset of M such that M⊆S\eps. Then, the medial axis of S\eps is homeomorphic to M.

A deformation retraction constructed in [9], collapses S\eps along the normal lines M. The collapse is not well defined if the intersection of S\eps with a normal line has more than one connected component. The condition \eps2<35τ2n (for a sample that is \eps2-dense in M) guarantees that such intersections do not happen and the deformation retraction is well-defined.

Let S satisfy the assumptions of thm:1d. For brevity of exposition, we assume that M has one path-connected component. Then, we know that M is, in fact, the image of an injective, smooth map γ:[0,1]→\R2 with γ(0)=γ(1). Let us denote the \eps-tubular neighborhood of M by M\eps.

Since \eps<τ, each ball B\eps(xi) intersects the tubular neighborhood M\eps at exactly at two points, say at ui and li; see fig:medialAxis. Let Ni denote the normal ¯¯¯¯¯¯¯¯uili passing through xi. Notice that these line segments ¯¯¯¯¯¯¯¯uili do not intersect. In fact, these normal lines partition the tubular neighborhood into k regions, where the i-th region, denoted M\epsi, is the one containing Mi.

We will show that ˆM is homeomorphic to M. Observe that ˆM is also the medial axis of S\eps. Restricting our attention to M\epsi, we define a homeomorphism between ˆMi and Mi, and extend it globally so that they retain continuity since they agree on each Ni by the pasting lemma.

We define a homeomorphism ϕi:ˆMi→Mi for each M\epsi in the following way. If we draw a perpendicular L at any point z on ˆMi, we show that L intersects Mi at exactly one point y and define ϕi(x):=y. As a consequence, Mi is a continuous graph on ˆMi, hence a homeomorphism.

On the contrary, let’s assume that there exists a point x on Mi whose normal L intersects Mi at at least two points z1 and z2. We arrive at a contradiction by showing that there is a point z on Mi such that the normal Tz at z is parallel to ˆMi.

Now, we arrive at a contradiction in either of the following cases; see thm:1d for an illustration.

Case 1: If ||xi+1−xi||≤\eps, then the \eps-radius normal, Nz∩M\eps, at z intersects either Ni or Ni+1. This contradicts the fact that τ is the injectivity radius.

Therefore, the function ϕi is a well-defined, invertible, continuous map on a compact domain, hence a homeomorphism.

Since the ϕi’s agree on the boundary of each ˆMi, we glue them to obtain a global homeomorphism ϕ:ˆM→M. This completes the proof.

A weighted graph G=(V,E) is said to be a metric graph if the edge-weights are all positive. Then, we can interpret the weights as lengths, and thus each point e∈E has a well-defined distance to the endpoints of E. We define the length of a given continuous path in G to be the total length of all edges and partial edges in the path. Then, the distance function dG:G×G→\R is defined to be the length of the shortest path connecting two points; in words, dG is the geodesic distance in G. Metric graphs were first introduced in [7], and have recently been studied in [1, 6].

Below we list our assumptions about the underlying graph G that we aim to reconstruct.

The length of the smallest edge of G is l.

[Nerve of a Cover] Suppose U={Uα}α∈Λ is a cover of a topological space X. We take Λ to be the vertex set and form an abstract simplicial complex K in the following way: if a k-way intersection Uα1∩Uα2∩...∩Uαk is non-empty, then {α1,α2,...,αk}∈K.

K is then called the nerve of the cover U and is denoted by N(U).

[Nerve Lemma [3]] Suppose U={Uα}α∈Λ is a “good” covering of X, i.e., every Uα∈U is contractible along with all non-empty finite intersections of elements of U. For such a good covering X has the same homotopy type as N(U).

To motivate the above definition of , we take a finite sample S={x1,x2,…,xk} from G. Let {\B\eps(x)}x∈S be a cover of G and let K1=N(S,\eps) be its nerve, where \B\eps(x) is the Euclidean \eps-ball centered at x. An edge e, between two vertices xi and xj in K1, is called transverse if xi and xj belong to two different edges of G. If \eps<τG and e is transverse, then the geodesic distance dG(xi,xj)<l and the geodesic on G is unique. This implies that there is at most one vertex v of G lying on this geodesic. We call this geodesic the geodesic shadow of the edge e. The threshold τG for \eps forces any transverse edge e to be within \Bξϵ(v) around that vertex v, where ξ=max1sin(α/2), the maximum is taken over all acute angles α between any pair of edges of G. The idea behind this definition of \gfs comes from our goal to estimate the diameter of non-trivial 1-cycles of K1 that are not present in G. These noisy one-cycles in K1 are formed by some of the transverse edges. We also mention here without a proof that \gfs is positive for the type of metric graphs we are considering. In fact, we can show that 0<τG≤l/2, where l is the length of the shortest edge in G.

We now state our main reconstruction theorem for embedded metric graphs. This theorem proves the correctness of alg:graph for computing the 1-dimensional Betti number of G.

Let \eps<1ξ\gfs(G) and S be a finite sample from G such that S\eps⊇G. Then, H1(G)=i∗(H1(S\eps)), where i is the inclusion map from S\eps→Sξ\eps, H1(⋅) denotes the first homology group in \Z coefficients and ξ is as defined above.

We believe that it should be possible to find a simplicial complex with the same homotopy type as G. We formulate this stronger result as follows:

Let \eps<12(2+ξ)\gfs(G) and S be a finite sample from G such that each edge of G can be covered by the union of \eps-balls centered at the sample points on the same edge. Then the Vietoris-Rips complex VR(S,d\eps,2(1+ξ)\eps), computed on S w.r.t. the geodesic metric on the 1-skeleton of K1 at a scale of 2(1+ξ), has the same homotopy type as G.

The idea of collapsing the “small” 1-cycles in alg:graph motivates us to add a full simplex around each vertex whenever a subset of S has a diameter smaller than the estimated scale. That is precisely what the Vietoris-Rips complex does on a finite metric space.

The first, third, and fourth authors would like to acknowledge the generous support of the National Science Foundation under grants CCF-1618469 and CCF-1618605.