Recent research in tomographic reconstruction is motivated by the need to efficiently recover detailed anatomy from limited measurements. One of the ways to compensate for the increasingly sparse sets of measurements is to exploit the information from templates, i.e., prior data available in the form of already reconstructed, structurally similar images. Towards this, previous work has exploited using a set of global and patch based dictionary priors. In this paper, we propose a global prior to improve both the speed and quality of tomographic reconstruction within a Compressive Sensing framework. We choose a set of potential representative 2D images referred to as templates, to build an eigenspace; this is subsequently used to guide the iterative reconstruction of a similar slice from sparse acquisition data. Our experiments across a diverse range of datasets show that reconstruction using an appropriate global prior, apart from being faster, gives a much lower reconstruction error when compared to the state of the art. 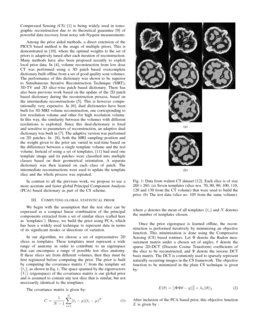 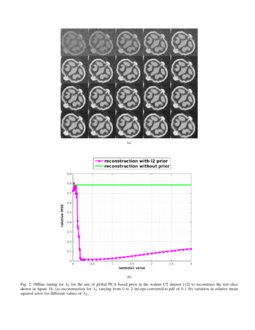 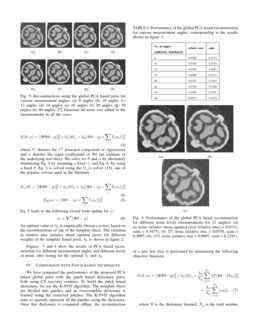 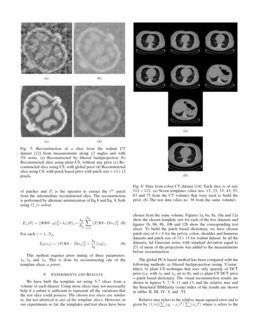 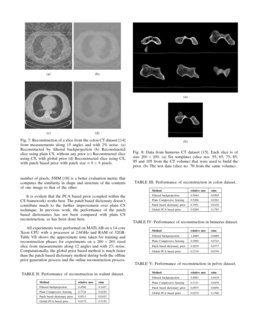 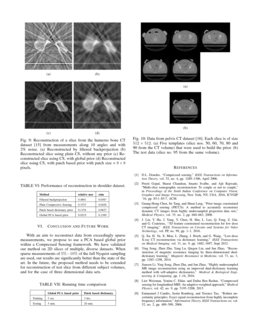 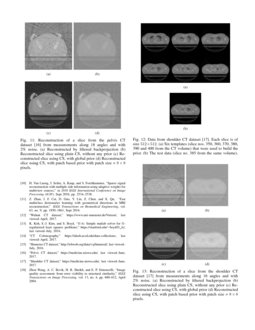 In this paper, we propose the generative patch prior (GPP) that defines ...
Rushil Anirudh, et al. ∙

Learning from past scans: Tomographic reconstruction to detect new structures

Reconstruction of signals from compressively sensed measurements is an i...
Akshat Dave, et al. ∙

In this paper we study the reconstruction of binary sparse signals from ...
Sandra Keiper, et al. ∙

partitioned a volume comprised of consecutive 2D slices into local groups of slices before performing the reconstruction of this volume from a sparse set of projected views. The grouping of these slices was based on their structural similarity, as measured through a comparison of the invariant moments of their projected views. Acquiring local knowledge of the object structure enabled significant improvement, as now the CS reconstruction could be performed on groups of similar slices that were able to be reconstructed much better than the individual, slice by slice CS reconstructions. In addition to this, recent research has also focussed on using known information that is

specific to the type of data being measured, for example, an existing similar data, also known as the prior. Such a technique has been referred to as Prior Image Constrained Compressed Sensing (PICCS) [3]. Here, the similarity between the prior and the reconstructed data is explicitly enforced in the iterative routines. This offers further reduction in sampling when compared to plain CS, for a desired reconstruction quality.

However, in scenarios where the similarity of the prior and test data are not guaranteed, the application of PICCS will hurt the reconstruction. Moreover, selecting any one particular optimal slice or volume as a prior from a huge amount of available data, can be challenging. To evade this shortcoming, a large amount of work has been done on the usage of a set of slices or volumes as prior data [4], [5], [6], [7], [8]

. The similarity of the test slice to any one of the templates is then more probable. One application scenario for using a prior is in the case of long-term treatments, in which a subject might undergo CT scan multiple times. The subsequent scans can then be taken with fewer projections by exploiting the information available from all or a few of the previous good quality scans.

Contributions: In this work, we develop on the idea of using multiple templates by hypothesizing that the test slice may not be exactly similar to any of the slices in the template set, but lies in the subspace spanned by the templates. In such a case, the test slice can be expressed as a linear combination of the principal components of the template slices. Hence, we form an eigenspace from a set of template slices and use this as our prior data. We have compared our results with plain CS, filtered back-projection and patch based dictionary methods and observed a substantial improvement with highly undersampled and noisy measurements.

Among the prior aided methods, a direct extension of the PICCS based method is the usage of multiple priors. This is demonstrated in [10], where the optimal weights to the set of priors is adaptively tuned after each iteration of reconstruction. Many methods have also been proposed recently to exploit local prior data. In [4], volume reconstruction from low dose CT was performed using a 3D patch based overcomplete dictionary built offline from a set of good quality scan volumes. The performance of this dictionary was shown to be superior to Simultaneous Iterative Reconstruction Technique (SIRT), 3D-TV and 2D slice-wise patch based dictionary. There has also been previous work based on the update of the 2D patch based dictionary during the reconstruction process, based on the intermediate reconstructions [5]. This is however computationally very expensive. In [6], dual dictionaries have been built for 3D MRI volume reconstruction, one corresponding to low resolution volume and other for high resolution volume. In this way, the similarity between the volumes with different resolutions is exploited. Since this dual-dictionary is fixed and sensitive to parameters of reconstruction, an adaptive dual dictionary was built in [7]. The adaptive version was performed on 2D patches. In  [8], both the MRI sampling position and the weight given to the prior are varied in real-time based on the differences between a single template volume and the test volume. Instead of using a set of templates, [11]

had used one template image and its patches were classified into multiple classes based on their geometrical orientation. A separate dictionary was then learned on each class of patch. The intermediate reconstructions were used to update the template slice and the whole process was repeated.

In contrast to all the previous work, we propose to use a more accurate and faster global Principal Component Analysis (PCA) based dictionary as part of the CS scheme.

We begin with the assumption that the test slice can be expressed as a compact linear combination of the principal components extracted from a set of similar slices (called here as ‘templates’). Hence, we build the prior using PCA, which has been a widely used technique to represent data in terms of its significant modes or directions of variation.

In our algorithm, we choose a set of representative 2D slices as templates. These templates must represent a wide range of anatomy in order to contribute to an eigenspace that can encompass a range of possible test slice anatomy. If these slices are from different volumes, then they must be first registered before computing the prior. The prior is built by computing the covariance matrix C from the template set {ti}, as shown in Eq. 1

, The space spanned by the eigenvectors

{Vi} (eigenspace) of the covariance matrix is our global prior and is assumed to contain any test slice that is similar, but not necessarily identical to the templates.

The covariance matrix is given by:

Once the prior eigenspace is learned offline, the reconstruction is performed iteratively by minimizing an objective function. This minimization is done using the Compressive Sensing (CS) based routines. Let Φ denote the Radon measurement matrix under a chosen set of angles, θ denote the sparse 2D-DCT (Discrete Cosine Transform) coefficients of the slice to be reconstructed, and Ψ denote the inverse DCT basis matrix. The DCT is commonly used to sparsely represent naturally occurring images in the CS framework. The objective function to be minimized in the plain CS technique is given by:

After inclusion of the PCA based prior, this objective function E is given by :

(an estimate of the underlying test slice). We solve for

θ and α by alternately minimizing Eq. 4 by assuming a fixed α, and Eq. 6, by using a fixed θ. Eq. 4 is solved using the l1_ls solver [13], one of the popular solvers used in the literature.

Eq. 5 leads to the following closed form update for α:

An optimal value of λ2 is empirically chosen a priori, based on the reconstructions of one of the template slices. The variation in relative mse (relative mean squared error) for different weights of the template based prior, λ2 is shown in figure 2.

Figures  3 and 4 show the results of PCA based reconstruction for different measurement angles and different levels of noise, after tuning for the optimal λ1 and λ2.

Iv Comparison with Patch based techniques

We have compared the performance of the proposed PCA based global prior with the patch based dictionary prior, both using CS recovery routines. To build the patch based dictionary, we use the K-SVD algorithm. The template slices are divided into patches and an overcomplete dictionary is learned using the extracted patches. The K-SVD algorithm aims to sparsely represent all the patches using the dictionary. Once this dictionary is computed offline, the reconstruction of a new test slice is performed by minimizing the following objective function:

where D is the dictionary learned, Np is the total number of patches and Pi is the operator to extract the ith patch from the intermediate reconstructed slice. The reconstruction is performed by alternate minimization of Eq 8 and Eq. 9, both using l1_ls solver.

This method requires prior tuning of three parameters: λ1,λ2 and λ3. This is done by reconstructing one of the template slices a priori.

We have built the template set using 5-7 slices from a volume of each dataset. Using more slices may not necessarily help if a subset is sufficient to represent all the variations that the test slice could possess. The chosen test slices are similar to, but not identical to any of the template slices. However, in our experiments so far, the templates and test slices have been chosen from the same volume. Figures 0(a), 5(a), 7(a), 9(a) and 11(a) show the chosen template sets for each of the five datasets and figures 0(b), 5(b), 7(b), 9(b) and 11(b) show the corresponding test slices. To build the patch based dictionary, we have chosen patch size of 8×8 for the pelvis, colon, shoulder and humerus datasets and patch size of 13×13

for walnut dataset. In all the datasets, iid Gaussian noise with standard deviation equal to

2% of mean of the projections was added to the measurements before reconstruction.

The global PCA based method has been compared with the following methods: a) filtered backprojection (using ‘Cosine’ filter), b) plain CS technique that uses only sparsity of DCT prior (i.e. with λ2 and λ3 set to 0); and c) plain CS DCT prior + patch based dictionary. The visual reconstruction results are shown in figures 5, 7, 9, 11 and 13, and the relative mse and the Structural SIMilarity (ssim) index of the results are shown in tables II, III, IV, V and  VI.

Relative mse refers to the relative mean squared error and is given by (1/n)(∑i(yi−xi)2/∑i(xi)2) where n refers to the number of pixels. SSIM [18]

is a better evaluation metric that computes the similarity in shape and structure of the contents of one image to that of the other.

All experiments were performed on MATLAB on a 14-core Xeon CPU with a processor at 2.6GHz and RAM of 32GB. Table VII shows the approximate time taken for training and reconstruction phases for experiments on a 260×260 sized slice from measurements along 12 angles and with 2% noise. Computationally, the global prior based method is much faster than the patch based dictionary method during both the offline prior generation process and the online reconstruction process.

With an aim to reconstruct data from exceedingly sparse measurements, we propose to use a PCA based global prior within a Compressed Sensing framework. We have validated our method on 2D slices of multiple, diverse datasets. When sparse measurements of 5%−10% of the full Nyquist sampling are used, our results are significantly better than the state of the art. In the future, the proposed method needs to be extended for reconstruction of test slice from different subject volumes, and for the case of three dimensional data sets.