Motivated mainly by applications to partial differential equations with random coefficients, we introduce a new class of Monte Carlo estimators, called Toeplitz Monte Carlo (TMC) estimator for approximating the integral of a multivariate function with respect to the direct product of an identical univariate probability measure. The TMC estimator generates a sequence x_1,x_2,... of i.i.d. samples for one random variable, and then uses (x_n+s-1,x_n+s-2...,x_n) with n=1,2,... as quadrature points, where s denotes the dimension. Although consecutive points have some dependency, the concatenation of all quadrature nodes is represented by a Toeplitz matrix, which allows for a fast matrix-vector multiplication. In this paper we study the variance of the TMC estimator and its dependence on the dimension s. Numerical experiments confirm the considerable efficiency improvement over the standard Monte Carlo estimator for applications to partial differential equations with random coefficients, particularly when the dimension s is large. 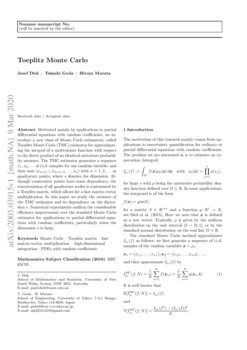 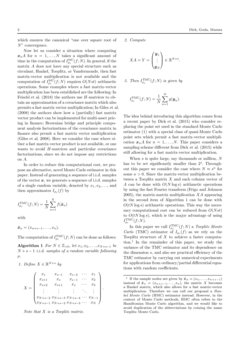 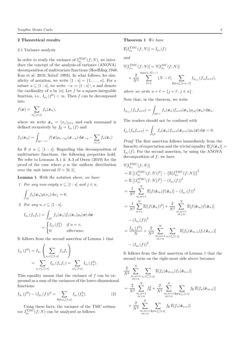 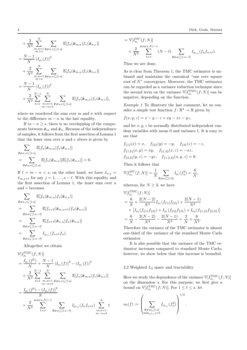 In this short note, we study a concatenation of quasi-Monte Carlo and pl...
Takashi Goda, et al. ∙

We investigate base b Walsh functions for which the variance of the inte...
Jaspar Wiart, et al. ∙

The motivation of this research mainly comes from applications to uncertainty quantification for ordinary or partial differential equations with random coefficients. The problem we are interested in is to estimate an expectation (integral)

for large s with ρ

being the univariate probability density function defined over

Ω⊆R. In some applications, the integrand is of the form

is given by the uniform distribution on the unit interval

, or by the standard normal distribution on the real line

The standard Monte Carlo method approximates Iρs(f) as follows: we first generate a sequence of i.i.d. samples of the random variables x∼ρs:

and then approximate Iρs(f) by

It is well known that

which ensures the canonical “one over square root of N” convergence.

The computation of ITMCρs(f;N) can be done as follows:

The idea behind introducing this algorithm comes from a recent paper by Dick et al. (2015) who consider replacing the point set used in the standard Monte Carlo estimator (1) with a special class of quasi-Monte Carlo point sets which permit a fast matrix-vector multiplication xnA for n=1,…,N. This paper considers a sampling scheme different from Dick et al. (2015) while still allowing for a fast matrix-vector multiplication.

When s is quite large, say thousands or million, N has to be set significantly smaller than 2s. Throughout this paper we consider the case where N≈sκ for some κ>0. Since the matrix-vector multiplication between a Toeplitz matrix X and each column vector of A can be done with O(Nlogs)

(Frigo and Johnson 2005), the matrix-matrix multiplication XA appearing in the second item of Algorithm 1 can be done with O(tNlogs) arithmetic operations. This way the necessary computational cost can be reduced from O(Nst) to O(tNlogs), which is the major advantage of using ITMCρs(f;N).

In this paper we call ITMCρs(f;N) a Toeplitz Monte Carlo (TMC) estimator of Iρs(f) as we rely on the Toeplitz structure of X to achieve a faster computation.111If the sample nodes are given by ~xn=(xn,…,xn+s−1) instead of ~xn=(xn+s−1,…,xn), the matrix X becomes a Hankel matrix, which also allows for a fast matrix-vector multiplication. Therefore we can call our proposal a Hankel Monte Carlo (HMC) estimator instead. However, in the context of Monte Carlo methods, HMC often refers to the Hamiltonian Monte Carlo algorithm, and we would like to avoid duplication of the abbreviations by coining the name Toeplitz Monte Carlo. In the remainder of this paper, we study the variance of the TMC estimator and its dependence on the dimension s, and also see practical efficiency of the TMC estimator by carrying out numerical experiments for applications from ordinary/partial differential equations with random coefficients.

for ∅≠u⊆[1:s]. Regarding this decomposition of multivariate functions, the following properties hold. We refer to Lemmas A.1 & A.3 of Owen (2019) for the proof of the case where ρ is the uniform distribution over the unit interval Ω=[0,1].

With the notation above, we have:

It follows from the second assertion of Lemma 1 that

This equality means that the variance of f can be expressed as a sum of the variances of the lower-dimensional functions:

Using these facts, the variance of the TMC estimator ITMCρs(f;N) can be analyzed as follows:

Note that, in the theorem, we write

The readers should not be confused with

The first assertion follows immediately from the linearity of expectation and the trivial equality E[f(~xn)]=Iρs(f). For the second assertion, by using the ANOVA decomposition of f, we have

where we reordered the sum over m and n with respect to the difference m−n in the last equality.

If m−n≥s, there is no overlapping of the components between ~xm and ~xn. Because of the independence of samples, it follows from the first assertion of Lemma 1 that the inner sum over u and v above is given by

As is clear from Theorem 2.1, the TMC estimator is unbiased and maintains the canonical “one over square root of N” convergence. Moreover, the TMC estimator can be regarded as a variance reduction technique since the second term on the variance V[ITMCρs(f;N)] can be negative, depending on the function.

To illustrate the last comment, let us consider a simple test function f:R3→R given by

and let x,y,z be normally distributed independent random variables with mean 0 and variance 1. It is easy to see that

Then it follows that

It is also possible that the variance of the TMC estimator increases compared to standard Monte Carlo, however, we show below that this increase is bounded.

Here we study the dependence of the variance V[ITMCρs(f;N)] on the dimension s. For this purpose, we first give a bound on V[ITMCρs(f;N)]. For 1≤ℓ≤s, let

Then it follows from the decomposition (2) that

resulting in an equality

Using Theorem 2.1, the variance V[ITMCρs(f;N)] is bounded above as follows.

For any ℓ=1,…,s−1, the Cauchy-Schwarz inequality leads to

Applying this bound to the second assertion of Theorem 2.1, we obtain

Using this result, we have

where ≍ indicates that the terms should be of the same order, and so

Thus, the variance of the TMC estimator for a given cost is at most logs times as large as the standard Monte Carlo estimator (up to some constant factor). On the other hand, if there is some decay of the importance of the ANOVA terms as the index of the variable increases, for instance, if the first few terms in α1(f)+⋯+αs(f) dominate the sum, then the ratio (α1(f)+⋯+αs(f))2α21(f)+⋯+α2s(f) can be bounded independently of s, leading to a gain in the efficiency of the TMC estimator. We observe such a behaviour in our numerical experiments below.

Following the idea from Sloan and Woźniakowski (1998), we now introduce the notion of a weighted L2 space. Let (γu)u⊂N be a sequence of the non-negative real numbers called weights. Then the weighted L2 space is defined by

For any subset u with γu=0, we assume that the corresponding ANOVA term fu is 0 and we formally set 0/0=0.

For a randomized algorithm using N function evaluations of f to estimate Iρs(f), which we denote by Alg(f;N), let us consider the minimal cost to estimate Iρs(f) with mean square error ε2 for any f in the unit ball of Fs,γ:

We say that the algorithm Alg is

We refer to Novak and Woźniakowski (2010) for more information on the notion of tractability.

For instance, the standard Monte Carlo estimator IMCρs(f;N) is a strongly polynomially tractable algorithm with ε−1-exponent 2 if

holds. This claim can be proven as follows:

It follows that, in order to have

for any f∈Fs,γ with ∥f∥s,γ≤1, we need N≥ε−2maxu⊆[1:s]γu. Thus the minimal cost is bounded above by

Given the condition (3), we see that N(ε,IMCρs) is bounded independently of the dimension s and the algorithm IMCρs is strongly polynomially tractable with the ε−1-exponent 2.

The TMC estimator is