To Ship or Not to (Function) Ship (Extended version)

Sampling is often used to reduce query latency for interactive big data analytics. The established parallel data processing paradigm relies on function shipping, where a coordinator dispatches queries to worker nodes and then collects the results. The commoditization of high-performance networking makes data shipping possible, where the coordinator directly reads data in the workers' memory using RDMA while workers process other queries. In this work, we explore when to use function shipping or data shipping for interactive query processing with sampling. Whether function shipping or data shipping should be preferred depends on the amount of data transferred, the current CPU utilization, the sampling method and the number of queries executed over the data set. The results show that data shipping is up to 6.5x faster when performing clustered sampling with heavily-utilized workers. 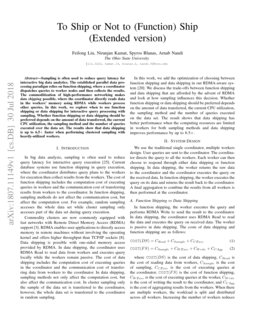 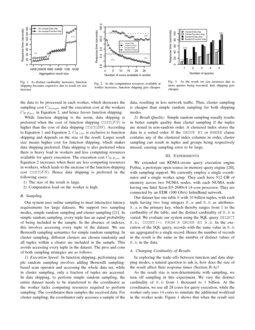 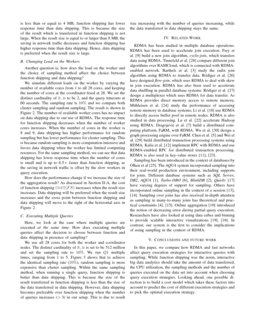 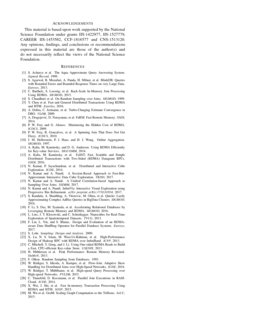 In big data analysis, sampling is often used to reduce query latency for interactive query execution [25]. Current database systems use function shipping in query execution, where the coordinator distributes query plans to the workers for execution then collect results from the workers. The cost of function shipping includes the computation cost of executing queries in workers and the communication cost of transferring results from workers to the coordinator. In function shipping, sampling methods do not affect the communication cost, but affect the computation cost. For example, random sampling accesses the whole data set while cluster sampling only accesses part of the data set during query execution.

Commodity clusters are now commonly equipped with fast networks with Remote Direct Memory Access (RDMA) support [3]. RDMA enables user applications to directly access memory in remote machines without involving the operating kernel and offers higher throughput than TCP/IP sockets [8]. Data shipping is possible with one-sided memory access provided by RDMA. In data shipping, the coordinator uses RDMA Read to read data from workers and executes query locally while the workers remain passive. The cost of data shipping includes the computation cost of executing queries in the coordinator and the communication cost of transferring data from workers to the coordinator. In data shipping, sampling methods not only affect the computation cost, but also affect the communication cost. In cluster sampling only the sample of the data set is transferred to the coordinator, however, the whole data set is transferred to the coordinator in random sampling.

. In simple random sampling, every tuple has an equal probability of being included in the sample. In the absence of indexes, this involves accessing every tuple of the dataset. We use Bernoulli sampling semantics for simple random sampling. In cluster sampling, different clusters are chosen randomly and all tuples within a cluster are included in the sample. This avoids accessing every tuple in the dataset. The pros and cons of both sampling strategies are as follows.

Simple random sampling usually results in better sample quality than cluster sampling if the tuples are stored in non-random order. A clustered index stores the data in a sorted order. If the GROUP BY or WHERE clause contains any of the clustered index columns in order, cluster sampling can result in tuples and groups being respectively missed, causing sampling error to be large.

We extended our RDMA-aware query execution engine Pythia, a prototype open-source in-memory query engine [20], with sampling support. We currently employ a single coordinator and a single worker setup. They each have 512 GB of memory across two NUMA nodes, with each NUMA node having one Intel Xeon E5-2680v4 14-core processor. They are connected by an EDR (100 Gb/s) InfiniBand network.

Our dataset has one table R with 10 billion tuples, with each tuple having two long integers R.a and R.b as attributes. R.a is the primary key, which thereby ranges from 1 to the cardinality of the table, and the distinct cardinality of R.b is varied. We evaluate our system using the SQL query SELECT R.b, COUNT(*) FROM R GROUP BY R.b. In the execution of the SQL query, records with the same value in R.b are aggregated to a single record. Hence the number of records in the result is the same as the number of distinct values of R.b in the data.

In exploring the trade-offs between function and data shipping modes, a natural question to ask is, how does the size of the result affect their response times (Section II-A)?

Iii-B Changing Load on the Workers

Another question is, how does the load on the worker and the choice of sampling method affect the choice between function shipping and data shipping?

, which uses RDMA to deal with skew in join execution. RDMA has also been used to accelerate data shuffling in parallel database systems. Rödiger et al.

Sampling has been introduced in the context of databases by Olken et al [25]. The AQUA system incorporated sampling into their real-world production environment, including supports for joins. Different database systems such as SQL Server, DB2, AQUA [1], Turbo-DBO [6], BlinkDB [2], Quickr [17] have varying degrees of support for sampling. Others have incorporated online sampling in the context of a session [13, 14]. Sampling over joins has also received in-depth attention as sampling in many-to-many joins has theoretical and practical constraints [4, 15]. Online aggregation [10] introduced the notion of decreasing error during partial query execution. Researchers have also looked at using data cubes and binning to provide scalable interactive visualizations [19, 16]. In contrast, our system is the first to consider the implications of using sampling in the context of RDMA.

This material is based upon work supported by the National Science Foundation under grants IIS-1422977, IIS-1527779, CAREER IIS-1453582, CCF-1816577 and CNS-1513120. Any opinions, findings, and conclusions or recommendations expressed in this material are those of the author(s) and do not necessarily reflect the views of the National Science Foundation.