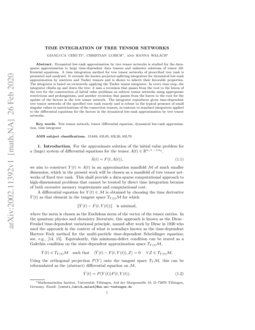 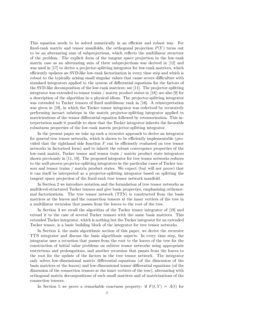 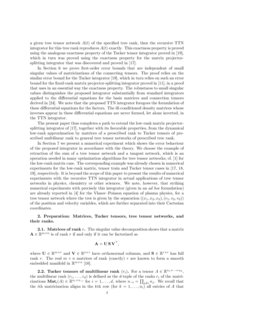 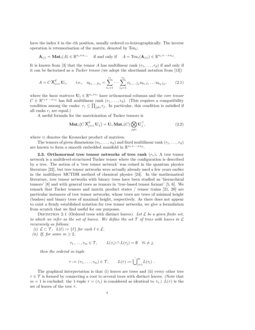 For the approximate solution of the initial value problem for a (huge) system of differential equations for the tensor A(t)∈Rn1×…×nd,

we aim to construct Y(t)≈A(t) in an approximation manifold M of much smaller dimension, which in the present work will be chosen as a manifold of tree tensor networks of fixed tree rank. This shall provide a data-sparse computational approach to high-dimensional problems that cannot be treated by direct time integration because of both excessive memory requirements and computational cost.

where the norm is chosen as the Euclidean norm of the vector of the tensor entries. In the quantum physics and chemistry literature, this approach is known as the Dirac–Frenkel time-dependent variational principle, named after work by Dirac in 1930 who used the approach in the context of what is nowadays known as the time-dependent Hartree–Fock method for the multi-particle time-dependent Schrödinger equation; see, e.g.,

[14, 15]. Equivalently, this minimum-defect condition can be stated as a Galerkin condition on the state-dependent approximation space TY(t)M,

Using the orthogonal projection P(Y) onto the tangent space TYM, this can be reformulated as the (abstract) differential equation on M,

In the present paper we take up such a recursive approach to derive an integrator for general tree tensor networks, which is shown to be efficiently implementable (provided that the righthand side function F can be efficiently evaluated on tree tensor networks in factorized form) and to inherit the robust convergence properties of the low-rank matrix, Tucker tensor and tensor train / matrix product state integrators shown previously in [11, 19]. The proposed integrator for tree tensor networks reduces to the well-proven projector-splitting integrators in the particular cases of Tucker tensors and tensor trains / matrix product states. We expect (but will not prove) that it can itself be interpreted as a projector-splitting integrator based on splitting the tangent space projection of the fixed-rank tree tensor network manifold.

In Section 2 we introduce notation and the formulation of tree tensor networks as multilevel-structured Tucker tensors and give basic properties, emphasizing orthonormal factorizations. The tree tensor network (TTN) is constructed from the basis matrices at the leaves and the connection tensors at the inner vertices of the tree in a multilinear recursion that passes from the leaves to the root of the tree.

, the main algorithmic section of this paper, we derive the recursive TTN integrator and discuss the basic algorithmic aspects. In every time step, the integrator uses a recursion that passes from the root to the leaves of the tree for the construction of initial value problems on subtree tensor networks using appropriate restrictions and prolongations, and another recursion that passes from the leaves to the root for the update of the factors in the tree tensor network. The integrator only solves low-dimensional matrix differential equations (of the dimension of the basis matrices at the leaves) and low-dimensional tensor differential equations (of the dimension of the connection tensors at the inner vertices of the tree), alternating with orthogonal matrix decompositions of such small matrices and of matricizations of the connection tensors.

In Section 6 we prove first-order error bounds that are independent of small singular values of matricizations of the connecting tensors. The proof relies on the similar error bound for the Tucker integrator [19], which in turn relies on such an error bound for the fixed-rank matrix projector-splitting integrator proved in [11], in a proof that uses in an essential way the exactness property. The robustness to small singular values distinguishes the proposed integrator substantially from standard integrators applied to the differential equations for the basis matrices and connection tensors derived in [24]. We note that the proposed TTN integrator foregoes the formulation of these differential equations for the factors. The ill-conditioned density matrices whose inverses appear in these differential equations are never formed, let alone inverted, in the TTN integrator.

The present paper thus completes a path to extend the low-rank matrix projector-splitting integrator of [17], together with its favorable properties, from the dynamical low-rank approximation by matrices of a prescribed rank to Tucker tensors of prescribed multilinear rank to general tree tensor networks of prescribed tree rank.

The singular value decomposition shows that a matrix

where U∈Rm×r and V∈Rn×r have orthonormal columns, and S∈Rr×r has full rank r. The real m×n matrices of rank (exactly) r are known to form a smooth embedded manifold in Rm×n [10].

For a tensor A∈Rn1×⋯×nd, the multilinear rank (r1,…,rd) is defined as the d-tuple of the ranks ri of the matricizations Mati(A)∈Rni×n¬i for i=1,…,d, where n¬i=∏j≠inj. We recall that the ith matricization aligns in the kth row (for k=1,…,ni) all entries of A that have the index k in the ith position, usually ordered co-lexicographically. The inverse operation is retensorisation of the matrix, denoted by Teni:

It is known from [3] that the tensor A has multilinear rank (r1,…,rd) if and only if it can be factorized as a Tucker tensor (we adopt the shorthand notation from [13])

where the basis matrices Ui∈Rni×ri have orthonormal columns and the core tensor C∈Rr1×⋯×rd has full multilinear rank (r1,…,rd). (This requires a compatibility condition among the ranks: ri≤∏j≠irj. In particular, this condition is satisfied if all ranks ri are equal.)

A useful formula for the matricization of Tucker tensors is

where ⊗ denotes the Kronecker product of matrices.

The tensors of given dimensions (n1,…,nd) and fixed multilinear rank (r1,…,rd) are known to form a smooth embedded manifold in Rn1×⋯×nd.

[Ordered trees with distinct leaves] Let L be a given finite set, to which we refer as the set of leaves. We define the set T of trees with leaves in L recursively as follows:

The graphical interpretation is that (i) leaves are trees and (ii) every other tree τ∈T is formed by connecting a root to several trees with distinct leaves. (Note that m=1 is excluded: the 1-tuple τ=(τ1) is considered as identical to τ1.) L(τ) is the set of leaves of the tree τ.

In the graphical interpretation, the subtrees are in a bijective correspondence with the vertices of the tree, by assigning to each subtree its root; see Figure 2.1.

On the set of trees T we define a partial ordering by writing, for σ,τ∈T,

On a given tree ¯τ∈T, we work with the following set of data:

This can be interpreted as associating a tensor to the root of each subtree. In this way every vertex of the given tree carries either a matrix — if it is a leaf — or else a tensor whose order equals the number of edges leaving the vertex.

With these data, a tree tensor network (TTN) is constructed in a recurrence relation that passes from the leaves to the root of the tree.

We note that the expression on the righthand side of the definition of Xτ can be viewed as an rτ-tuple of m-tensors with the same basis matrices Uτi but different core tensors Cτ(k,:)∈Rnτ1×⋯×nτm for k=1,…,rτ. The vectorizations of these rτ m-tensors, which are of dimension nτ, form the columns of the matrix Uτ. The index 0 in ×0 and Mat0 refers to the mode of dimension rτ of Xτ∈Rrτ×nτ1×⋯×nτm, which we count as mode 0.

It is favorable to work with orthonormal matrices, so that each tensor Xτ is in the Tucker tensor format.

The following is a key lemma.

We have, by the definition of Uτ and Xτ and the unfolding formula (4),

which proves the result.

A further consequence of Lemma 2.3

is that every tree tensor network has an orthonormal representation. This is shown using a QR decomposition of non-orthonormal matrices

Mat0(Cτi)⊤ and including the non-orthonormal factor in the tensor Cτ of the parent tree τ=(τ1,…,τm). It is of full tree rank (rτ) if all these matrices are of full rank.

We rely on the following property, which we can be proved as in [23], where binary trees are considered (this corresponds to the case m=2 above); see also [5].

Let Mr be the manifold of Tucker Tensors with fixed multi-linear rank r=(r1,…,rd). Let us consider an approximation Y0∈Mr to the initial data A0,

The nested Tucker integrator is a numerical procedure that gives, after (d+1) substeps, an approximation in Tucker tensor format, Y1∈Mr, to the full solution A(t1) after a time step t1=t0+h. The procedure is repeated over further time steps to yield approximations Yn∈Mr to A(tn). At each substep of the algorithm, only one factor of the Tucker representation is updated while the others, with the exception of the core tensor, remain fixed. The essential structure of the algorithm can be summarized in the following algorithmic scheme.

The update process in the Tucker integrator is the most intensive and technical part of the algorithm. In order to reduce the complexity of the explanation we introduce the subflows Φ(i) and Ψ, corresponding to the update of the basis matrices and of the core tensor, respectively. We set r¬i=∏j≠iri.

The remaining subflow Ψ describes the final update process of the core.

Finally, the result of the Tucker tensor integrator after one time step can be expressed in a compact way as

We refer the reader to [19] for a detailed derivation and major properties of this Tucker tensor integrator.

The efficiency of the implementation of this algorithm depends on the possibility to evaluate the functions Fi without explicitly forming the large slim matrix V0i∈Rn¬i×ri and the tensor Teni(Ki(t)V0,⊤i)∈Rn1×⋯×nd. This is the case if F(t,C\large\sf Xdj=1Uj) is a linear combination of Tucker tensors of moderate rank whose factors can be computed directly from the factors C and Uj without actually computing the entries of the Tucker tensor.

We consider the case of a (1+d)-dimensional Tucker tensor where the first basis matrix in the decomposition of the initial data is the identity matrix of dimension r×r,

as appears in the recursive construction of orthonormal tree tensor networks. This can be viewed as a collection of r Tucker tensors in Rn1×⋯×nd with the same basis matrices U0i. Recalling (5), the action of the Tucker integrator after one time step can be represented as

In the first step of the subflow Φ(0), we matricize the core tensor C0 in the zero mode and we perform a QR decomposition,

The next step consists of solving the differential equation

and we compute the corresponding QR decomposition,

To conclude, we solve the differential equation

We now observe that due to the presence of the negative sign, the solution of the equation can be directly computed, i.e.

During the update process the structure of the initial data is preserved and we can now introduce the extended Tucker integrator as follows.

We now come to the central algorithmic section of this paper. We derive an integrator for orthonormal tree tensor networks, which updates the orthonormal-basis matrices of the leaves and the orthonormality-constrained core tensors of the other vertices of the tree by a recursive TTN integrator.

In the following, we associate to each subtree τ of the given tree ¯τ a tensor-valued function Fτ:[0,t∗]×Vτ→Vτ. Its actual recursive construction, starting from the root with F¯τ=F and passing to the leaves, will be given in the next subsection.

Consider a tree τ=(τ1,…,τm) and an extended Tucker tensor Y0τ associated to the tree τ,

We have two cases:

This leads to the definition of the recursive tree tensor network (TTN) integrator. It has the same general structure as the extended Tucker integrator.

The subflow Ψτ is the same as for the Tucker integrator, for the function Fτ instead of F.