It is a well-known fact that adding noise to the input data often improves network performance. While the dropout technique may be a cause of memory loss, when it is applied to recurrent connections, Tikhonov regularization, which can be regarded as the training with additive noise, avoids this issue naturally, though it implies regularizer derivation for different architectures. In case of feedforward neural networks this is straightforward, while for networks with recurrent connections and complicated layers it leads to some difficulties. In this paper, a Tikhonov regularizer is derived for Long-Short Term Memory (LSTM) networks. Although it is independent of time for simplicity, it considers interaction between weights of the LSTM unit, which in theory makes it possible to regularize the unit with complicated dependences by using only one parameter that measures the input data perturbation. The regularizer that is proposed in this paper has three parameters: one to control the regularization process, and other two to maintain computation stability while the network is being trained. The theory developed in this paper can be applied to get such regularizers for different recurrent neural networks with Hadamard products and Lipschitz continuous functions. 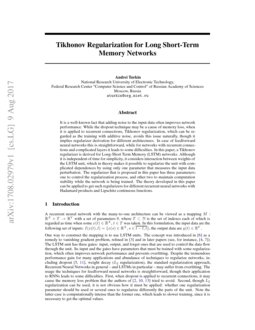 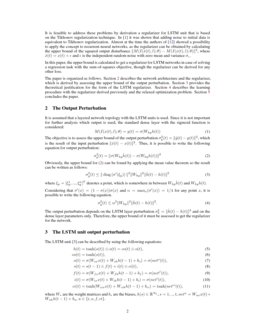 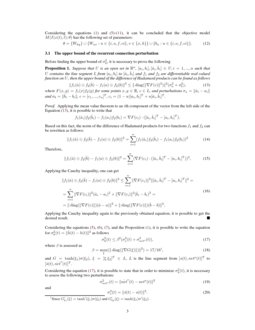 A recurrent neural network with the many-to-one architecture can be viewed as a mapping M:RX×T→RY with a set of parameters θ, where T⊂N is the set of indexes each of which is regarded as time when some x(t)∈RX, t∈T was taken. In this formulation, the input data are the following set of inputs: I(x(t),l)={x(s)∈RX,s∈¯¯¯¯¯¯¯¯¯¯¯¯¯¯¯t−l,t}, the output data are y(t)∈RY.

One way to construct the mapping is to use LSTM units. The concept was introduced in Hochreiter1997LongMemory

as a remedy to vanishing gradient problem, refined in

Gers2000a and in later papers (see, for instance, Graves2005FramewiseArchitectures ; Jozefowicz2015AnArchitectures ). The LSTM unit has three gates: input, output, and forget ones that are used to control the data flow through the unit. Its input and the gates have parameters that must be trained with some regularization, which often improves network performance and prevents overfitting. Despite the tremendous performance gain for many applications and abundance of techniques to regularize networks, including dropout Hinton2012 ; Srivastava2014 , weight decay (L2 regularization), the standard regularization approach, Recurrent Neural Networks in general – and LSTMs in particular – may suffer from overfitting. The usage the techniques for feedforward neural networks is straightforward, though their application to RNNs leads to some difficulties. First, when dropout is applied to recurrent connections, it may cause the memory loss problem that the authors of Gal2016 ; Semeniuta2016 ; Zaremba2014 tried to avoid. Second, though L2 regularization can be used, it is not obvious how it must be applied: whether one regularization parameter should be used or several ones to regularize differently the parts of the unit. Note the latter case is computationally intense than the former one, which leads to slower training, since it is necessary to get the optimal values.

It is feasible to address these problems by derivation a regularizer for LSTM unit that is based on the Tikhonov regularization technique. In Bishop1995TrainingRegularization it was shown that adding noise to initial data is equivalent to Tikhonov regularization. Almost at the time the authors of Wu1996ANetworks showed a possibility to apply the concept to recurrent neural networks, as the regularizer can be obtained by calculating the upper bound of the squared output disturbance ∥M(I(^x(t),l);θ)−M(I(x(t),l);θ)∥2, where ^x(t)=x(t)+ϵ and ϵ

is the independent random noise with zero mean and variance

In this paper, the upper bound is calculated to get a regularizer for LSTM networks in case of solving a regression task with the sum-of-squares objective, though the regularizer can be derived for any other loss.

The paper is organized as follows. Section 2 describes the network architecture and the regularizer, which is derived by assessing the upper bound of the output perturbation. Section 3 provides the theoretical justification for the form of the LSTM regularizer. Section 4 describes the learning procedure with the regularizer derived previously and the relaxed optimization problem. Section 5 concludes the paper.

It is assumed that a layered network topology with the LSTM units is used. Since it is not important for further analysis which output is used, the standard dense layer with the sigmoid function is considered:

Obviously, the upper bound for (2) can be found by applying the mean value theorem so the result can be written as follows:

The output perturbation depends on the LSTM layer perturbation σ2h=∥^h(t)−h(t)∥2 and on the dense layer parameters only. Therefore, the upper bound of it must be assessed to get the regularizer for the network.

The LSTM unit Gers2000a can be described by using the following equations:

Considering the equations (1) and (5)-(11), it can be concluded that the objective model M(I(x(t),l);θ) has the following set of parameters:

3.1 The upper bound of the recurrent connection perturbation

Before finding the upper bound of σ2h, it is necessary to prove the following

Suppose that U is an open set in Rn, [ai,bi],[^ai,^bi]∈U,i=1,...,n such that U contains the line segment L from [ai,bi] to [^ai,^bi] and f1 and f2 are differentiable real-valued function on U, then the upper bound of the difference of Hadamard products can be found as follows

Applying the mean value theorem to an i

Based on this fact, the norm of the difference of Hadamard products for two functions f1 and f2 can be rewritten as follows:

Applying the Cauchy inequality, one can get

Applying the Cauchy inequality again to the previously obtained equation, it is possible to get the desired result. ∎

where β is assessed as

Considering the equation (17), it is possible to state that in order to minimize σ2h(t), it is necessary to assess the following two perturbations:

3.2 The upper bound of the output gate perturbation

Considering the equation (7) and the following fact

one can write the following dynamic function for some τ→0 Wu1996ANetworks :

then its derivative can be estimated as follows

Therefore, considering that δneto(t)=^neto(t)−neto(t) and τ>0, it is possible to get the following equation for its derivative:

Second, the upper bound of B is

Thus, after some simplifications the upper bound of (24) can be written as

Let us assume that the input perturbation σx(t) and the memory perturbation σs(t) are either constants or change more slowly than σneto(t). Thus, the equation (30) can be rewritten as follows

Substituting the previously defined constants, we can end up with the upper bound of σneto(t):

which proves the proposition. ∎

It should be noted that for the purpose of computational stability it is assumed that β∥Woh∥≤1.

3.3 The upper bound of the memory perturbation

Therefore, the memory perturbation can be assessed by finding the upper bound of the following norm

Considering the equation (37), it is possible to write the following

Like in the proposition 2, it is possible to write the following equation for the derivative for σ2s(t):

First, it is necessary to rewrite the second part of the equation by using the following one:

Applying the mean value theorem, we can find an upper bound of the first part of the equation as follows:

Applying Proposition 1, the upper bound of the second part squared can be assessed as

By applying a previously used inequality (√a1+a2≤√a1+√a2), it is possible to write that

Therefore, the upper bound of (39) is

Applying Lemma 2 from Pachpatte1996 , the upper bound of dσs(t)dt can be calculated as follows

Assuming that σx(t) and σh(t) are either constants or change more slowly than σs(t), one can get the following result for the interval [t−τ,t]:

which proves the proposition ∎

3.4 The upper bound of the output perturbation

Based on Proposition 3, it is possible to rewrite equation (17) as follows:

where ρx and ρh are independent of the time variable t and can be calculated based on the parameters of the model only:

After some simplifications, it is possible to conclude that

Considering (54) and the upper bound of the output perturbation:

the regularizer R(θ) can be written as follows

where λS is a constant that measures the degree of the input perturbation.

It is possible to relax this problem to get the following objective function:

where (u)+=max(0,u) and λS, λ1, and λ2 are the parameters that must be assessed during the training procedure based on the model evaluation criterion.

The complex regularizer that is the right part of (57) has three parameters: λS=λS(σϵ), which is the main parameter of the regularization, and λ1, λ2, which are used to maintain computation stability during the training.

In this paper, the Tikhonov regularizer is derived for the LSTM unit by finding the upper bound of the output perturbation, which is the difference between the actual output of the network and the one that is observed if the noise is added to the inputs of the network. The regularizer has three parameters: the first one measures the degree of input perturbation, thus it controls the regularization process, the other two are used to maintain computation stability of the regularization. The regularizer can be used to approach the overfitting problem in LSTM networks by taking into account not only the weights of the gates independently, but also the interaction between them as parts of the LSTM complex structure. The mathematical justification of the proposed regularization derivation is provided, which enables to get regularizers for different architectures.