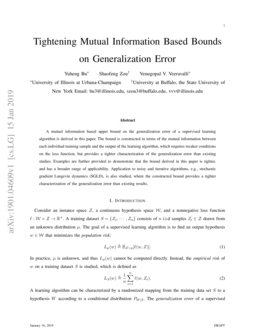 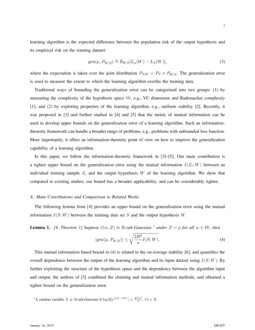 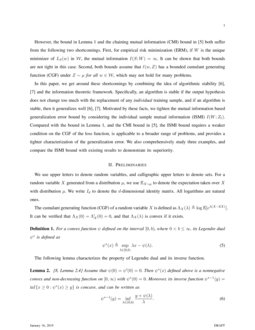 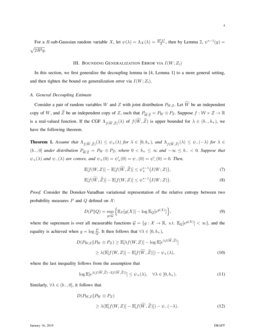 Sharpened Generalization Bounds based on Conditional Mutual Information and an Application to Noisy, Iterative Algorithms

The information-theoretic framework of Russo and J. Zou (2016) and Xu an...
Mahdi Haghifam, et al. ∙

An additive noise channel is considered, in which the distribution of th...
Nir Weinberger, et al. ∙

We study the mutual information between (certain summaries of) the outpu...
Mahdi Haghifam, et al. ∙

Consider an instance space Z, a continuous hypothesis space W, and a nonnegative loss function ℓ:W×Z→R+. A training dataset S={Z1,⋯,Zn} consists of n i.i.d samples Zi∈Z drawn from an unknown distribution μ. The goal of a supervised learning algorithm is to find an output hypothesis w∈W that minimizes the population risk:

In practice, μ is unknown, and thus Lμ(w) cannot be computed directly. Instead, the empirical risk of w on a training dataset S is studied, which is defined as

where the expectation is taken over the joint distribution

PS,W=PS⊗PW|S. The generalization error is used to measure the extent to which the learning algorithm overfits the training data.

In this paper, we follow the information-theoretic framework in [3, 4, 5]. Our main contribution is a tighter upper bound on the generalization error using the mutual information I(Zi;W) between an individual training sample Zi and the output hypothesis W of the learning algorithm. We show that compared to existing studies, our bound has a broader applicability, and can be considerably tighter.

The following lemma from [4] provides an upper bound on the generalization error using the mutual information I(S;W) between the training data set S and the output hypothesis W.

This mutual information based bound in (4) is related to the on-average stability [6], and quantifies the overall dependence between the output of the learning algorithm and its input dataset using I(S;W). By further exploiting the structure of the hypothesis space and the dependency between the algorithm input and output, the authors of [5] combined the chaining and mutual information methods, and obtained a tighter bound on the generalization error.

However, the bound in Lemma 1 and the chaining mutual information (CMI) bound in [5] both suffer from the following two shortcomings. First, for empirical risk minimization (ERM), if W is the unique minimizer of LS(w) in W, the mutual information I(S;W)=∞. It can be shown that both bounds are not tight in this case. Second, both bounds assume that ℓ(w,Z) has a bounded cumulant generating function (CGF) under Z∼μ for all w∈W, which may not hold for many problems.

In this paper, we get around these shortcomings by combining the idea of algorithmic stability [6, 7] and the information theoretic framework. Specifically, an algorithm is stable if the output hypothesis does not change too much with the replacement of any individual training sample, and if an algorithm is stable, then it generalizes well [6, 7]. Motivated by these facts, we tighten the mutual information based generalization error bound by considering the individual sample mutual information (ISMI) I(W;Zi). Compared with the bound in Lemma 1, and the CMI bound in [5], the ISMI bound requires a weaker condition on the CGF of the loss function, is applicable to a broader range of problems, and provides a tighter characterization of the generalization error. We also comprehensively study three examples, and compare the ISMI bound with existing results to demonstrate its superiority.

-dimensional identity matrix. All logarithms are natural ones.

The cumulant generating function (CGF) of a random variable X is defined as ΛX(λ)≜logE[eλ(X−EX)]. It can be verified that ΛX(0)=Λ′X(0)=0, and that ΛX(λ) is convex if it exists.

For a convex function ψ defined on the interval [0,b), where 0<b≤∞, its Legendre dual ψ∗ is defined as

The following lemma characterizes the property of Legendre dual and its inverse function.

In this section, we first generalize the decoupling lemma in [4, Lemma 1] to a more general setting, and then tighten the bound on generalization error via I(W;Zi).

P and Q defined on X:

where the supremum is over all measurable functions G={g:X→R, s.t. EQ[eg(X)]<∞}, and the equality is achieved when g=logPQ. It then follows that ∀λ∈[0,b+),

where the last inequality follows from the assumption that

where the equalities in (III-A) and (III-A) follow from Lemma 2. ∎

provides a more general characterization of the decoupling estimate than existing results. Specifically, it is assumed that the CGF of

Motivated by the idea of algorithmic stability, which measures how much an output hypothesis changes with the replacement of an individual training sample, we construct an upper bound on the generalization error via I(W;Zi).

The generalization error can be written as follows:

where W and Zi in the second term are dependent with PW,Zi=μ⊗PW|Zi, and W and ˜Z in the first term are independent with the same marginal distributions. Applying Theorem 1 completes the proof. ∎

The following Proposition shows that the ISMI bound is always tighter than the bound in Lemma 1.

For the second part, by the chain rule of mutual information,

where Zj={Z1,⋯,Zj}, and the last step follows by the fact that Zi and Zi−1 are independent. Applying Jensen’s inequality completes the proof. ∎

In this section, we consider two examples with infinite I(W;S). We show that for these two examples, the upper bound on generalization error in Lemma 1 blows up, whereas the ISMI bound in Theorem 2 still provides an accurate approximation.

The bound in Lemma 1 is not applicable here due to the following two reasons: (1) W is a deterministic function of S, and hence I(S;W)=∞; and (2) since Z is a Gaussian random vector, the loss function ℓ(w,Z)=∥w−Z∥22

is not sub-Gaussian. Specifically, the variance of the loss function

Both of these issues can be solved by applying the ISMI bound in Theorem 2. Since W∼N(μ,σ2Idn), the mutual information between each individual sample and the output hypothesis I(W;Zi) can be computed exactly as follows:

denotes the chi-squared distribution with

Since W is the ERM solution, it follows that gen(μ,PW|S)≥0. We only need to consider the case λ<0. It can be shown that

As n→∞, the above bound is O(1√n), which is usually the case when one applies bounding techniques based on the VC dimension [1], and algorithmic stability [2].

In this subsection, we revisit the example studied in [5]. Let W={w∈R2:∥w∥2=1}, and Z∼N(0,I2) be a standard normal random vector in R2. The loss function is defined to be the following Gaussian process indexed by w:

Note that the loss function ℓ(w,Z) is sub-Gaussian with parameter R=1 for all w∈W. In addition, the output hypothesis w∈W can also be represented equivalently using the phase of w. In other words, we can let ϕ be the unique number in [0,2π) such that w=(sinϕ,cosϕ). For this problem, the empirical risk of a hypothesis w∈W is given by LS(w)=−1n∑ni=1⟨w,Zi⟩.

We consider two learning algorithms which are the same as the ones in [5]. The first is the ERM algorithm:

The second is the ERM algorithm with additive noise:

For this example, the generalization error of W can be computed exactly as follows:

where the last step is due to the fact that the distribution of ∥1n∑ni=1Zi∥2 is Rayleigh(1n). For the second algorithm W′, since the noise ξ is independent from S, it follows that

The bound via I(W;S) in Lemma 1 is not applicable, since W is deterministic given S and I(W;S)=∞. Moreover, for the second algorithm W′,

Applying the ISMI bound in Theorem 2 to the ERM algorithm W, we have that

Note that given Zi=zi, the ERM solution

which depends on the other samples Zj, j≠i. Moreover, it can be shown that PW|Zi=zi is equivalent to the phase distribution of a Gaussian random variable N(zin,n−1n2I2) in polar coordinates. Due to symmetry, we can always rotate the polar coordinates, such that zi=(r,0), where r∈R+ is the Euclidian norm of zi. Then, PW|Zi=zi is a function of r, and can be equivalently characterized by

Zi has a Rayleigh distribution with unit variance, it then follows that

Similarly, we can compute the ISMI bound for W′.

Numerical comparisons are presented in Fig. 2 and Fig. 2. In both figures, we plot the ISMI bound, the CMI bound in [5], and the true values of the generalization error, as functions of the number of samples n. In Fig. 2, we compare these bounds for the ERM solution W. Note that the CMI bound reduces to the classical chaining bound in this case. In Fig. 2, we evaluate these bounds for the noisy algorithm W′ with ϵ=0.05. Both figures demonstrate that the ISMI bound is closer to the true values of the generalization error, and outperforms the CMI bound significantly.

In this section, we apply the ISMI bound in Theorem 2 to a class of noisy, iterative algorithms, specifically, stochastic gradient Langevin dynamics (SGLD).

Denote the parameter vector at iteration t by W(t)∈Rd, and let W(0)∈W denote an arbitrary initialization. At each iteration t≥1, we sample a training data point ZU(t)∈S, where U(t)∈{1,...,n} denotes the random index of the sample selected at iteration t, and compute the gradient ∇ℓ(W(t−1),ZU(t)). We then scale the gradient by a step size η(t) and perturb it by isotropic Gaussian noise ξ∼N(0,Id). The overall updating rule is as follows [10]:

where σ(t) controls the variance of the Gaussian noise.

In the following, we use the same assumptions as in [11].

In [11], the following bound was obtained by upper bounding I(W;S) in Lemma 1.

[11, Corollary 1] The generalization error of the SGLD algorithm is bounded by

To apply the ISMI bound for SGLD, we modify the result in Theorem 2 by conditioning the random sample path U(T),

where U denotes the set of all possible sample paths.

Let Ti(u(T)) denote the set of iterations for which samples Zi is selected for a given sample path u(T). Using the chain rule of mutual information, we have

where the last step follows from Assumption 2 and the fact that ξ is an independent Gaussian noise as in [11].

Combining with (V-B), it follows that

where we remove the log term by using log(1+x)≤x.

where (a) follows from the sampling scheme that all samples are used exactly once in each epoch; (b) is due to the fact that ∑Kk=11k≤log(K)+1; and (c) follows by computing the integral ∫10√1x+1+log(K−1)dx.

it can be seen that our bound is tighter by a factor of √logn.