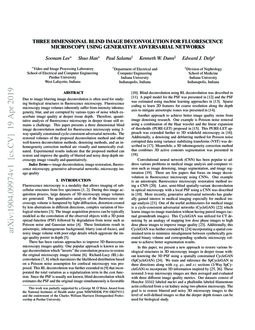 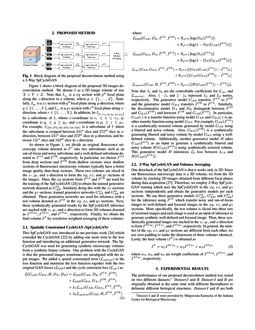 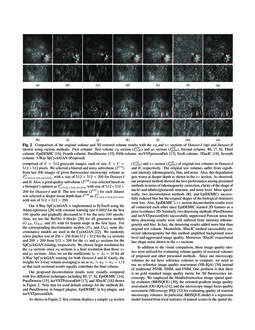 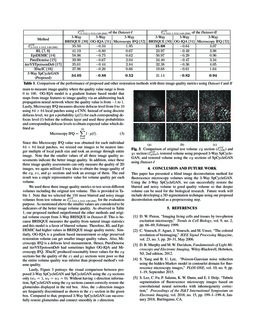 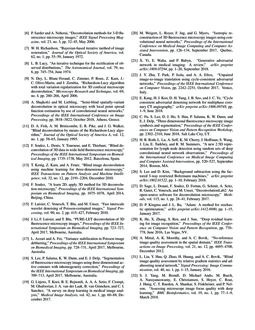 Robust and accurate nuclei centroid detection is important for the under...
Liming Wu, et al. ∙

Fluorescence microscopy is a modality that allows imaging of subcellular structures from live specimens [1, 2]. During this image acquisition process, large datasets of 3D microscopy image volumes are generated. The quantitative analysis of the fluorescence microscopy volume is hampered by light diffraction, distortion created by lens aberrations in different directions, complex variation of biological structures [3]. The image acquisition process can be typically modeled as the convolution of the observed objects with a 3D point spread function (PSF) followed by degradation from noise such as Poisson noise and Gaussian noise [4]. These limitations result in anisotropic, inhomogeneous background, blurry (out-of-focus), and noisy image volume with poor edge details which aggravate the image quality poorer in depth [5].

that incorporated the total variation as a regularization term in the cost function. Since the PSF is usually not known, blind deconvolution which estimates the PSF and the original image simultaneously is favorable

and the PSF was estimated using machine learning approaches in

[13]. Sparse coding to learn 2D features for coarse resolution along the depth axis to mitigate anisotropic issues was presented in [14].

Another approach to achieve better image quality stems from image denoising research. One example is Poisson noise removal using a combination of the Haar wavelet and the linear expansion of thresholds (PURE-LET) proposed in [15]. This PURE-LET approach was extended further to 3D widefield microscopy in [16]

Convolutional neural network (CNN) has been popular to address various problems in medical image analysis and computer vision such as image denoising, image segmentation, and image registration [19]. There are few papers that focus on image deconvolution in fluorescence microscopy using CNNs. One example is an anisotropic fluorescence microscopy restoration method using a CNN [20]. Later, semi-blind spatially-variant deconvolution in optical microscopy with a local PSF using a CNN was described in [10]. More recently, generative adversarial networks has gradually gained interest in medical imaging especially for medical image analysis [21]. One of the useful architectures for medical image is a cycle-consistent adversarial networks (CycleGAN) [22]

In this paper, we present a new approach to restore various biological structures in 3D microscopy images in deeper tissue without knowing the 3D PSF using a spatially constrained CycleGAN (SpCycleGAN) [24]. We train and inference the SpCycleGAN in three directions along with xy, yz, and xz sections (3-Way SpCycleGAN) to incorporate 3D information inspired by [25, 26]. These restored 3-way microscopy images are then averaged and evaluated with three different image quality metrics. Our datasets consist of Hoechst 33342 labeled nuclei and a phalloidin labeled filamentous actin collected from a rat kidney using two-photon microscopy. The goal is to restore blurred and noisy 3D microscopy images to the level of well-defined images so that the deeper depth tissues can be used for biological study.

As shown in Figure 1, we divide an original florescence microscopy volume denoted as IO into two subvolumes such as an out-of-focus and noisy subvolume and a well-defined subvolume denoted as IOA and IOB, respectively. In particular, we choose IOA from deep sections and IOB from shallow sections since shallow sections of fluorescence microscopy volumes typically have a better image quality than deep sections. These two volumes are sliced in the z-, y-, and x-direction to form the xy, xz, and yz sections of the images. Then, the xy sections from IOA and IOB are used for the training of the SpCycleGAN [24] to obtain the trained generative network denoted as GxyAB. Similarly doing this with the xz sections and the yz sections, trained generative networks GxzAB and GyzAB are obtained. These generative networks are used for inference with a test volume denoted as IOT in the xy, xz, and yz sections. Next, these synthetically generated results by the SpCycleGAN inference are stacked with z-, y-, and x-direction to form 3D volumes denoted as ISTxy, ISTxz, and ISTyz, respectively. Finally, we obtain the final volume IF by voxelwise weighted averaging of these volumes.

by adding one more term to the loss function and introducing an additional generative network. The SpCycleGAN was used for generating synthetic microscopy volumes from a synthetic binary volume. One problem with the CycleGAN is that the generated images sometimes are misaligned with the input images. We added a spatial constrained term (

One drawback of the SpCycleGAN is that it works only in 2D. Since our fluorescence microscopy data is a 3D volume, we form the 3D volume by stacking 2D images obtained from different focal planes during data acquisition [27]. Therefore, we employ 3-Way SpCycleGAN training which uses the SpCycleGAN in the xy, xz, and yz sections independently and obtain the generative models per each sections. We use three generative models (GxyAB, GxzAB, and GyzAB) for the inference using IOT which transfer noisy and out-of-focus images to well-defined and focused images in the xy, xz, and yz sections. More specifically, the test volume is sliced into three sets of sectional images and each image is used as an input of inference to generate synthetic well-defined and focused image. Then, these synthetically generated images are stacked in the z-, y-, and x-direction to form ISTxy, ISTxz, and ISTyz, respectively. In general, the number of the xy, xz, and yz

sections are different from each other, we use zero padding to make the dimension of three volumes identical. Lastly, the final volume (

IF) is obtained as

-Way SpCycleGAN is implemented in PyTorch using the Adam optimizer

[28] with constant learning rate 0.0002 for the first 100epochs and gradually decreased to 0 for the next 100 epochs. Also, we use the ResNet 9 blocks [29] for all generative models (GAB, GBA, and H) with 64 feature maps at the first layer. For the corresponding discriminative models (DA and DB), same discriminative models are used in the CycleGAN [22]. We randomly select patches size of 256×256 from 512×512 for the xy sections and 200×200 from 512×200 for the xz and yz sections for the SpCycleGAN training, respectively. We choose larger resolution for the xy sections since xy sections is a finer resolution than those xz and yz sections. Also, we set the coefficients λ1=λ2=10 for all 3-Way SpCycleGAN training for both Dataset-I and II. Lastly, the weights for 3-way volume averaging is set as w1=w2=w3=1/3 so that each sectional results equally contribute the final volume.

Our proposed deconvolution results were visually compared with five different techniques including RL [7, 8], EpiDEMIC [14], PureDenoise [15], iterVSTPoissonDeb [17], and 3DacIC [18] shown in Figure 2. Note that we used default settings for the methods RL and PureDenoise in ImageJ plugins, EpiDEMIC in Icy plugin, and iterVSTpoissonDeb.

As shown in Figure 2, first column displays a sample xy section (IOTz126) and xz section (IOTy256) of original test volumes in Dataset-I and II, respectively. The original test volumes suffer from significant intensity inhomogeneity, blur, and noise. Also, this degradation gets worse at deeper depth as shown in the xz section. As observed, our proposed method showed the best performance among presented methods in terms of inhomogeneity correction, clarity of the shape of nuclei and tubules/glomeruli structure, and noise level. More specifically, two deconvolution methods (RL and EpiDEMIC) successfully reduced blur but the original shapes of the biological structures were lost. Also, EpiDEMIC’s xz section deconvolution results were all connected each other since EpiDEMIC learned 2D features as a prior to enhance 3D. Similarly, two denoising methods (PureDenoise and iterVSTpoissonDeb) successfully suppressed Poisson noise but these denoising results were still suffered from intensity inhomogeneity and blur. In fact, the denoising results added more blur than original test volume. Meanwhile, 3DacIC method successfully corrected inhomogeneity but this method amplified background noise level and aggravated image quality. Moreover, 3DacIC exacerbated line shape noise shown in the xz sections.

In addition to the visual comparison, three image quality metrics were utilized for evaluating volume quality of restored volumes of proposed and other presented methods. Since our microscopy volumes do not have reference volumes to compare, we need to use no reference image quality assessment (NR-IQA) [30] instead of traditional PSNR, SSIM, and FSIM. One problem is that there is no gold standard image quality metric for 3D fluorescence microscopy. We employed the blind/referenceless image spatial quality evaluator (BRISQUE) [30], the oriented-gradient image quality assessment (OG-IQA) [31], and the microscopy image focus quality assessment (Microscopy IFQ) [32] for evaluating quality of restored microscopy volumes. In particular, BRISQUE model is a regression model learned from local statistics of natural scenes in the spatial domain to measure image quality where the quality value range is from 0 to 100. OG-IQA model is a gradient feature based model that maps from image features to image quality via an adaboosting back propagation neural network where the quality value is from −1 to 1. Lastly, Microscopy IFQ measures discrete defocus level from 0 to 10 using 84×84

local patches using a CNN. Instead of using discrete defocus level, we got a probability (

We used these three image quality metrics to test seven different volumes including the original test volume. This is provided in Table 1. Note that we selected the 150 most blurred and noisy image volumes from test volume as IOT(1:512,1:512,149:298) for the evaluation purpose. As mentioned above the smaller values are considered to be indicators of the better image volume quality. As observed in Table 1, our proposed method outperformed the other methods and original volume except from 3-Way BRISQUE in Dataset-II. This is because BRISQUE measures the quality from natural image statistics and this model is a favor of blurred volume. Therefore, RL and EpiDEMIC had higher values in BRISQUE image quality metric. Similarly, OG-IQA is a gradient based measurement so edge preserved restoration volume can get smaller image quality values. Also, Microscopy IFQ is a defocus level measurement. Hence, PureDenoise and iterVSTpoissonDeb had sometimes higher OG-IQA and Microscopy IFQ. 3DacIC produced reasonably lower values for the xy sections but the quality of the xz and yz sections were poor so that the entire volume quality was inferior than proposed method’s volume quality.

This paper has presented a blind image deconvolution method for fluorescence microscopy volumes using the 3-Way SpCycleGAN. Using the 3-Way SpCycleGAN, we can successfully restore the blurred and noisy volume to good quality volume so that deeper volume can be used for the biological research. Future work will include developing a 3D segmentation technique using our proposed deconvolution method as a preprocessing step.