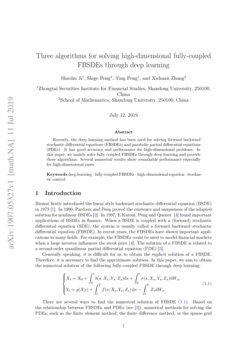 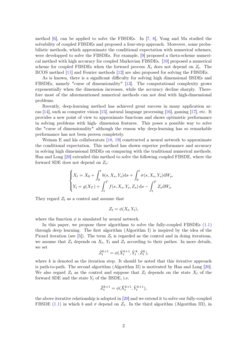 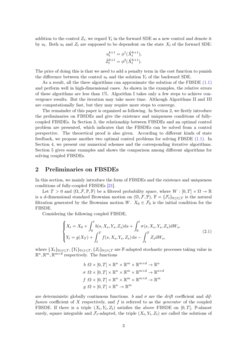 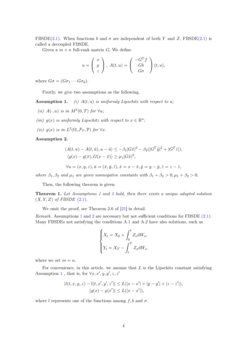 Generally speaking, it is difficult for us to obtain the explicit solution of a FBSDE. Therefore, it is necessary to find the approximate solution. In this paper, we aim to obtain the numerical solution of the following fully-coupled FBSDE through deep learning:

There are several ways to find the numerical solution of FBSDE (1.1). Based on the relationship between FBSDEs and PDEs (see [5]), numerical methods for solving the PDEs, such as the finite element method, the finite difference method, or the sparse grid method [6], can be applied to solve the FBSDEs. In [7, 8], Yong and Ma studied the solvability of coupled FBSDEs and proposed a four-step approach. Moreover, some probabilistic methods, which approximate the conditional expectation with numerical schemes, were developped to solve the FBSDEs. For example, [9] proposed a theta-scheme numerical method with high accuracy for coupled Markovian FBSDEs. [10] proposed a numerical scheme for coupled FBSDEs when the forward process Xt does not depend on Zt. The BCOS method [11] and Fourier methods [12] are also proposed for solving the FBSDEs.

As is known, there is a significant difficulty for solving high dimensional BSDEs and FBSDEs, namely "curse of dimensionality"

[13]. The computational complexity grows exponentially when the dimension increases, while the accuracy decline sharply. Therefore most of the aforementioned numerical methods can not deal with high-dimensional problems.

, such as computer vision

[16], gaming [17], etc. It provides a new point of view to approximate functions and shows optimistic performance in solving problems with high- dimension features. This poses a possible way to solve the "curse of dimensionality" although the reason why deep-learning has so remarkable performance has not been proven completely.

constructed a neural network to approximate the conditional expectation. This method has shown superior performance and accuracy in solving high dimensional BSDEs on comparing with the traditional numerical methods. Han and Long

[20] extended this method to solve the following coupled FBSDE, where the forward SDE does not depend on Zt:

They regard Zt as a control and assume that

where the function ϕ is simulated by neural network.

In this paper, we propose three algorithms to solve the fully-coupled FBSDEs (1.1) through deep learning. The first algorithm (Algorithm 1) is inspired by the idea of the Picard iteration (see [5]). The term Zt is regarded as the control and in doing iterations, we assume that Zt depends on Xt, Yt and Zt according to their pathes. In more details, we set

where k is denoted as the iteration step. It should be noted that this iterative approach is path-to-path. The second algorithm (Algorithm 2) is motivated by Han and Long [20]. We also regard Zt as the control and suppose that Zt depends on the state Xt of the forward SDE and the state Yt of the BSDE, i.e.

the above iterative relationship is adopted in [20] and we extend it to solve our fully-coupled FBSDE (1.1) in which b and σ depend on Zt. In the third algorithm (Algorithm 3), in addition to the control Zt, we regard Yt in the forward SDE as a new control and denote it by ut. Both ut and Zt are supposed to be dependent on the state Xt of the forward SDE:

The price of doing this is that we need to add a penalty term in the cost function to punish the difference between the control ut and the solution Yt of the backward SDE.

As a result, all the three algorithms can approximate the solution of the FBSDE (1.1) and perform well in high-dimensional cases. As shown in the examples, the relative errors of these algorithms are less than 1%. Algorithm 1 takes only a few steps to achieve convergence results. But the iteration may take more time. Although Algorithms 2 and 3 are computationally fast, but they may require more steps to converge.

The remainder of this paper is organized as following. In Section 2, we firstly introduce the preliminaries on FBSDEs and give the existence and uniqueness conditions of fully-coupled FBSDEs. In Section 3, the relationship between FBSDEs and an optimal control problem are presented, which indicates that the FBSDEs can be solved from a control perspective. The theoretical proof is also given. According to different kinds of state feedback, we propose another two optimal control problems for solving FBSDE (1.1). In Section 4, we present our numerical schemes and the corresponding iterative algorithms. Section 5 gives some examples and shows the comparison among different algorithms for solving coupled FBSDEs.

In this section, we mainly introduce the form of FBSDEs and the existence and uniqueness conditions of fully-coupled FBSDEs [21].

be a filtered probability space, where

W:[0,T]×Ω→R is a d-dimensional standard Brownian motion on (Ω,F,P), F={Ft}0≤t≤T is the natural filtration generated by the Brownian motion W. X0∈F0 is the initial condition for the FBSDE.

are deterministic globally continuous functions. b and σ are the drift coefficient and diffusion coefficient of X respectively, and f is referred to as the generator of the coupled FBSDE. If there is a triple (Xt,Yt,Zt) satisfies the above FBSDE on [0,T], P-almost surely, square integrable and Ft-adapted, the triple (Xt,Yt,Zt) are called the solutions of FBSDE(2.1). When functions b and σ are independent of both Y and Z, FBSDE(2.1) is called a decoupled FBSDE.

Firstly, we give two assumptions as the following,

Then, the following theorem is given:

Let Assumptions 1 and 2 hold, then there exists a unique adapted solution (X,Y,Z) of FBSDE (2.1).

Assumptions 1 and 2 are necessary but not sufficient conditions for FBSDE (2.1). Many FBSDEs not satisfying the conditions A.1 and A.2 have also solutions, such as

where we set m=n.

For convenience, in this article, we assume that L is the Lipschitz constant satisfying Assumption 1 , that is, for ∀x,x′,y,y′,z,z′

where l represents one of the functions among f,b and σ.

Essentially, the deep neural network can be regarded as a control system, which is used to approximate the mapping from the input set to the label set. The parameters in the network can be seen as the control, and the cost function can be seen as the optimization objective. Thus, we first transform the FBSDE solving problem into an optimal control problem in order to apply the deep neural network.

Before the transformation, we first give an existing conclusion. As we know, FBSDE (2.1) has a unique solution (Xt,Yt,Zt) under monotonicity conditions, and Pardoux and Tang’s results [5] have shown that (2.1) can be constructed via Picard iteration

Regarding ~Yk+10 and {~Zk+1t}0≤t≤T as controls, we consider the following control problem

In the following, we will show that control problem (3.3) is equivalent to FBSDE (3.1).

When ~Yk,~Zk are known, we consider the following SDE

(3.4) has infinite number of solutions because both the initial value ~Yk+10 and the process {~Zk+1t}0≤t≤T are uncertain.

are two functions denoted as

According to Assumption 1 (i) and as the matrix G is full-rank, we can get that functions b,σ and f are all uniformly Lipschitz, satisfying

where L is the Lipschitz constant. Then we get the following inequation:

According to Assumption 1 (ii), there exist a constant D, satisfying

Suppose Assumption 1 and 2 hold true and there exit C5≤1, where

The proof of this theorem is divided into two steps.