Threats, Protection and Attribution of Cyber Attacks on Critical Infrastructures

As Critical National Infrastructures are becoming more vulnerable to cyber attacks, their protection becomes a significant issue for any organization as well as a nation. Moreover, the ability to attribute is a vital element of avoiding impunity in cyberspace. In this article, we present main threats to critical infrastructures along with protective measures that one nation can take, and which are classified according to legal, technical, organizational, capacity building, and cooperation aspects. Finally we provide an overview of current methods and practices regarding cyber attribution and cyber peace keeping 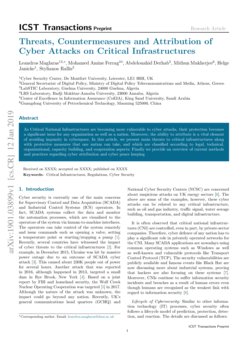 The number of cyber-attacks are continuing to rise globally. It is there...
Lynsay A. Shepherd, et al. ∙

Socio-Technical Root Cause Analysis of Cyber-enabled Theft of the U.S. Intellectual Property – The Case of APT41

A Case Study of the 2016 Korean Cyber Command Compromise

On October 2016 the South Korean cyber military unit was the victim of a...
Kyong Jae Park, et al. ∙

Defining, Evaluating, Preparing for and Responding to a Cyber Pearl Harbor

Despite not having a clear meaning, public perception and awareness make...
Jeremy Straub, et al. ∙

Phishing and Spear Phishing: examples in Cyber Espionage and techniques to protect against them

Attributing a cyber-operation through the use of multiple pieces of tech...
Paulo Shakarian, et al. ∙

Cyber security is currently one of the main concerns for Supervisory Control and Data Acquisition (SCADA) and Industrial Control Systems (ICS) operators. In fact, SCADA systems collect the data and monitor the automation processes, which are visualized to the operators of the system via human-to-machine interfaces. The operators can take control of the system remotely and issue commands such as opening a valve, setting a temperature point or starting/stopping a pump [1]. Recently, several countries have witnessed the impact of cyber threats to the critical infrastructures [2]. For example, in December 2015, Ukraine was hit by massive power outage due to an outcome of SCADA cyber attack [3]. This caused about 230K people out of power for several hours. Another attack that was reported in 2016, although happened in 2013, targeted a small dam in Rye Brook, New York [4]. Based on a joint report by FBI and homeland security, the Wolf Creek Nuclear Operating Cooperation was targeted [5] in 2017. Although the nature of the attack was unknown, the impact could go beyond any nation. Recently, UK’s general communications head quarters (GCHQ) and National Cyber Security Centers (NCSC) are concerned about suspicious attacks on UK energy sectors [6]. The above are some of the examples, however, these cyber attacks can be related to any critical infrastructure, such as oil and gas industry, traffic signal, water sewage building, transportation, and digital infrastructure.

It is often observed that critical national infrastructures (CNI) are controlled, even in part, by private-sector companies. Therefore, cyber defence of any nation has to play a significant role in privately operated networks for the CNI. Many SCADA applications are nowadays using common operating systems such as Windows as well as well-known and vulnerable protocols like Transport Control Protocol (TCP). The security vulnerabilities are publicly available and famous events like Black Hat are now discussing more about industrial systems, proving that hackers are also focusing on these systems [7]. Moreover, CNIs continue to suffer information security incidents and breaches as a result of human errors even though humans are recognised as the weakest link with regard to information security [8].

Lifecycle of Cybersecurity: Similar to other information technology (IT) processes, cyber security often follows a lifecycle model of prediction, protection, detection, and reaction. The details are discussed as follows:

SCADA systems are nowadays the targets of cyber attackers, and it is worthwhile to note that attacking them affects a substantial number of persons, potentially causing significant damage and ultimately threatening human lives [11]. Post-event investigation has frequently linked these attacks to the exploitation of vulnerabilities deeply rooted in the ICS design philosophy which focuses on availability rather than security.

In this article, we summarize the main issues in regulations for cyber security and outline several aspects of policy making to tackle cyber attacks on the CNIs. The rest of the paper is organized as follows. Section 2 discusses the main threats that critical infrastructures (CI) are facing today. Section 3 presents several measures for the protection of CI. Techniques for cyber attack attribution are discussed in Section 4. Finally, conclusions are drawn in Section 5.

Since we are moving to the era of IoT, there are two categories of attacks:

SCADA systems and substations are now interconnected with other systems thanks to the Power System Communication (PSC) systems [13]. SCADA system is the core of smart grid decision making. This interconnection between SCADA system and smart grid creates new possibilities and threats. Classification of threats in smart grids is done using different criteria such as passive or active, internal or external, etc.

According to Gope and Hwang [18], IoT-enabled attacks on healthcare critical infrastructure can be classified into three types of attack assumptions, namely, 1) Computational capabilities, 2) Listening capabilities, and 3) Broadcasting capabilities.

For modeling IoT-enabled attacks on intelligent transportation systems, Petit and Shladover [19]categorized attackers in an automated vehicle system as, 1) Internal versus external, 2) Malicious versus rational, 3) Active versus passive, 4) Local versus extended, and 5) Intentional versus unintentional. For future autonomous automated vehicles, the following attack surfaces can be considered:

In this section, we propose some measures for the protection of Critical Infrastructure. The measures are divided into two main categories: cyber security measures and cyber threat intelligence.

They are classified with respect to: legal, technical, organizational, capacity building, and cooperation aspects, as defined by the International Telecommunication Union (ITU) [24, 25].

When a cyber attack is launched against a CI, it is likely that some real-world physical revelation will follow [1]. In some instances this could even lead to physical damage, injury, environmental effects or even loss of life. According to international or national law [27], legal or regulatory investigation may be required, increasing the importance of attribution artefacts. According to NIS directive, each Member State shall designate one or more national competent authorities for the security of network and information systems that can take the leading role in securing CIs. The responsible authority of the country will have to identify whether the incident was caused by an error in the operations, maybe a fault component, or whether the processes or devices were maliciously manipulated. Artefacts should be collected and kept in a way that both authenticity, integrity and usability are guaranteed.

Researchers have surveyed individual technical approaches to attribution, including; traceback - where the traffic from a target device is recursively steppedback through its routing path to its originating source, honeypots - where vulnerable software and services are hosted in order to allow activities to be monitored among others.

Traceback is a class of methods that encompasses techniques by which the traffic from a target device is recursively stepped-back through its routing path to its originating source device [28]. Traceback can be supported by manual methods of traffic tracing or logging techniques supported from network devices. There is a third category of traceback that includes various methods of Probabilistic Packet Marking (PPM) [29], and ICMP traceback (iTrace) [30].

Honeypots approach the issue of attribution of attacks differently to Traceback methods. A honeypot is a system, or set of systems, where vulnerable software and services are hosted in order to allow activities to be monitored and logged. Several researchers have proposed the use of honeypots to protect important assets of critical infrastructure [31]. However, most of these honeypots are static systems that wait for the attackers. In order to increase the efficiency of honeypots they need to be as realistic as possible. In [32] authors introduce a honeypot network traffic generator that mimics a genuine control system in operation.

Digital Forensics is a broad subject which involves the recovery, acquisition and investigation of digital evidence. One technique that could be used is live forensics where data acquisition takes place while the system is operational. In order to avoid system crash, especially for the SCADA systems that exist in the core of each CI, authors in [33] propose the use of fail over systems. In either case post incident investigator will compete with recovery efforts, which will most likely destroy evidence.

Network Forensics field primarily involves two stages: collecting network messages and analyzing network messages. An organization must identify points in the network where they wish to collect network data. Again special care should be given regarding SCADA operation requirements [34].

Measuring the performance of attribution attacks is an open issue although several methods have been proposed [37]. The development of modelling strategies for evaluating cyber attacks [38] are also important. Cook et al. [39] have used six individual metrics, as summarized in Table 1, to measure the effectiveness of each attribution in the context of ICS that can be applied to CIs.

Attacks may sometimes originate from another nation and attribution becomes a question of which country or law enforcement agency has the responsibility and authority to investigate, under which legal framework the perpetrators can be prosecuted, and which laws apply. This transnational issue was analyzed in the Tallinn Manual on the International Law Applicable to Cyber Warfare [40]. In the same context authors in [41]

argued that as cyber warfare becomes an increasing part of wider conflict, peacekeeping organizations such as the United Nations will probably need to perform cyber peacekeeping.

In order to perform cyber peacekeping, UN or the competent international body, should also consider peace enforcement in order to protect civilians. While such an event seems valuable, the feasibility is be questionable. Research into cyber warfare [42] has shown that there is still no answer to questions such as what constitutes an armed attack in the cyber space or what the ethical boundaries of cyber warfare are. In the cyber domain, it is difficult to foresee the Security Council of th UN agreeing to enforce peace based upon a cyber conflict [43]. In depth study of how cyber peace enforcement could work and the value it could bring would be useful.

A big challenge is the technical challenges CNI presents. Facilities such as power plants and water facilities have properties, which make observation and monitoring more challenging than standard network monitoring techniques [37]. The use of proprietary protocols, air-gapping and a 24/7 availability requirement means that monitoring of events on these systems will require a specialised set of skills that are in high demand globally. A discussion on how the right expertise can be secured in the necessary numbers, and at a price that is within an operation’s budget is a necessary future research topic.

Multi-lateral cooperation can be used in order to detect attacks and perform attribution, because even the largest intelligence organizations have limited human, technological and budgetary capacities to achieve global coverage [44]. US has established already after World War II the declassified 5-eyes cooperation with UK, Canada, Australia and New Zealand and in response to 9/11 a wider cooperation the 9-eyes cooperation including Denmark, France, Netherlands and Norway and finally the 14-eyes cooperation additionally including Belgium, Italy, Spain, Sweden and Germany.

As CNIs are vulnerable to cyber attacks, their protection becomes a significant issue for any nation as well as an organization. In this article, we have summarized the primary attributes of cyber attacks to the critical infrastructures. We have further provided the protective cyber security measures that one nation can take, and which are classified according to legal, technical, organizational, capacity building, and cooperation aspects. Cyber threat intelligence is also an important protection aspect as it helps taking countermeasures in advance, and enables developing a proactive and predictive cyber security posture. Attribution of cyber attacks, especially when the latter originate from another nation, is questionable regarding which country or law enforcement agency has the authority to investigate and prosecute the penetrators and cyber peacekeeping is foreseen to become a reality.