There is no Reliable Way to Detect Hacked Ballot-Marking Devices

Election system vendors are marketing ballot-marking devices (BMDs) as a universal system, and some states are deploying them for all voters, not just those who need a BMD to vote independently. Like all devices with CPUs, BMDs can be hacked, misprogrammed, or misconfigured. BMD printout might not reflect what the BMD screen or audio confirmed. If a voter complains that the BMD altered votes, officials have no way to tell whether there was a BMD malfunction, the voter erred, or the voter is attempting to cast doubt on the election. Pre-election logic and accuracy (L A) tests have little ability to detect outcome-changing problems, in part because BMDs know the time and date, and in part because it is in practice impossible to simulate the full range of voter interactions with the device. _Parallel_ or _live_ tests of BMDs on election day address the first problem but not the second. In practice, neither L A nor parallel tests can probe all combinations of voter preferences, device settings, ballot language, duration of voter interaction, input and output interfaces, and other variables that could include a enough votes to change election outcomes. Even if less parallel testing sufficed, it would still require extra BMDs, new infrastructure for creating test patterns, new infrastructure for reporting test results, additional polling-place staff, and additional staff training. And if parallel testing discovers an error, the only remedy is to hold a new election: there is no way to reconstruct the correct election result from an untrustworthy paper trail. Minimizing the number of votes cast using BMDs is prudent election administration. 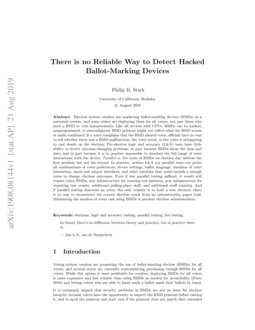 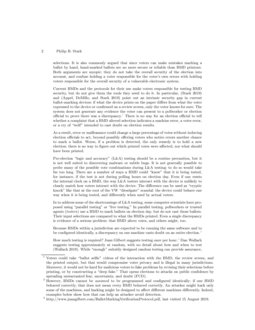 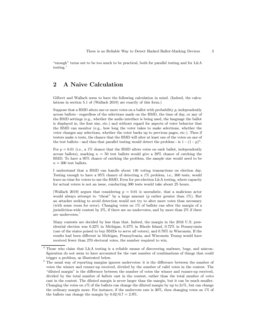 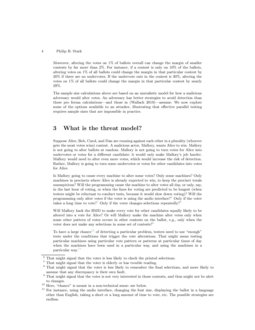 3 What is the threat model?

6 Can the number of spoiled ballots be used to detect problems?

7 Can BMDs ever be secure?