Generative models and inferential autoencoders mostly make use of ℓ_2 norm in their optimization objectives. In order to generate perceptually better images, this short paper theoretically discusses how to use Structural Similarity Index (SSIM) in generative models and inferential autoencoders. We first review SSIM, SSIM distance metrics, and SSIM kernel. We show that the SSIM kernel is a universal kernel and thus can be used in unconditional and conditional generated moment matching networks. Then, we explain how to use SSIM distance in variational and adversarial autoencoders and unconditional and conditional Generative Adversarial Networks (GANs). Finally, we propose to use SSIM distance rather than ℓ_2 norm in least squares GAN. 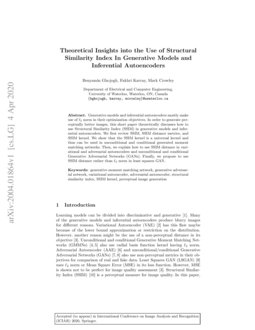 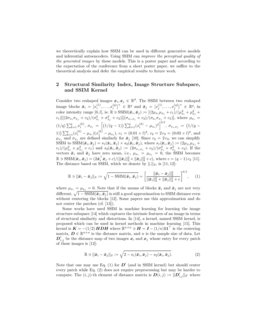 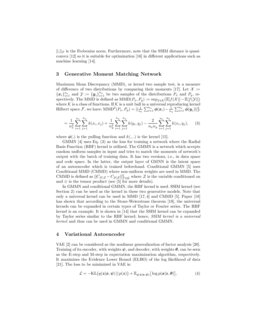 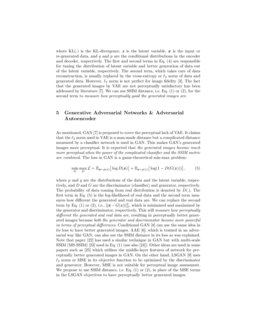 Learning models can be divided into discriminative and generative [ng2002discriminative]. Many of the generative models and inferential autoencoders produce blurry images for different reasons. Variational Autoencoder (VAE) [doersch2016tutorial] has this flaw maybe because of the lower bound approximation or restriction on the distribution. However, another reason might be the use of a non-perceptual distance in its objective [wang2009mean]. Unconditional and conditional Generative Moment Matching Networks (GMMNs) [li2015generative, ren2016conditional]

norm or Mean Square Error (MSE) in its loss function. However, MSE is shown not to be perfect for image quality assessment

[wang2009mean]. Structural Similarity Index (SSIM) [wang2004image] is a perceptual measure for image quality. In this paper, we theoretically explain how SSIM can be used in different generative models and inferential autoencoders. Using SSIM can improve the perceptual quality of the generated images by these models. This is a poster paper and according to the expectation of the conference from a short poster paper, we suffice to the theoretical analysis and defer the empirical results to future work.

where μxi=μxj=0. Note that if the means of blocks ˘xi and ˘xj are not very different, √1−SSIM(˘xi,˘xj) is still a good approximation to SSIM distance even without centering the blocks [brunet2012mathematical]. Some papers use this approximation and do not center the patches (cf. [zhao2016loss]).

[ghojogh2019image] which captures the intrinsic features of an image in terms of structural similarity and distortions. In [ghojogh2019image], a kernel, named SSIM kernel, is proposed which can be used in kernel methods in machine learning [hofmann2008kernel]. This kernel is K=−(1/2)HDH where Rn×n∋H=I−(1/n)11⊤ is the centering matrix, D∈Rn×n is the distance matrix, and n is the sample size of data. Let D′i,j be the distance map of two images xi and xj whose entry for every patch of these images is [brunet2012mathematical]:

Note that one may use Eq. (1) for D′ (and in SSIM kernel) but should center every patch while Eq. (2) does not require preprocessing but may be harder to compute. The (i,j)-th element of distance matrix is D(i,j):=||D′i,j||F where ||.||F is the Frobenius norm. Furthermore, note that the SSIM distance is quasi-convex [brunet2012mathematical] so it is suitable for optimization [brunet2018optimizing] in different applications such as machine learning [ghojogh2019image].

Maximum Mean Discrepancy (MMD), or kernel two sample test, is a measure of difference of two distributions by comparing their moments [gretton2012kernel]. Let X:={xi}nxi=1 and Y:={yi}nyi=1 be two samples of the distributions Px and Py, respectively. The MMD is defined as MMD(Px,Py):=supf∈K(E[f(X)]−E[f(Y)]) where K is a class of functions. If K is a unit ball in a universal reproducing kernel Hilbert space F, we have: MMD2(Px,Py)=||1nx∑nxi=1ϕ(xi)−1ny∑nyi=1ϕ(yi)||2F

GMMN [li2015generative] uses Eq. (3) as the loss for training a network where the Radial Basis Function (RBF) kernel is utilized. The GMMN is a network which accepts random uniform samples in input and tries to match the moments of network’s output with the batch of training data. It has two versions, i.e., in data space and code space. In the latter, the output layer of GMNN is the latent space of an autoencoder which is trained beforehand. Conditional GMMN [ren2016conditional] uses Conditional MMD (CMMD) where non-uniform weights are used in MMD. The CMMD is defined as ||CX|Z−CY|Z||2F⊗G where Z is the variable conditioned on and ⊗

is the tensor product (see

, can be seen as the E-step and M-step in expectation maximization algorithm, respectively. It maximizes the Evidence Lower Bound (ELBO) of the log likelihood of data

where KL(.) is the KL-divergence, z is the latent variable, x is the input or re-generated data, and q and p are the conditional distributions in the encoder and decoder, respectively. The first and second terms in Eq. (4) are responsible for tuning the distribution of latent variable and better generation of data out of the latent variable, respectively. The second term, which takes care of data reconstruction, is usually replaced by the cross-entropy or ℓ2 norm of data and generated data. However, ℓ2 norm is not perfect for image fidelity [wang2009mean]. The fact that the generated images by VAE are not perceptually satisfactory has been addressed by literature [goodfellow2014generative]. We can use SSIM distance, i.e. Eq. (1) or (2), for the second term to measure how perceptually good the generated images are.

As mentioned, GAN [goodfellow2014generative] is proposed to cover the perceptual lack of VAE. It claims that the ℓ2

norm used in VAE is a man-made distance but a complicated distance measured by a classifier network is used in GAN. This makes GAN’s generated images more perceptual. It is expected that

the generated images become much more perceptual when the power of the complicated classifier and the SSIM metric are combined. The loss in GAN is a game-theoretical min-max problem:

where p and q are the distributions of the data and the latent variable, respectively, and D and G

are the discriminator (classifier) and generator, respectively. The probability of data coming from real distribution is denoted by

D(.). The first term in Eq. (5) is the log-likelihood of real data and the second term measures how different the generated and real data are. We can replace the second term by Eq. (1) or (2), i.e., ||x−G(z)||2S, which is minimized and maximized by the generator and discriminator, respectively. This will measure how perceptually different the generated and real data are, resulting in perceptually better generated images because both the generator and discriminator become more powerful in terms of perceptual differences. Conditional GAN [mirza2014conditional] can use the same idea in its loss to have better generated images. AAE [makhzani2015adversarial], which is trained in an adversarial way like GAN, can also use the SSIM distance in its loss as was explained. Note that paper [kancharla2018improving] has used a similar technique in GAN but with multi-scale SSIM (MS-SSIM) [wang2003multiscale] used in Eq. (1) (see also [snell2017learning]). Other ideas are used in some papers such as [wu2017srpgan] which utilizes the middle-layer features of network for perceptually better generated images in GAN. On the other hand, LSGAN [mao2017least] uses ℓ2 norm or MSE in its objective function to be optimized by the discriminator and generator. However, MSE is not suitable for perceptual image assessment. We propose to use SSIM distance, i.e. Eq. (1) or (2), in place of the MSE terms in the LSGAN objectives to have perceptually better generated images.

We theoretically analyzed how to use SSIM in generative models and inferential autoencoders including GMMN, VAE, AAE, GAN, and LSGAN. The use of SSIM in these models can improve the perceptual quality of the generated images as these models use non-perceptual distance metrics in their loss functions.