The Unfairness of Popularity Bias in Music Recommendation: A Reproducibility Study

Research has shown that recommender systems are typically biased towards popular items, which leads to less popular items being underrepresented in recommendations. The recent work of Abdollahpouri et al. in the context of movie recommendations has shown that this popularity bias leads to unfair treatment of both long-tail items as well as users with little interest in popular items. In this paper, we reproduce the analyses of Abdollahpouri et al. in the context of music recommendation. Specifically, we investigate three user groups from the Last.fm music platform that are categorized based on how much their listening preferences deviate from the most popular music among all Last.fm users in the dataset: (i) low-mainstream users, (ii) medium-mainstream users, and (iii) high-mainstream users. In line with Abdollahpouri et al., we find that state-of-the-art recommendation algorithms favor popular items also in the music domain. However, their proposed Group Average Popularity metric yields different results for Last.fm than for the movie domain, presumably due to the larger number of available items (i.e., music artists) in the Last.fm dataset we use. Finally, we compare the accuracy results of the recommendation algorithms for the three user groups and find that the low-mainstreaminess group significantly receives the worst recommendations. 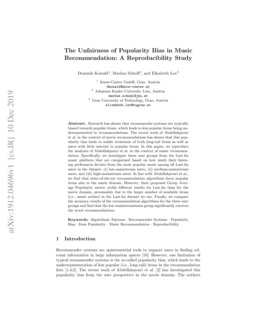 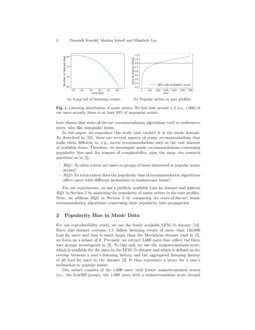 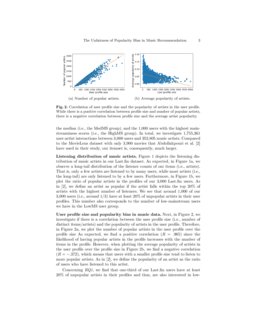 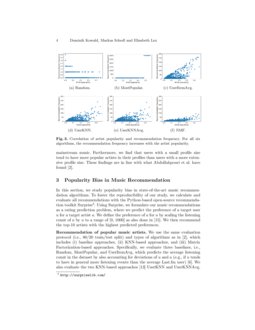 The Unfairness of Popularity Bias in Recommendation

Revisiting Popularity and Demographic Biases in Recommender Evaluation and Effectiveness

A Re-visit of the Popularity Baseline in Recommender Systems

Allowing for equal opportunities for artists in music recommendation

Recommendation to groups of users is a challenging and currently only pa...
Zsolt Mezei, et al. ∙

The role of recommendation systems in the diversity of content consumpti...
Quentin Villermet, et al. ∙

Recommender systems are quintessential tools to support users in finding relevant information in large information spaces [10]. However, one limitation of typical recommender systems is the so-called popularity bias, which leads to the underrepresentation of less popular (i.e., long-tail) items in the recommendation lists [1, 4, 5]. The recent work of Abdollahpouri et al. [2] has investigated this popularity bias from the user perspective in the movie domain. The authors have shown that state-of-the-art recommendation algorithms tend to underserve users, who like unpopular items.

In this paper, we reproduce this study and conduct it in the music domain. As described in [16], there are several aspects of music recommendations that make them different to, e.g., movie recommendations such as the vast amount of available items. Therefore, we investigate music recommendations concerning popularity bias and, for reasons of comparability, raise the same two research questions as in [2]:

For our experiments, we use a publicly available Last.fm dataset and address RQ1 in Section 2 by analyzing the popularity of music artists in the user profiles. Next, we address RQ2 in Section 3 by comparing six state-of-the-art music recommendation algorithms concerning their popularity bias propagation.

For our reproducibility study, we use the freely available LFM-1b dataset [14]. Since this dataset contains 1.1 billion listening events of more than 120,000 Last.fm users and thus is much larger than the MovieLens dataset used in [2], we focus on a subset of it. Precisely, we extract 3,000 users that reflect the three user groups investigated in [2]. To this end, we use the mainstreaminess score, which is available for the users in the LFM-1b dataset and which is defined as the overlap between a user’s listening history and the aggregated listening history of all Last.fm users in the dataset [3]. It thus represents a proxy for a user’s inclination to popular music.

Listening distribution of music artists. Figure 1 depicts the listening distribution of music artists in our Last.fm dataset. As expected, in Figure (a)a, we observe a long-tail distribution of the listener counts of our items (i.e., artists). That is, only a few artists are listened to by many users, while most artists (i.e., the long-tail) are only listened to by a few users. Furthermore, in Figure (b)b, we plot the ratio of popular artists in the profiles of our 3,000 Last.fm users. As in [2], we define an artist as popular if the artist falls within the top 20% of artists with the highest number of listeners. We see that around 1,000 of our 3,000 users (i.e., around 1/3) have at least 20% of unpopular artists in their user profiles. This number also corresponds to the number of low-mainstream users we have in the LowMS user group.

Concerning RQ1, we find that one-third of our Last.fm users have at least 20% of unpopular artists in their profiles and thus, are also interested in low-mainstream music. Furthermore, we find that users with a small profile size tend to have more popular artists in their profiles than users with a more extensive profile size. These findings are in line with what Abdollahpouri et al. have found [2].

In this section, we study popularity bias in state-of-the-art music recommendation algorithms. To foster the reproducibility of our study, we calculate and evaluate all recommendations with the Python-based open-source recommendation toolkit Surprise

111http://surpriselib.com/. Using Surprise, we formulate our music recommendations as a rating prediction problem, where we predict the preference of a target user u for a target artist a. We define the preference of a for u by scaling the listening count of a by u to a range of [0, 1000] as also done in [15]. We then recommend the top-10 artists with the highest predicted preferences.

Recommendation of popular music artists. We use the same evaluation protocol (i.e., 80/20 train/test split) and types of algorithms as in [2]

, which includes (i) baseline approaches, (ii) KNN-based approaches, and (iii) Matrix Factorization-based approaches. Specifically, we evaluate three baselines, i.e., Random, MostPopular, and UserItemAvg, which predicts the average listening count in the dataset by also accounting for deviations of

u and a (e.g., if u tends to have in general more listening events than the average Last.fm user) [6]. We also evaluate the two KNN-based approaches [13] UserKNN and UserKNNAvg, which is a hybrid combination of UserKNN and UserItemAvg. Finally, we include NMF (Non-Negative Matrix Factorization) into our study [9]. To reduce the computational effort of our study, in our evaluation, we exclude ItemKNN [12] as well as SVD++ [11] in contrast to [2]. In Figure 3, we plot the correlation of artist popularity and how often the six algorithms recommend these artists. For all algorithms except for Random, we find a positive correlation, which means that popular items are recommended more often than unpopular items. As expected, this effect is most evident for the MostPopular algorithm and not present at all for the Random algorithm. It also seems that this popularity bias is not as strong in the case of NMF, which we will investigate further in the next section of this paper.

In Figure 4, we plot the ΔGAP for our six algorithms and three user groups. In contrast to the results presented in [2], where the LowMS group (i.e., the niche users) receives the highest values, we do not observe a clear difference between the groups except for MostPopular. We think that this is the case because of the large number of items we have in our Last.fm dataset (i.e., 352,805 artists compared to 3,900 movies in MovieLens). However, in line with Figure 3, we again find that Random and NMF provide the fairest recommendations.

To further investigate RQ2, we analyze the Mean Average Error (MAE) [17] results of the four personalized algorithms for our user groups. As shown in Table 1

, the LowMS group receives significantly worse (according to a t-test) recommendations than MedMS and HighMS for all algorithms. Interestingly, the MedMS group gets the best recommendations, probably since the users in this group have the largest profiles (i.e., on average 715 artists per user as compared to around 500 for the other two groups). Across the algorithms, NMF provides the best results. This is especially of interest since NMF also provided the fairest results in terms of artist popularity across the personalized algorithms.

In this paper, we reproduced the study of [2] on the unfairness of popularity bias in movie recommender systems, which we adopted to the music domain. Similar to the original paper, we find (i) that users only have a limited interest in popular items (RQ1) and (ii) that users interested in unpopular items (i.e., LowMS) receive worse recommendations than users interested in popular items (i.e., HighMS). However, we also find that the proposed GAP metric does not provide the same results for Last.fm as it does for MovieLens, probably due to the high number of available items.

For future work, we plan to adapt this GAP metric in order to make it more robust for various domains. Furthermore, we want to study the characteristics of the LowMS users in order to better understand why they receive the worst recommendations and to potentially overcome this with novel algorithms (e.g., [7]).