For a rational number r such that 1<r≤ 2, an undirected r-power is a word of the form xyx', where the word x is nonempty, the word x' is in {x,x^R}, and we have |xyx'|/|xy|=r. The undirected repetition threshold for k letters, denoted (k), is the infimum of the set of all r such that undirected r-powers are avoidable on k letters. We first demonstrate that (3)=74. Then we show that (k)≥k-1k-2 for all k≥ 4. We conjecture that (k)=k-1k-2 for all k≥ 4, and we confirm this conjecture for k∈{4,5,…,21}. We then consider related problems in pattern avoidance; in particular, we find the undirected avoidability index of every binary pattern. This is an extended version of a paper presented at WORDS 2019, and it contains new and improved results. 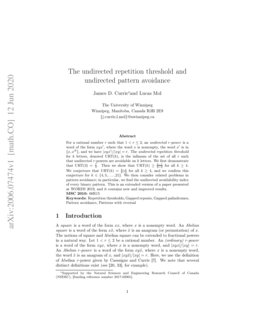 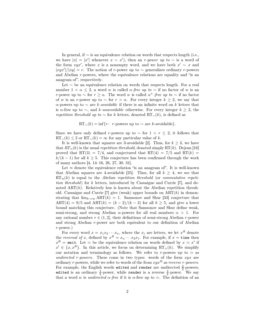 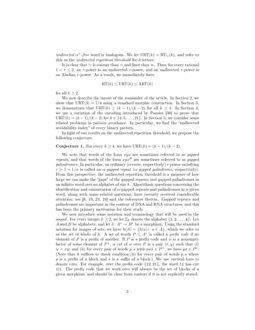 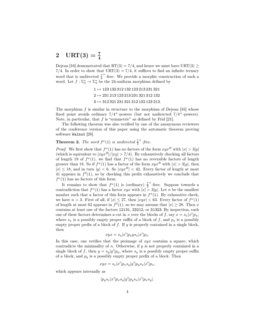 Repetition avoidance in products of factors

We consider a variation on a classical avoidance problem from combinator...
Pamela Fleischmann, et al. ∙

We begin a systematic study of the relations between subword complexity ...
Jeffrey Shallit, et al. ∙

In this paper, we present a new technique to obtain upper bounds on undi...
Satyajit Thakor, et al. ∙

On the Partition Bound for Undirected Unicast Network Information Capacity

One of the important unsolved problems in information theory is the conj...
Mohammad Ishtiyaq Qureshi, et al. ∙

In general, if ∼ is an equivalence relation on words that respects length (i.e., we have |x|=|x′| whenever x∼x′), then an r-power up to ∼ is a word of the form xyx′, where x is a nonempty word, and we have both x′∼x and |xyx′|/|xy|=r. The notion of r-power up to ∼ generalizes ordinary r-powers and Abelian r-powers, where the equivalence relations are equality and “is an anagram of”, respectively.

Let ≈ denote the equivalence relation “is an anagram of”. It is well-known that Abelian squares are 4-avoidable [25]. Thus, for all k≥4, we see that RT≈(k) is equal to the Abelian repetition threshold (or commutative repetition threshold) for k letters, introduced by Cassaigne and Currie [7], and denoted ART(k). Relatively less is known about the Abelian repetition threshold. Cassaigne and Currie [7] give (weak) upper bounds on ART(k) in demonstrating that limk→∞ART(k)=1. Samsonov and Shur [33] conjecture that ART(4)=9/5 and ART(k)=(k−2)/(k−3) for all k≥5, and give a lower bound matching this conjecture. (Note that Samsonov and Shur define weak, semi-strong, and strong Abelian α-powers for all real numbers α>1. For any rational number r∈(1,2], their definitions of semi-strong Abelian r-power and strong Abelian r-power are both equivalent to our definition of Abelian r-power.)

For every word x=x1x2⋯xn, where the xi are letters, we let xR denote the reversal of x, defined by xR=xn⋯x2x1. For example, if x={time} then xR={emit}. Let ≃ be the equivalence relation on words defined by x≃x′ if x′∈{x,xR}. In this article, we focus on determining RT≃(k). We simplify our notation and terminology as follows. We refer to r-powers up to ≃ as undirected r-powers. These come in two types: words of the form xyx are ordinary r-powers, while we refer to words of the from xyxR as reverse r-powers. For example, the English words edited and render are undirected 32-powers; edited is an ordinary 32-power, while render is a reverse 32-power. We say that a word w is undirected α-free if it is α-free up to ≃. The definition of an undirected α+-free word is analogous. We let URT(k)=RT≃(k), and refer to this as the undirected repetition threshold for k letters.

We now describe the layout of the remainder of the article. In Section 2, we show that URT(3)=7/4 using a standard morphic constuction. In Section 3, we demonstrate that URT(k)≥(k−1)/(k−2) for all k≥4. In Section 4, we use a variation of the encoding introduced by Pansiot [30] to prove that URT(k)=(k−1)/(k−2) for k∈{4,5,…,21}. In Section 5, we consider some related problems in pattern avoidance. In particular, we find the “undirected avoidability index” of every binary pattern.

In light of our results on the undirected repetition threshold, we propose the following conjecture.

We note that words of the form xyx are sometimes referred to as gapped repeats, and that words of the form xyxR are sometimes referred to as gapped palindromes. In particular, an ordinary (reverse, respectively) r-power satisfying r≥1+1/α is called an α-gapped repeat (α-gapped palindrome, respectively). From this perspective, the undirected repetition threshold is a measure of how large we can make the “gaps” of the gapped repeats and gapped palindromes in an infinite word over an alphabet of size k. Algorithmic questions concerning the identification and enumeration of α-gapped repeats and palindromes in a given word, along with some related questions, have recently received considerable attention; see [24, 19, 23, 8] and the references therein. Gapped repeats and palindromes are important in the context of DNA and RNA structures, and this has been the primary motivation for their study.

We now introduce some notation and terminology that will be used in the sequel. For every integer k≥2, we let Σk denote the alphabet {{1},{2},…,{k}}. Let A and B be alphabets, and let h:A∗→B∗ be a morphism. Using the standard notation for images of sets, we have h(A)={h(a): a∈A}, which we refer to as the set of blocks of h. A set of words P⊆A∗ is called a prefix code if no element of P is a prefix of another. If P is a prefix code and w is a nonempty factor of some element of P+, a cut of w over P is a pair (x,y) such that (i) w=xy; and (ii) for every pair of words p,s with pws∈P+, we have px∈P∗. (Note that it suffices to check condition (ii) for every pair of words p,s where p is a prefix of a block and s is a suffix of a block.) We use vertical bars to denote cuts. For example, over the prefix code {{12},{21}}, the word 11 has cut {1}|{1}. The prefix code that we work over will always be the set of blocks of a given morphism, and should be clear from context if it is not explicitly stated.

The morphism f is similar in structure to the morphism of Dejean [16] whose fixed point avoids ordinary 7/4+-powers (but not undirected 7/4+-powers). Note, in particular, that f is “symmetric” as defined by Frid [21].

The following theorem was also verified by one of the anonymous reviewers of the conference version of this paper using the automatic theorem proving software Walnut [28].

which appears internally as

For k∈{4,5}, the statement is checked by a standard backtracking algorithm, which we performed both by hand and by computer. We now provide a general backtracking argument for all k≥6.

Fix k≥6, and suppose that w∈Σ∗k is a word of length k+4 that is undirected (k−1)/(k−2)-free. It follows that at least k−2 letters must appear between any two repeated occurrences of the same letter in w, so that any length k−1 factor of w must contain k−1 distinct letters. So we may assume that w has prefix {12}⋯{(k-1)}. Further, given any prefix u of w of length at least k−1, there are only two possibilities for the next letter in w, as it must be distinct from the k−2 distinct letters preceding it. These possibilities are enumerated in the tree of Figure 1.

Conjecture 1 proposes that the value of URT(k) matches the lower bound of Theorem 3 for all k≥4. In the next section, we confirm Conjecture 1 for some small values of k.

First we explain why we rely on a different type of construction than the one we used to prove that URT(3)=74 in Section 2. A morphism h:A∗→B∗ is called α-free (α+-free, respectively) if it maps every α-free (α+-free, respectively) word in A∗ to an α-free (α+-free, respectively) word in B∗. The morphism h is called growing if h(a)>1 for all a∈A∗. Brandenburg [3] demonstrated that for every k≥4, there is no growing RT(k)+-free morphism from Σ∗k to Σ∗k. By a minor modification of his proof, one can show that there is no growing (k−1)/(k−2)+-free morphism from Σ∗k to Σ∗k. While this does not entirely rule out the possibility that there is a morphism from Σ∗k to Σ∗k whose fixed point is (k−1)/(k−2)+-free, it suggests that a different type of construction may be required. Our constructions rely on a variation of the encoding introduced by Pansiot [30] in showing that RT(4)=7/5. Pansiot’s encoding was later used in all subsequent work on Dejean’s Conjecture.

We first describe an alternate definition of ordinary r-powers which will be useful in this section. A word w=w1⋯wn, where the wi are letters, is periodic if for some positive integer q, we have wi+q=wi for all 1≤i≤n−q. In this case, the integer q is called a period of w. The exponent of w, denoted exp(w), is the ratio between its length and its minimal period. If r=exp(w), then w is an r-power.111If r≤2, then w is an r-power as we have defined it in Section 1. If r>2, then we take this as the definition of an (ordinary) r-power. For example, the English word alfalfa has minimal period 3 and exponent 73, so it is a 73-power. We can write any r-power w as w=pe, where |pe|/|p|=r and e is a prefix of pe. In this case, we say that e is the excess of the r-power w.

Let Sk denote the symmetric group on Σk with left multiplication. Define a morphism σ:Σ∗3→Sk by

One proves by induction that r0σ(t(pi))=ri. It follows that if w=pe has period |p|, and e contains at least k−1 distinct letters, then the length |p| prefix of t(w) lies in the kernel of σ. In this case, the word t(w) is called a kernel repetition. For example, over Σ4, the word

The following straightforward lemma will be used to bound the length of reversible factors in the words that we construct.

The remainder of this section is devoted to proving Theorem 5. Essentially, we adapt and extend the technique first used by Moulin-Ollagnier [27]. A simplified version of Moulin-Ollagnier’s technique, which we follow fairly closely, is exhibited by Currie and Rampersad [15].

For the remainder of this section, we use notation as in Theorem 5, but we omit the subscripts on w, f, and g for convenience. We let r=|f({1})| and rg=|g({1})|, i.e., we say that f is r-uniform, and g is rg-uniform. We use the following properties of f and g several times:

The first property was verified by computer.

Let τ:Σ∗2→Sk be the composite morphism σ∘g. Since P is in the kernel of σ, we see that

for every {a}∈{{1},{2}}, i.e., the morphism τ satisfies the “algebraic property” described by Moulin-Ollagnier [27]. It follows that π1 is in the kernel of τ. We can repeat this process until we reach a repetition πsηs whose excess ηs has no cut. Recalling that f is an r-uniform morphism, we have

Since E contains a cut, by the discussion immediately preceding this proof, we can find a factor πsηs of fω({1}) such that ηs is a prefix of πsηs, the word πs is in the kernel of τ, and ηs does not contain a cut. Then we have

Note also that if s≥1, then we have