The Tree Stabbing Number is not Monotone 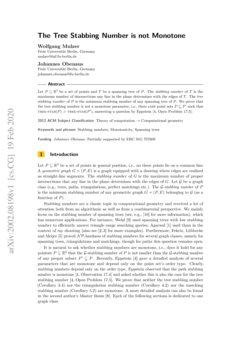 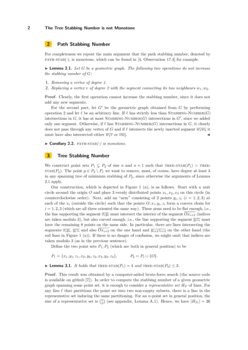 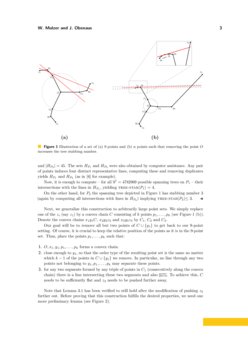 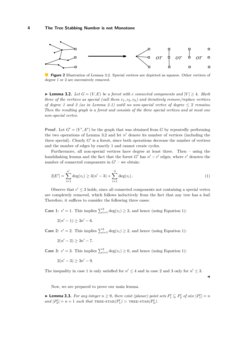 We are interested in the consequences of imposing edges in T a minimum s...
Nicolas Isoart, et al. ∙

Grouping and Recognition of Dot Patterns with Straight Offset Polygons

When the boundary of a familiar object is shown by a series of isolated ...
Toshiro Kubota, et al. ∙

A geometric graph G is xy-monotone if each pair of vertices of G is conn...
Konstantinos Mastakas, et al. ∙

A geometric graph in the plane is angle-monotone of width γ if every pai...
Anna Lubiw, et al. ∙

Stabbing numbers are a classic topic in computational geometry and received a lot of attention both from an algorithmic as well as from a combinatorial perspective. We mainly focus on the stabbing number of spanning trees (see, e.g., [10] for more information), which has numerous applications. For instance, Welzl [9] used spanning trees with low stabbing number to efficiently answer triangle range searching queries, Agarwal [1] used them in the context of ray shooting (also see [3, 2] for more examples). Furthermore, Fekete, Lübbecke and Meijer [5] proved NP-hardness of stabbing numbers for several graph classes, namely for spanning trees, triangulations and matchings, though for paths this question remains open.

For completeness we repeat the main argument that the path stabbing number, denoted by path-stab(⋅), is monotone, which can be found in [4, Observation 17.4] for example.

Let G be a geometric graph. The following two operations do not increase the stabbing number of G:

Clearly, the first operation cannot increase the stabbing number, since it does not add any new segments.

We construct point sets P1⊊P2 of size n and n+1 such that tree-stab(P1) > tree-stab(P2). The point p∈P2∖P1 we want to remove, must, of course, have degree at least 3 in any spanning tree of minimum stabbing of P2, since otherwise the arguments of Lemma 2 apply.

Define the two point sets P1,P2 (which are both in general position) to be

This result was obtained by a computer-aided brute-force search (the source code is available on github [7]). In order to compute the stabbing number of a given geometric graph spanning some point set, it is enough to consider a representative set HP of lines. For any line ℓ that partitions the point set into two non-empty subsets, there is a line in the representative set inducing the same partitioning. For an n-point set in general position, the size of a representative set is (n2) (see appendix, Lemma A). Hence, we have |HP1|=36 and |HP2|=45. The sets HP1 and HP2 were also obtained by computer assistance. Any pair of points induces four distinct representative lines, computing these and removing duplicates yields HP1 and HP2 (as in [6] for example).

On the other hand, for P2 the spanning tree depicted in Figure 1 has stabbing number 3 (again by computing all intersections with lines in HP2) implying tree-stab(P2)≤3. ∎

Next, we generalize this construction to arbitrarily large point sets. We simply replace one of the zi (say z1) by a convex chain C consisting of k points p1,…,pk (see Figure 1 (b)). Denote the convex chains x1y1C, x2y2z2 and x3y3z3 by C1, C2 and C3.

Our goal will be to remove all but two points of C∪{y1} to get back to our 9-point setting. Of course, it is crucial to keep the relative position of the points as it is in the 9-point set. Thus, place the points p1,…,pk such that:

Note that Lemma 3 has been verified to still hold after the modification of pushing z3 further out. Before proving that this construction fulfills the desired properties, we need one more preliminary lemma (see Figure 2).

Furthermore, all non-special vertices have degree at least three. Then – using the handshaking lemma and the fact that the forest G′ has n′−c′ edges, where c′ denotes the number of connected components in G′ – we obtain:

Observe that c′≤3 holds, since all connected components not containing a special vertex are completely removed, which follows inductively from the fact that any tree has a leaf. Therefore, it suffices to consider the following three cases:

Now, we are prepared to prove our main lemma.

On the one hand, it is straightforward to see that the spanning tree depicted in Figure 1 (b) has stabbing number 3 (see Figure 3 for an illustration) and hence tree-stab(P′2) ≤3.

On the other hand, we show tree-stab(P′1) ≥4 next. Assume for the sake of contradiction that there is a spanning tree T of P′1 with stabbing number at most 3. Our goal will be to carefully remove points from P1 such that the stabbing number of T cannot increase until there are only 9 points left in exactly the same relative position as in Lemma 3. Clearly, this would be a contradiction.

Consider the set of edges of T with at least one endpoint among the points in C1. There are at most 3 edges having only one endpoint in C1 (we call them bridges). If there would be more than 3 bridges, there is a line that intersects at least 4 line segments, namely a line that separates C1 from the rest. Because of the same reason, not all three bridges can go to the same other component (C2 or C3).

There are at most 3 points in C1 that are incident to a bridge and if they are distinct, one of them needs to be x1, otherwise the line separating x1 from the rest of C1 has 4 intersections. Pick three vertices v1,v2,v3 in C1 such that x1 and any point incident to a bridge is among them and mark them as special.

Next, we apply Lemma 3 to the subforest induced by C1:

No non-special vertex in C1 survives the removal process.

Then 9 points with the same order type as in Lemma 3 and a spanning tree with stabbing number 3 remain, which is a contradiction to Lemma 3.

One non-special vertex v in C1 survives the removal process.

Then v is incident to all special vertices v1,v2,v3. If v is the last vertex along C1, there is obviously a line having more than three intersections. Otherwise, by construction, there is a line ℓ that separates v from v1,v2,v3 and at the same time z3 from the rest of the point set (see Figure 4). In particular, ℓ has only z3 and v on one side and all other points on the other. z3 cannot be adjacent to v, since v is not incident to a bridge and therefore contributes another intersection to ℓ. This is a contradiction to the assumption that T was a spanning tree of stabbing number 3. ∎

We denote the triangulation stabbing number by tri-stab(⋅). Proving non-monotonicity of tri-stab(⋅) is much simpler, only exploiting the additional structure enforced by triangulations. Consider two symmetric convex chains C1={p1,…,pn} and C2={p′1,…,p′n} (sufficiently flat) each consisting of n points and facing each other as depicted in Figure 5 (a). These points constitute the point set P. P′ consists of the same 2n points and two more (slightly perturbed) points added on the line segment connecting the two middle points of C1 and C2 (as in Figure 5 (b)). Then the following holds:

Any triangulation of P must have 2n−1 segments connecting a point from C1 with a point from C2 (the green area in Figure 5 (a)). Hence,

On the other hand, the triangulation of P′ depicted in Figure 5 (b) has stabbing number n+4logn+3, which can be seen as follows. The two green areas contain n segments each and are constructed in such a way that any line ℓ may intersect at most n segments from both green areas. For this, the two points pn/2−1 and pn/2+1 need to be sufficiently far from pn/2. Figure 6 illustrates the area that contains all lines which intersect line segments of ?upper? (p1,…,pn/2) and ?lower? (pn/2,…,pn) half of the convex chain in the green region.

Since C1 and C2 are convex, it is clear that ℓ may accumulate 4logn more intersections in the blue areas. The white area contains only a constant number of segments, in total ℓ has at most n+4logn+3 intersections. Hence,

First note that the point sets in the case of matchings have to be of even size and all matchings are perfect.

Take k points p1,…,pk in convex position and one point x inside such that any segment ¯¯¯¯¯¯¯xpi is intersected by some ¯¯¯¯¯¯¯¯¯¯pjpk. Next, double all points within a small enough ε-radius (preserving general position) and for a point p name the partner point p′ (see Figure 7).

Define the point sets P1 and P2 to be:

Clearly, the perfect matching that assigns an edge to all partner points has stabbing number 2 and hence mat-stab(P2) ≤2.

If {pj,p′j} and {pk,p′k} are both not part of M, then one of the four lines depicted in Figure 7 (b) has three intersections.

If exactly one of the edges {pj,p′j} or {pk,p′k} is part of M, then one of the two lines depicted in Figure 7 (c) has three intersections.

The matching stabbing number, mat-stab(⋅), is not monotone.

Our proof of Lemma 3 relies on computer assistance and of course it would be interesting to turn this into a pen-and-paper proof.

Furthermore, it is easy to generalize stabbing numbers to the context of range spaces (X,R), where X is a set and R a set of subsets of X, called ranges. A spanning path then corresponds to a permutation of X and a set A⊆X is stabbed by a range r∈R if there are x,y∈A such that x∈r and y∉r. It is straightforward to prove Corollary 2 in this context, but we don’t know how to apply this for other graph classes.

For any set P⊆R2 of n points in general position, a set of representative lines contains exactly (n2) lines.

, which takes an ordered pair of points from

P as input and returns a realizable partition (P1,P2) of P as follows. For an ordered pair (p,q) consider the directed line ℓpq through the two points (directed from p to q). Let

Since P is in general position, (Pl,Pr) forms a realizable partition (the line ¯¯¯¯¯pq rotated infinitesimally in counterclockwise order separates Pl and Pr). Also note that the line ¯¯¯¯¯pq must be tangent to conv(P1) and conv(P2) and both convex hulls are contained on different sides of ¯¯¯¯¯pq.

We will show that for any realizable partition there exist exactly two pairs (p,q) and (p′,q′) which are mapped to this partition. Since there are 2(n2) ordered pairs on P, this proves the lemma.

Let (P1,P2)∈P be a realizable partition. Two pairs of points that are mapped to this partition can be found as follows. Consider a line ℓ separating P1 and P2 and shift ℓ towards P1 until it hits a vertex. Next, rotate ℓ (once in clockwise and once in counterclockwise order) until it hits a vertex of the other set. Note that if we a hit a vertex of the same set, we just continue to rotate around this one (see Figure 8 (a)). This way we get exactly two distinct pairs of points (because of general position) that are mapped to the partition (P1,P2) if ordered accordingly (see Figure 8 (b)).

On the other hand, there is no other line tangent to P1 and P2 simultaneously and having both sets entirely contained on different sides. ∎