The statistical effect of entropic regularization in optimal transportation 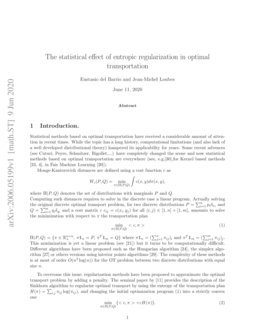 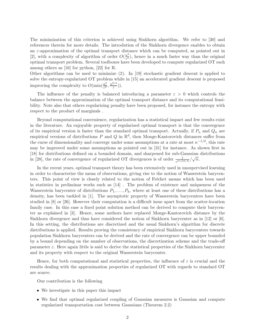 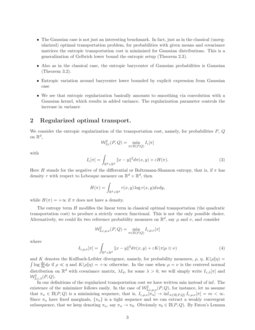 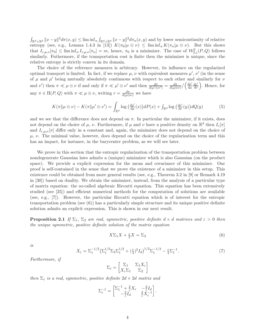 Statistical methods based on optimal transportation have received a considerable amount of attention in recent times. While the topic has a long history, computational limitations (and also lack of a well developed distributional theory) hampered its applicability for years. Some recent advences (see Cuturi, Peyre, Schmitzer, Rigollet,…) have completely changed the scene and now statistical methods based on optimal transportation are everywhere (see, e.g.[32],for Kernel based methods [24, 4]

Monge-Kantorovich distances are defined using a cost function c as

where Π(P,Q) denotes the set of distributions with marginals P and Q.

P=∑ni=1piδxi and Q=∑mi=1qiδyi and a cost matrix c cij=c(xi,yj) for all (i,j)∈[1,n]×[1,m], amounts to solve the minimization with respect to π the transportation plan


Π(P,Q)={π∈Rn×n+,π1n=P,πT1m=Q} where π1n=(∑nj=1πij)i and πT1m=(∑mj=1πij)j. This minimization is yet a linear problem (see [22]) but it turns to be computationally difficult. Different algorithms have been proposed such as the Hungarian algorithm [25], the simplex algorithm [28] or others versions using interior points algorithms [31]. The complexity of these methods is at most of order O(n3log(n)) for the OT problem between two discrete distributions with equal size n. To overcome this issue, regularization methods have been proposed to approximate the optimal transport problem by adding a penalty. The seminal paper by [11] provides the description of the Sinkhorn algorithm to regularize optimal transport by using the entropy of the transportation plan H(π)=∑i,jπijlog(πij), and changing the initial optimization program (1) into a strictly convex one

The minimization of this criterion is achieved using Sinkhorn algorithm. We refer to [32] and references therein for more details. The introdution of the Sinkhorn divergence enables to obtain an ε-approximation of the optimal transport distance which can be computed, as pointed out in [2], with a complexity of algorithm of order O(n2ε3), hence in a much faster way than the original optimal transport problem. Several toolboxes have been developed to compute regularized OT such among others as [16] for python, [23] for R. Other algorithms can be used to minimize (2). In [19]stochastic gradient descent is applied to solve the entropy-regularized OT problem while in [15] an accelerated gradient descent is proposed improving the complexity to O(min(n2ε2,n9/4ε)). The influence of the penalty is balanced introducing a parameter ε>0 which controls the balance between the approximation of the optimal transport distance and its computational feasibility. Note also that others regularizing penalty have been proposed, for instance the entropy with respect to the product of marginals . Beyond computational convenience, regularization has a statistical impact and few results exist in the literature. An enjoyable property of regularized optimal transport is that the convergence of its empirical version is faster than the standard optimal transport. Actually, if Pn and Qn are empirical versions of distributions P and Q in Rd

, then Monge-Kantorovich distances suffer from the curse of dimensionality and converge under some assumptions at a rate at most

n−1/d, this rate may be improved under some assumptions as pointed out in [33] for instance. As shown first in [18] for distributions defined on a bounded domain, and sharpened for sub-Gaussian distributions in [30], the rate of convergence of regularized OT divergences is of order 1ε2+[5d/4]/√n

. In the recent years, optimal transport theory has been extensively used in unsupervised learning in order to characterize the mean of observations, giving rise to the notion of Wasserstein barycenters. This point of view is closely related to the notion of Fréchet means which has been used in statistics in preliminar works such as

[14] . The problem of existence and uniqueness of the Wasserstein barycenter of distributions P1,…,Pk, where at least one of these distributions has a density, has been tackled in [1]. The asymptotic property of Wasserstein barycenters have been studied in [8] or [27]. However their computation is a difficult issue apart from the scatter-location family case. In this case a fixed point solution method can be derived to compute their barycenter as explained in [3]. Hence, some authors have replaced Monge-Kantorovich distance by the Sinkhorn divergence and thus have considered the notion of Sinkhorn barycenter as in [12] or [6]. In this setting, the distributions are discretized and the usual Sinkhorn’s algorithm for discrete distributions is applied. Results proving the consistency of empirical Sinkhorn barycenters towards population Sinkhorn barycenters can be derived and the rate of convergence can be upper bounded by a bound depending on the number of observations, the discretization scheme and the trade-off parameter ε. Here again little is said to derive the statistical properties of the Sinkhorn barycenter and its property with respect to the original Wasserstein barycenter. Hence, for both computational and statistical properties, the influence of ε is crucial and the results dealing with the approximation properties of regularized OT with regards to standard OT are scarce. Very recently some papers all independently have proved in [21] similar expressions for the closed form of regularized optimal transport between Gaussian distributions, including in their case the case of unbalanced transport. In [29], similar formulations have been derived using proofs based on the solution of the Schrödinger system that can be written to compute the entropic transport plan. All three points of view are complementary and provide new insights on entropic optimal transport. Our contribution is the following

We consider the entropic regularization of the transportation cost, namely, for probabilities P, Q on Rd,

Here H stands for the negative of the differential or Boltzmann-Shannon entropy, that is, if π has density r with respect to Lebesque measure on Rd×Rd, then

The entropy term H modifies the linear term in classical optimal transportation (the quadratic transportation cost) to produce a strictly convex functional. This is not the only possible choice. Alternatively, we could fix two reference probability measures on Rd, say μ and ν, and consider

is the centered normal distribution on

In our definitions of the regularized transportation cost we have written min instead of inf. The existence of the minimizer follows easily. In the case of W22,ε,μ,ν(P,Q), for instance, let us assume that πn∈Π(P,Q) is a minimizing sequence, that is, Iε,μ,ν[πn]→infπ∈Π(P,Q)Iε,μ,ν[π]=m<∞. Since πn have fixed marginals, {πn} is a tight sequence and we can extract a weakly convergent subsequence, that we keep denoting πn, say πn→π0. Obviously π0∈Π(P,Q). By Fatou’s Lemma ∫Rd×Rd∥x−y∥2dπ(x,y)≤liminfn∫Rd×Rd∥x−y∥2dπn(x,y) and by lower semicontinuity of relative entropy (see, e.g., Lemma 1.4.3 in [13]) K(π0|μ⊗ν)≤liminfnK(πn|μ⊗ν). But this shows that Iε,μ,ν[π0]≤liminfnIε,μ,ν[πn]=m, hence, π0 is a minimizer. The case of W22,ε(P,Q) follows similarly. Futhermore, if the transportation cost is finite then the minimizer is unique, since the relative entropy is strictly convex in its domain.

The choice of the reference measures is arbitrary. However, its influence on the regularized optimal transport is limited. In fact, if we replace μ, ν with equivalent measures μ′, ν′ (in the sense of μ and μ′ being mutually absolutely continuous with respect to each other and similarly for ν and ν′) then π≪μ⊗ν if and only if π≪μ′⊗ν′ and then dπd(μ′⊗ν′)=dπd(μ⊗ν)/(dμ′dμdν′dν). Hence, for any π∈Π(P,Q) with π≪μ⊗ν, writing r=dπd(μ⊗ν) we have

We prove in this section that the entropic regularization of the transportation problem between nondegenerate Gaussian laws admits a (unique) minimizer which is also Gaussian (on the product space). We provide a explicit expression for the mean and covariance of this minimizer. Our proof is self-contained in the sense that we prove the existence of a minimizer in this setup. This existence could be obtained from more general results (see, e.g., Theorem 3.2 in [9] or Remark 4.19 in [32]) based on duality. We obtain the minimizer, instead, from the analysis of a particular type of matrix equation: the so-called algebraic Riccatti equation. This equation has been extensively studied (see [26]) and efficient numerical methods for the computation of solutions are available (see, e.g., [7]). However, the particular Riccatti equation which is of interest for the entropic transportation problem (see (6)) has a particularly simple structure and its unique positive definite solution admits an explicit expression. This is shown in our next result.

then Σε is a real, symmetric, positive definite 2d×2d matrix and

Proof. The fact that Xε solves (6) can be checked by simple inspection. Xε is obviously symmetric. Hence, it suffices to show that it is positive definite or, equivalently, that (Σ1/21Σ2Σ1/21+(ε4)2Id)1/2−ε4Id

is positive definite. This, in turn, will follow if we prove that every eigenvalue, say

Observe now that A:=Σ−1/21ZΣ1/21 is a symmetric, positive definite matrix. From the last identity we see that

The inverse of the solution of equation (6) can be expressed in terms of Yε, the unique symmetric positive definite solution of the alternative Riccati equation

Proof. We write rP and rQ for the densities of P and Q, respectively. From (11) and the comments above we see that we only have to consider the case μ1=μ2=0. Also, since H(π) can only be finite if π has a density, we can rewrite (3) as

It shows also that if r∈R(P,Q) can be written as r(x,y)=ef(x)+g(y)−∥x−y∥2ε then r is a minimizer for the entropy-regularized transportation problem (indeed, by the strict convexity of H, the unique minimizer).

Now, if π0 denotes the centered Gaussian distribution on Rd×Rd with covariance matrix Σε as in Proposition 2.1, then, obviously, π0∈Π(P,Q). From the expression for Σ−1ε and denoting Aε=Σ−11+2εXε and Bε=2εX−1ε we see that the density of π0 equals

This proves that π0 minimizes the regularized transportation cost between P and Q.

Finally, to prove (12) we note first that

The proof of Theorem 2.2 can be easily adapted to other entropic regularizations. In particular, we can check that π0 is also the minimizer of Iε,λ[π] and also that

Theorem 2.2 shows that the entropic transportation cost between normal laws is, as in the case of classical transportation cost, a sum of two contributions. One accounts for the deviation in mean between the two laws. This part remains unchanged by the regularization with negative differential entropy (but not with relative entropies). The other contribution, which accounts for deviations between the covariance matrices, behaves differently, but this behavior is also easier to understand in the case of W2,ε. In the one-dimensional case we see that

While Theorem 2.2 is limited to Gaussian probabilities, its scope goes beyond that case. In classical optimal transportation the Gaussian case provides a lower bound for the quadratic transportation cost through Gelbrich’s bound (see in [10] which improves the bound in [17] ). We show next that this carries over to entropic regularizations of transportation cost.

If P and Q are probabilites on Rd with means μ1,μ2 and positive definite covariance matrices Σ1,Σ2, respectively, then

Proof. As in the proof of Theorem 2.2, it suffices to consider the case of centered P and Q. If P (or Q) does not have a density then Π(P,Q) does not contain any probability with a density and, consequently, Iε[π]=+∞ for every π∈Π(P,Q) and the result is trivial. We assume, therefore, that P and Q are absolutely continuous w.r.t. Lebesgue measure. We consider π∈Π(P,Q) with density r and denote by r0 the density of π0, as defined in Theorem 2.2. Then (recall (13))

To conclude this section we present a simple result on best approximation with respect to entropic transportation cost. In the case ε=0 (classical optimal transportation) W2 is a metric and for any P

with finite second moment we have

The fact that W2,ε is no longer a metric for ε>0 changes the nature of the problem and we may wonder which Q∈F2(Rd) is closest to P in the sense of minimizing W22(P,Q). We show next that in the case of Gaussian P the problem admits a simple solution.

Assume that P is a probability on Rd with a density rP such that logrP(x)∈L1(P). Then

with the minimization extended to the set of all probabilities on Rd. Furthermore, P∗Nd(0,ε2Id) is the unique minimizer.

Proof. We consider a probability on Rd×Rd with first marginal P and f∈L1(P). Arguing as in the proof of Theorem 2.2 (take g=0) we see that