The stabilizer for n-qubit symmetric states 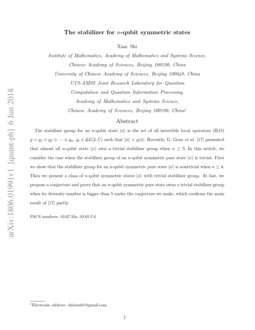 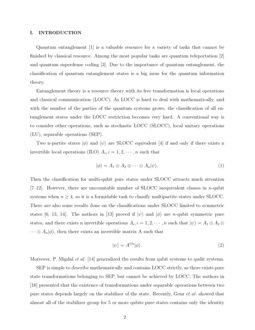 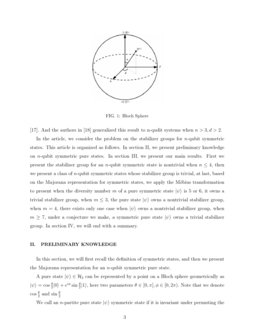 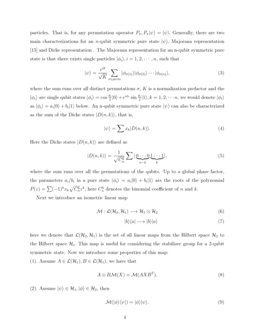 Quantum entanglement HHH is a valuable resource for a variety of tasks that cannot be finished by classical resource. Among the most popular tasks are quantum teleportation BB and quantum superdense coding BS . Due to the importance of quantum entanglement, the classification of quantum entanglement states is a big issue for the quantum information theory. Entanglement theory is a resource theory with its free transformation is local operations and classical communication (LOCC). As LOCC is hard to deal with mathematically, and with the number of the parties of the quantum systems grows, the classification of all entanglement states under the LOCC restriction becomes very hard. A conventional way is to consider other operations, such as stochastic LOCC (SLOCC), local unitary operations (LU), separable operations (SEP). Two n-partite states |ϕ⟩ and |ψ⟩ are SLOCC equivalent WGJ if and only if there exists n invertible local operations (ILO) Ai,i=1,2,⋯,n such that

Then the classification for multi-qubit pure states under SLOCC attracts much attention MBDM ; CC ; L ; ZZH ; LL ; GW . However, there are uncountable number of SLOCC inequivalent classes in n-qubit systems when n≥4,

so it is a formidable task to classify multipartite states under SLOCC.

SEP is simple to describe mathematically and contains LOCC strictly, as there exists pure state transformations belonging to SEP, but cannot be achieved by LOCC. The authors in GRW presented that the existence of transformations under separable operations between two pure states depends largely on the stabilizer of the state. Recently, Gour et al. showed that almost all of the stabilizer group for 5 or more qubits pure states contains only the identity GKW . And the authors in SW generalized this result to n-qudit systems when n>3,d>2. Symmetric states belong to the space that is spanned by the pure states invariant under particle exchange, and there are some results done on the classifications under SLOCC limited to symmetric states TSPM ; PSM ; PR ; PJM ; BBM . The authors in PSM proved if |ψ⟩ and |ϕ⟩ are n-qubit symmetric pure states, and there exists n invertible operations Ai,i=1,2,⋯,n such that |ψ⟩=A1⊗A2⊗⋯⊗An|ϕ⟩,

then there exists an invertible matrix A such that

In this section, we will first recall the definition of symmetric states, and then we present the Majorana representation for an n-qubit symmetric pure state. A pure state |ψ⟩∈H2 can be represented by a point on a Bloch sphere geometrically as |ψ⟩=cosθ2|0⟩+eiϕsinθ2|1⟩, here two parameters θ∈[0,π],ϕ∈[0,2π).

where the sum runs over all distinct permutations σ, K is a normalization prefactor and the |ϕi⟩ are single qubit states |ϕi⟩=cosθi2|0⟩+eiϕisinθi2|1⟩,i=1,2,⋯n, we would denote |ϕi⟩ as |ϕi⟩=ai|0⟩+bi|1⟩ below. An n-qubit symmetric pure state |ψ⟩ can also be characterized as the sum of the Dicke states |D(n,k)⟩, that is,

Here the Dicke states |D(n,k)⟩ are defined as

where the sum runs over all the permutations of the qubits. Up to a global phase factor, the parameters ai/bi in a pure state |ϕi⟩=ai|0⟩+bi|1⟩ are the roots of the polynomial P(z)=∑(−1)kxk√Cknzk, here Ckn denotes the binomial coefficient of n and k. Next we introduce an isometric linear map

here we denote that L(H1,H2) is the set of all linear maps from the Hilbert space H1 to the Hilbert space H2. This map is useful for considering the stabilizer group for a 2-qubit symmetric state. Now we introduce some properties of this map: (1). Assume A∈L(H1),B∈L(H1), we have that

(7). The M¨obius transformation forms a group, M¨obius transformation is isotropic to the projective linear group PSL(2,C)≅SL(2,C)/{I,−I}. As we know, the stereographic projection is a mapping that projects a sphere onto a plane. This projection is defined on the whole sphere except a point, and this map is smooth and bijective. It is conformal, i.e. it preserves the angels at where curves meet. By transforming the majorana points of a pure state |ψ⟩ to an extended complex plane, we may get the following proposition MW .

First we present the stabilizer group for a two-qubit symmetric pure state |ψ⟩∈H2⊗H2 is nontrivial.

Assume that |ψ⟩ is a 2-qubit symmetric pure state, |ψ⟩=∑2i=0ci|D(2,i)⟩, then the stabilizer group for the state |ψ⟩ is nontrivial.

As there are four equations and eight variables, then we know that the rank of the solution vectors is more than 1, that is, the stabilizer group for the state

Now we present a lemma to show an n-qubit symmetric pure state owns a nontrivial stabilizer group when n=3,4.

Next we will use the method proposed in GKW to give a class of symmetric states with its stabilizer group containing only the identity. First we introduce the definition of SL-invariant polynomials. A polynomial f:H⟶C is SL-invariant if f(g|ψ⟩)=f(|ψ⟩),∀g∈SL(2,C)⊗SL(2,C)⋯⊗SL(2,C), here we denote H=H2⊗H2⊗⋯⊗H2 and SL(2,C)={A=(a11a12a21a22)|aij∈C,i,j=1,2,det(A)=1}. f2 is a SL-invariant polynomial with degree 2, which is defined as f2(|ψ⟩)=(|ψ⟩,|ψ⟩)=⟨ψ∗|σ⊗ny|ψ⟩, here σy is the Pauli operator with its matrix representation (0−ii0). Due to the property of σy, we have that when n

Here Lie(G) is the Lie algebra of G. The critical set is valuable, as many important states in quantum information theory, such as the Bell states, GHZ states, cluster states and graph states, belong to the set of critical states. Then we present a fundamental characterization of critical states.

Due to this lemma, Gour and Wallach in GNW showed that ψ∈Hn is critical if and only if all the local density matrices of |ψ⟩ are proportional to the identity. And by the lemma in GKW and the theorem 2.12 in W , for a class of pure states |ψ⟩∈Crit(Hn), if we could show the set Kψ={U1⊗U2⊗⋯⊗Un∈K|U1⊗U2⊗⋯⊗Un|ψ⟩=|ψ⟩} contains only the identity, then Gψ={I}.

the equality (17) can be changed as

Here we present another proof on GLn={I}, |Ln⟩ is defined in the equality (8) of the article GKW . Note that the examples above tells us Gψ={I}, however, ~Gψ⊃{I}. It seems that this result is simple, However, this method is very useful to present nontrivial examples of states in n-qudit systems with nontrivial stabilizer groups SW . At last, I would like to apply M¨obius transformation to show when the diversity number m of an n-qubit symmetric pure state |ψ⟩ is 5 or 6, the stabilizer group of |ψ⟩ is trivial, when m≥7, under a conjecture we make, the stabilizer group of |ψ⟩ is trivial. Assume a pure symmetric state |ψ⟩ can be represented in terms of Majorana representation:

where the sum takes over all the permutations and K is the normalization for the state |ψ⟩. Due to the main results proposed by Mathonet et al. PSM , we see that if |ψ⟩=g1⊗g2⊗⋯⊗gn|ψ⟩, then there exists an ILO g such that |ψ⟩=g⊗n|ψ⟩, i.e. if we could prove {g|g⊗n|ψ⟩=|ψ⟩}={I}, then the stabilizer group of |ψ⟩ is trivial. From the Eq.(19),

Due to the uniqueness of the Majorana representation for a symmetric state and according to the equality (21), we see that there is a permutation σ such that

Assume |ψ⟩ is an n-qubit symmetric pure state, then the stabilizer group of |ψ⟩ is nontrivial if and only if there exists nontrivial M¨obius transformation that permutes the Majorana roots of |ψ⟩.

Assume the diversity number of a symmetric state |ψ⟩ is m, the divergence configuration for the state |ψ⟩ is {k1,k2,⋯,km} with k1≥k2⋯≥km and ∑iki=n. Then from the Lemma 1 and the property (4) of M¨obius transformation, we have:

Assume |ψ⟩ is an n-qubit symmetric state, its degeneracy configuration is {k1,k2,⋯,km},m≥3, if there exists ki,kj and kl such that these three values are unequal to the residual elements in the set, then the stabilizer group for the state |ψ⟩ contains only the identity.

it is easy to see when an ILO g satisfies that |ϵ⟩ is an eignvector of g, g⊗n is the stabilizer for the state |ψ⟩. m=2: In this case, the state |ψ⟩ can be represented as

This case is invalid. Assume |ψ⟩ is an n-qubit symmetric pure state with its degeneracy configuration {k1,k2,⋯,km}, and we divide the degeneracy configuration into d parts according to whether ki are equal. Assume D is a set with its elements nj,j=1,2,⋯,d, here nj, j=1,2,⋯,d is the number of each part. Due to the above analysis, only when the M¨obius transformation f is represented as f{r,1}(r≥1,r∈Z+),f{r,r,⋯,rl<span class="mjx-char MJXc-TeX-main-R" style="padding-top: 0.446em; padding