Sphere packing bounds (SPBs) ---with prefactors that are polynomial in the block length--- are derived for codes on two families of memoryless channels using Augustin's method: (possibly non-stationary) memoryless channels with (possibly multiple) additive cost constraints and stationary memoryless channels with convex constraints on the composition (i.e. empirical distribution, type) of the input codewords. A variant of Gallager's inner bound is derived in order to show that these sphere packing bounds are tight in terms of the exponential decay rate of the error probability with the block length under mild hypotheses. 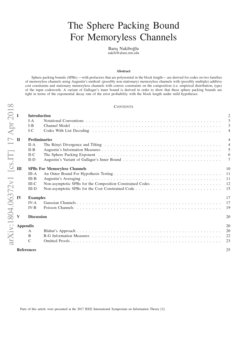 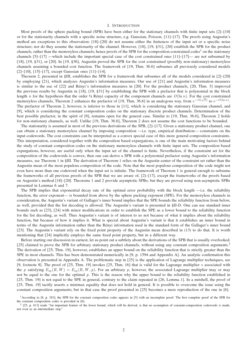 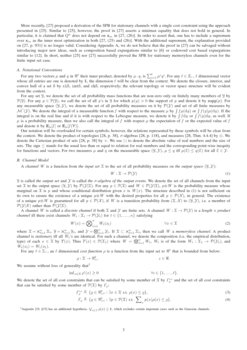 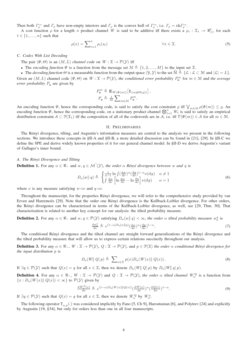 The stationarity is assumed in most of the previous derivations of the SPB, [2, 3, 4, 5, 6, 7, 8, 9, 10, 11, 12, 15, 16, 17, 18, 13, 14]. Given a stationary product channel, one can obtain a stationary memoryless channel by imposing composition —i.e. type, empirical distribution— constraints on the input codewords. The cost constraints can be interpreted as a convex special case of this more general composition constraints. This interpretation, considered together with the composition based expurgations, is one of the main motivating factors behind the study of constant composition codes on the stationary memoryless channels with finite input sets. The composition based expurgations, however, are useful only when the input set of the channel is finite. Nevertheless, if the constraint set for the composition of the codewords is convex, then one can derive a SPB with a polynomial prefactor using Augustin’s information measures, see Theorem 1 in §III. The derivation of Theorem 1 relies on the Augustin center of the constraint set rather than the Augustin mean of the most populous composition of the code. Note that the most populous composition of the code might not even have more than one codeword when the input set is infinite. The framework of Theorem 1 is general enough to subsume the frameworks of all previous proofs of the SPB for the memoryless of product channels that we are aware of, except the frameworks of the proofs based on Augustin’s method [19, 20, 21]. Theorems 1 and 2 provide asymptotic SPBs; but they are proved using non-asymptotic SPBs presented in Lemmas 9 and 10.

Before starting our discussion in earnest, let us point out a subtlety about the derivations of the SPB that is usually overlooked. [26] claimed to prove the SPB for arbitrary stationary product channels, without using any constant composition arguments.222[26, p. 413] reads “An important feature of the lower bound, which will be derived, is that no assumption of constant-composition codewords is made, not even as an intermediate step.” The derivation of [26, Thm. 19], however, establishes an upper bound on the reliability function that is strictly greater than the SPE in many channels. This has been demonstrated numerically in [12, p. 1594 and Appendix A]. An analytic confirmation this observation is presented in Appendix -A. The problematic step in [26] is the application of Lagrange multiplier techniques, see [12, footnote 8]. The proof of [26, Thm. 19] invokes [26, Thm. 16] that is valid for the Lagrange multiplier s associated with the p satisfying Esp(R,W)=Esp(R,W,p). For an arbitrary p, however, the associated Lagrange multiplier may or may not be equal to the one for the optimal p. This is the reason why the upper bound to the reliability function established in [26, Thm. 19] is not equal to the SPE in general, contrary to the claim repeated in [27, Lemma 1] and [28, Thm. 10.1.4]. In a nutshell, the proof of [26, Thm. 19] tacitly asserts a minimax equality that does not hold in general. For stationary memoryless channels with finite input alphabets, one can avoid this issue using the constant composition arguments. However, in that case the proof presented in [26] becomes a mere reproduction of the one in [9].

More recently, [29] proposed a derivation of the SPB for stationary channels with a single cost constraint using the approach presented in [26]. Similar to [26], however, the proof in [29] asserts a minimax equality that does not hold in general. In particular, it is claimed that Qn does not depend on xm in [29, (26)]. In order to assert that, one has to include a supremum over xm as the inner most optimization in both [29, (25) and (26)]. With the additional supremum, the explanation provided on [29, p. 931] is no longer valid. Considering Appendix -A, we do not believe that the proof in [29] can be salvaged without introducing major new ideas, such as composition based expurgations similar to [9] or codeword cost based expurgations similar to [16]. In short, neither [26] nor [29] successfully proved the SPB for stationary memoryless channels even for the finite input set case.

For any two vectors

μ and q in Rℓ their inner product, denoted by μ⋅q, is ∑ℓı=1μıqı. For any ℓ∈Z+, ℓ dimensional vector whose all entries are one is denoted by 1, the dimension ℓ will be clear from the context. We denote the closure, interior, and convex hull of a set S by clS, intS, and chS, respectively; the relevant topology or vector space structure will be evident from the context.

Our notation will be overloaded for certain symbols; however, the relations represented by these symbols will be clear from the context. We denote the Cartesian product of sets [30, p. 38] by ×. We use |⋅| to denote the absolute value of real numbers and the size of sets. The sign ≤ stands for the usual less than or equal to relation for real numbers and the corresponding point-wise inequity for functions and vectors. For two measures μ and q on the measurable space (Y,Y), μ≤q iff μ(E)≤q(E) for all E∈Y. We denote the product of topologies [30, p. 38], σ-algebras [30, p. 118], and measures [30, Thm. 4.4.4] by ⊗. We use the short hand Xn1 for the Cartesian product of sets X1,…,Xn and Yn1 for the product of the σ-algebras Y1,…,Yn.

A channel W is a function from the input set X to the set of all probability measures on the output space (Y,Y):

Y is called the output set and Y is called the σ-algebra of the output events. We denote the set of all channels from the input set X to the output space (Y,Y) by P(Y|X). For any p∈P(X) and W∈P(Y|X), is the probability measure whose marginal on X is p and whose conditional distribution given x is W(x). The structure described in (1) is not sufficient on its own to ensure the existence of a unique with the desired properties for all p∈P(X), in general. The existence of a unique is guaranteed for all p∈P(X), if W is a transition probability from (X,X) to (Y,Y), i.e. a member of P(Y|X) rather than P(Y|X).

A channel W is called a discrete channel if both X and Y are finite sets. For any n∈Z+ and channels Wt:Xt→P(Yt) for t∈{1,…,n}, the length n product channel W[1,n]:Xn1→P(Yn1) is defined via the following relation:

A channel U:Z→Yn1 is called a length n memoryless channel iff there exists a product channel W[1,n] satisfying both U(z)=W[1,n](z) for all z∈Z and Z⊂Xn1. A product channel is stationary iff Wt=W for all t∈{1,…,n} for some W:X→P(Y). For such a channel, we denote the composition (i.e. the empirical distribution, type) of each xn1∈Xn1 by Υ(x), where Υ(x)∈P(X).

For any ℓ∈Z+, an ℓ dimensional cost function ρ is a function from the input set to Rℓ that is bounded from below, i.e. that is of the form ρ:X→Rℓ≥z for some z∈R. We assume without loss of generality that333Augustin [20, §33] has an additional hypothesis, ⋁x∈Xρ(x)≤1, which excludes certain important cases such as the Gaussian channels.

A cost function on a product channel is said to be additive iff it can be written as the sum of cost functions defined on the component channels. Given Wt:Xt→P(Yt) and ρt:Xt→Rℓ≥0 for t∈{1,…,n}, we denote the resulting additive cost function on Xn1 for the channel W[1,n] by ρ[1,n], i.e.

The Rényi divergence, tilting, and Augustin’s information measures are central to the analysis we present in the following sections. We introduce these concepts in §II-A and §II-B, a more detailed discussion can be found in [22, 31]. In §II-C we define the SPE and derive widely known properties of it for our general channel model. In §II-D we derive Augustin’s variant of Gallager’s bound.

Ii-a The Rényi Divergence and Tilting

For any α∈R+ and w,q∈M+(Y), the order α Rényi divergence between w and q is

For properties of the Rényi divergence, throughout the manuscript, we will refer to the comprehensive study provided by van Erven and Harremoës [31]

[31, Thm. 30]. That characterization is related to another key concept for our analysis: the tilted probability measure.

The following operator Tα,p(⋅) was considered implicitly by Fano [8, Ch 9], Haroutunian [9], and Polytrev [25] and explicitly by Augustin [20, §34], but only for orders less than one in all four manuscripts.

For any α∈R+, W:X→P(Y), and p∈P(X) the order α Augustin information for the input distribution p is

For any α∈R+, W:X→P(Y), and A⊂P(X), the order α Augustin capacity of W for the constraint set A is

When the constraint set A is the whole P(X), we denote the order α Augustin capacity by Cα,W, i.e. Cα,W ≜ Cα,W,P(X).

If A is convex then the order of the supremum and the infimum can be changed as a result of [22, Thm. LABEL:C-thm:minimax]:

If in addition is finite, then [22, Thm. LABEL:C-thm:minimax] implies that there exists a unique probability measure qα,W,A, called the order α Augustin center of W for the constraint set A, satisfying

We denote the set of all probability mass functions satisfying a cost constraint ϱ by A(ϱ), i.e.

For the constraint sets defined through cost constraints we use the symbol Cα,W,ϱ rather than with a slight abuse of notation. In order to be able apply convex conjugation techniques without any significant modifications, we extend the definition Augustin capacity to the infeasible cost constraints, i.e. ϱ’s outside Γρ, as follows:

In order to characterize Cα,W,ϱ through convex conjugation techniques, we first define Augustin-Legendre (A-L) information and capacity. These concepts are first introduced in [1, §III-A] and [22, §LABEL:C-sec:cost-AL], as an extension of the analogous concepts in [11, Ch. 8].

For any α∈R+, channel W of the form W:X→P(Y) with a cost function ρ:X→Rℓ≥0, p∈P(X), and λ∈Rℓ≥0, the order α Augustin-Legendre information for the input distribution p and the Lagrange multiplier λ is

For any α∈R+, channel W of the form W:X→P(Y) with a cost function ρ:X→Rℓ≥0, and λ∈Rℓ≥0 the order α Augustin-Legendre (A-L) capacity for the Lagrange multiplier λ is

Then Cα,W,ϱ can be expressed in terms of Cλα,W at least for the interior points of Γρ:

Furthermore, there exists a non-empty convex, compact set of ’s satisfying Cα,W,ϱ=Cλα,W,ϱα,W+λα,W,ϱ⋅ϱ provided that Cα,W,ϱ is finite, by [22, Lemma LABEL:C-lem:Lcapacity].

Cλα,W satisfies a minimax relation similar to the one given in (16), see [22, Thm. LABEL:C-thm:Lminimax]. That minimax relation, however, is best understood via the concept of Augustin-Legendre radius defined in the following.

For any α∈R+, channel W:X→P(Y) with a cost function ρ:X→Rℓ≥0, and λ∈Rℓ≥0, the order α Augustin-Legendre radius of W for the Lagrange multiplier λ is

If in addition Cλα,W is finite, then there exits a unique qλα,W∈P(Y), called the order α Augustin-Legendre center of W for the Lagrange multiplier λ, satisfying