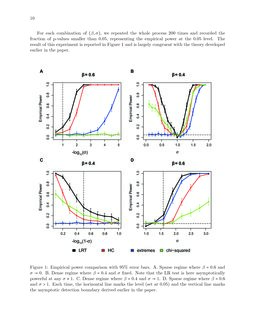 The detection of rare effects becomes important in settings where a small proportion of a population may be affected by a given treatment, for example. The situation is typically formalized as a contamination model. Although such models have a long history (e.g., in the theory of robust statistics), we adopt the perspective of Ingster [5] and Donoho and Jin [4], who consider such models in asymptotic regimes where the contamination proportion tends to zero at various rates. This line of work has mostly focused on models where the effect is a shift in mean, with some rare exceptions [2, 3]. In this paper, instead, we model the effect as a change in variance.

We consider the following contamination model:

is the standard deviation of the contaminated component. (Note that this is a Gaussian mixture model with two components.) Following

[5, 4], we consider the following hypothesis testing problem: based on X1,…,Xn drawn iid from (1), decide

The testing problem (2) was partially addressed by Cai, Jeng, and Jin [3]

, who consider a contamination model where the effect manifests itself as a shift in mean and a change in variance. However, in their setting the variance is fixed, while we let the variance change with the sample size in an asymptotic analysis that is now standard in this literature.

In the tradition of Ingster [5], we set

is uninteresting since in that case there is no contamination with probability tending to 1.)

We start with bounding the performance of the likelihood ratio test. As this is the most powerful test by the Neyman-Pearson Lemma, this bound also applies to any other test. We say that a testing procedure is asymptotically powerless if the sum of its probabilities of Type I and Type II errors (its risk) has limit inferior at least 1 in the large sample asymptote.

Consider the testing problem (2) in the regime where σ=σn→0 as n→∞. More specifically, we adopt the following parameterization as it brings into focus the first-order asymptotics:

For the testing problem (2) with parameterization (4) and (5), the likelihood ratio test (and then any other test procedure) is asymptotically powerless when

The likelihood ratio is

where Li is the likelihood ratio for observation Xi, which in this case is

The risk of the likelihood ratio test is equal to

Our goal is to show that risk(L)=1+o(1) under the stated conditions. When σ is below and bounded away from √2

and we are left with the task of finding conditions under which E0[L2]≤1+o(1).

Plugging in the parameterization (4) and (5), we immediately see that this condition is fulfilled when (6) holds, and this concludes the proof. ∎

Consider the testing problem (2) in the regime where σ2→1. More specifically, we adopt the following parameterization:

For the testing problem (2) with parameterization (4) and (19), the likelihood ratio test (and then any other test procedure) is asymptotically powerless when

Consider the testing problem (2) in the regime where σ is fixed away from 0 and 1. (Some of the results developed in this section are special cases of results in [3].)

For the testing problem (2) with parameterization (4) and σ>0 is fixed, the likelihood ratio test (and therefore any other test) is asymptotically powerless when β>1/2 and

Using the triangle inequality, the fact that ¯L≤L, and the Cauchy-Schwarz Inequality, we have the following upper bound:

For the first moment, we have

For the second moment, we have

Having studied the performance of the likelihood ratio test, we now turn to studying the performance of the chi-squared test, the extremes test, and the higher criticism test. These tests are more practical in that they do not require knowledge of the parameters driving the alternative, (ε,σ), to be implemented.

The chi-squared test is the classical variance test. It happens to only be asymptotically powerful in the dense regime when σ is bounded away from 1.

We divide the proof into the two regimes.

Dense regime (β<1/2). We show that there is a chi-squared test that is asymptotically powerful when β<1/2. To do so, we use Chebyshev’s inequality. Under H0, W:=∑ni=1X2i

has the chi-squared distribution with

ndegrees of freedom. But using only the fact that E0(W)=n and Var0(W)=2n, by Chebyshev’s inequality, we have

We choose an=logn and consider the test with rejection region {|W−n|≥an√n}. This test is asymptotically powerful when, eventually,

Sparse regime (β>1/2). To prove that the chi-squared procedure is asymptotically powerless when β>1/2, we argue in terms of convergence in distribution rather than the simple bounding of moments. Under H0

(W−n)/√2n converges weakly to the standard normal distribution. Under H1, the same is true using the Lyapunov Central Limit Theorem for triangular arrays. Indeed, even though the distribution of X1,…,Xn depends on (n,ε), uniformly

so that (W−E1(W))/√Var1(W) converges weakly to the standard normal distribution. Since

it is also the case that (W−n)/√2n converges weakly to the standard normal distribution. Hence, there is no test based on W that has any asymptotic power. ∎

Similarly, as is well-known,

We thus consider the test with rejection region {mini|Xi|≤1/nlogn}∪{maxi|Xi|≥√2logn}.

We now consider the alternative. We first consider the case where (5) holds. We focus on the main sub-case where, in addition, γ<1. Let I⊂{1,…,n} index the contaminated observations, meaning those sampled from N(0,σ2). In our mixture model, |I| is binomial with parameters (n,ε). Let Z1,…,Zn be iid standard normal variables and set bn=σnlogn. We have

This in turn implies that

For the minimum, we have

and, as was derived above,

since εcn/σ≍n−1−β+γ=o(1/n). Thus, P1(mini|Xi|≤cn)→0. And since maxi|Xi| under the alternative is stochastically bounded from above by its distribution under the null (since σ<1), we also have P1(maxi|Xi|≥dn)→0. Hence, the extremes test (at level α arbitrary) has asymptotic power α, meaning it is asymptotically powerless. (It is no better than random guessing.)

Next, we consider the case where σ is fixed. Following similar arguments, now with bn=σ−1√2logn, we have

Using a similar line of arguments, it can also be shown that the test is asymptotically powerless when σ<1/√1−β is fixed. ∎

The higher criticism, which looks at the entire sample via excursions of its empirical process, happens to achieve the detection boundary in all regimes, and is thus (first-order) comparable to the likelihood ratio test while being adaptive to the model parameters.

Let H denote the higher criticism statistic (3). Jaeschke [6] derived the asymptotic distribution of H under the null, and this weak convergence result in particular implies that

For simplicity, because it is enough for our purposes, we consider the test with rejection region {H≥logn}. Note that the test is asymptotically powerful if, under the alternative, there is tn≥0 such that

with probability tending to 1. To establish this, we will apply Chebyshev’s inequality. Indeed, Fn(t) is binomial with parameters n and Λ(t):=(1−ε)Ψ(t)+εΨ(t/σ), so that

with probability tending to 1. When this is the case, we have

and only need to prove that

and therefore (70) is fulfilled, eventually.

and therefore (70) is fulfilled, eventually.

The same arguments apply to the case where β<1/2 and σ≠1 is fixed. (It essentially corresponds to the previous case with γ=0.)

and therefore (70) is fulfilled, eventually. ∎

We performed some numerical experiments to investigate the finite sample performance of the tests considered here: the likelihood ratio test, the chi-squared test, the extremes test, the higher criticism test. The sample size n was set large to 105 in order to capture the large-sample behavior of these tests. We tried four scenarios with different combinations of (β,σ). The p-values for each test are calibrated as follows:

For each combination of (β,σ), we repeated the whole process 200 times and recorded the fraction of p-values smaller than 0.05, representing the empirical power at the 0.05 level. The result of this experiment is reported in Figure 1 and is largely congruent with the theory developed earlier in the paper.