The Shadows of a Cycle Cannot All Be Paths

A "shadow" of a subset S of Euclidean space is an orthogonal projection of S into one of the coordinate hyperplanes. In this paper we show that it is not possible for all three shadows of a cycle (i.e., a simple closed curve) in R^3 to be paths (i.e., simple open curves). We also show two contrasting results: the three shadows of a path in R^3 can all be cycles (although not all convex) and, for every d≥ 1, there exists a d-sphere embedded in R^d+2 whose d+2 shadows have no holes (i.e., they deformation-retract onto a point). 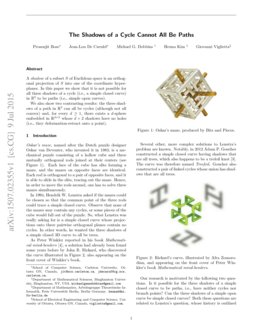 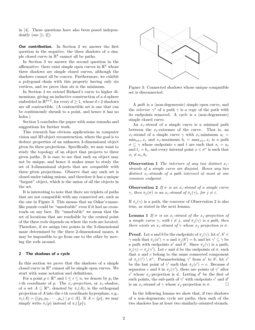 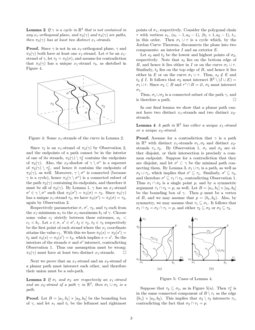 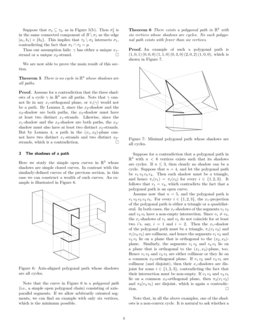 Oskar’s maze, named after the Dutch puzzle designer Oskar van Deventer, who invented it in 1983, is a mechanical puzzle consisting of a hollow cube and three mutually orthogonal rods joined at their centers (see Figure 1). Each face of the cube has slits forming a maze, and the mazes on opposite faces are identical. Each rod is orthogonal to a pair of opposite faces, and it is able to slide in the slits, tracing out the maze. Hence, in order to move the rods around, one has to solve three mazes simultaneously.

In 1994, Hendrik W. Lenstra asked if the mazes could be chosen so that the common point of the three rods could trace a simple closed curve. Observe that none of the mazes may contain any cycles, or some pieces of the cube would fall out of the puzzle. So, what Lenstra was really asking for is a simple closed curve whose projections onto three pairwise orthogonal planes contain no cycles. In other words, he wanted the three shadows of a simple closed 3D curve to all be trees.

As Peter Winkler reported in his book Mathematical mind-benders [4], a solution had already been found some years before by John R. Rickard, who discovered the curve illustrated in Figure 2, also appearing on the front cover of Winkler’s book.

Several other, more complex solutions to Lenstra’s problem are known. Notably, in 2012 Adam P. Goucher constructed a simple closed curve having shadows that are all trees, which also happens to be a trefoil knot [3]. The curve was therefore named Treefoil. Goucher also constructed a pair of linked cycles whose union has shadows that are all trees.

Our research is motivated by the following two questions. Is it possible for the three shadows of a simple closed curve to be paths, i.e., have neither cycles nor branch points? Can the three shadows of a simple open curve be simple closed curves? Both these questions are related to Lenstra’s question, whose history is outlined in [4]. These questions have also been posed independently (see [1, 2]).

In Section 2 we answer the first question in the negative: the three shadows of a simple closed curve in R3 cannot all be paths.

In Section 3 we answer the second question in the affirmative: there exist simple open curves in R3 whose three shadows are simple closed curves, although the shadows cannot all be convex. Furthermore, we exhibit a polygonal chain with this property having only six vertices, and we prove that six is the minimum.

In Section 4 we extend Rickard’s curve to higher dimensions, giving an inductive construction of a d-sphere embedded in Rd+2, for every d≥1, whose d+2 shadows are all contractible. (A contractible set is one that can be continuously shrunk to a point, and hence it has no holes.)

Section 5 concludes the paper with some remarks and suggestions for further work.

This research has obvious applications in computer vision and 3D object reconstruction, where the goal is to deduce properties of an unknown 3-dimensional object given its three projections. Specifically, we may want to study the topology of an object that projects to three given paths. It is easy to see that such an object may not be unique, and hence it makes sense to study the set of 3-dimensional objects that are

compatible with three given projections. Observe that any such set is closed under taking unions, and therefore it has a unique “largest” object, which is the union of all the objects in the set.

It is interesting to note that there are triplets of paths that are not compatible with any connected set, such as the one in Figure 3. This means that an Oskar’s-maze-like puzzle could be “unsolvable” even if it had no crossroads on any face. By “unsolvable” we mean that the set of locations that are reachable by the central point of the three rods depends on where the rods are located. Therefore, if we assign two points in the 3-dimensional maze determined by the three 2-dimensional mazes, it may be impossible to go from one to the other by moving the rods around.

2 The shadows of a cycle

In this section we prove that the shadows of a simple closed curve in R3 cannot all be simple open curves. We start with some notation and definitions.

In the following lemma we show that, if two shadows of a non-degenerate cycle are paths, then each of the two shadows has at least two similarly-oriented strands.

Next we prove that an x1-strand and an x2-strand of a planar path must intersect each other, and therefore their union must be a sub-path.

Thus, σ1∪σ2 is a connected subset of the path γ, and is therefore a path.

A path in R2 has either a unique x1-strand or a unique x2-strand. Assume for a contradiction that γ is a path in R2 with distinct x1-strands σ1,σ2 and distinct x2-strands τ1,τ2. By Observation 2, σ1 and σ2 are either disjoint, or their intersection is precisely a common endpoint. Suppose for a contradiction that they are disjoint, and let σ′⊂γ be the minimal path connecting them. By Lemma 2, σ1∪τ1 is a path, as well as σ2∪τ1, which implies that σ′⊆τ1. Similarly, σ′⊆τ2, and therefore σ′⊆τ1∩τ2, contradicting Observation 2. Thus σ1∩σ2 is a single point p, and by a symmetric argument τ1∩τ2=p, as well. Let B=[a1,b1]×[a2,b2] be the bounding box of γ. Then p must be a vertex of B, and we may assume that p=(b1,b2). Also, by symmetry, we may assume that τ1⊆σ1. It follows that σ1∩τ2=σ2∩τ1=p, and either τ2⊆σ2 or σ2⊆τ2.

Suppose that τ2⊆σ2, as in Figure 5. Then τ∘2 is in the same connected component of B∖τ1 as the edge {b1}×[a2,b2). This implies that σ2∖τ2 intersects τ1, contradicting the fact that σ2∩τ1=p.

Suppose that σ2⊆τ2, as in Figure 5. Then σ∘2 is in the same connected component of B∖σ1 as the edge [a1,b1)×{b2}. This implies that τ2∖σ2 intersects σ1, contradicting the fact that σ1∩τ2=p.

Thus our assumption fails: γ has either a unique x1-strand or a unique x2-strand.

We are now able to prove the main result of this section.

3 The shadows of a path

Here we study the simple open curves in R3 whose shadows are simple closed curves. In contrast with the similarly-defined curves of the previous section, in this case we can construct a wealth of such curves. An example is illustrated in Figure 6.

Note that the curve in Figure 6 is a polygonal path (i.e., a simple open polygonal chain) consisting of axis-parallel segments. If we allow arbitrarily oriented segments, we can find an example with only six vertices, which is the minimum possible.

Note that, in all the above examples, one of the shadows is a non-convex cycle. It is natural to ask whether a path exists whose shadows are all convex cycles. In the following theorem, we answer in the negative. (Due to space constraints, we only give a sketch of the proof.)

The intersection of Γ1 and Γ2 is sketched in Figure 8. It consists of two horizontal axis-aligned rectangles R1 and R2 (assuming that the vertical direction is x3-parallel) whose vertices are joined by four paths σ1, σ2, σ3, and σ4. The rectangles R1 and R2 may be degenerate, i.e., they may be x1-parallel or x2-parallel segments, or points. Let a horizontal plane intersect the interior of the path σi in the point si, for each i∈{1,2,3,4}. Then, for all i∈{1,2,3,4}, either si∈γ or si+1∈γ, where indices are taken modulo 4.

Further intersecting Γ1∩Γ2 with Γ3, we reduce R1 and R2 to at most four horizontal curves each. Therefore, in total we have n≤12 curves, whose union is an embedding in R3 of a graph G with n edges. Also, we may assume without loss of generality that each endpoint of γ lies at a vertex of the embedding of G, or at the midpoint of one of the n edges. Hence there are only finitely many possible graphs G to consider, and only finitely many choices of γ in each graph embedding. By exhaustively examining all the possible choices of γ, we conclude that none of them has shadows that are all convex cycles. □

In this section we generalize Rickard’s curve to higher dimensions. We inductively construct an embedding of a d-sphere in Rd+2 whose d+2 shadows are all contractible, i.e., they deformation-retract to a point.

For every d≥1, there exists an embedding of a d-sphere in Rd+2 whose shadows are all contractible. Let S1 be Rickard’s curve, introduced in Section 1. Then, for all d≥1, we inductively define

It is easy to see that Sd is an embedding of a d-sphere in Rd+2 for every d≥1. We claim that all the shadows of Sd deformation-retract to the point {0}d+1. This is true for d=1, as suggested by Figure 2. Assume now the inductive hypothesis that the claim is true for Sd, and therefore there exists a continuous map

If 1≤i≤d+2, we first define the auxiliary map

Hence all the shadows of the d-sphere Sd deformation-retract to a point for every d≥1, meaning that they are contractible.

In this paper we studied the shadows of curves in R3 (a shadow being an axis-parallel projection), also settling some long-standing open problems posed in [1, 2].

In Section 2 we proved that there is no cycle in R3 whose shadows are all paths. Note that by applying a projective transformation, we may equivalently define shadows to be perspective projections, provided that the three viewpoints are not collinear, and the plane through them does not intersect the curve.

Finally, in Section 4 we showed that there exists an embedding of a d-sphere in Rd+2 whose shadows are all contractible, for every d≥1. This generalizes Rickard’s curve (see Figure 2), which is a cycle in R3 whose shadows contain no cycles.

Our results can be expanded in several directions. A natural goal would be to minimize the total number of branch points of the shadows of a cycle in R3, assuming that all shadows are cycle-free. Because each shadow of Rickard’s curve has two branch points, such a minimum is at most six. On the other hand, by Theorem 2, the minimum is at least one. With the same proof technique employed in Section 2, we can prove the following generalized version of Theorem 2, which implies that the minimum number of branch points of the shadows must be at least three.

There is no cycle γ in R3 with cycle-free shadows such that π1(γ) is a path, and π2(γ) and π3(γ) have at most one branch point each. □ We conjecture Rickard’s curve to be an optimal example in terms of branch points of its shadows.

If the shadows of a cycle in R3 are all cycle-free, then each shadow has at least two branch points.

Prosenjit Bose and Jean-Lou De Carufel were supported in part by NSERC.

Michael G. Dobbins was supported by NRF grant 2011-0030044 (SRC-GAIA) funded by the government of South Korea.

Heuna Kim was supported by the Deutsche Forschungsgemeinschaft within the research training group “Methods for Discrete Structures” (GRK 1408).