A recently proposed authenticated key agreement protocol is shown to be insecure. In particular, one of the two parties is not authenticated, allowing an active man in the middle opponent to replay old messages. The protocol is essentially an authenticated Diffie-Hellman key agreement scheme, and the lack of authentication allows an attacker to replay old messages and have them accepted. Moreover, if the ephemeral key used to compute a protocol message is ever compromised, then the key established using the replayed message will also be compromised. Fixing the problem is simple - there are many provably secure and standardised protocols which are just as efficient as the flawed scheme. 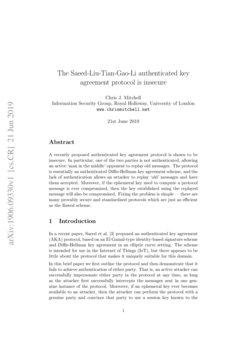 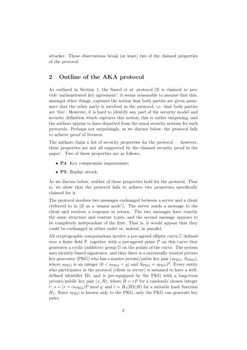 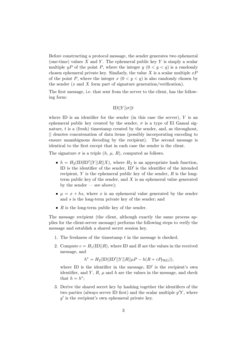 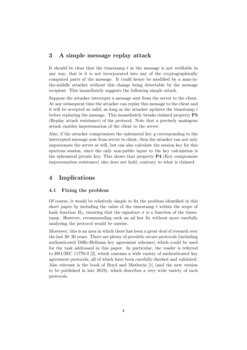 In this paper, a new key agreement protocol is presented. The protocol u...
Abdelhaliem Babiker, et al. ∙

Multiparty Quantum Key Agreement That is Secure Against Collusive Attacks

A comprehensive secure protocol for all D2D scenarios

A recently proposed authenticated key agreement protocol is shown to be insecure. In particular, one of the two parties is not authenticated, allowing an active ‘man in the middle’ opponent to replay old messages. The protocol is essentially an authenticated Diffie-Hellman key agreement scheme, and the lack of authentication allows an attacker to replay ‘old’ messages and have them accepted. Moreover, if the ephemeral key used to compute a protocol message is ever compromised, then the key established using the replayed message will also be compromised. Fixing the problem is simple — there are many provably secure and standardised protocols which are just as efficient as the flawed scheme.

In a recent paper, Saeed et al. [3] proposed an authenticated key agreement (AKA) protocol, based on an El Gamal-type identity-based signature scheme and Diffie-Hellman key agreement in an elliptic curve setting. The scheme is intended for use in the Internet of Things (IoT), but there appears to be little about the protocol that makes it uniquely suitable for this domain.

2 Outline of the AKA protocol

As outlined in Section 1, the Saeed et al. protocol [3] is claimed to provide ‘authenticated key agreement’; it seems reasonable to assume that this, amongst other things, captures the notion that both parties are given assurance that the other party is involved in the protocol, i.e. that both parties are ‘live’. However, it is hard to identify any part of the security model and security definition which captures this notion; this is rather surprising, and the authors appear to have departed from the usual security notions for such protocols. Perhaps not surprisingly, as we discuss below, the protocol fails to achieve proof of liveness.

As we discuss below, neither of these properties hold for the protocol. That is, we show that the protocol fails to achieve two properties specifically claimed for it.

The protocol involves two messages exchanged between a server and a client (referred to in [3] as a ‘sensor node’). The server sends a message to the client and receives a response in return. The two messages have exactly the same structure and content types, and the second message appears to be completely independent of the first. That is, it would appear that they could be exchanged in either order or, indeed, in parallel.

All cryptographic computations involve a pre-agreed elliptic curve C defined over a finite field F, together with a pre-agreed point P on this curve that generates a cyclic (additive) group G on the points of the curve. The system uses identity-based signatures, and thus there is a universally trusted private key generator (PKG) who has a master private/pubic key pair (sPKG, SPKG), where sPKG is an integer (0<sPKG<q) and SPKG=sPKGP. Every entity who participates in the protocol (client or server) is assumed to have a well-defined identifier ID, and is pre-equipped by the PKG with a long-term private/public key pair (s, R), where R=rP for a randomly chosen integer r; s=(r+csPKG)Pmodq; and c=H1(ID||R) for a suitable hash function H1. Since sPKG is known only to the PKG, only the PKG can generate key pairs.

Before constructing a protocol message, the sender generates two ephemeral (one-time) values X and Y. The ephemeral public key Y is simply a scalar multiple yP of the point P, where the integer y (0<y<q) is a randomly chosen ephemeral private key. Similarly, the value X is a scalar multiple xP of the point P, where the integer x (0<y<q) is also randomly chosen by the sender (x and X form part of signature generation/verification).

The first message, i.e. that sent from the server to the client, has the following form:

where ID is an identifier for the sender (in this case the server), Y is an ephemeral public key created by the sender, σ is a type of El Gamal signature, t is a (fresh) timestamp created by the sender, and, as throughout, || denotes concatenation of data items (possibly incorporating encoding to ensure unambiguous decoding by the recipient). The second message is identical to the first except that in each case the sender is the client.

The signature σ is a triple (h, μ, R), computed as follows.

The message recipient (the client, although exactly the same process applies for the client-server message) performs the following steps to verify the message and establish a shared secret session key.

It should be clear that the timestamp t in the message is not verifiable in any way, that is it is not incorporated into any of the cryptographically computed parts of the message. It could hence be modified by a man-in-the-middle attacker without this change being detectable by the message recipient. This immediately suggests the following simple attack.

Suppose the attacker intercepts a message sent from the server to the client. At any subsequent time the attacker can replay this message to the client and it will be accepted as valid, as long as the attacker updates the timestamp t before replaying the message. This immediately breaks claimed property P5 (Replay attack resistance) of the protocol. Note that a precisely analogous attack enables impersonation of the client to the server.

Also, if the attacker compromises the ephemeral key y corresponding to the intercepted message sent from server to client, then the attacker can not only impersonate the server at will, but can also calculate the session key for this spurious session, since the only non-public input to the key calculation is the ephemeral private key. This shows that property P4 (Key compromise impersonation resistance) also does not hold, contrary to what is claimed.

Of course, it would be relatively simple to fix the problem identified in this short paper by including the value of the timestamp t within the scope of hash function H2, ensuring that the signature σ is a function of the timestamp. However, recommending such an ad hoc fix without more carefully analysing the protocol would be unwise.

Moreover, this is an area in which there has been a great deal of research over the last 20–30 years. There are plenty of provably secure protocols (including authenticated Diffie-Hellman key agreement schemes) which could be used for the task addressed in this paper. In particular, the reader is referred to ISO/IEC 11770-3 [2], which contains a wide variety of authenticated key agreement protocols, all of which have been carefully checked and validated. Also relevant is the book of Boyd and Mathuria [1] (and the new version to be published in late 2019), which describes a very wide variety of such protocols.

There are a number of other serious issues with this paper, including the following.