The Role of Phonetic Units in Speech Emotion Recognition 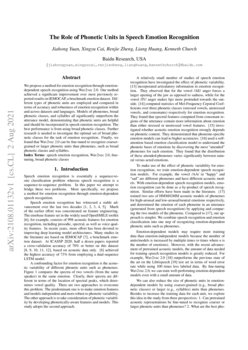 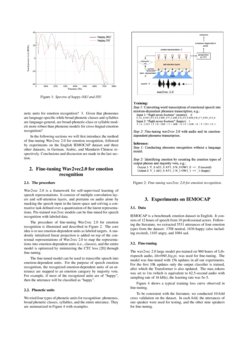 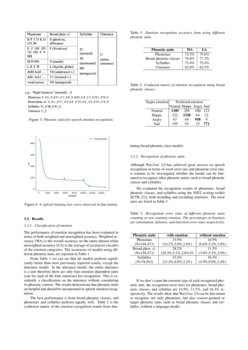 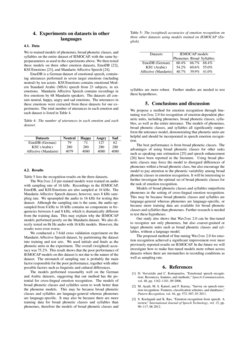 , for example, consists of 998 acoustic features for emotion recognition, including prosodic, spectral, as well as voice quality features. In recent years, more effort has been devoted to improving deep learning model architectures. Many studies in the literature are based on IEMOCAP

[busso2008iemocap], a benchmark emotion dataset. At ICASSP 2020, half a dozen papers reported a cross-validation accuracy of 70% or better on this dataset [wangetal, liuetal, luetal, Pappagarietal, Yehetal], based on acoustic data only. [wangetal] achieved the highest accuracy of 73% from employing a dual-sequence LSTM model.

A confounding factor for emotion recognition is the acoustic variability of different phonetic units such as phonemes. Figure 1 compares the spectra of two vowels (from the same speaker) in the same emotion. Clearly, their spectra are different in terms of the location of spectral peaks, which determines vowel quality. There are two approaches to overcome this problem. The predominant one is to make emotion features and models independent and more robust to phonetic variability. The other approach is to take consideration of phonetic variability by developing phonetically-aware features and models. This study adopts the second approach.

A relatively small number of studies of speech emotion recognition have investigated the effect of phonetic variability. [Shahetal] incorporated articulatory information in emotion recognition. They observed that for the vowel /AE/ anger forces a larger opening of the jaw as opposed to sadness, while for the vowel /IY/ anger makes lips more protruded towards the outside. [Bitouketal] computed statistics of Mel-Frequency Cepstral Coefficients over three phonetic classes (stressed vowels, unstressed vowels, and consonants) respectively for emotion recognition. They found that spectral features computed from consonant regions of the utterance contain more information about emotion than either stressed or unstressed vowel features. [Schulleretal] investigated whether acoustic emotion recognition strongly depends on phonetic content. They demonstrated that phoneme-specific emotion models can lead to higher accuracies. [Dhamyal2020ThePB] used a self-attention based emotion classification model to understand the phonetic bases of emotions by discovering the most “attended” phonemes for each emotion. They found that the distribution of these attended-phonemes varies significantly between natural versus acted emotions.

Emotion-dependent models may require more training data than emotion-independent models because the number of units/models is increased by multiple times (n times where n is the number of emotions). However, with the recent advancement of pretrained acoustic models, the amount of data needed for training speech recognition models is greatly reduced. For example, Wav2vec 2.0 [baevski2020wav2vec] outperforms the previous state of the art on the Librispeech [panayotov2015librispeech] test set in terms of word error rate while using 100 times less labeled data. By fine-tuning Wav2vec 2.0, we can train well-performing emotion-dependent models even with a small amount of data.

We can also reduce the size of phonetic units in emotion-dependent models by using coarser-grained (e.g., broad phonetic classes) or larger (e.g., syllables) units than phonemes. Besides to increase the training data for each unit, we explore this idea in the study from three perspectives: 1. Can pretrained acoustic representations be fine-tuned to recognize coarser or larger phonetic units than phonemes? 2. What are the best phonetic units for emotion recognition? 3. Given that phonemes are language-specific while broad phonetic classes and syllables are language-general, are broad-phonetic-class or syllable models more robust than phoneme models for cross-lingual emotion recognition?

In the following sections we will first introduce the method of fine-tuning Wav2vec 2.0 for emotion recognition, followed by experiments on the English IEMOCAP dataset and three other datasets, in German, Arabic, and Mandarin Chinese respectively. Conclusions and discussion are made in the last section.

Wav2vec 2.0 is a framework for self-supervised learning of speech representations. It consists of multiple convolution layers and self-attention layers, and pretrains on audio alone by masking the speech input in the latent space and solving a contrastive task defined over a quantization of the latent representations. Pre-trained wav2vec models can be fine-tuned for speech recognition with labeled data.

The procedure of fine-tuning Wav2vec 2.0 for emotion recognition is illustrated and described in Figure 2. The core idea is to use emotion-dependent units as labeled targets. A randomly initialized linear projection is added on top of the contextual representations of Wav2vec 2.0 to map the representations into emotion-dependent units (i.e., classes), and the entire model is optimized by minimizing the CTC loss [graves2006connectionist] through fine-tuning.

We tried four types of phonetic units for recognition: phonemes, broad phonetic classes, syllables, and the entire utterance. They are summarized in Figure 4 with examples.

IEMOCAP is a benchmark emotion dataset in English. It consists of 12 hours of speech from 10 professional actors. Following the literature, we extracted 5531 utterances of four emotion types from the dataset: 1708 neutral, 1636 happy (also including excited), 1103 angry, and 1084 sad.

The wav2vec 2.0 large model pre-trained on 960 hours of Librispeech audio, libri960_big.pt, was used for fine-tuning. The model was fine-tuned with 15k updates in all our experiments. For the first 10k updates only the output classifier is trained, after which the Transformer is also updated. The max_tokens was set to 1m (which is equivalent to 62.5-second audio with sampling rate of 16 kHz), the learning rate was 5e-5.

To be consistent with the literature, we conducted 10-fold cross validation on the dataset. In each fold, the utterances of one speaker were used for testing, and the other nine speakers for fine-tuning.

The best performance is from broad phonetic classes, and phonemes and syllables perform equally well. Table 2

is the confusion matrix of the emotion recognition results from fine-tuning broad phonetic class models.

Although Wav2vec 2.0 has achieved great success on speech recognition in terms of word error rate and phoneme error rate, it remains to be investigated whether the model can be fine-tuned to recognize other phonetic unites such as broad phonetic classes and syllables.

We evaluated the recognition results of phonemes, broad phonetic classes, and syllables using the NIST scoring toolkit SCTK [SCTK], both including and excluding emotions. The error rates are listed in Table 3.

4 Experiments on datasets in other languages

We re-trained models of phonemes, broad phonetic classes, and syllables on the entire dataset of IEMOCAP, with the same hyperparameters as used in the experiments above. We then tested these models on three other emotion datasets, EmoDB

EmoDB is a German dataset of emotional speech, containing utterances performed in seven target emotions (including neutral) by ten actors. KSUEmotions contains emotional Modern Standard Arabic (MSA) speech from 23 subjects, in six emotions. Mandarin Affective Speech contains recordings in five emotions by 68 Mandarin speakers. The datasets all contain neutral, happy, angry and sad emotions. The utterances in these emotions were extracted from these datasets for our experiments. The total number of utterances in each emotion and each dataset is listed in Table 4.

Table 5 lists the recognition results on the three datasets.

The Wav2vec 2.0 pre-trained models were trained on audio with sampling rate of 16 kHz. Recordings in the IEMOCAP, EmoDB, and KSUEmotions are also sampled at 16 kHz. The Mandarin Affective Speech dataset, however, uses 8 kHz sampling rate. We upsampled the audio to 16 kHz for testing this dataset. Although the sampling rate is the same, the audio upsampled from 8 kHz to 16 kHz contains no components in frequencies between 4 and 8 kHz, which is dramatically different from the training data. This may explain why the IEMOCAP models performed poorly on the Mandarin dataset. We also directly tested on 8k Hz audio with 16 kHz models. However, the results were even worse.

We conducted a 7-fold cross validation experiment on the Mandarin Affective Speech dataset, by partitioning the dataset into training and test sets. We used initials and finals as the phonetic units in the experiment. The overall (weighted) accuracy was 75.2%. This result shows that the poor performance of IEMOCAP models on this dataset is not due to the nature of the dataset. The mismatch of sampling rate is probably the main factor responsible for the poor performance, together with other possible factors such as linguistic and cultural differences.

Our study also shows that Wav2vec 2.0 can be fine-tuned to recognize not only phonemes, but also coarser-grained or larger phonetic units such as broad phonetic classes and syllables, without a language model.

The proposed method of fine-tuning Wav2vec 2.0 for emotion recognition achieved a significant improvement over most previously reported results on IEMOCAP. In the future we will investigate how to make fine-tuned models more robust across datasets where there are mismatches in recording conditions as well as sampling rate.