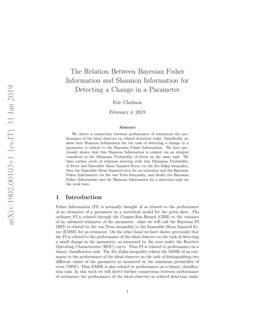 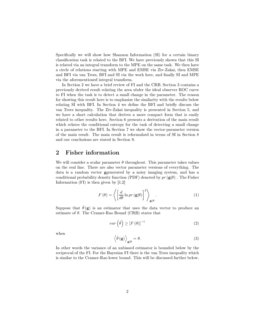 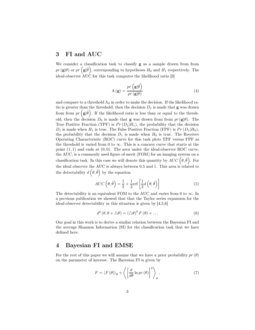 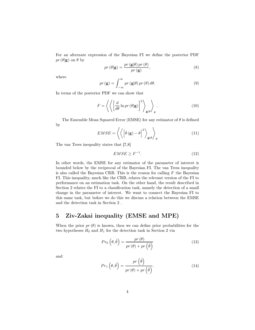 Probability of Error for Detecting a Change in a Parameter, Total Variation of the Posterior Distribution, and Bayesian Fisher Information

How many samples are needed to reliably approximate the best linear estimator for a linear inverse problem?

The Fisher information have connections with the standard deviation and ...
Tomohiro Nishiyama, et al. ∙

Nonparametric Estimation of the Fisher Information and Its Applications

This paper considers the problem of estimation of the Fisher information...
Wei Cao, et al. ∙

In this paper we study the intrinsic tradeoff between the space complexi...
Seth Pettie, et al. ∙

In Section 2 we have a brief review of FI and the CRB. Section 3 contains a previously derived result relating the area ubder the ideal observer ROC curve to FI when the task is to detect a small change in the parameter. The reason for showing this result here is to emphasize the similarity with the results below relating SI with BFI. In Section 4 we define the BFI and briefly discuss the van Trees inequality. The Ziv-Zakai inequality is presented in Section 5, and we have a short calculation that derives a more compact form that is easily related to other results here. Section 6 presents a derivation of the main result which relates the conditional entropy for the task of detecting a small change in a parameter to the BFI. In Section 7 we show the vector-parameter version of the main result. The main result is reformulatd in terms of SI in Section 8 and our conclusions are stated in Section 9.

We will consider a scalar parameter θ throughout. This parameter takes values on the real line. There are also vector parameter versions of everything. The data is a random vector g

generated by a noisy imaging system, and has a conditional probability density function (PDF) denoted by

Suppose that ^θ(g) is an estimator that uses the data vector to produce an estimate of θ. The Cramer-Rao Bound (CRB) states that

In other words the variance of an unbiased estimator is bounded below by the reciprocal of the FI. For the Bayesian FI there is the van Trees inequality which is similar to the Cramer-Rao lower bound. This will be discussed further below.

We consider a classification task to classify

g as a sample drawn from from pr(g|θ) or pr(g|~θ), corresponding to hypotheses H0 and H1 respectively. The ideal-observer AUC for this task computes the likelihood ratio [3]

The detectability is an equivalent FOM to the AUC and varies from 0 to ∞. In a previous publication we showed that that the Taylor series expansion for the ideal-observer detectability in this situation is given by [4,5,6]

Our goal in this work is to derive a similar relation between the Bayesian FI and the average Shannon Information (SI) for the classification task that we have defined here.

pr(θ) on the parameter of interest. The Bayesian FI is given by

In terms of the posterior PDF we can show that

The van Trees inequality states that [7,8]

In other words, the EMSE for any estimator of the parameter of interest is bounded below by the reciprocal of the Bayesian FI. The van Tress inequality is also called the Bayesian CRB. This is the reason for calling F the Bayesian FI. This inequality, much like the CRB, relates the relevant version of the FI to performance on an estimation task. On the other hand, the result described in Section 2 relates the FI to a classification task, namely the detection of a small change in the parameter of interest. We want to connect the Bayesian FI to this same task, but before we do this we discuss a relation between the EMSE and the detection task in Section 2 .

When the prior pr(θ) is known, then we can define prior probabilities for the two hypotheses H0 and H1 for the detection task in Section 2 via

Then the minimum probabilty of error Pe(θ,~θ) on the this detection task is the probability of error for the ideal observer when the threshold used for the likelihood ratio is given by

The minimum probability of error is Pe(θ,~θ)=(FPF)Pr0+(1−TPF)Pr1 since 1−TPF is the False Negative Fraction (FNF) Pr(D0|H1). Of course, in this expression, TPF and FPF also depend on the pair (θ,~θ). The Ziv-Zakai inequality, in its standard form, states that [9,10]

We will show that this inequality can be written in an alternate form which connects it to the classification task in Section 2. We start with the substitution ~θ=θ+x so that we have

Interchanging the order of integration we have

Now we note that Pe(θ,~θ)=Pe(~θ,θ) since the two tasks described by the pairs (θ,~θ) and (~θ,θ) are the same task. Therefore we may interchange the variables θ and ~θ and use the symmetry of all of the functions in the integrand to arrive at

We separate the right hand side into two integrals and again use the symmetry in θ and ~θ to find out that the two integrals are the same. Therefore we have the final result

Finally, the integral on the right can be written as an expectation:

This formulation of the Ziv-Zakai inequality makes it clear that the worst case scenario, from the EMSE persepctive, is when the minimum proabablity of error Pe(θ,~θ) on the classification task in Section 2 is significant for relatively large values of ∣∣~θ−θ∣∣. In the next section we will complete the circle by relating the Bayesian FI to performance on the classification task in Section 2 as measured by the average SI.

6 SI and the Bsyesian FIM

For the purposes of this section we will use the notation

If we introduce a binary random variable

We are interested in the limiting value of the conditional entropy as ~θ approaches θ. After some more simplification involving the definition of the likelihood ratio we can write the conditioal entropy for the task in Section 2 in the form

Note that only expectations under hypothesis H0 are needed to compute the conditional entropy, and hence the SI.

We also will use the following notation

where the prime on the far right indicates a derivative with respect to θ. Similarly we will write

This result is to be expected since, as a function of ~θ, the conditional entropy Ce(θ,~θ) is maximized when ~θ=θ.

Now we will look at second derivative terms. We define

We also will use the following notation

In order to ease the mental computations for the reader we note that, for any variable z that depends on θ, we have

Also note that we use

Now using the Liebniz rule for second derivatives we have the expansion C′′e(θ)=A+2B+C,where the terms on the right are given by

Since we have the Taylor expansion of the average conditional entropy for the task in Section 2:

Thus the Bayesian FI gives the lowest order approximation for the average conditional entropy when the task is detecting a small change in the parameter of interest.

The Ziv-Zakai inequality provides a relation between the MPE for the task of using the data vector g to detect a change in a parameter θ in the conditional PDF pr(g|θ), and the EMSE for the task of using g to estimate a parameter θ in the conditional PDF pr(g|θ). The van Trees inequality relates this EMSE the Bayesian FI. We have now found a relationship between the Bayesian FI and the average conditional entropy for the detection task. This completes the circle since there is an integral relation between the conditionaal entropy for any classification task and the MPE for the same task [12,13]. This reinforces the idea that there is a strong mathematical relationship between the performance of an imaging system on estimation tasks and the performance of the same system on the detection of a small change in the parameter of interest.

For athe vector version of this last result we assume a vector parameter θ and a perturbation in this parameter of the form tu, where u is a unit vector in parameter space. We then have a Taylor series expansion in the varaible t given by

where the ordinary FIM is defined by

There are vector versions of the van Trees inequality and the Ziv-Zakai inequality so the circle of relations between EMSE, MPE and Bayesian FIM also exists for vector parameters..

To get a Taylor series expansion for SI similar to the one we have derived for conditional entropy we must find the expansion for H(y). This function can be written in the form

Using notation similar to that in Section 5 we have

For the second derivative we can write H′′(θ)=a+2b+c, with

This gives us another relation beween the FI and the detection task in Section 2. The Taylor series expansion for I(θ,θ+△θ) now has the form

Thus the SI and the ideal-observer detectability are essentially the same FOM when we are trying to detect a small change in a parameter.

Thus the quantity ⟨F(θ)⟩θ also has an interpretation in terms of the average SI for the detection task in Section 2.

One of the useful results of this work is that Tsak-Based Shannon Information (TSI) for the detection of a small change in a parameter and the ideal-observer AUC for the same task at essentially equivalent figures of merit for a given imaging system. Optimizing asystem for one of these quantities will also optimoze it for the other. Another point of interest is that, when the parameter is a vector, the interpretation of the Bayesian Fisher Information Matrix in terms of Shannon Information does not require inversion of the matrix. This is similar to the connection betwee the Fisher Information Matrix and the ideal-observer AUC derived previously. Finally, both of these relations are the first terms iof a Taylor series expansion, and not inequalities as the Cramer-Rap Bound and the van Trees inequality are. They thus have the potential to provide good approximations to the relevant TSI or AUC values.