We initiate the study of Simultaneous Graph Embedding with Fixed Edges in the beyond planarity framework. In the QuaSEFE problem, we allow edge crossings, as long as each graph individually is drawn quasiplanar, that is, no three edges pairwise cross. We show that a triple consisting of two planar graphs and a tree admit a QuaSEFE. This result also implies that a pair consisting of a 1-planar graph and a planar graph admits a QuaSEFE. We show several other positive results for triples of planar graphs, in which certain structural properties for their common subgraphs are fulfilled. For the case in which simplicity is also required, we give a triple consisting of two quasiplanar graphs and a star that does not admit a QuaSEFE. Moreover, in contrast to the planar SEFE problem, we show that it is not always possible to obtain a QuaSEFE for two matchings if the quasiplanar drawing of one matching is fixed. 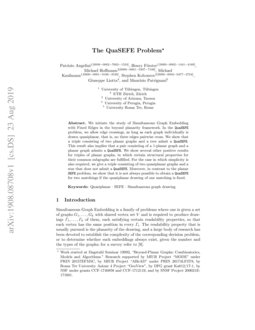 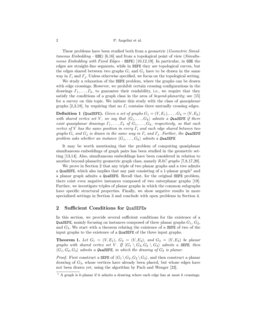 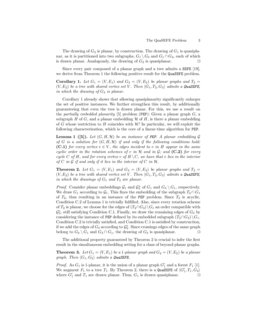 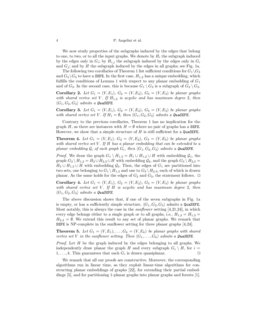 A graph is 1-planar if it can be drawn in the plane so that each edge is...
Franz J. Brandenburg, et al. ∙

We consider a certain tiling problem of a planar region in which there a...
Shizuo Kaji, et al. ∙

In this paper, we study fan-planar drawings that use h layers and are pr...
Therese Biedl, et al. ∙

Thickness and Antithickness of Graphs

The thickness of fan-planar graphs is at most three

We prove that in any strongly fan-planar drawing of a graph G the edges ...
Otfried Cheong, et al. ∙

Given a dynamic graph subject to insertions and deletions of edges, a na...
Jacob Holm, et al. ∙

(k,p)-Planarity: A Relaxation of Hybrid Planarity

Simultaneous Graph Embedding is a family of problems where one is given a set of graphs G1,…,Gk with shared vertex set V and is required to produce drawings Γ1,…,Γk of them, each satisfying certain readability properties, so that each vertex has the same position in every Γi. The readability property that is usually pursued is the planarity of the drawing, and a large body of research has been devoted to establish the complexity of the corresponding decision problem, or to determine whether such embeddings always exist, given the number and the types of the graphs; for a survey refer to [BKR13].

These problems have been studied both from a geometric (Geometric Simultaneous Embedding - GSE) [AGKN12, EGJPSS07] and from a topological point of view (Simultaneous Embedding with Fixed Edges - SEFE) [BR16, BCDEEIKLM07, DBLP:conf/gd/Frati06]. In particular, in GSE the edges are straight-line segments, while in SEFE they are topological curves, but the edges shared between two graphs Gi and Gj have to be drawn in the same way in Γi and Γj. Unless otherwise specified, we focus on the topological setting.

We study a relaxation of the SEFE problem, where the graphs can be drawn with edge crossings. However, we prohibit certain crossing configurations in the drawings Γ1,…,Γk, to guarantee their readability, i.e., we require that they satisfy the conditions of a graph class in the area of beyond-planarity; see [DBLP:journals/csur/DidimoLM19] for a survey on this topic. We initiate this study with the class of quasiplanar graphs [AT07, AgarwalAPPS97, FoxPS13], by requiring that no Γi contains three mutually crossing edges.

Given a set of graphs G1=(V,E1),…,Gk=(V,Ek) with shared vertex set V, we say that ⟨G1,…,Gk⟩ admits a QuaSEFE if there exist quasiplanar drawings Γ1,…,Γk of G1,…,Gk, respectively, so that each vertex of V has the same position in every Γi and each edge shared between two graphs Gi and Gj is drawn in the same way in Γi and Γj. Further, the QuaSEFE problem asks whether an instance ⟨G1,…,Gk⟩ admits a QuaSEFE.

We prove in Section 2 that any triple of two planar graphs and a tree admits a QuaSEFE, which also implies that any pair consisting of a 1-planar graph111A graph is k-planar if it admits a drawing where each edge has at most k crossings. and a planar graph admits a QuaSEFE. Recall that, for the original SEFE problem, there exist even negative instances composed of two outerplanar graphs [DBLP:conf/gd/Frati06]. Further, we investigate triples of planar graphs in which the common subgraphs have specific structural properties. Finally, we show negative results in more specialized settings in Section 3 and conclude with open problems in Section 4.

First construct a SEFE of ⟨G1∖G3,G2∖G3⟩, and then construct a planar drawing of G3, whose vertices have already been placed, but whose edges have not been drawn yet, using the algorithm by Pach and Wenger [PW01].

Since every pair composed of a planar graph and a tree admits a SEFE [DBLP:conf/gd/Frati06], we derive from Theorem 2.1 the following positive result for the QuaSEFE problem.

Corollary 1 already shows that allowing quasiplanarity significantly enlarges the set of positive instances. We further strengthen this result, by additionally guaranteeing that even the tree is drawn planar. For this, we use a result on the partially embedded planarity [ABFJKPR15] problem (PEP): Given a planar graph G, a subgraph H of G, and a planar embedding H of H, is there a planar embedding of G whose restriction to H coincides with H? In particular, we will exploit the following characterization, which is the core of a linear-time algorithm for PEP.

Let (G,H,H) be an instance of PEP. A planar embedding G of G is a solution for (G,H,H) if and only if the following conditions hold: (C.1) for every vertex v∈V, the edges incident to v in H appear in the same cyclic order in the rotation schemes of v in H and in G; and (C.2) for every cycle C of H, and for every vertex v of H∖C, we have that v lies in the interior of C in G if and only if it lies in the interior of C in H.

Consider planar embeddings G1 and G∗3 of G1 and G3∖G1, respectively. We draw G1 according to G1. This fixes the embedding of the subgraph T2∩G1 of T2, thus resulting in an instance of the PEP problem. Since T2 is acyclic, Condition C.2 of Lemma 1 is trivially fulfilled. Also, since every rotation scheme of T2 is planar, we choose for the edges of (T2∩G3)∖G1 an order compatible with G∗3, still satisfying Condition C.1. Finally, we draw the remaining edges of G3 by considering the instance of PEP defined by its embedded subgraph (T2∩G3)∖G1. Condition C.2 is trivially satisfied, and Condition C.1 is satisfied by construction, if we add the edges of G3 according to G∗3. Since crossings edges of the same graph belong to G3∖G1 and G3∩G1, the drawing of G3 is quasiplanar.

The additional property guaranteed by Theorem 2.2 is crucial to infer the first result in the simultaneous embedding setting for a class of beyond-planar graphs.

The following two corollaries of Theorem 2.1 list sufficient conditions for G1∖G3 and G2∖G3 to have a SEFE. In the first case, H1,2 has a unique embedding, which fulfills the conditions of Lemma 1 with respect to any planar embedding of G1 and of G2. In the second case, this is because G1∖G3 is a subgraph of G2∖G3.

Contrary to the previous corollaries, Theorem 2.1 has no implication for the graph H, as there are instances with H=∅ where no pair of graphs has a SEFE. However, we show that a simple structure of H is still sufficient for a QuaSEFE.

Let G1=(V,E1),…,Gk=(V,Ek) be planar graphs with shared vertex set V in the sunflower setting. Then ⟨G1,…,Gk⟩ admits a QuaSEFE.

Let H be the graph induced by the edges belonging to all graphs. We independently draw planar the graph H and every subgraph Gi∖H, for i=1,…,k. This guarantees that each Gi is drawn quasiplanar.

We remark that all our proofs are constructive. Moreover, the corresponding algorithms run in linear time, as they exploit linear-time algorithms for constructing planar embeddings of graphs [DBLP:journals/jacm/HopcroftT74], for extending their partial embeddings [ABFJKPR15], and for partitioning 1-planar graphs into planar graphs and forests [A14].

In this section we complement our positive results, by providing negative instances of the QuaSEFE problem in two specific settings. We start with a negative result about the existence of a simple QuaSEFE for two quasiplanar graphs and one star. Here simple means that a pair of independent edges in the same graph is allowed to cross at most once and a pair of adjacent edges in the same graph is not allowed to cross. Note that our algorithms in Section 2 may produce non-simple drawings. Also, the maximum number of edges in a quasiplanar graph with n vertices depends on whether simplicity is required or not [AT07].

The second special setting is the one in which one of the input graphs is already drawn in a quasiplanar way, and the goal is to draw the other input graphs so that the resulting simultaneous drawing is a QuaSEFE. This setting is motivated by the natural approach, for an instance ⟨G1,…,Gk⟩, of first constructing a solution for ⟨G1,…,Gk−1⟩ and then adding the remaining edges of Gk. Note that, since the drawing of the first graph partially fixes a drawing of the second graph, this can be seen as a version of the PEP problem for quasiplanarity.

For the original SEFE problem, this setting always has a solution when the graph that is already drawn (in a planar way) is a general planar graph, and the other graph is a tree [DBLP:conf/gd/Frati06]. In a surprising contrast, we construct negative instances for the QuaSEFE problem that are composed of two matchings only.

Let M1=(V,E1) and M2=(V,E2) be two matchings on the same vertex set V and let Γ1 be a quasiplanar drawing of M1. Instance ⟨M1,M2⟩ does not always admit a QuaSEFE in which the drawing of M1 is Γ1.

We initiated the study of simultaneous embeddability in the beyond planar setting, which is a fertile and almost unexplored research direction that promises to significantly enlarge the families of representable graphs when compared with the planar setting. We conclude the paper by listing a few open problems.