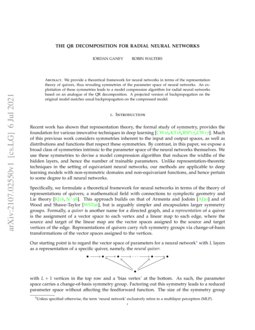 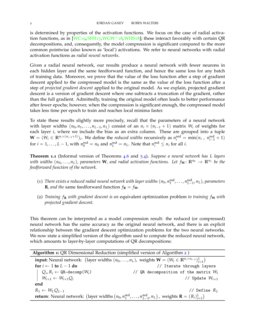 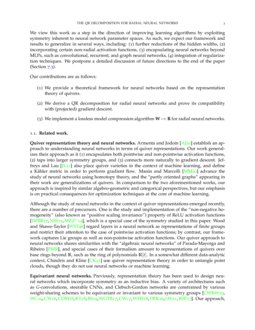 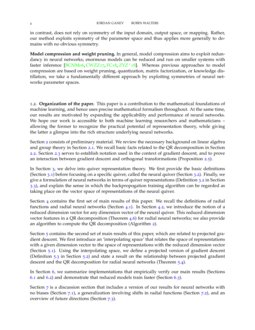 Recent work has shown that representation theory, the formal study of symmetry, provides the foundation for various innovative techniques in deep learning

[cohen2016group, kondor_generalization_2018, ravanbakhsh2017equivariance, cohen2016steerable]. Much of this previous work considers symmetries inherent to the input and output spaces, as well as distributions and functions that respect these symmetries. By contrast, in this paper, we expose a broad class of symmetries intrinsic to the parameter space of the neural networks themselves. We use these symmetries to devise a model compression algorithm that reduces the widths of the hidden layers, and hence the number of trainable parameters. Unlike representation-theoretic techniques in the setting of equivariant neural networks, our methods are applicable to deep learning models with non-symmetric domains and non-equivariant functions, and hence pertain to some degree to all neural networks.

Specifically, we formulate a theoretical framework for neural networks in terms of the theory of representations of quivers, a mathematical field with connections to symplectic geometry and Lie theory [kirillov2016quiver, nakajima1998quiver]. This approach builds on that of Armenta and Jodoin [armenta_representation_2020] and of Wood and Shawe-Taylor [wood_representation_1996], but is arguably simpler and encapsulates larger symmetry groups. Formally, a quiver is another name for a directed graph, and a representation

with L layers as a representation of a specific quiver, namely, the neural quiver:

vertices in the top row and a ‘bias vertex’ at the bottom. As such, the parameter space carries a change-of-basis symmetry group. Factoring out this symmetry leads to a reduced parameter space without affecting the feedforward function. The size of the symmetry group is determined by properties of the activation functions. We focus on the case of radial activation functions, as in

applied to the original model. As we explain, projected gradient descent is a version of gradient descent where one subtracts a truncation of the gradient, rather than the full gradient. Admittedly, training the original model often leads to better performance after fewer epochs; however, when the compression is significant enough, the compressed model takes less time per epoch to train and reaches local minima faster.

To state these results slightly more precisely, recall that the parameters of a neural network with layer widths (n0,n1,…,nL−1,nL) consist of an ni×(ni−1+1) matrix Wi of weights for each layer i, where we include the bias as an extra column. These are grouped into a tuple W=(Wi∈Rni×(ni−1+1))i. We define the reduced widths recursively as nredi=min(ni , nredi−1+1) for i=1,…,L−1, with nred0=n0 and nredL=nL. Note that nredi≤ni for all i.

Suppose a neural network has L layers with widths (n0,…,nL), parameters W, and radial activation functions. Let fW:Rn0→RnL be the feedforward function of the network.

This theorem can be interpreted as a model compression result: the reduced (or compressed) neural network has the same accuracy as the original neural network, and there is an explicit relationship between the gradient descent optimization problems for the two neural networks. We now state a simplified version of the algorithm used to compute the reduced neural network, which amounts to layer-by-layer computations of QR decompositions:

We view this work as a step in the direction of improving learning algorithms by exploiting symmetry inherent to neural network parameter spaces. As such, we expect our framework and results to generalize in several ways, including: (1) further reductions of the hidden widths, (2) incorporating certain non-radial activation functions, (3) encapsulating neural networks beyond MLPs, such as convolutional, recurrent, and graph neural networks, (4) integration of regularization techniques. We postpone a detailed discussion of future directions to the end of the paper (Section 4.3).

Armenta and Jodoin [armenta_representation_2020] establish an approach to understanding neural networks in terms of quiver representations. Our work generalizes their approach as it (1) encapsulates both pointwise and non-pointwise activation functions, (2) taps into larger symmetry groups, and (3) connects more naturally to gradient descent. Jeffreys and Lau [jeffreys_kahler_2021]

also place quiver varieties in the context of machine learning, and define a Kähler metric in order to perform gradient flow. Manin and Marcolli

[manin_homotopy_2020] advance the study of neural networks using homotopy theory, and the “partly oriented graphs” appearing in their work are generalizations of quivers. In comparison to the two aforementioned works, our approach is inspired by similar algebro-geometric and categorical perspectives, but our emphasis is on practical consequences for optimization techniques at the core of machine learning.

Although the study of neural networks in the context of quiver representations emerged recently, there are a number of precursors. One is the study and implementation of the “non-negative homogeneity” (also known as “positive scaling invariance”) property of ReLU activation functions

[dinh_sharp_2017, neyshabur_path-sgd_2015, meng_g-sgd_2019], which is a special case of the symmetry studied in this paper. Wood and Shawe-Taylor [wood_representation_1996] regard layers in a neural network as representations of finite groups and restrict their attention to the case of pointwise activation functions; by contrast, our framework captures Lie groups as well as non-pointwise activation functions. Our quiver approach to neural networks shares similarities with the “algebraic neural networks” of Parada-Mayorga and Ribeiro [parada-mayorga_algebraic_2020], and special cases of their formalism amount to representations of quivers over base rings beyond R, such as the ring of polynomials R[t]. In a somewhat different data-analytic context, Chindris and Kline [chindris_simultaneous_2021] use quiver representation theory in order to untangle point clouds, though they do not use neural networks or machine learning.

Previously, representation theory has been used to design neural networks which incorporate symmetry as an inductive bias. A variety of architectures such as G-convolutions, steerable CNNs, and Clebsch-Gordon networks are constrained by various weight-sharing schemes to be equivariant or invariant to various symmetry groups [cohen2019gauge, weiler_general_2019, cohen2016group, chidester2018rotation, kondor_generalization_2018, bao2019equivariant, worrall2017harmonic, cohen2016steerable, weiler2018learning, dieleman2016cyclic, lang2020wigner, ravanbakhsh2017equivariance]. Our approach, in contrast, does not rely on symmetry of the input domain, output space, or mapping. Rather, our method exploits symmetry of the parameter space and thus applies more generally to domains with no obvious symmetry.

In general, model compression aims to exploit redundancy in neural networks; enormous models can be reduced and run on smaller systems with faster inference [bucilua2006model, cheng2017survey, frankle2018lottery, zhang2018systematic]. Whereas previous approaches to model compression are based on weight pruning, quantization, matrix factorization, or knowledge distillation, we take a fundamentally different approach by exploiting symmetries of neural networks parameter spaces.

1.2. Organization of the paper

This paper is a contribution to the mathematical foundations of machine learning, and hence uses precise mathematical formalism throughout. At the same time, our results are motivated by expanding the applicability and performance of neural networks. We hope our work is accessible to both machine learning researchers and mathematicians – allowing the former to recognize the practical potential of representation theory, while giving the latter a glimpse into the rich structure underlying neural networks.

Section 2 consists of preliminary material. We review the necessary background on linear algebra and group theory in Section 2.1. We recall basic facts related to the QR decomposition in Section 2.2. Section LABEL:subsec:GD serves to establish notation used in the context of gradient descent, and to prove an interaction between gradient descent and orthogonal transformations (Proposition LABEL:prop:GD-orthtrans).

In Section 3, we summarize implementations that empirically verify our main results (Sections 3.1 and 3.2) and demonstrate that reduced models train faster (Section 3.3).

Section 4 is a discussion section that includes a version of our results for neural networks with no biases (Section 4.1), a generalization involving shifts in radial functions (Section 4.2), and an overview of future directions (Section 4.3).

Finally, in Appendix A, we include a formulation and generalization of our results using the language of category theory.

We would like to thank Avraham Aizenbud, Marco Antonio Armenta, Niklas Smedemark-Margulies, Jan-Willem van de Meent, and Rose Yu for insightful discussions, comments, and questions. Robin Walters is supported by a Postdoctoral Fellowship from the Roux Institute.

In this section, we first review basic notation and concepts from linear algebra, group theory, and representation theory. We then state a version of the QR decomposition. Finally, we formulate a definition of the gradient descent map with respect to a loss function. References include [Petersen12thematrix], [quarteroni_numerical_2007], and [dummit_abstract_2003].

For positive integers m and n, let Hom(Rm,Rn) or Rm×n denote the vector space of n by m matrices with entries in R, that is, the vector space of linear functions (also known as homomorphisms) from Rm to Rn. The general linear group GLn(R) consists of the set of invertible n by n matrices, with the operation of matrix multiplication. Equivalently, GLn(R) consists of all linear automorphisms of Rn, with the operation of composition. Such automorphisms are given precisely by change-of-basis transformations. The unit is the identity n by n matrix, denoted \rm idn. The orthogonal group O(n) is the subgroup of GLn(R) consisting of all matrices Q such that QTQ=\rm idn. Such a matrix is called an orthogonal transformation.

Let G be a group. An action (or representation) of G on the vector space Rn is the data of an invertible n by n matrix ρ(g) for every group element g∈G, such that (1) for all g,h∈G, the matrix ρ(gh) is the product of the matrices ρ(g) and ρ(h), and (2) for the identity element 1G∈G, we have ρ(1G)=\rm idn. In other words, an action amounts to a group homomorphism ρ:G→GLn(R). We often abbreviate ρ(g)(v) as simply g⋅v, for g∈G and v∈Rn. A function f:Rn→R (non-linear in general) is invariant for the action of G if f(g⋅v)=f(v) for all g∈G and v∈Rn.

The standard projection πn,m:Rn↠Rm onto the first m coordinates is defined as:

An affine map from Rm to Rn is one of the form x↦Ax+b for a n×m matrix A and a n-dimensional vector b. The set of affine maps from Rm to Rn can be identified with the vector space Hom(Rm+1,Rn), as we now explain. First, given A and b as above, we form the n×(m+1) matrix [b A]. Conversely, the affine map corresponding to W∈Hom(Rm+1,Rn) is given by

where \rm extm is defined as:

In this section, we recall the QR decomposition and note several relevant facts. For integers n and m, let Hom\rm upper(Rm,Rn) denote the vector space of upper triangular n by m matrices.

The following map is surjective:

In other words, any matrix can be written as the product of an orthogonal matrix and an upper-triangular matrix. When

m≤n, the last n−m rows of any matrix in Hom\rm upper(Rm,Rn) are zero, and the top m rows form an upper-triangular m by m matrix. These observations lead to the following special case of the QR decomposition:

We make some remarks: