The prediction distribution of a GARCH(1,1) process

This paper derives the analytic form of the h-step ahead prediction density of a GARCH(1,1) process under Gaussian innovations, with a possibly asymmetric news impact curve. The analytic form of the density is novel and improves on current methods based on approximations and simulations. The explicit form of the density permits to compute tail probabilities and functionals, such as expected shortfall, that measure risk when the underlying asset return is generated by a GARCH(1,1). The prediction densities are derived for any finite prediction horizon h. For the stationary case, as h increases the prediction density converges to a distribution with Pareto tails which whose form has been already described in the literature. The formulae in the paper characterize the degree of non-gaussianity of the prediction distribution, and the distance between the tails of the finite horizon prediction distribution and the ones of the stationary distribution. 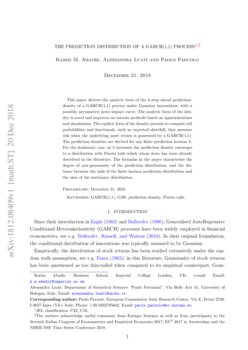 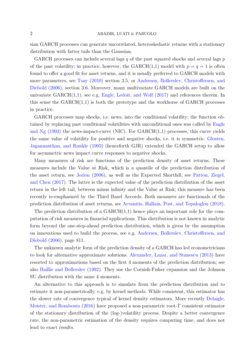 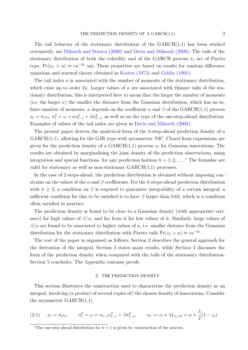 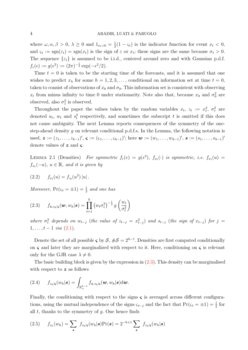 Since their introduction in Engle (1982) and Bollerslev (1986), Generalised AutoRegressive Conditional Heteroskedasticity (GARCH) processes have been widely employed in financial econometrics, see e.g. Bollerslev, Russell, and Watson (2010). In their original formulation, the conditional distribution of innovations was typically assumed to be Gaussian.

Empirically, the distribution of stock returns has been studied extensively under the random walk assumption, see e.g. Fama (1965); in this literature, Gaussianity of stock returns has been questioned as too thin-tailed when compared to its empirical counterpart. Gaussian GARCH processes can generate uncorrelated, heteroskedastic returns with a stationary distribution with fatter tails than the Gaussian.

GARCH processes can include several lags q of the past squared shocks and several lags p of the past volatility; in practice, however, the GARCH(1,1) model with p=q=1 is often found to offer a good fit for asset returns, and it is usually preferred to GARCH models with more parameters, see Tsay (2010) section 3.5, or Andersen, Bollerslev, Christoffersen, and Diebold (2006), section 3.6. Moreover, many multivariate GARCH models are built on the univariate GARCH(1,1), see e.g. Engle, Ledoit, and Wolf (2017) and references therein. In this sense the GARCH(1,1) is both the prototype and the workhorse of GARCH processes in practice.

GARCH processes map shocks, i.e. news, into the conditional volatility; the function obtained by replacing past conditional volatilities with unconditional ones was called by Engle and Ng (1993) the news-impact-curve (NIC). For GARCH(1,1) processes, this curve yields the same value of volatility for positive and negative shocks, i.e. it is symmetric. Glosten, Jagannanthan, and Runkle (1993) (henceforth GJR) extended the GARCH setup to allow for asymmetric news impact curve responses to negative shocks.

Jorion (2006), as well as the Expected Shortfall, see Patton, Ziegel, and Chen (2017). The latter is the expected value of the prediction distribution of the asset return in the left tail, between minus infinity and the Value at Risk; this measure has been recently re-emphasised by the Third Basel Accords. Both measures are functionals of the prediction distribution of asset returns, see Arvanitis, Hallam, Post, and Topaloglou (2018).

The prediction distribution of a GARCH(1,1) hence plays an important role for the computation of risk measures in financial applications. This distribution is not known in analytic form beyond the one-step-ahead prediction distribution, which is given by the assumption on innovations used to build the process, see e.g. Andersen, Bollerslev, Christoffersen, and Diebold (2006), page 811.

The unknown analytic form of the prediction density of a GARCH has led econometricians to look for alternative approximate solutions. Alexander, Lazar, and Stanescu (2013)

have resorted to approximations based on the first 4 moments of the prediction distribution; see also

Baillie and Bollerslev (1992). They use the Cornish-Fisher expansion and the Johnson SU distribution with the same 4 moments.

An alternative to this approach is to simulate from the prediction distribution and to estimate it non-parametrically, e.g. by kernel methods. While consistent, this estimator has the slower rate of convergence typical of kernel density estimators. More recently

Delaigle, Meister, and Rombouts (2016) have proposed a non-parametric root-T consistent estimator of the stationary distribution of the (log-)volatility process. Despite a better convergence rate, the non-parametric estimation of the density requires computing time, and does not lead to exact results.

The tail behavior of the stationary distribution of the GARCH(1,1) has been studied extensively, see Mikosch and Starica (2000) and Davis and Mikosch (2009). The tails of the stationary distribution of both the volatility and of the GARCH process xt are of Pareto type, Pr(xt>u)≈cu−2κ say. These properties are based on results for random difference equations and renewal theory obtained in Kesten (1973) and Goldie (1991).

) the smaller the distance from the Gaussian distribution, which has an infinite number of moments.

κ depends on the coefficient α and β of the GARCH(1,1) process xt=σtεt, σ2t=ω+αx2t−1+βσ2t−1, as well as on the type of the one-step-ahead distribution. Examples of values of the tail index are given in Davis and Mikosch (2009).

The present paper derives the analytical form of the h-step-ahead prediction density of a GARCH(1,1), allowing for the GJR type with asymmetric NIC. Closed form expressions are given for the prediction density of a GARCH(1,1) process xt for Gaussian innovations. The results are obtained by marginalizing the joint density of the prediction observations, using integration and special functions, for any prediction horizon h=1,2,….111The one-step ahead distribution for h=1 is given by construction of the process. The formulae are valid for stationary as well as non-stationary GARCH(1,1) processes.

β/α, and far from it for low values of it. Similarly, large values of β/α are found to be associated to higher values of κ, i.e. smaller distance from the Gaussian distribution for the stationary distribution with Pareto tails Pr(xt>u)≈cu−2κ.

The rest of the paper is organised as follows. Section 2 describes the general approach for the derivation of the integral. Section 3 states main results, while Section 4 discusses the form of the prediction density when compared with the tails of the stationary distribution. Section 5 concludes. The Appendix contains proofs.

This section illustrates the construction used to characterise the prediction density as an integral, involving (a product of several copies of) the chosen density of innovations. Consider the asymmetric GARCH(1,1)

Time t=0 is taken to be the starting time of the forecasts, and it is assumed that one wishes to predict xh for some h=1,2,3,…, conditional on information set at time t=0, taken to consist of observations of x0 and σ0. This information set is consistent with observing xt from minus infinity to time 0 under stationarity. Note also that, because x0 and σ20 are observed, also σ21 is observed.

Throughout the paper the values taken by the random variables

Denote the set of all possible ς by S, #S=2h−1. Densities are first computed conditionally on ς and later they are marginalized with respect to it. Here, conditioning on ς is relevant only for the GJR case λ≠0.

The basic building block is given by the expression in (2.3). This density can be marginalised with respect to z as follows

Finally, the conditioning with respect to the signs ς is averaged across different configurations, using the mutual independence of the signs ςt−j and the fact that Pr(ςt=±1)=12 for all t, thanks to the symmetry of g. One hence finds

The volatility process can also be written

For h≥2, σ2h has the following recursive expression in terms of y’s

with σ21=ω+βσ20+α0x20, which is measurable with respect to the information set at time 0. Moreover, one has

In Theorem 3.2 below, Ψ is the confluent hypergeometric function of the second kind, also known as Tricomi function, see Abadir (1999) and Gradshteyn and Ryzhik (2007), section 9.21, whose integral representation is,

with Re(a)>0,Re(c)>0. Moreover, the following notation is used in summations:

The line of proof of Theorem 3.2 is the following: for h=2 the integral is solved by substitution and by using equation (3.1). For h≥3, subsequent (negative) binomial expansions of expression (2.6) for σ2t are required, whose validity is ensured by the inequality

which is satisfied under Assumption 3.1, see Lemma 5.1 in the Appendix.

Immediate consequences of Theorem 3.2 are collected in the following corollary.

The prediction c.d.f.s of zh and xh are given by

Note that cm,s in the moments calculations are made of finite sums extending to m, involving the Tricomi functions, which do not fall in the logarithmic case as in Theorem 3.2; see Abadir (1999) for the logarithmic case. In fact, m−k∈{0,1,…,m} implies that

is a finite sum.

One can see that the prediction densities are more similar to a Gaussian when β/α is large.

The limit representation of the random variable xh in the stationary case can be found in Francq and Zakoian (2010) Theorem 2.1 page 24. The tail behaviour of the limit distribution is reviewed in Mikosch and Starica (2000) and Davis and Mikosch (2009). The tails of the stationary distribution of both the volatility and of the GARCH process xt are of Pareto type, Pr(xt>u)≈cu−2κ say, where κ>0 is a tail index. These properties are based on results for random difference equations and renewal theory obtained in Kesten (1973) and Goldie (1991).

The tail index of the stationary distribution depends on the coefficient α and β of the GARCH(1,1) process xt as well as on the one-step-ahead distribution. Examples of the tail index are given in Davis and Mikosch (2009); for Gaussian innovations, κ=14.1 for α=β=0.1, while κ=1 for α=1−β.

The index κ is the unique solution of E((αε2t+β)κ)=1. When κ is an integer, the expression simplifies to

see Davis and Mikosch (2009) eq. (10). Substituting the moments E(ε2nt) from the χ2 distribution, and assigning values to β/α over a grid of pre-specified values, one can solve (4.1) for β, and hence for α=(β/α)−1β. This allows to compute (values of) the surface κ(α,β). Figure 5 reports the level curves of κ(α,β) as a function of α and β obtained in this way. The figure also reports the lines where β/α is constant. It is seen that, for large values of β/α, κ and β/α increase roughly together. This association is not present for small values of β/α.

The relation between β/α and fat-tailedness of the prediction density for finite horizon h can be illustrated using the case h=2. From Theorem 3.2,

Hence in both the case of the prediction density for h=2 and the stationary distribution, the fat tailedness of the distributions is small for large values of β/α.

This paper presents the analytical form of the prediction density of a GARCH(1,1) process. This can be used to evaluate the probability of tail events or of quantities that may be of interest for value at risk calculations. This improves on approximation methods based on moments, or on Monte Carlo simulation and estimation.

The techniques in this paper can ge applied also with symmetric innovations density g(⋅) different from the N(0,1) one. Different densities imply distinct subsequent (negative) binomial expansions of expression (2.6) for σ2t, and different auxiliary convergence conditions on the GARCH coefficients, similarly to Assumption 3.1.

Consider fz,zh|ς(w,wh|s) from (2.3), and consider the transformation of from z to y. Observe that the domain of integration remains Rh−1+, that the inverse transformation is zt=βσ2tyt/αt, with Jacobian γh∏h−1t=1σ2t, where γh:=βh−1/(∏h−1t=1αt). Hence one finds

Next consider the case h=3, where