The Potential Benefits of Filtering Versus Hyper-Parameter Optimization 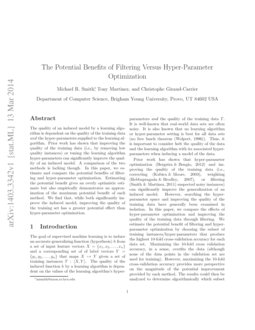 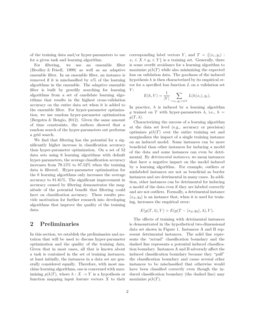 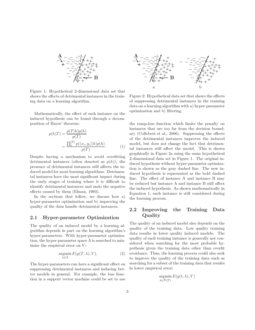 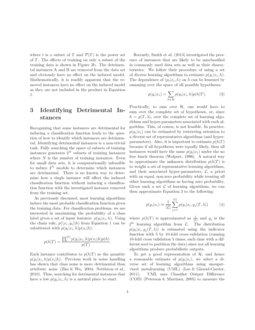 We introduce in this paper a learning paradigm in which the training dat...
Laurent Younes, et al. ∙

Towards Robust and Automatic Hyper-Parameter Tunning

from a set of input feature vectors

In this section, we establish the preliminaries and notation that will be used to discuss hyper-parameter optimization and the quality of the training data. Given that in most cases, all that is known about a task is contained in the set of training instances, at least initially, the instances in a data set are generally considered equally. Therefore, with most machine learning algorithms, one is concerned with maximizing p(h|T), where h:X→Y is a hypothesis or function mapping input feature vectors X to their corresponding label vectors Y, and T={(xi,yi):xi∈X∧yi∈Y} is a training set. Generally, there is some overfit avoidance for a learning algorithm to maximize p(h|T) while also minimizing the expected loss on validation data. The goodness of the induced hypothesis h

L on a validation set V:

In practice, h is induced by a learning algorithm g trained on T with hyper-parameters λ, i.e., h=g(T,λ).

Characterizing the success of a learning algorithm at the data set level (e.g., accuracy or precision) optimizes p(h|T) over the entire training set and marginalizes the impact of a single training instance on an induced model. Some instances can be more beneficial than other instances for inducing a model of the data and some instances can even be detrimental. By detrimental instances

, we mean instances that have a negative impact on the model induced by a learning algorithm. For example, outliers or mislabeled instances are not as beneficial as border instances and are detrimental in many cases. In addition, other instances can be detrimental for inducing a model of the data even if they are labeled correctly and are not outliers. Formally, a detrimental instance

⟨xd,yd⟩ is an instance that, when it is used for training, increases the empirical error:

Mathematically, the effect of each instance on the induced hypothesis can be found through a decomposition of Bayes’ theorem:

In the sections that follow, we discuss how a) hyper-parameter optimization and b) improving the quality of the data handle detrimental instances.

The hyper-parameters can have a significant effect on suppressing detrimental instances and inducing better models in general. For example, the loss function in a support vector machine could be set to use the ramp-loss function which limits the penalty on instances that are too far from the decision boundary

(Collobert et al., 2006). Suppressing the effects of the detrimental instances improves the induced model, but does not change the fact that detrimental instances still affect the model. This is shown graphically in Figure 2a using the same hypothetical 2-dimensional data set in Figure 1. The original induced hypothesis without hyper-parameter optimization is shown as the gray dashed line. The new induced hypothesis is represented as the bold dashed line. The effect of instance A and instance B may be reduced but instance A and instance B still affect the induced hypothesis. As shown mathematically in Equation 1, each instance is still considered during the learning process.

where t is a subset of T and P(T) is the power set of T. The effects of training on only a subset of the training data is shown in Figure 2b. The detrimental instances A and B are removed from the data set and obviously have no effect on the induced model. Mathematically, it is readily apparent that the removed instances have no effect on the induced model as they are not included in the product in Equation 1.

As previously discussed, most learning algorithms induce the most probable classification function given the training data. For classification problems, we are interested in maximizing the probability of a class label given a set of input features: p(yi|xi,h)

Each instance contributes to p(h|T) as the quantity p(yi|xi,h)p(xi|h). Previous work in noise handling has shown that class noise is more detrimental than attribute noise (Zhu & Wu, 2004; Nettleton et al., 2010). Thus, searching for detrimental instances that have a low p(yi|xi,h) is a natural place to start.

Recently, Smith et al. (2013) investigated the presence of instances that are likely to be misclassified in commonly used data sets as well as their characteristics. We follow their procedure of using a set of diverse learning algorithms to estimate p(yi|xi,h). The dependence of (pi|xi,h) on h can be lessened by summing over the space of all possible hypotheses:

Practically, to sum over H, one would have to sum over the complete set of hypotheses, or, since h=g(T,λ), over the complete set of learning algorithms and hyper-parameters associated with each algorithm. This, of course, is not feasible. In practice, p(yi|xi) can be estimated by restricting attention to a diverse set of representative algorithms (and hyper-parameters). Also, it is important to estimate p(h|T) because if all hypotheses were equally likely, then all instances would have the same p(yi|xi) under the no free lunch theorem (Wolpert, 1996). A natural way to approximate the unknown distribution p(h|T) is to weight a set of representative learning algorithms, and their associated hyper-parameters, L, a priori with an equal, non-zero probability while treating all other learning algorithms as having zero probability. Given such a set L of learning algorithms, we can then approximate Equation 3 to the following:

where p(h|T) is approximated as 1|L| and gj is the jth learning algorithm from L. The distribution p(yi|xi,gj(T,λ)) is estimated using the indicator function with 5 by 10-fold cross-validation (running 10-fold cross validation 5 times, each time with a different seed to partition the data) since not all learning algorithms produce probabilistic outputs.

The adaptive filtering approach overfits the data since the cross validation accuracy is maximized (all detrimental instances are included for evaluation). This allows us to find those instances that are actually detrimental in order to examine the effects that they can have on an induced model. Of course, this is not feasible in practical settings, but provides insight into the potential improvement gained from improving the quality of the training data.

In this section, we empirically compare the potential effects of filtering detrimental instances with those of hyper-parameter optimization. When comparing two learning algorithms, statistical significance is determined using the Wilcoxon signed-ranks test (Demšar, 2006) with an alpha value of 0.05. In addition to reporting the average classification accuracy, we also report two relative measures–the average percentage of reduction in error and the average percentage of reduction in accuracy, calculated as:

where bl(d) returns the baseline accuracy on data set d and g(d) returns the accuracy on data set d of the algorithm that we are interested in (i.e., filtering or hyper-parameter optimization). The percent reduction in error captures the fact that increasing the accuracy from 98% to 99% is more difficult than increasing the accuracy from 50% to 51%, which is not expressed in the average accuracy. Likewise, the percent reduction in accuracy captures the relative difference in loss of accuracy for the investigated method. We also show the number of times that g(d) is greater than, equal to, or less than bl(d) (count

For filtering using the ensemble (L-filter) and adaptive filtering, we use thresholds ϕ of 0.5, 0.3, and 0.1 to identify detrimental instances. The L-filter estimates p(yi|xi) using all of the learning algorithms in the set L (Table 1). The adaptive filter greedily constructs an ensemble to estimate p(yi|xi) for a specific data set/learning algorithm combination. The accuracy from the ϕ that produced the highest accuracy for each data set is reported.

To our knowledge, this is the first work that examines both filtering and hyper-parameter optimization in handling detrimental instances and compares their effects. Our work was motivated in part by Smith et al. (2013) who examined the existence of and characterization of instances that are hard to classify correctly. They found that a significant number of instances are hard to classify correctly and that the hardness of each instance is dependent on its relationship with the other instances in the training set as well as the learning algorithm used to induce a model of the data. Thus, there is a need for improving the way detrimental instances are handled during training as they affect the classification of the other instances in the data set.

Other previous work has examined improving the quality of the training data and hyper-parameter optimization in isolation. Frénay & Verleysen (2014) provide a survey of the current approaches for dealing with label noise in classification problems which often take the approach of improving the quality of the data. Improving the quality of the training data has typically fallen into three approaches: filtering, cleaning, and instance weighting. Each technique within an approach differs in how detrimental instances are identified. A common technique for filtering removes instances from a data set that are misclassified by a learning algorithm (Tomek, 1976) or an ensemble of learning algorithms (Brodley & Friedl, 1999). Removing the training instances that are suspected to be noise and/or outliers prior to training has the advantage that they do not influence the induced model and generally increase classification accuracy (Smith & Martinez, 2011)

. Training on a subset of the training data has also been observed to increase accuracy in active learning

A negative side-effect of filtering is that beneficial instances can also be discarded and produce a worse model than if all of the training data had been used (Smith & Martinez, 2014a). Rather than discarding the instances from a training set, one approach seeks to clean or correct instances that are noisy or possibly corrupted (Kubica & Moore, 2003). However, this could artificially corrupt valid instances. Weighting, on the other hand, weights suspected detrimental instances rather than discarding them (Rebbapragada & Brodley, 2007; Smith & Martinez, 2014b). Weighting the instances allows for an instance to be considered on a continuum of detrimentality rather than making a binary decision of an instance’s detrimentality. These approaches have the advantage that data is not discarded which is especially beneficial when data is scarce.

Much of the previous work has artificially inserted noise and/or corrupted instances into the initial data set to determine how well an approach would work in the presence of noisy or mislabeled instances. In some cases, a given approach only has a significant impact when there are large degrees of artificial noise. We show that correctly labeled, non-noisy instances can also be detrimental for inducing a model of the data and that properly handling them can result in significant gains in classification accuracy. Thus, in contrast to much previous work, we did not artificially corrupt a data set to create detrimental instances. Rather, we sought to identify the detrimental instances that are already contained in a data set.

One of the reasons that instance subset selection is overlooked is due to the fact that there is a large computational requirement to observe the relationship of an instance on the other instances in a data set. As such, determining which instances to filter is non-trivial. We hope that the results presented in this paper will provide motivation for furthering the work in improving the quality of the training data.