We study power control for an energy harvesting communication system with independent and identically distributed Bernoulli energy arrivals. It is assumed that the transmitter is equipped with a finite-sized rechargeable battery and is able to look ahead to observe a fixed number of future arrivals. A complete characterization is provided for the optimal power control policy that achieves the maximum long-term average throughput over an additive white Gaussian noise channel. 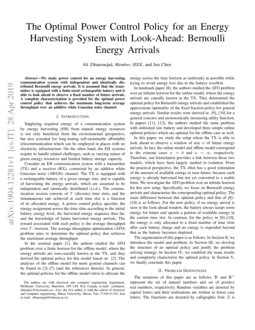 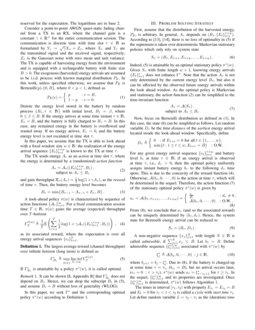 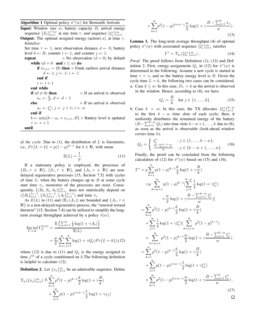 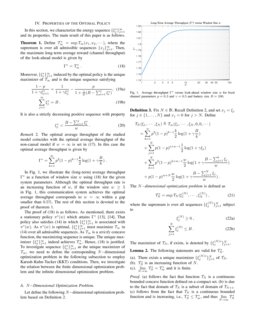 On Optimal Power Control for Energy Harvesting Communications with Lookahead

Supplying required energy of a communication system by energy harvesting (EH) from natural energy resources is not only beneficial from the environmental perspective, but also essential for long-lasting self-sustainable affordable telecommunication which can be employed in places with no electricity infrastructure. On the other hand, the EH systems require to handle related challenges, such as varying nature of green energy resources and limited battery storage capacity. Consider an EH communication system with a transmitter (TX) and a receiver (RX), connected by an additive white Gaussian noise (AWGN) channel. The TX is equipped with a rechargeable battery of a given storage size, and is capable of harvesting the energy arrivals, which are assumed to be independent and identically distributed (i.i.d.). The communication session consists of T (discrete) time slots, and the instantaneous rate achieved at each time slot is a function of its allocated energy. A power control policy specifies the energy assignment across the time slots according to the initial battery energy level, the harvested energy sequence thus far, and the knowledge of future harvested energy arrivals. The reward associated with each policy is the average throughput over T−horizon. The average throughput optimization (ATO) problem aims to determine the optimal policy that achieves the maximum average throughput. In the seminal paper [1], the authors studied the ATO problem over a finite horizon for the offline model, where the energy arrivals are non-causally known at the TX, and they derived the optimal policy for this model based on  [2]. The analyses of the offline model for more general channels can be found in [3, 4, 5, 6, 7] (and the references therein). In general, the optimal policies for the offline model strive to allocate the energy across the time horizon as uniformly as possible while trying to avoid energy loss due to the battery overflow. In landmark paper [8], the authors studied the ATO problem over an infinite horizon for the online model, where the energy arrivals are causally known at the TX. They determined the optimal policy for Bernoulli energy arrivals and established the approximate optimality of the fixed fraction policy for general energy arrivals. Similar results were derived in  [9, 10] for a general concave and monotonically increasing utility function. In papers [11, 12], the authors studied the same problem with unlimited size battery and developed three simple online optimal policies which are optimal for the offline case as well. In this paper, we study the setup where the TX is able to look ahead to observe a window of size w of future energy arrivals. In fact, the online model and offline model correspond to the extreme cases w=0 and w=∞

, respectively. Therefore, our formulation provides a link between these two models, which have been largely studied in isolation. From the practical perspective, the TX often has a good estimation of the amount of available energy in near future, because such energy is already harvested but not yet converted to a usable form. We investigate the ATO problem over an infinite horizon for this new setup. Specifically, we focus on Bernoulli energy arrivals and characterize the corresponding optimal policy. The main difference between this optimal policy and that of

[8, 9, 10] is as follows. For the new policy, if no energy arrival is seen in the look-ahead window, the battery always keeps some energy for future and spends a portion of available energy in the current time slot. In contrast, for the policy in [8, 9, 10], the energy is only allocated to a fixed number of time slots after each battery charge and no energy is expended beyond that as the battery becomes depleted. The organization of this paper is as follows. In Section II, we introduce the model and problem. In Section III, we develop the structure of an optimal policy and justify the problem solving strategy. In Section IV, we establish the main results and completely characterize the optimal policy. In Section V, we finally conclude this paper.

The notations of this paper are as follows. N and R+

E is reserved for the expectation. The logarithms are in base 2. Consider a point-to-point AWGN quasi-static fading channel from a TX to an RX, where the channel gain is a constant γ∈R+ for the entire communication session. The communication is discrete time with time slot τ∈N as formulated by Yτ=√γXτ+Zτ, where Xτ and Yτ are the transmitted signal and the received signal, respectively; Zτ

is the Gaussian noise with zero mean and unit variance. The TX is capable of harvesting energy from the environment and is equipped with a rechargeable battery with finite size

B>0. The exogenous (harvested) energy arrivals are assumed to be i.i.d. process with known marginal distribution PE. In this work, unless specified otherwise, we assume that PE is Bernoulli(p)-{0,B}, where 0<p<1, defined as

Denote the energy level stored in the battery by random process {Bτ,τ∈N} with initial level, B1=β, where 0≤β≤B. If the energy arrives at some time instant τ∈N, Eτ=B, and the battery is fully charged to Bτ=B. In this case, any remained energy in the battery is overflowed and wasted away. If no energy arrives, Eτ=0, and the battery energy level is not escalated at time slot τ. In this paper, we assume that the TX is able to look ahead with a fixed window size w∈N: the realization of the energy arrival sequence {Et}τ+wt=1 is known to the TX at time τ. The TX sends energy Aτ as an action at time slot τ, where the energy is determined by a (randomized) action function

and gain throughput Rτ(Aτ)=12log(1+γAτ), as the reward of time τ. Then, the battery energy level becomes

as its associated reward, where the expectation is over all energy arrival sequences {et}Tt=1.

If Γ∗B1 is attainable by a policy π∗(w), it is called optimal.

In this paper, we seek Γ∗ and the corresponding optimal policy π∗(w) according to Definition 1.

First, assume that the distribution of the harvested energy, PE, is arbitrary. In general, Aτ depends on (B1,{Et}τ+wt=1). According to [13, 14], there is no loss of optimality in (5) if the supremum is taken over deterministic Markovian stationary policies which only rely on system state

Indeed, (5) is attainable by an optimal stationary policy π∗(w). Given Sτ with finite length w+1, knowing energy arrivals {Et}τt=1 does not enhance Γ∗. Note that the action Aτ is not only determined by the current energy level Bτ, but also it can be affected by the observed future energy arrivals within the look ahead window. As the optimal policy is Markovian and stationary, the action function (2) can be simplified to the time-invariant function

Now, focus on Bernoulli distribution as defined in (

1). In this case, the state (6) can be simplified as follows. Let random variable Dτ be the time distance of the earliest energy arrival located inside the look-ahead window. Specifically, define

For any given energy arrival sequence {et}τ+wt=1 and battery level bτ at time τ∈N, if an energy arrival is observed at time τ, i.e., dτ>0, then the optimal policy uniformly assigns instant battery energy bτ to the following dτ time spots. This is due to the concavity of the reward function (4). Otherwise, A(bτ,0,⋯,0) is the action at time τ, which will be determined in the sequel. Therefore, the action function (7) of the stationary optimal policy π∗(w) is given by

From (8), we conclude that aτ (and so the associated reward) can be uniquely determined by (bτ,dτ). Hence, the system state for Bernoulli energy arrival can be reduced to

where (12) is due to (11) and Qj is the energy assigned to time jth of a cycle conditioned on k.The following definition is helpful to calculate (12).

The proof follows from Definition (1), (12) and Definition 2. First, energy assignments Qj in (12) for π∗(w) is determined in the following. Assume a new cycle is started at time τ=τ1 and so the battery energy level is B. Given the cycle time L=k, the following two cases can be considered.

In this section, we characterize the energy sequence {ξ∗j}∞j=1 and its properties. The main result of this paper is as follows.

Define T∗∞=supT∞(x1,x2,⋯), where the supremum is over all admissible sequences {xj}∞j=1. Then, the maximum long-term average reward (channel throughput) of the look-ahead model is given by

It is also a strictly decreasing positive sequence with property

In Fig. 1, we illustrate the (long-term) average throughput Γ∗ as a function of window size w using (18) for the given system parameters. Although the optimal throughput rate is an increasing function of w, if the window size w≥5 in Fig. 1, this communication system achieves the optimal average throughput corresponds to w=∞ within a gap smaller than 0.5%. The rest of this section is devoted to the proof of theorem 1. The proof of (18) is as follows. As mentioned, there exists a stationary policy π∗(w) which attains Γ∗ [13, 14]. That policy also satisfies (14) in which {ξ∗j}∞j=1 is associated with π∗(w). As π∗(w) is optimal, {ξ∗j}∞j=1 must maximize T∞ in (14) over all admissible sequences. As T∞ is a strictly concave function, the maximizing sequence is unique. The unique maximizer {ξ∗j}∞j=1 indeed achieves T∗∞. Hence, (18) is justified. To investigate sequence {ξ∗j}∞j=1 as the unique maximizer of T∞, we need to define the corresponding N−dimensional optimization problem in the following subsection to employ Karush-Kuhn-Tucker (KKT) conditions. Then, we investigate the relation between the finite dimensional optimization problem and the infinite dimensional optimization problem.

Let define the following N−dimensional optimization problem based on Definition 2.

The N−dimensional optimization problem is defined as

The following statements are valid for T∗N.

In Corollary 2 in the sequel, we will prove that T∗N is indeed a strictly increasing function, which is stronger than Lemma 2-part(B). The N-dimensional optimization problem can be solved by the KKT method. A necessary and sufficient condition for sequence {ξ(N)∗j}Nj=1 to attain T∗N is to satisfy

In this subsection, we investigate the properties of the sequence {ξ(N)∗j}Nj=1 which achieves T∗N based on the KKT conditions (24).

The effective length of sequence {ξ(N)∗j}Nj=1 is N.

First, we show that there exists at least one non-zero elements in the sequence of {ξ(N)∗j}Nj=1. Assume that this claim is not valid, and an all zero sequence is the optimal solution which satisfies the KKT conditions (24). Thus,

However, this equation is only valid when ξN≥γwB>0 due to B>0. This inequality contradicts with (27). Consequently, the largest (time) index of the non-zero element (J) exists with property (25). Second, we prove that J<N is not valid in the following. Suppose J<N. Define B′=∑Jj=1ξ(N)∗j. Note that we have

T∗N is a strictly increasing function of N.

where inequality holds in the strict sense for j<N.

From Corollary 1 and Lemma 4, we conclude that

In the following lemma, we investigate the behaviour of sequence {ξ(N)∗j}Nj=1 as a function of time index j when N is fixed.